Faster With Finnegan Featuring Finnegan, Newbern, and Cotten Comes to the MotorTrend App!

What it Takes to Make a Beater Faster, Cheaper Want to go fast? Want to do it cheap? On Faster with Finnegan, Mike Finnegan and his friends show you the secrets behind making Roadkill-esque heaps into truly raceable junk! Sign up to the MotorTrend App while the deal of the year is still going on!
Feature on Mike Cotten's 1980 Chevrolet C-10
Cotten's C-10 is one of the Nation's Best Project Trucks
Finnegan's C-10 is one of the Nation's Best Project Trucks
Q & A with Mike Finnegan when he was editor of Sport Truck magazine
Faster with Finnegan, an all-new weekly series from the world of Roadkill, streams exclusively on the MotorTrend App on January 15, 2020. This is one of the first new weekly series for 2020; Roadkill Garage and Roadkill's Junkyard Gold are also going weekly in 2020. The title basically gives it away—to go faster. And if you recall the shenanigans of Roadkill, which you probably most associate Finnegan with, you better believe the goal is to make beat-up vehicles go faster on a tight budget. Faster With Finnegan features—you guessed it—Mike Finnegan along with David Newbern (partner in Finnegan's Garage) and Mike Cotten (owner of Midwest Images). Join the group of guys as they collaborate on the best way to build a better beater on a tight timeframe and even tighter budget.

View Photo Gallery | 10 Photos
Photo 2/10   |   Faster With Finnegan Logo Key Art
Here's how Faster With Finnegan works. The show opens with Finnegan introducing a vehicle he's purchased. His goal is to make it faster. Here's the catch: he's going to race it somehow against someone. We join Finnegan in finding out what kind of racing he's going to do (drag racing, autocross, etc. ), the competitor he's up against (celebrity, pro driver, etc. ), and the vehicle his competitor is driving. Next, Finnegan figures out if his purchase will even be competitive as his competitor sets a baseline time to beat. Then, Finnegan, Cotton, and Newbern hit the shop to modify Finnegan's junk over the next few days on an average joe's budget. Lastly, Finnegan and crew race their competitor to see if their modifications make the heap faster and more competitive. Finnegan closes the episode with some final thoughts. It's all in good fun, and along with seeing what Finnegan builds, we'll get to see what the competition brings.
You better believe there are some trucks in Faster With Finnegan. We won't spill all the beans (or tell you which vehicle Finnegan wrecks), but the series premier features a 1985 GMC mini truck that at least produces a wicked burnout. A few episodes later, we know there's a mud park and a big 'ol Chevy K5 Blazer involved, and on another episode, we may see a big-block Toyota mud truck.
Watch Faster with Finnegan on January 15 only on the MotorTrend App, the #1 automotive streaming service dedicated to the motoring world, where you can stream favorites like Roadkill, Roadkill Garage, Roadkill's Junkyard Gold, Roadkill Extra, Top Gear, Diesel Brothers, Fast N' Loud, FourWheeler, Texas Metal, and Top Gear America (coming soon). 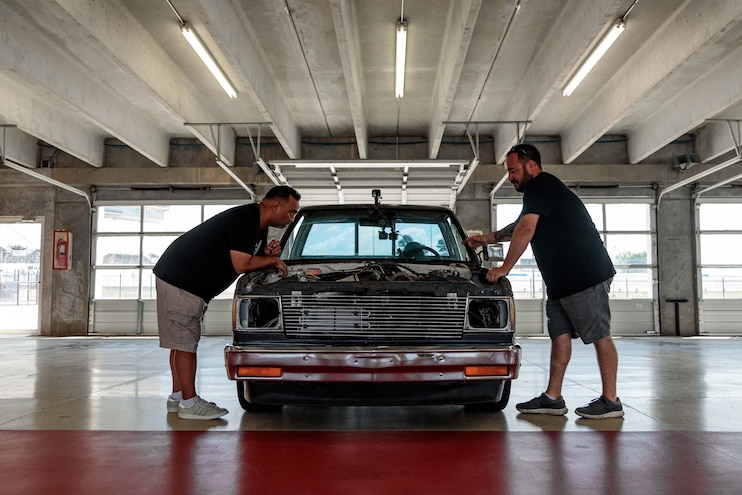 - OF
By Monica Gonderman
624 Articles