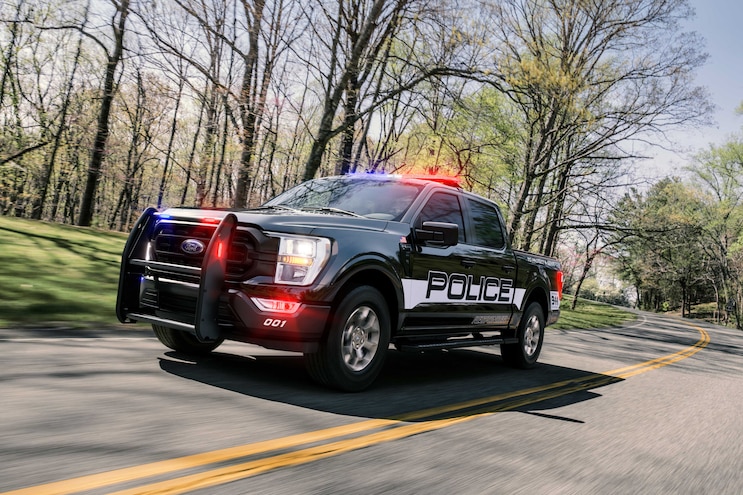 The 2021 Ford F-150 Police Responder is built on the company's Super Crew platform and is offered only in four-wheel drive and with the 3.5L EcoBoost V-6 engine. The F-150 Police Responder's 3.5 V-6 engine produces 400 hp and 500 lb-ft of torque, which is the most torque of all pursuit-rated vehicles. The EcoBoost engine is backed by a 10-speed automatic transmission and a torque-on-demand transfercase with a four-wheel drive auto mode.

"Four-Auto mode bridges the gap between 2-High and 4-High, and you see performance improvements as a result," said Allen Magolan, Ford police vehicles integration manager. "On dry pavement is where you see the real payoff, because it allows you to carry more speed when cornering, which is a rare benefit in a pickup truck."

Meeting the requirements to be pursuit-rated is no easy task. To earn this rating, vehicles need to pass a litany of trials, which center around performance and handling characteristics. While requirements vary from agency to agency, Ford has equipped the F-150 Police Responder to easily meet the needs of most agencies. The F-150 Police Responder has an electronically limited 120 mph top speed, which is about 13 mph greater than the limit of standard F-150 pickups. The F-150 Police Responder also wears unique LT265/70R18 Goodyear Wrangler Enforcer tires. These tires from Goodyear are the only all-terrain offerings to be available on a pursuit-rated vehicle. The tires need to be able to handle quick acceleration, extended durations at high speeds, aggressive cornering on pavement, and still be able to manage off-road travel.

"Whether suburban police departments, border patrol agents, or rural sheriffs, officers never know where the job might take them, but the all-new F-150 Police Responder provides a pickup truck option engineered to get them there faster and with greater agility than ever before."

Standard towing capacity for the 2021 Ford F-150 Police Responder is 7,000 pounds, which is the most of any pursuit-rated police vehicle. For departments that need a bit more, the trucks can be outfitted to bump that number up to a maximum capacity of 11,200 pounds. For comparison, a comparable standard F-150 in this configuration can tow a maximum of 13,900 pounds. Also available are Ford's Pro Trailer Backup Assist, trailer reverse guidance, and an integrated trailer brake controller. Payload capacity maxes out at 2,030 pounds. And while the truck is pursuit-rated, most trailers are not so Ford cautions against towing during patrol or pursuit duties. 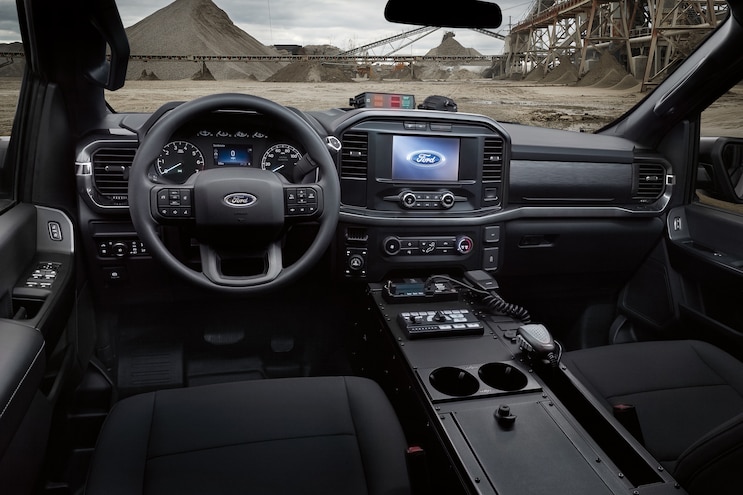 Built with the needs of police officers in mind, the Ford F-150 Police Responder features a new Police Engine Idle function. This feature allows officers to, at the push of a button, remove the ignition key while leaving the vehicle running to power lights, sirens, and communication equipment without the worry of someone driving off with the truck. The F-150 Police Responder has more passenger volume and more head-, hip-, and shoulder room than any other pursuit-rated offering. Front seats are offered with side bolsters designed to accommodate an officer wearing a duty belt and optimized for comfort during a long shift. Built-in steel intrusion panels are found in the front seat backs for officer safety and the interior is darker in color and features heavier-duty fabrics, so there's less worry about spilled coffee.

The 2021 Ford F-150 Police Responder will be assembled at Ford's Kansas City assembly plant and will arrive in fleets in the fall of 2021.