Bold and aggressive styling brings Ridgeline back to the forefront of the midsize class. 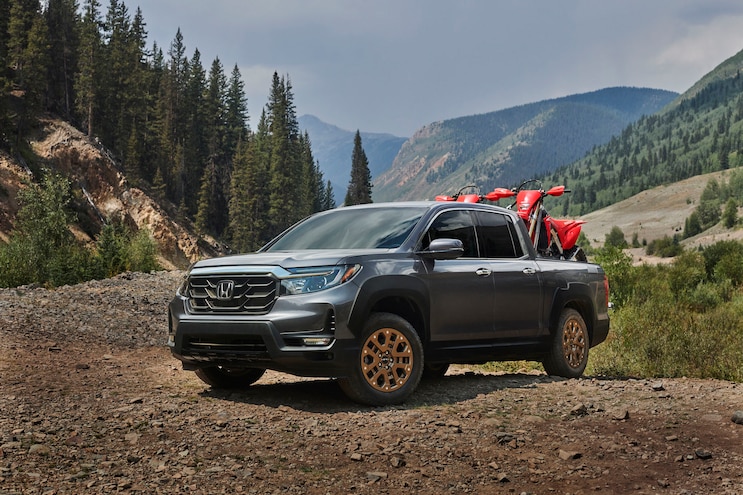 Honda rocked the truck world when it introduced the all-new 2006 Ridgeline. A first for the midsize pickup class, the Ridgeline featured a unibody design with fully independent suspension. Honda offered its new pickup with a V-6 engine, automatic transmission, and available all-wheel drive. We deemed the truck so good, in fact, that it won MotorTrend's Truck of the Year award along with North American Truck of the Year.

Fast-forward a few years to 2017, and Honda once again shook things up by bringing to market an all-new second-generation Ridgeline. This time the Ridgeline shared most of its underpinnings with the company's Pilot SUV, though Honda kept the familiar recipe of a V-6 engine, automatic transmission, and available all-wheel drive. Ridgeline again scooped up a pile of awards, including North American Truck of the Year.

Despite its great fuel economy, comfortable cabin, and exceptional capability, the Ridgeline has had one nagging issue. In a sea of rough and tumble pickups, the Ridgeline appeared a bit soft. In sharing much of its chassis with the Pilot, the second-generation Ridgeline also shared a majority its of sheetmetal from the A-pillar forward. This gave the truck a sleek look with excellent forward visibility. While this works great for the family-hauling SUV market, it doesn't translate as well for buyers who tend to overlook capability in favor what's going to make them look and feel cool when they pull into the parking lot. Afterall, truck buying is just as much an emotional purchase as it is a practical one. 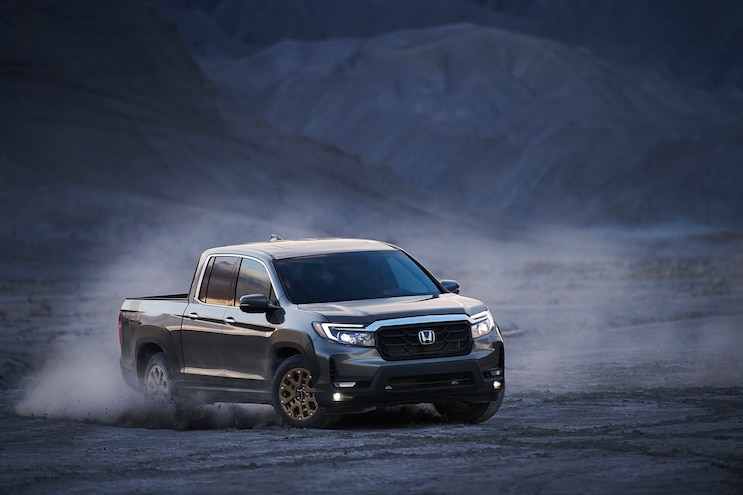 To address this issue, Honda has embarked upon a fairly aggressive midcycle refresh for the 2021 Ridgeline. Instead of the usual change to plastic bits, paint colors, and wheels, Honda has gone and updated all of the truck's sheetmetal from the A-pillar forward. These changes include a new hood with a pronounced power bulge, new front fenders that work to emphasize the more squared -ff nose, new grilles, and a new front bumper. Atop the grille is a bar (black on Sport trims and Black Edition, and chrome on RTL and RTL-E) that bisects the LED headlights that flank it on each side. The new front bumper also incorporates side vents that create aerodynamic air curtains. Finally, the truck's body color now extends farther down the bumper where a prominent front skidplate punctuates the Ridgeline's tough new look.

Around back, a reshaped rear bumper makes room for Ridgeline's new dual exhaust outlets. All trims now feature new, more aggressive-looking 18-inch wheels. Wheel backspacing has been reduced by 10mm, which gives the 2021 Ridgeline a 20mm (3/4 of an inch) wider stance. Even Ridgeline's all-terrain tire sidewall and shoulder design has been improved.

Still not aggressive enough for you? Well, for 2021 buyers can now add the HPD (Honda Performance Division) package to all trim levels. The HPD package brings with it a unique grille, black fender flares, bronze-colored wheels, and unique HPD graphics. The HPD package is one of four new option groups that will also include Utility, Function, and Function+ packages. 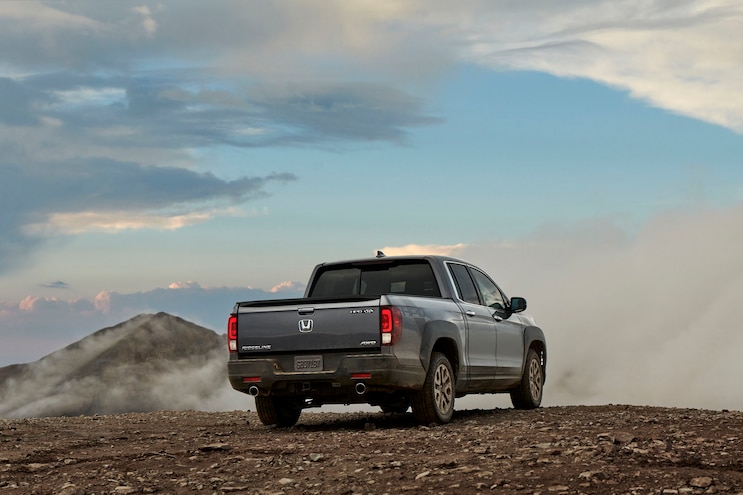 The interior wasn't left out of this refresh, either. Inside, Ridgeline receives an updated audio display system with cleaner graphics, faster speeds, and easier-to-navigate icons. Best of all, a physical volume knob has been added. Sport trim gets new cloth seat inserts, and all trims receive new contrast stitching. Sport, RTL, and RTL-E also receive new dash, steering wheel, and center console accents.

For the 2021 model year Ridgeline retains all the rest of what makes it special. A 3.5L V-6 engine is standard, which produces 280 hp and 262 lb-ft of torque. Backing the engine is a nine-speed automatic transmission. Available on Sport and RTL, and standard on RTL-E and Black Edition is Honda's fantastic i-VTM4 torque-vectoring all-wheel-drive system. Ridgeline boasts a best-in-class all-wheel-drive payload rating of 1,580 pounds and can tow up to 5,000 pounds. And fret not, the in-bed trunk and dual-action tailgate remain standard.

We're excited for this latest Ridgeline refresh from Honda. What was already a very capable and comfortable pickup now has the bold and aggressive styling necessary to take on the competitive midsize truck market head first and grapple with the big players.