The Bronco has a history with Baja racing, so it's a perfect canvas for Ford's Baja-ready Raptor off-road treatment. 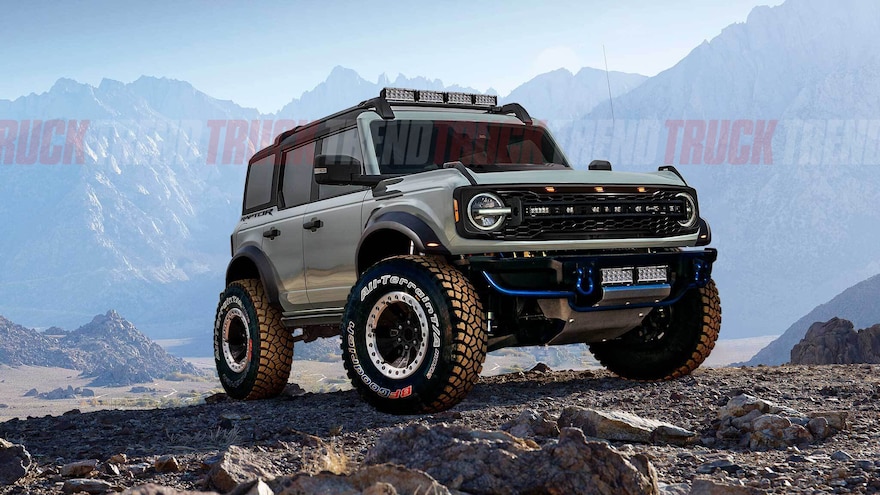 The newest Ford Bronco is a rugged piece, with body-on-frame construction and plenty of hardcore off-road hardware available throughout the lineup—but Ford won't stop there. It's almost a given that the automaker will roll out an even more muscular Bronco Raptor trim to take the top spot in the new Bronco family's trim hierarchy. Look for the Bronco Raptor to serve as a smaller sibling to the soon-to-be-replaced full-size F-150 Raptor off-road pickup. Seeing as how the Bronco has a history of running (and winning) the famed Baja off-road race, the high-speed desert-racer Raptor treatment is arguably a more appropriate trim for the newest Ford SUV than its big pickup. So, what can we expect from the Ford Bronco Raptor?

What Is a Ford Bronco Raptor?

Unlike the regular Ford Bronco's off-road-enhanced trim levels, such as the Black Diamond and Badlands, which are geared toward traditional rock crawling and clod-busting, the Raptor has a higher-speed mission. The closest Bronco that Ford's shown may be the Wildtrak model, but the Raptor will take that trim's abilities to the next level. Expect reworked suspension components designed for plenty of wheel travel and high-speed bump absorption—basically, the chassis will be set up to perform Baja racing-that ought to allow the Bronco Raptor to bound across the open desert. There also will be a more powerful, likely larger, engine option than the twin-turbocharged 2.7-liter EcoBoost V-6 that tops the run-of-the-mill Bronco's engine lineup.
Besides the idea of a Baja-style factory Ford Bronco seeming very cool, Ford has plenty of reason to yank the Bronco in this direction. Jeep is reportedly expanding its Mojave off-road treatment from the Gladiator pickup truck to the Wrangler SUV, thus dropping a desert-runner into its direct cage-match with the Bronco. Furthermore, Jeep teased a new V-8-powered Wrangler 4x4 the very day Ford debuted the 2021 Bronco. Besides trolling Ford pretty hard, the move practically forces Ford to consider a higher-output, more performance-focused Bronco to match.

We've taken a stab at rendering what the Ford Bronco Raptor might look like, using the current F-150 Raptor's styling, as well as informed guesswork, as a baseline. The basics are this: The Raptor-fied Bronco will have more aggressively flared fenders with more clearance for what are expected to be standard 35- or 37-inch off-road tires; a lifted suspension for more ground clearance; a burlier steel front bumper with—again—more clearance; heavy-duty skid plates protecting the likes of the powertrain, gas tank, and suspension components; and possibly a large power dome on its hood. We also festooned the Bronco Raptor in the illustration above with Rigid Industries LED auxiliary lights, mostly because we thought the lamps looked sweet.
Part of what makes guessing the Bronco Raptor's appearance so difficult is how wild the 2021 Ford Bronco looks out of the box. Just look at the regular Bronco with the Sasquatch package, or the Wildtrak and Badlands trims—both come with beadlock-style wheels, 35-inch tires, and aggro suspension mods. Those trims' wheels and tires also stick out prone of the fenders, giving the SUV an aftermarket-looking appearance from the factory. The Raptor surely will build on this foundation, but how far can Ford go while complying with safety regulations and other fun-killers without simply selling a street-friendly version of the Bronco R—the tube-frame racing version of the Bronco? That we figured the muscular-looking Broncos in these early spy photos were Raptors should speak volumes to how aggro the non-Raptor Broncos can look; from what we can tell, the vehicle we spied may merely be a Sasquatch-equipped Bronco prototype.

What Engine Will the Ford Bronco Raptor Come With?

The basic Ford Bronco comes with a turbocharged 2.3-liter four-cylinder engine shared with the Ranger pickup. It mates to either a seven-speed manual transmission or a 10-speed automatic. Buyers can upgrade to a twin-turbo 2.7-liter V-6, which comes only with the automatic. Every Bronco features standard four-wheel drive, but we expect both the Bronco Raptor's engine and four-wheel-drive system to go above and beyond the setups found in lesser Broncos.
Starting under the hood, we anticipate the Bronco Raptor will either use a fortified version of the standard SUV's 2.7-liter V-6 or a larger 3.0-liter unit found elsewhere in the Ford stable. Horsepower figures for even the regular Bronco are forthcoming, but based on what the SUV's engines produce in other applications, expect about 270 hp from the 2.3-liter four-cylinder engine and around 325 hp from the 2.7-liter V-6. As such, whatever engine ends up under the Raptor's boxy hood likely will spit out at least 350 horses—and we think 400 hp isn't out of the question. Really want something to look forward to? There is a slim, outside chance Ford installs the bigger 3.5-liter EcoBoost V-6 (which makes as little as 375 and as much as 450 hp in the F-150) or a naturally aspirated 395-hp 5.0-liter V-8 under the Bronco Raptor's hood.
Expect every Raptor to come with Ford's 10-speed automatic transmission—we doubt the seven-speed manual transmission will make the cut.

. . . And What About the Ford Bronco Raptor's Suspension?

Ah, the suspension, where most of the Raptor magic is derived. As on the larger F-150 Raptor, look for the Bronco Raptor to benefit from a lift kit, heavier-duty suspension components (front control arms, rear axle, and links), wider front and rear tracks, and—most critically—a set of Fox shocks. We figure the Raptor will use 2.5-inch-or-larger internal-bypass Fox-supplied units, which will offer appropriate damping and cooling for the rapid-cycle use endemic to Baja-style terrain. (Think of the wheels bouncing up and down constantly, as the Bronco hits dips, rocks, and undulations at highway speeds—such abuse can quickly fry normal shocks and rattle and bang on less burly suspension components like cannon fire.) Look for beadlock-capable wheels at all four corners—likely wrapped in BFGoodrich all-terrain tires (probably from the brand's KO2 line).

When Is the Ford Bronco Raptor Coming?

Ford is staying mum on timing for the Bronco Raptor—and, in fact, it hasn't officially acknowledged such a vehicle is on its way. The thing is, the Ranger pickup that the Bronco shares some bones with offers a Raptor model globally, and the F-150 Raptor brand continues to gain marketing strength in the United States. We figure a Raptor variant will follow the Bronco to market by a model year, meaning Ford will likely pull the wraps off the model next year and bring it to market as a 2022 model.

- OF
By Alexander Stoklosa
4 Articles