Our best look yet at the forthcoming electric Hummer models. 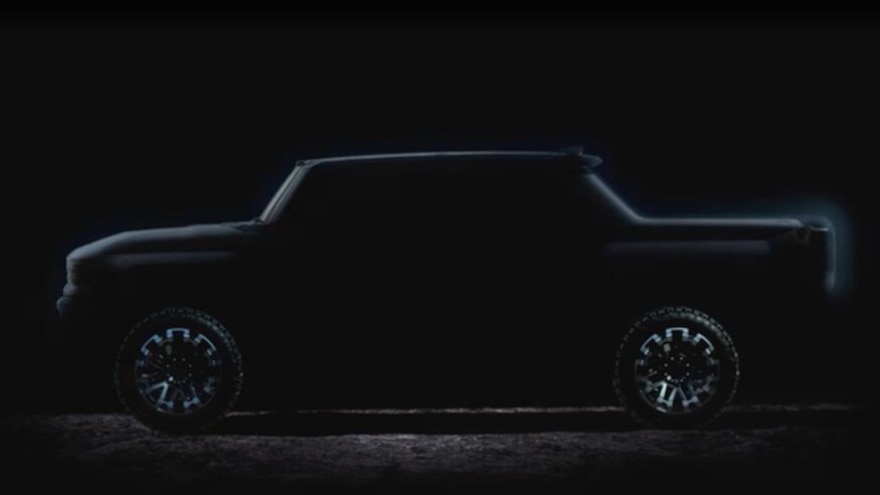 We're starting to get a fuller picture of what the new GMC Hummer line of electric trucks and SUVs will look like, as well as what features the two vehicles will pack—although the latest teaser video raises more questions than it answers. What's "Crab mode?" We can make some educated guesses, but we're assuming it doesn't involve a bib, warm butter, and some cut lemons.

Let's start with the truck's profile, which clearly resembles its chunky ancestors—particularly the Hummer H2 SUT, although there are some significant styling differences. For one, the still-small bed looks longer. The C-pillars rake more toward the vehicle's front, too. And instead of a "cowl" surrounding the rear window, as on the H2 SUT, there's more of an overhanging roof lip or spoiler. That said, there are more similarities than differences. The hood has a decided cant at the front, invoking the slanted hood of the H2. It's unmistakably a Hummer, but it's an evolution of existing themes.

The SUV variant is much more traditional in its profile, looking a bit like the cult classic Toyota FJ Cruiser in these heavily shadowed images. The roofline and rear quarter appears softer than the hard-edged H2 SUV of yore, and the roofline appears lower. There's a hint of more tumblehome on the forthcoming EV SUV than the slab-sided H2, and there's a rear-mounted full-size spare tire that reminds us of the units found on the Jeep Wrangler and the new 2021 Ford Bronco. The clay model seen in the teaser video also shows beefy front bumpers with sizable recovery shackles, a further sign that the new-age Hummer is serious about its off-road credentials.

What's under the hood? Well, we finally have our first taste of hard specs for the EV powertrain. GMC claims the new Hummer pumps out 1,000 horsepower and "11,500" pound-feet of torque. The first number is impressive and understandable. The second number takes some interpretation. EVs produce a lot of torque, but not that much by conventional measures (at the crank, for an internal combustion engine). This number looks like it is measured after the influence of wheel size and reduction gearing, giving it a very inflated (and frankly, misleading) appearance. We have no doubt the Hummer EV will be torquey, and mighty impressive by conventional measurement, we just wish automakers wouldn't use such inflated figures. It's confusing.

Whatever the torque figure actually is, GMC claims the Hummer EV will hit 60 mph in 3.0 seconds. That's quick for a brick with wheels.

Lastly, there are a number of features that GMC name drops in the teaser but doesn't elaborate on. Adrenaline mode sounds like a high-performance driving mode, Crab mode seems like a four-wheel steering or "tank turn" function. Honestly, though, we're just pulling at strings here. Likewise, we'll be interested to hear more about the next-generation Super Cruise driver-assist system, as well as the "Ultra-Vision" cameras that surely assist the feature. GMC also claims that the Hummer EV will benefit from the company's new Ultium battery technology, a joint venture between GM and LG Chem of South Korea.

While there are some questions left to be answered, we won't have to wait too long. GM notes we'll see the new Hummer EV in the fall of 2020, and it'll enter production a year later. Stay tuned.

- OF
By Alex Kierstein
2 Articles