Inside And Out, This New Truck Is Packed With Comfort, Capability, and Technology. 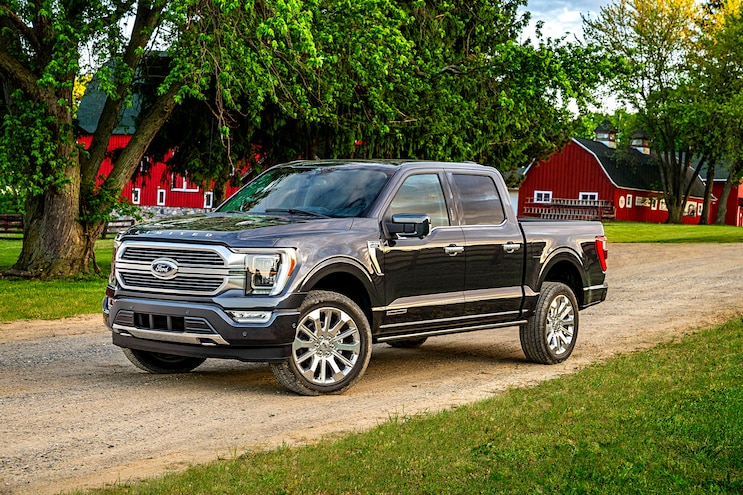 Let's just start this off by shoving the elephant out of the room early: If you're looking for detailed specs about the new 2021 Ford F-150 pickup you're going to have to wait a bit longer. While Ford has been very clear that they are "targeting best-in-class", officials have not yet provided horsepower or torque for any of the six powertrains, fuel economy, towing, or payload data. So, for now, let's all assume these figures will be as impressive as they ought to be and we'll move on to the good stuff.

The first thing you'll notice about the new 2021 Ford F-150 is its improved exterior design. No, your eyes aren't playing tricks, Ford says that every one of the truck's exterior panels has been reworked in some fashion. A new power-dome hood adorns the front, while new wraparound bumpers protect the front and rear of the truck. The front fenders have been raised, the midsection tucked in, and the tire and wheel package has been pushed out of an inch at each corner. Ford has also fitted the 2021 F-150 with larger diameter tires across the lineup. 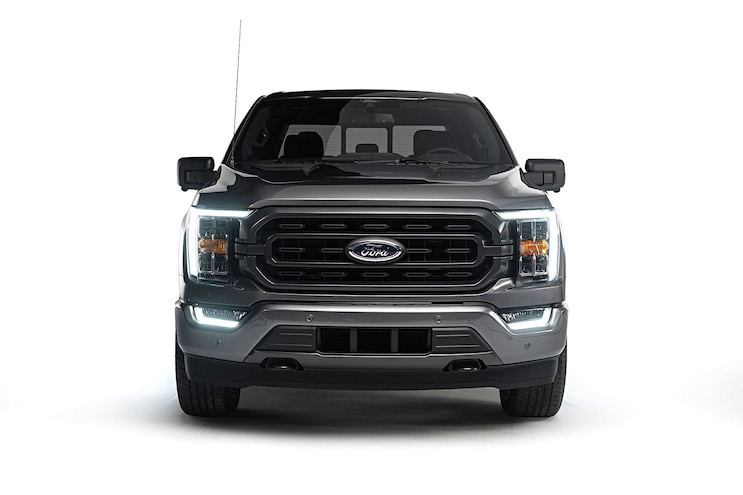 There are now 11 grille options across the range of trims, all of which are new. The rear end gets new tailgate appliques as well. Headlamps and taillamps have a new design, with LED lighting available on both. LED fog lamps are also available. Full-length power running boards can be had as in previous generations, but they now come with a convenient kick switch for easier access to the truck's bed.

The 2021 F-150 is the most aerodynamic ever, thanks to improved active grille shutters, a new automatically deploying active air dam, and new cab and tailgate geometry. All of these work together to improve fuel consumption across the lineup. And don't worry, the 2021 Ford F-150's cab is still constructed from light-weight, high-strength, military-grade aluminum.

The 2021 Ford F-150's interior has been completely redesigned to not only elevate occupant comfort, but also to add much appreciated new technology. XL and XLT models now receive a standard 8-inch touch screen, while high-series XLT and above get an all-new 12-inch infotainment screen. This new screen is oriented horizontally and runs the latest version of Ford's Sync software, Sync 4. The new system has the ability to multitask on a split-screen view and offers wireless Apple CarPlay and Android Auto. Both the 8-inch and 12-inch screens offer access to a new digital owner's manual, which is both searchable and features helpful video tutorials as well. 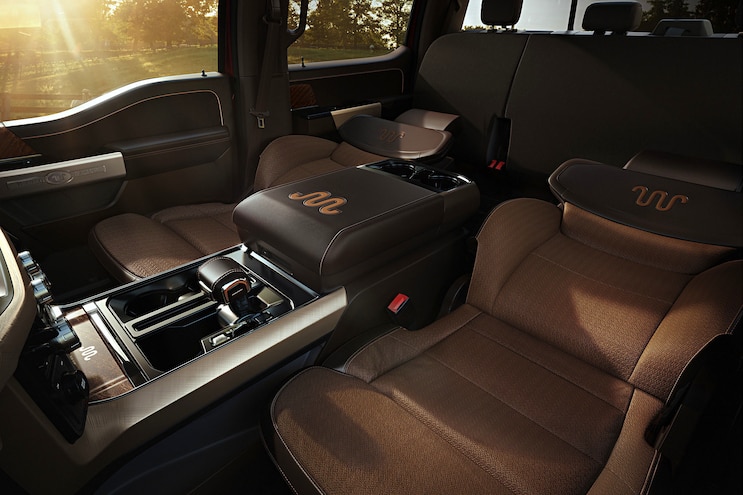 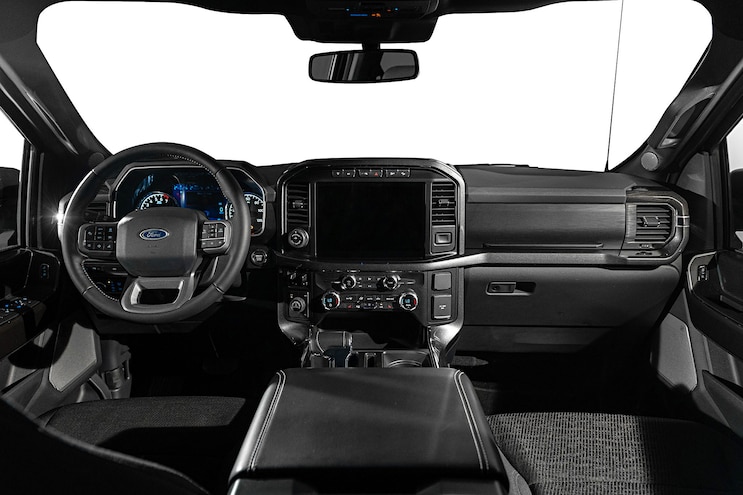 Seats have been updated as well, starting with new, more soil-resistant, two-tone seats on XL models. New, class exclusive, Max Recline Seats are now available on King Ranch, Platinum, and Limited models. These new Max Recline Seats fold flat to nearly 180-degrees, with the seat base raising up to meet the backrest and upper back support rotating up to 10 degrees. What this gives is a perfect sleeping surface for those times when a little extra rest is needed. Sorry folks, this function is only available while the truck is in park.

It's no surprise that most trucks are used for work, be it on the construction site or for home projects. Aware of this, Ford has added a plethora of useful storage and work solution features to the 2021 F-150. On the most basic end, Ford has added a standard new dual glove box. Gone are the days of the awkward little dash shelf. More advanced is Ford's new folding consoles transmission shift lever, which, when in park, is able to be rotated out of sight making way for a flat work surface that will accommodate up to a 15-inch laptop. Bench seat fans don't fret, the work surface is available for you as well. 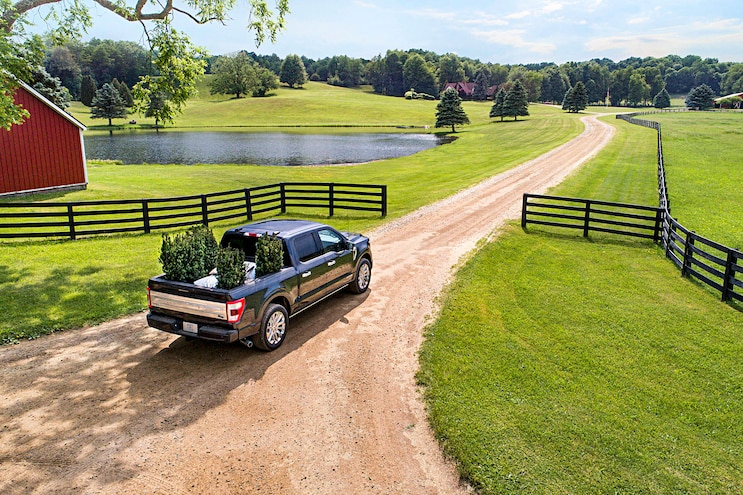 New fold flat storage bins reside underneath the rear passenger seats. When in use, the rear seat bottoms can be locked in the lowered position, creating a secure storage vault perfect for hunting and fishing gear, tools, and more. Every new 2021 F-150 comes standard with tiedown cleats mounted to the side of the tailgate, perfect for securing extra-long loads (seriously, why had no one thought of this before?). Tailgates also include pockets for using C-clamps while utilizing the tailgate as a work surface, and embossed rulers for quick and easy measurements. There are also cup holders and cell phone/device holders built in as well.

We've loved Ford's exterior, mirror mounted, auxiliary lighting from the past, and on the 2021 F-150 they've taken it a step further with a new Zone Lighting system. Controlled via the Sync 4 screen or the FordPass app, owners can turn on or off individual sections of exterior lights, not just limited to the mirror-mounted aux lights. Bed lighting has also been improved to give better illumination of not only the box, but the tailgate work surface as well. Ford's popular Pro Trailer Backup Assist has also been improved for 2021. Trailer Reverse Guidance, taken from the 2020 F-Series Super Duty, has been added and works with the truck's camera system to provide multiple high-resolution views of the trailer and its surroundings while also overlaying helpful graphics that show the driver which way to turn the steering wheel. Don't worry, the full ability to steer with the Pro Trailer Backup Assist knob is still available on the 2021 F-150.

Power For Work And Play

Among the more interesting features coming to the 2021 Ford F-150 is the onboard Pro Power generator. Optional on 2.7L and 3.5L EcoBoost V-6 equipped trucks is a 2.0kw unit, while a 2.4kw generator is standard on PowerBoost hybrid models. The big gun, a 7.2kw generator, is optional on PowerBoost hybrid trucks. The 2.0 and 2.4kw equipped trucks get two 120-volt, 20-amp, outlets in the bed while the 7.2kw optioned trucks receive those plus a 240-volt outlet.

What does this mean, exactly? Well, with the 2.0kw generator you can run an electric heater, television, portable speaker, mini-fridge, and a blender at the same time, which sounds like quite the party. The 2.4kw generator can run an electric jack hammer and a compact concrete mixer, at the same time, for 85 hours on a single tank of fuel. That's a lot of concrete work! And the monster 7.2kw generator is capable of running a 120-volt plasma cutter, 120-volt TIG welder, chop saw, 1.5hp air compressor, angle grinder, and work light at the same time, for 32 hours. Gone are the days of overloading the single 120-volt outlet by trying to charge a laptop. 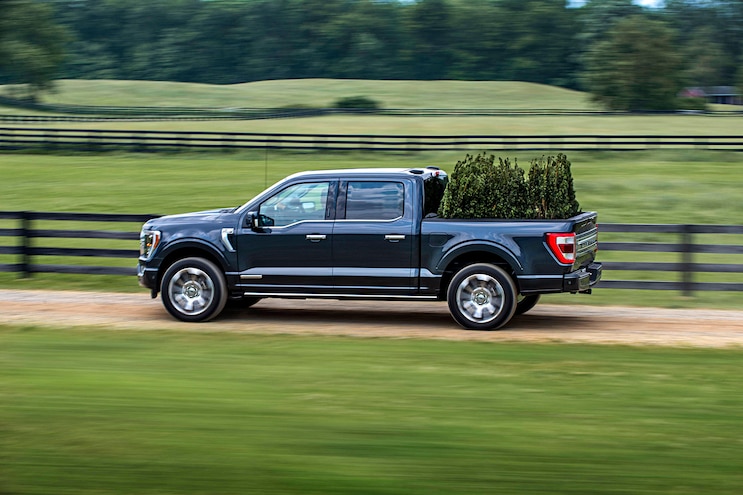 Wait, You Said There's A Hybrid?

Ford has said that the new 2021 Ford F-150 will come equipped with six engine offerings, all of which will be mated to a 10-speed automatic transmission. As we previously mentioned, Ford has yet to announce power or torque figures for any of the engine lineup. All previous engines are returning, including the naturally aspirated 3.3L V-6, the 2.7L EcoBoost V-6, the 3.5L EcoBoost V-6, the 5.0L V-8, and the 3.0L PowerStroke V-6 diesel.

New to the lineup is a 3.5L PowerBoost hybrid. This new drivetrain will be based on the 3.5L EcoBoost V-6 engine and a modified 10-speed automatic transmission, which houses the hybrid electric drive components. Providing the electrical propulsion is a 35kw motor, which is equivalent to 47 hp (according to Ford). A 1.5 kilowatt-hour battery is mounted underneath the truck. For comparison, Ram's eTorque mild hybrid uses a 0.4kWh battery and a Toyota Prius uses a 1.3kWh sized battery. Ford's liquid-cooled 1.5kWh battery pack that's being used in the 2021 F-150 is currently in used on the 2020 Explorer hybrid.

Ford claims a maximum range of 700 miles for the hybrid with a 30-gallon fuel tank. So, while no official numbers have been released, we can guess a highway fuel economy rating of about 23-24 mpg won't be out of the question. Ford has also stated that it is targeting more than 12,000 pounds of towing capability from hybrid equipped trucks. While our fuel economy estimate is largely on par with the current 2.7L and 3.5L EcoBoost V-6 engines, we also expect a more substantial increase in both city and combined ratings, as this is the area that hybrid vehicles typically shine best. 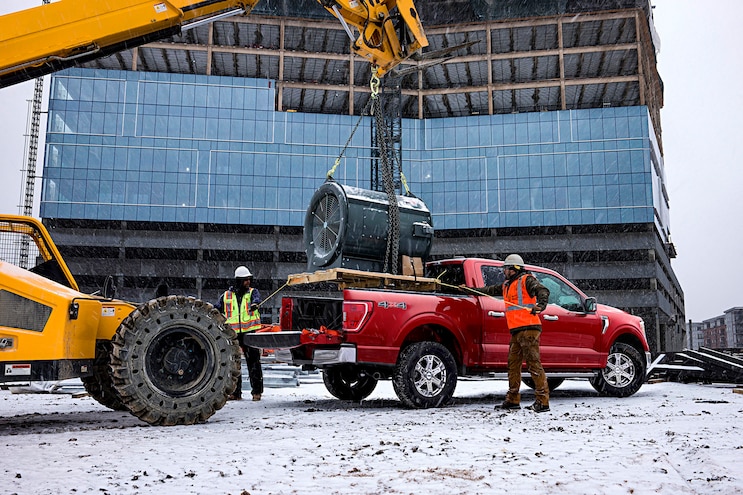 There is a certain subset of pickup owners that want their trucks to be as analog as possible. And, let's face it, they aren't Ford's intended customer for its new 2021 F-150. For the rest of us, however, Ford has loaded the new F-150 with tons of great technology. Largely invisible to the consumer, the 2021 F-150 is able to receive over-the-air software updates. What this means in reality is fewer dealer visits and less downtime. We've already mentioned the perimeter zone lighting, Sync 4, the digital and immersive owner's manual, and the new onboard generator. Also coming to the 2021 F-150 is Ford's Co-Pilot360 2.0, with more features standard from XL than ever before. The suite includes pre-collision assist, automatic emergency braking, pedestrian detection, and much more.

Ford also intends to offer Active Drive Assist on the 2021 F-150, which will allow for hands-free driving on more than 100,000 miles of roads in the US and Canada. An advanced driver-facing camera detects head position and eye gaze, which is what allows for hands-free driving so long as the driver is paying attention to the road ahead. The Active Drive Assist prep package will be available at launch, however the software required to use the system won't be available until late 2021. And, much in the style of Tesla, customers will need to pay for the hardware upfront, and for the software later to utilize it.

There's always a lot to digest whenever an automaker unveils a new or updated model. And that rings even more true in the truck space, especially when that automaker has had the best-selling pickup for more than 40 years. For the 2021 F-150 Ford has definitely brought its A-game. The interiors are gorgeous and well appointed, the exterior provides a style that you will want in the driveway, not hidden in the garage, and there's enough technology to keep the truck relevant for many years to come. We don't have deep specs yet but knowing Ford they won't disappoint. Overall, we quite pleased with what Ford has brought to the table, and beyond excited learn more as we inch closer and closer to production.