We Wood If We Could! Check Out This Astonishing Wooden Ford Raptor!

A woodworker carves a hyper-detailed 2020 Ford F-150 Raptor out of dead trees and we're amazed. 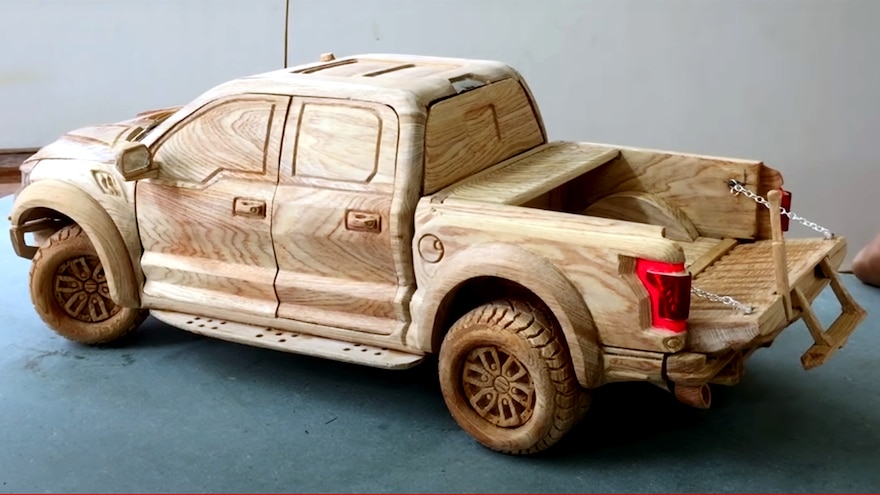 Talent. Passion. Practice. When they combine perfectly, you can get a masterpiece—which is what we're tempted to call this super-rad 2020 Ford Raptor F-150 carved out of wood by the hands of a skilled woodworker. While more than a few of us can't even draw a recognizable truck for stick figures, this guy whittled one out of wood with a level of craftsmanship that literally dropped our jaws. It's mind-blowing, and truly phenomenal. He doesn't even hide his secrets, showing us exactly how he did it. And in his eyes, it's probably that easy: Get a picture of a Raptor, get wood, and get busy. 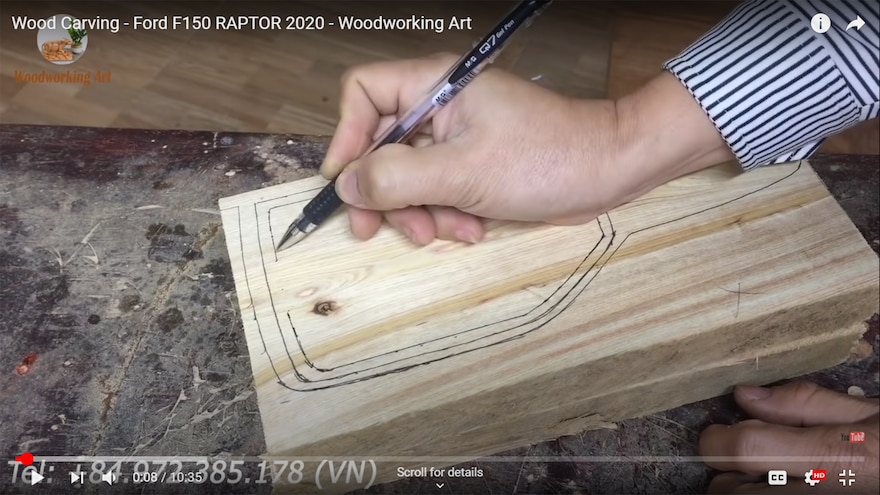 View Photo Gallery | 39 Photos
Photo 2/39   |   Wood Carving Woodworking Art 2020 Ford F150 Raptor 03
We don't know much about the carpenter who made this Ford Raptor. He lives in Hanoi, Vietnam, and he's been passionate about woodworking since his childhood. His carvings are based on customer requests and his own inspirations. The YouTube channel is called Woodworking Art, and it has nearly 500,000 subscribers and 80 million views, even though it was only created in May 2019. The channel touts woodworking art, tools, DIY, and skills. 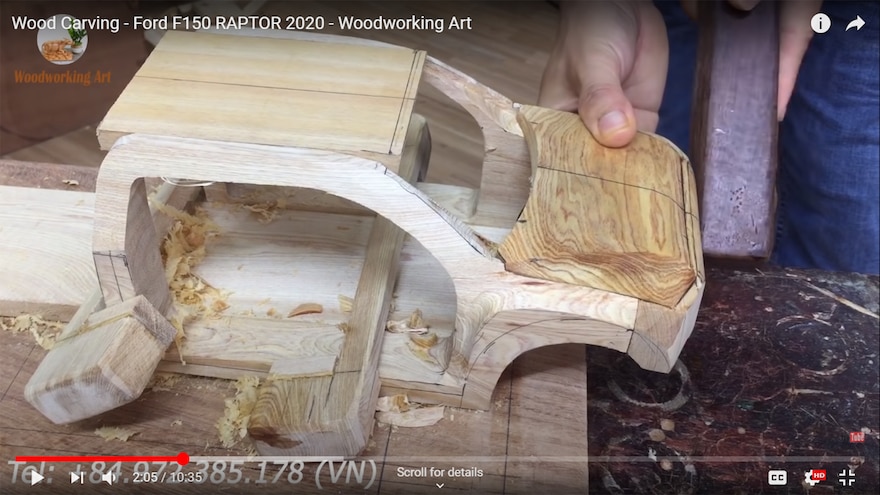 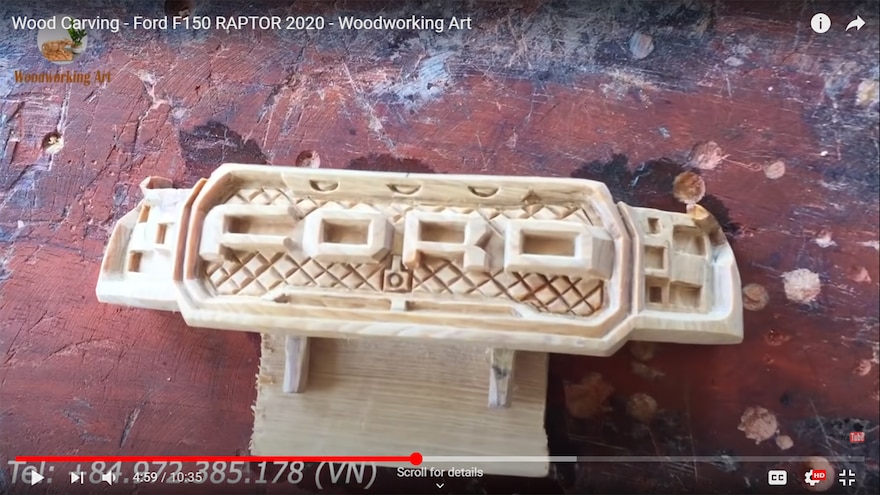 View Photo Gallery | 39 Photos
Photo 4/39   |   Wood Carving Woodworking Art 2020 Ford F150 Raptor 15
The sculpted 2020 Ford Raptor has functional doors that open and close. The tailgate also opens and closes, and hides one of our favorite secrets: Ford's innovative integrated tailgate step. That's right, it has the "man step" that slides in and out of the tailgate as well as the pole to grab on to, just like the real thing. The wheels and tires, constructed via a makeshift drill lathe, resemble the Raptor's own as close as you could expect for being wood, and they hide bearings that allow the wood Ford Raptor to roll. It has a cool subframe that hides legit control arms and little springs, enabling it to turn and have a working suspension. (Too bad it doesn't have little functional Fox shocks to replicate the real things!) The body lines are legit, and the Ford grille is the spot on. It even has a representation of the sunroof. 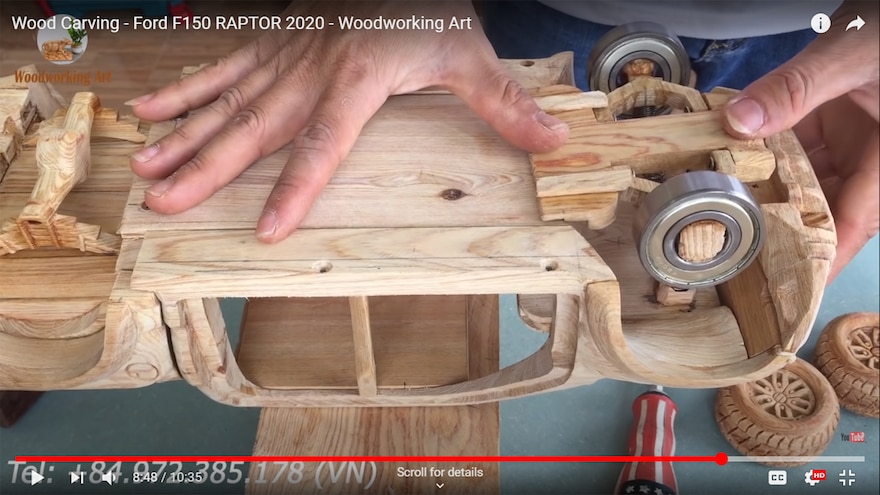 View Photo Gallery | 39 Photos
Photo 5/39   |   Wood Carving Woodworking Art 2020 Ford F150 Raptor 28
Some commenters think Ford should send this enterprising woodcrafter a Raptor, and others posit he probably spent as much time on his wood SuperCrew Raptor as Ford did designing the real thing. There are also calls for him to paint it, but we think that would take away from its sculptural aesthetic. And of course, we all wonder what it would cost to buy one. Either way, we'd love to have one of these, but with no price indicated and our distinct lack of woodworking prowess, the chances we get our own example of this awesome wood Ford Raptor are slim. 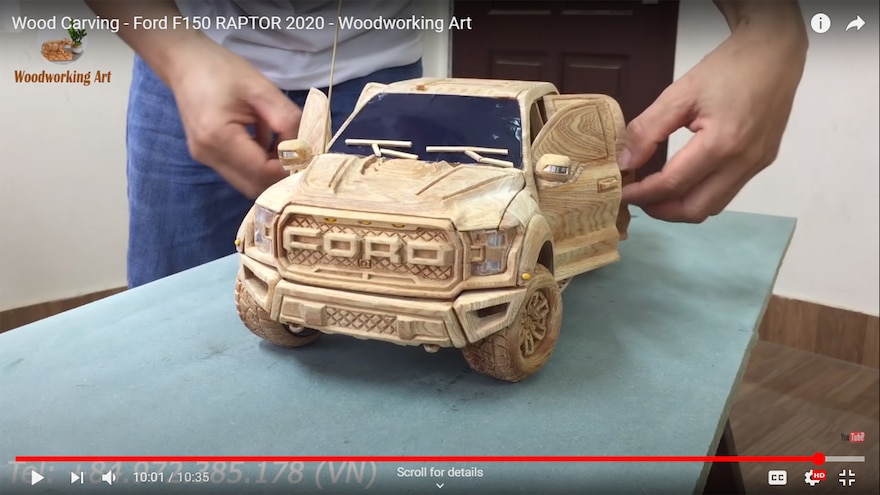 Of course, now we want to see even more, like what the Raptor would look like with a fully detailed wood interior and engine bay, and with a little wood man driving. And maybe have it hooked up to a wood Airstream trailer, and placed in a forest filled with pine trees eh, maybe we should stop while we're ahead.

Check out the video here!