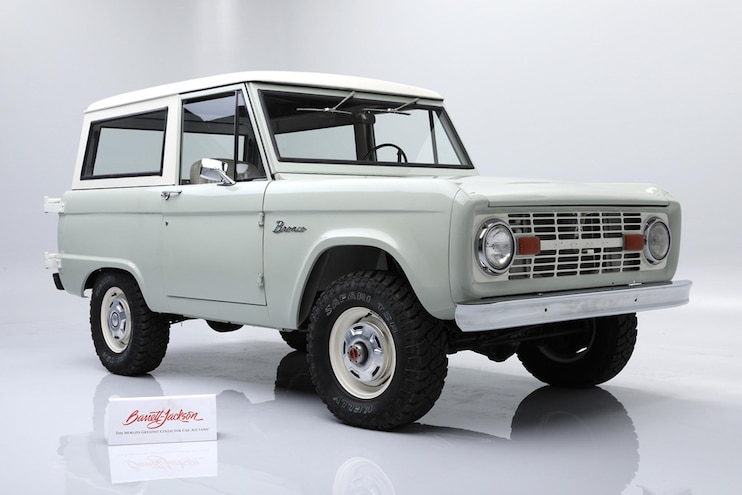 It's no secret that the classic 1966-1977 Ford Broncos are a huge hit with collectors, 4x4 enthusiasts, Ford devotees, and pretty much anybody into aftermarket automotive stuff. But nowadays finding a clean survivor with mostly original parts and uncut rear fenders is quite a rarity. Barrett-Jackson is getting ready to launch its online auction, and one of the lots that caught our eye was Lot 145 for this very clean and original-looking 1972 Ford Bronco in Sea Foam Green. The 1972 model year was smack in the middle of the early Bronco's 1966-1976 model run, and these trucks feature a nice blend of vintage attributed from the early period without all the emissions junk of the last few years of the model's run before the fullsize Bronco replaced the diminutive first-generation models in 1978. 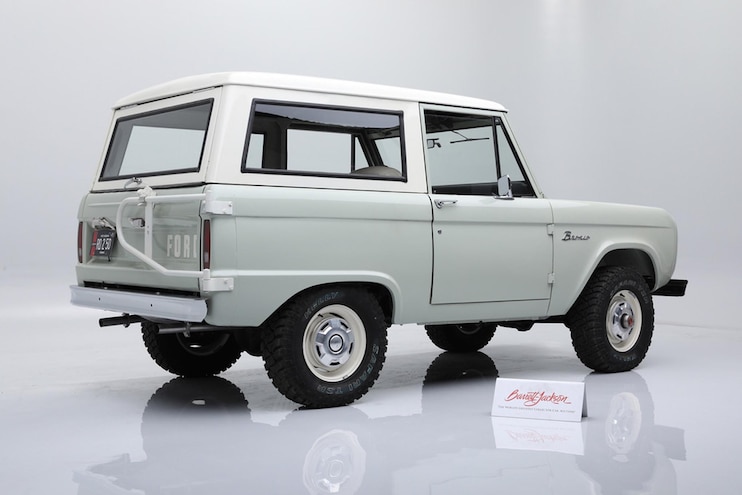 This particular 1972 Ford Bronco technically isn't a true survivor in that it's undergone a frame-up restoration, but as we said before, any Bronco that made it this far without the rear fenders getting cut for larger aftermarket wheel openings is a survivor in our book. The engine is a two-barrel 302 V-8 backed by a three-speed manual transmission that gets its gears rowed via an aftermarket Hurst shifter of unknown vintage. Originally, this vehicle would have had a column shifter, and going by the photos the original column shifter mount is still present. A manual master cylinder actuates what appears to be factory drum brakes on the front Dana 44 rear 9-inch that are most likely more than adequate to stop the factory-sized 235/75R15 tires. Aside from the Hurst shifter, replacement windshield wiper motor, and textured liner applied inside the tub, the interior appears to be mostly original. As for the undercarriage, with the factory Dana 20 is flanked by an aftermarket dual exhaust system and has what looks like a heavy undercoating or liner applied to the frame.

We're betting just off the clean body and nice Sea Foam Green respray that this 1972 Bronco fetches a pretty good price. If you're in the market or just want to follow the bidding, you can watch this auction along with all the Barrett-Jackson Online Only July 2020 Collector Car Auction here.

- OF
By Christian Hazel
90 Articles