What Else Does David Freiburger have in His Garage!? 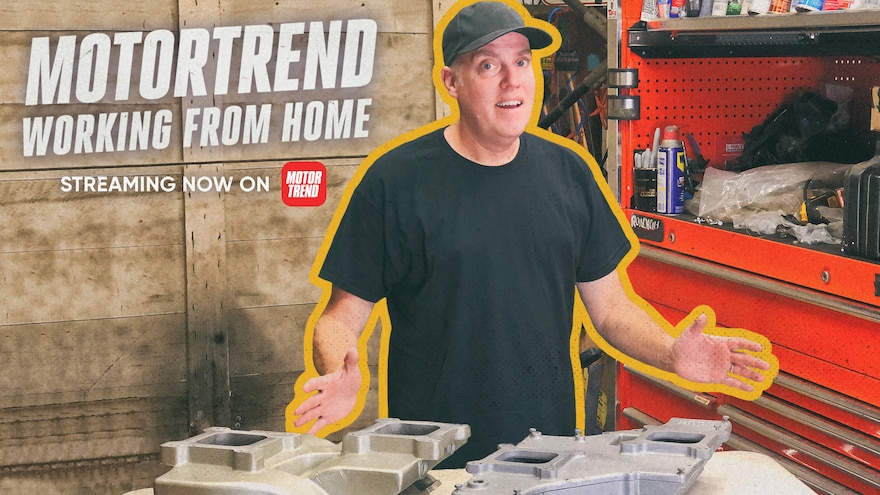 David Freiburger has been a busy (rumble) bee while working from home, and he's uncovered even more automotive treasures. The lifelong hot rodder and off-roader has amassed such an impressive collection automobilia, parts, tools, and cars that it was all too much to show you in one installment! Dive in for another journey with Freiburger through the mini-Mecca that is his garage!
Related: $1 Per Month MotorTrend App Subscription! Get Your Dad the Biggest NO BRAINER in the History of Father's Day

Most of us car nuts have collected many a sticker and decal in our travels, and Freiburger is no different. They come with speed parts, they get handed out at events, sometimes we even pay for them because they're just too cool to pass up, but the collection on the side of Freiburger's toolbox is more than just a random hodgepodge of adhesive backed paper. The Los Angeles County Raceway (LACR) sticker is special to him because (before closing) it was the L.A. hot rodder's local track and was the epicenter of all the L.A.-based car magazine testing. The Crusher Camaro and Cheap Thrills Dart both made their first passes there, along with many other project cars you've seen in HOT ROD, Car Craft, and more.
The Direct Connected decal is a throw-back in Chrysler history. Before Chrysler's performance and speed parts division was known as Mopar Performance, it was called Direct Connection and was the Mopar lover's number one source for speed parts and tuning tips. As a Mopar guy through and through, David Freiburger can't help but be intrigued by the history of the brand. The toolbox stickers have more stories to tell and, with enough time, one could learn the entire history of hot rodding and drag racing just from asking Freiburger about his sticker collection. 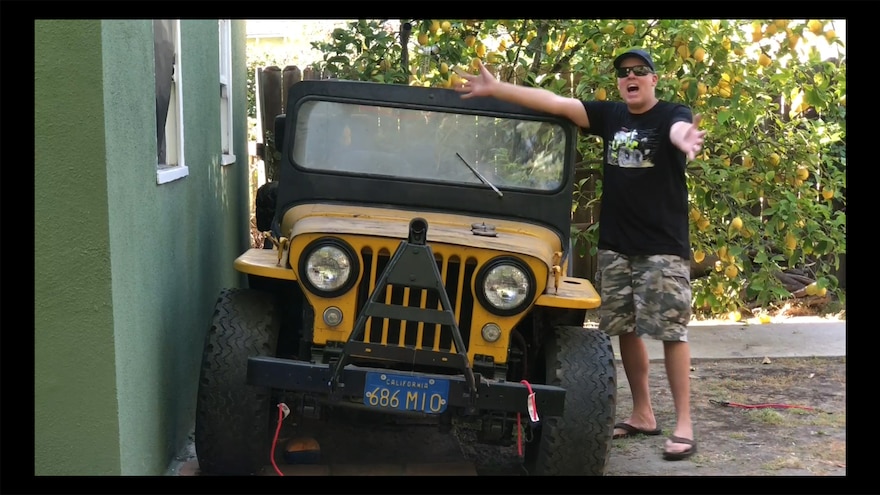 View Photo Gallery | 36 Photos
Photo 10/36   |   009 Freiburger Working From Home 1951 Jeep M38 Unveil
If you follow Freiburger's Instagram closely, this new vehicle isn't a surprise for you. If you we're hoping for another classic muscle car, sorry to disappoint. But before joining the HOT ROD staff back in 1991, he was an editor at Petersen's 4-Wheel & Off-Road. Freiburger loves trucks and Jeeps just as much as muscle cars, and this 1951 Jeep M38 is a cool and nostalgic combination of both.
The M38, the military equivalent of the civilian Jeep CJ-3A, was built alongside the M38A1 "funny fender" Jeep for one year, stopping production in 1952. Freiburger, and many other Jeep enthusiasts, believe the M38 to be the last of the good military Jeeps. This one is made even more cool because it's been hot rodded and set up for Baja racing, a previous owner even claims it ran in the Baja 1000. Freiburger debunked that pretty quickly, and just about every Southwest desert bomber claims their rig raced the 1000 at some point.
To the uninitiated, this M38 doesn't look like much, but there are some big clues to its racing pedigree. The windshield is the shorter frame from the CJ-3B, dropping the "roof" line 3 inches and the roll cage has been shortened to match. The seats are two light-weight fiberglass buckets with racing harnesses, the driver seat being mounted directly to the floor and pushed back as far as possible. Even the steering column has been lowered with the wheel pulled back closer to the driver. The original metal hood has been replaced with a fiberglass lift-off hood, and the firewall and battery tray cover have been replaced with aluminum stampings. All these things tell Freiburger that whoever built this Jeep was trying to reduce weight and lower the center of gravity as much as possible.
Under that fiberglass hood, Freiburger shows us the lost Ark of the Covenant—Jeep Style—the 134ci inline-four Willys Go Devil engine. In stock form it may have only made 60 hp, but period-correct speed parts abound under the hood, too. Right away we see the two-pot intake manifold with dual carburetors, not normal for an engine tracing its roots back to the early 1920s. The exhaust manifold is a tubular design, but the coolest part is the Chuchua cast-aluminum cylinder head. Bob Chuchua was the owner of a Southern California Jeep dealership and made speed parts for off-road racing and even sponsored a Jeep Jeepster-based Funny Car. Freiburger hopes for a hotter cam and high compression, but just the speed parts and modifications make this Jeep M38 very special to him. Look for it in a future episode of Roadkill Garage, maybe even Dirt Every Day or Roadkill.

Rare Parts and the History of the NHRA

It wouldn't be a trip through Freiburger's garage without a look at some of the rare and unique parts he's got sitting around. It's well established that David has an intake manifold problem, and the two he's showing off here materialized in his garage the week of filming. What are they and why are they cool? They're small-block Chevy cross-ram intakes and they're cool because they're tunnel ram intakes that will fit under the stock hood of a street car. These vintage units from Edelbrock and Mickey Thompson might have some design flaws, but it's Freiburger's goal to bolt one to the top of a 331 small-block Chevy, tune it into a solid runner and drop it into his 1956 Chevy 210.
As we dig further into the garage, he brings out some legit Moon discs. These were spun aluminum hubcaps developed by Dean Moon, founder of Mooneyes, for land speed racing that helped increase aerodynamic efficiency. Freiburger tried out a set on his Camaro land-speed racer in the wind tunnel, but they made a marginal difference. Fun fact, the Mooneyes logo is a play on the two O's in Dean Moon's name. Mooneyes is also famous for their foot-shaped gas pedals and the gorgeous spun aluminum gas tanks used by drag racers in the 1950s and 1960s. Let's also not forget the bi-continental Mooneyes car show that occurs in Southern California and Japan every year (almost) around Christmas. 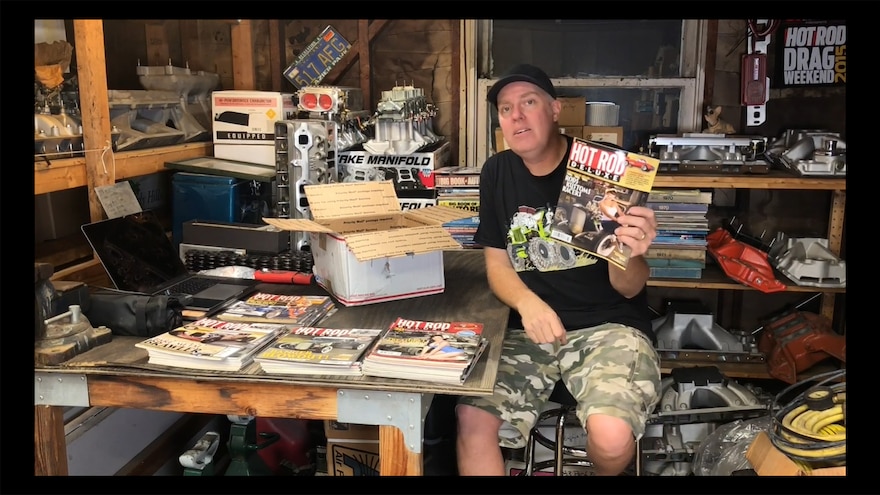 View Photo Gallery | 36 Photos
Photo 18/36   |   017 Freiburger Working From Home Old HOT ROD Deluxe Copies
David is eager to show you his recently expanded collection of HOT ROD Deluxe, as well. Freiburger re-founded the brand in 2008 and it's one of his crowning achievements as a magazine editor, turning what was a hipster rat rod rag into a modern expression of old-school hot rodding magazines. But that's only a segue, his real reason for digging out the HOT ROD Deluxe issues is to show off the work of famed photographer, Eric Rickman. Rickman was literally everywhere: the first Baja 1000, the first Bonneville Nationals, the first Oakland Roadster show (aka Grand National Roadster Show), He joined the HOT ROD staff in 1950 and was ubiquitous at almost every car event and show in the county until he retired in 1992. Freiburger considers himself very lucky to have gotten a chance to work with Rickman at the start of his time at HOT ROD in 1991.
Eric Rickman was also one of the original, four-man crew that HOT ROD and NHRA founder, Wally Parks, sent out on the Drag Safari. Wally created the NHRA at the HOT ROD offices in 1951 and in 1954 sent Rickman, Buds Coons and Evans, and Chic Cannon on a cross country road trip to every hot rod club's hometown that was eager to start racing, legally that is. The Drag Safari team taught local clubs how to manage registration, set up timing, and operate drag races. The team, in their Plymouth station wagon pulling a trailer, spread the gospel to anyone who would listen and are largely responsible for the existence of this quintessential American motorsport.
There's so much more treasure to explore in David Freiburger's garage. The man has amassed a collection unlike any other and we could spend weeks digging through it, learning the history of American car culture and uncovering lost and forget gems. Stay tuned to the MotorTrend App to find out what else Freiburger uncovers and what he's going to do with all the great junk he finds.

- OF
By Jordon Scott
3 Articles