Come Quietly Or There Will Be… Trouble. 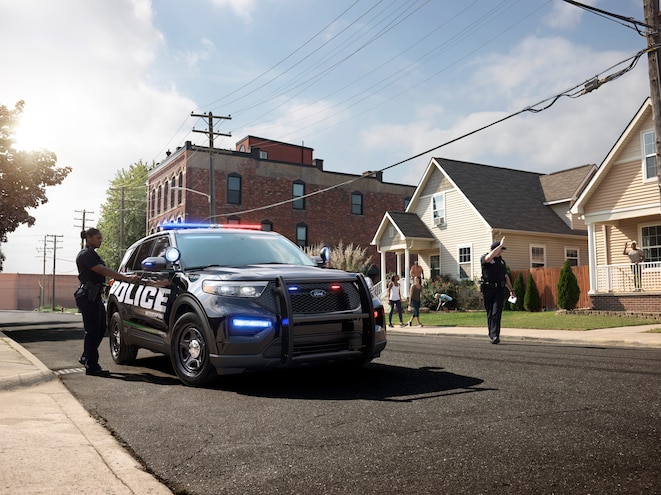 If you’ve ever driven a vehicle on public roads you’ve undoubtedly seen or been seen by the local constable and his black-and-white cruiser. If you could see through the panic sweats you may have also noticed that the majority of these vehicles wear a Blue Oval. With more than 65 percent of police vehicle sales going to Ford in 2017, it’s no surprise that the company is doubling down with an all-new 2020 Police Interceptor Utility.
Based on the Explorer platform, which is also being updated for the 2020 model year, the new Interceptor brings big changes. Leading the way is an all-new hybrid powertrain. At first glance one might brush off a hybrid for law enforcement duties, but hear us out. Ford claims that the new powertrain is not only better for the environment but will also save taxpayers money. Because of the increased idle time police cruisers see, Ford estimates that by having the ability to run vital systems and electronics without running the gasoline engine can save between $3,500 and $5,700 per vehicle in annual fuel costs. To put this in perspective, if this savings were to be applied to every Interceptor Utility sold in 2017, it would equate to more than 43 million gallons of fuel left unburned.
What about performance, you ask? In testing done by the Michigan State Police, the new hybrid Interceptor posted the fastest 0 to 100 mph time, fastest lap, fastest average lap, and highest top speed (137 mph) versus a set of competitive police vehicles including V-8–powered entries. The only faster vehicle was its brother, the 3.0L EcoBoost–powered 2020 Interceptor Utility. And Michigan wasn’t the only agency to validate its performance. In Los Angeles County Sheriff’s Department testing, the Interceptor was 1.1 seconds faster to 60 mph than the previous PI Utility’s 3.7L V-6, and 4.7 seconds faster to 100.
Like Ford’s other hybrid vehicles, there was no compromise integrating the powertrain with the new Interceptor. The lithium-ion battery is compact and does not intrude into passenger or cargo space. All three powertrains—the 3.3L Hybrid V-6, 3.0L EcoBoost V-6, and 3.3L V-6—are backed by a 10-speed automatic transmission, and all models are fitted with full-time all-wheel drive as standard.
View Photo Gallery | 3 Photos
Photo 2/3   |   TTR 1910 2020 Ford Police Interceptor Utility Hybrid 002
Safety is essential for everyone, but is doubly important when it comes to the men and women of the law enforcement community. For this reason, Ford Police Interceptor vehicles remain the only vehicles in the world that conform to the company’s stringent 75-mph rear impact crash standard. A unique steel rear subframe is fitted to the Interceptor Utility to provide increased strength and to protect vital components such as the fuel tank from strong impacts. The Police Interceptor Utility also features enhanced durability through improved cooling, specially tuned brakes, front door tethers, and police-purposed steel wheels. The Interceptor is also tested to survive an 8-inch curb impact, median crossing, 30-mph railroad crossing, and water fording up to 18 inches.
Just because it’s a police vehicle doesn’t mean the Interceptor is lacking in technology. Police Perimeter Alert utilizes the vehicle’s BLIS sensors to monitor motion in a 270-degree radius around the rear of the vehicle. When motion is detected and sensed to be moving toward the vehicle, a chime sounds to alert the officer while the system automatically turns on the rear camera, locks the doors, and rolls up the windows. Motion trails of the detected threat are also displayed on the digital instrument cluster, allowing the officer to monitor movement without raising suspicion. While the Interceptor also comes with driver assist features like Pre-Collision Assist with auto emergency braking and pedestrian detection, these features can also be overridden temporarily while performing precision immobilization maneuvers. Officers can also activate the rear camera on demand. Rounding out a robust protection package are anti-stab plates in the front seat backs and available level 3 or 4 armor that can be installed in the front doors.
View Photo Gallery | 3 Photos
Photo 3/3   |   TTR 1910 2020 Ford Police Interceptor Utility Hybrid 001
Ford has a long history of offering police-specific packages dating back to 1950 when the Interceptor nameplate debuted on the optional 110hp flathead V-8 engine. Today Ford offers a full lineup that includes the new 2020 Interceptor Utility, Interceptor Utility Hybrid, the Police Responder Hybrid Sedan, F-150 Police Responder, Expedition SSV, F-150 SSV, Transit PTV, and SSV Plug-In Hybrid Sedan.