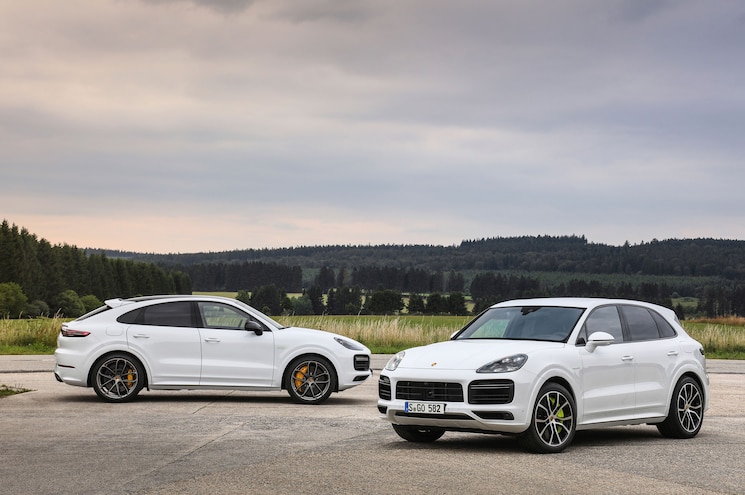 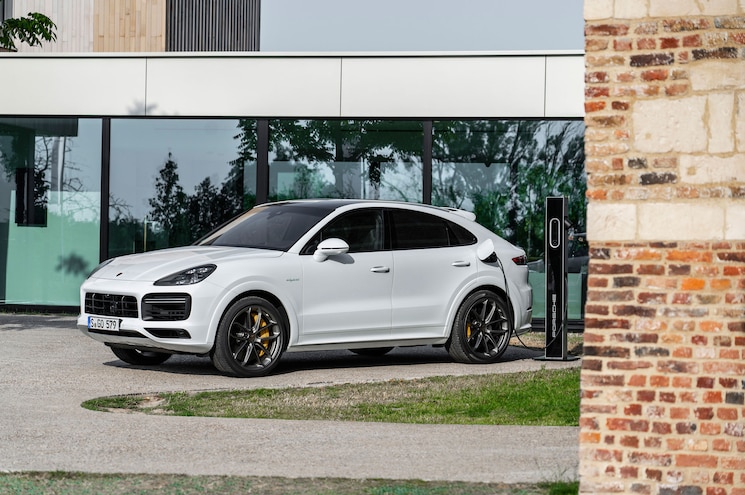 The Turbo S E-Hybrid comes by those numbers honestly, borrowing the standard Turbo's 4.0L twin-turbocharged V-8 that produces 541 hp and 568 lb-ft on its own, supplemented by a 134hp, 295-lb-ft electric motor. Pairing that motor to the twin-turbo V-8 found in the Cayenne Turbo will likely improve its bombastic throttle response even further by smoothing out turbo lag with a nice groundswell of electric torque. 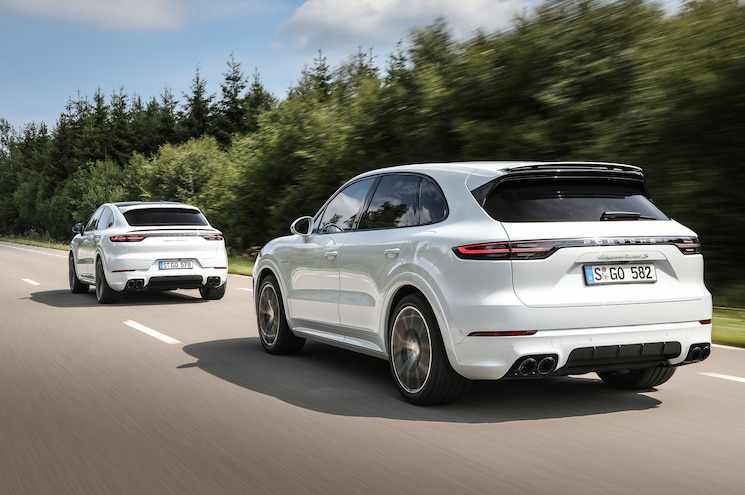 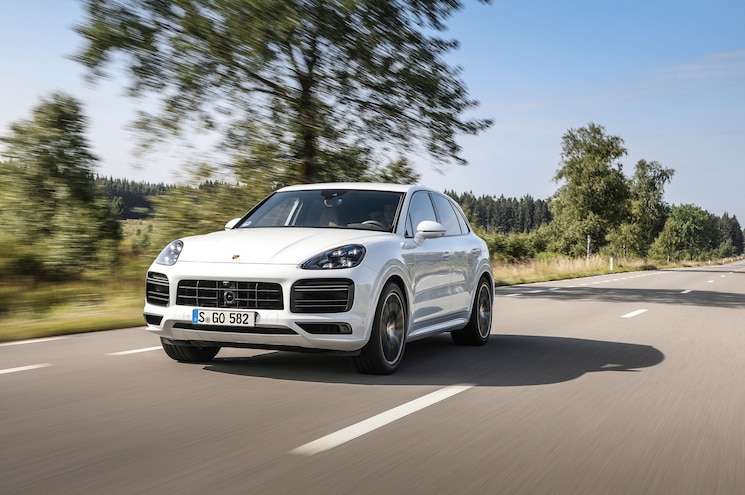 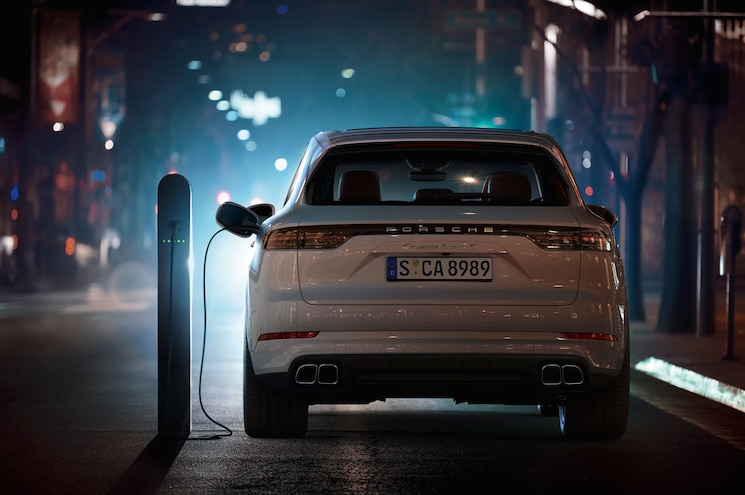 Sandwiched between the gas engine and the eight-speed automatic transmission, the electric motor can work either alone or in tandem with the turbo V-8, sending power to the wheels via Porsche Traction Management all-wheel drive. When propelling the Cayenne all by itself, Porsche says the electric motor will be capable of hitting a traffic-friendly 37 mph in about 6.6 seconds. That's not exactly hair-on-fire fast, but it's definitely tractable for those days when you're content to just trundle about in silent, zero-emissions comfort. 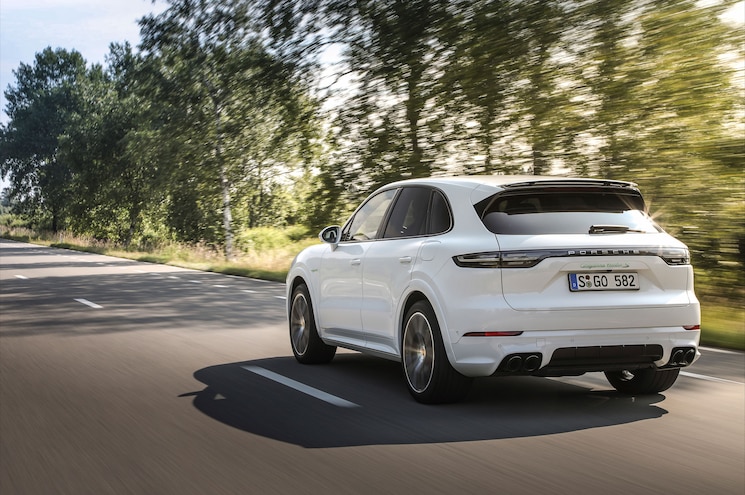 View Photo Gallery | 10 Photos
Photo 6/10   |   2020 Porsche Cayenne Turbo S E Hybrid Exterior Rear Quarter 02
Thanks to a 14.1-kWh battery, the Cayenne Turbo S E-Hybrid is capable of some zero-emissions motoring, but exactly how much remains to be seen. Porsche estimates a total electric-only range of about 25 miles, but that has yet to be verified by the EPA. The company also claims electric-only fuel efficiency of about 60 MPGe.
For comparison, the previous-generation Cayenne S E-Hybrid, which went out of production after the 2018 model year, was capable of 14 miles of electric-only driving courtesy of a 10.8-kWh battery, and it achieved an EPA-certified 46 MPGe. To be honest, we think Porsche's estimates might be a tad optimistic—the Turbo S E-Hybrid should probably get about 50 MPGe, with a combined gasoline/electric efficiency rating of 23 mpg. Still, getting more than 20 mpg in something with 541 hp is a high achievement. 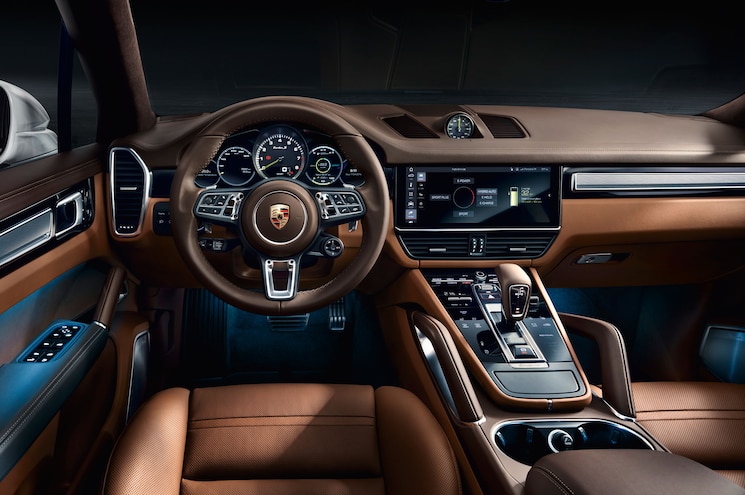 Standard on both the Cayenne and Cayenne Coupe Turbo S E-Hybrid are Porsche's highly adjustable 18-way adaptive sport seats, which offer customizable side, hip, thigh, and lumbar support in addition to the expected fore/aft, height, and recline functions. The Cayenne comes with a conventional rear bench, while the Cayenne Coupe gets two individual bucket seats in the back—the bench is available as a zero-cost option.
The Cayenne and Cayenne Coupe both come standard with very stylish 21-inch wheels, but as might be expected of a Porsche, larger rollers are available as options. Furthermore, the Cayenne Coupe can be had with a Lightweight Sport package that jettisons the standard fixed-glass roof for one rendered in carbon fiber. The pack also includes 22-inch wheels, Sport Design bumper and side skirt extensions, carbon fiber interior trim, an Alcantara multifunction steering wheel, Alcantara headlining material, and exceedingly cool black and silver houndstooth seat inserts. 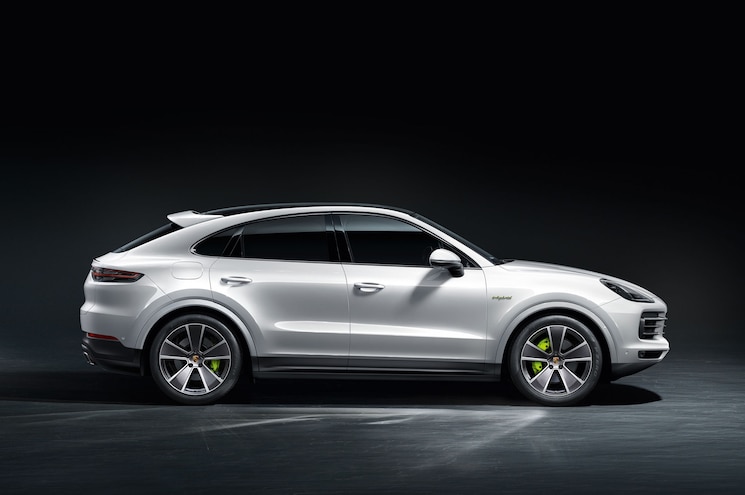 Adding Flair to the Base E-Hybrid 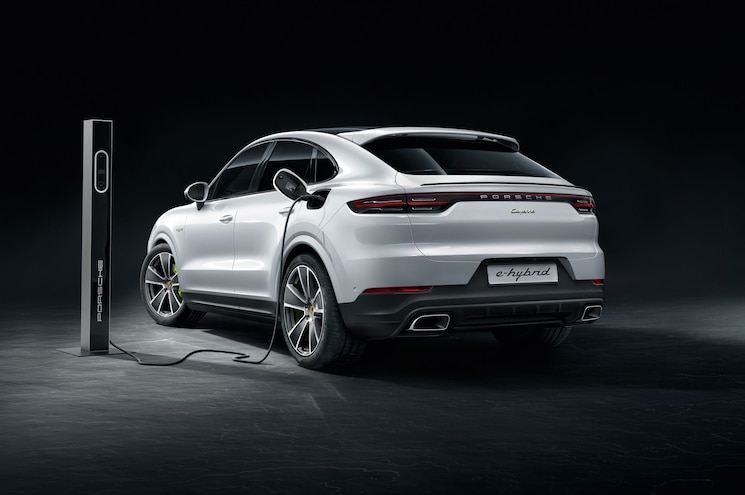 In addition to the two Turbo S E-Hybrid variants, Porsche also introduced the coupe version of the base Cayenne E-Hybrid. It features the same 3.0L turbocharged V-6 as the standard Cayenne Coupe and Cayenne E-Hybrid SUV, bolstered with the latter's r sum of electrification features. Total system output for the Cayenne Coupe E-Hybrid is the same as its SUV sibling: 455 hp and 516 lb-ft. That will allow it to hit 60 mph in less than 5 seconds, with a top speed of 157 mph. Like other Cayenne Coupe models, the hybridized version will come standard with a panoramic fixed-glass roof, as well as larger standard wheels relative to its Cayenne SUV equivalent. The Cayenne Coupe E-Hybrid will start at $86,400 when it arrives early next year, an increase of $5,300 relative to the Cayenne SUV E-Hybrid.

While the Porsche Cayenne has always been a comparatively hedonistic purchase among other luxury SUVs, the new E-Hybrid models simultaneously justify and complicate the budgetary discussion. For one, both the base E-Hybrid and the Turbo S E-Hybrid offer zesty performance, and the Cayenne Coupe versions of both add a healthy dose of style to the mix.
But then again, 86 grand for the base plug-in is a huge number, to say nothing of the Turbo S's nearly doubled pricetag. Nevertheless, for those with deep enough pockets, the posh and performative Cayenne Coupe E-Hybrid, Cayenne Turbo S E-Hybrid, and Cayenne Coupe Turbo S E-Hybrid should prove to be an easy way to go green without sacrificing style or driving fun. 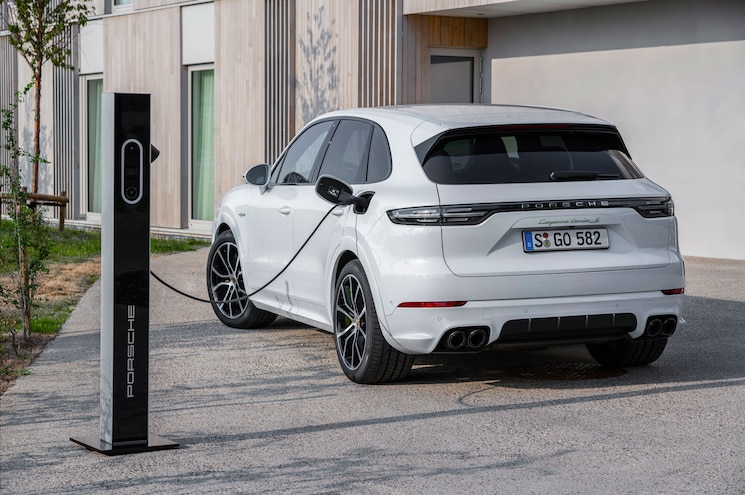