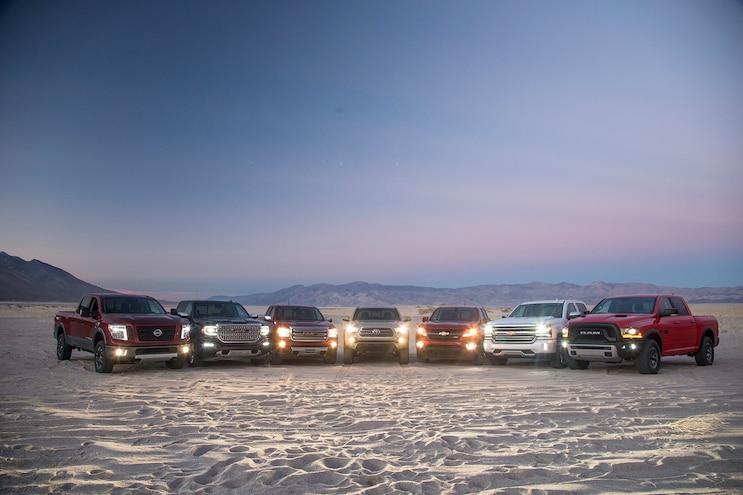 Truck Trend’s 2016 Pickup Truck of the Year test is just one day away from conclusion, and the somewhat leisurely day three the judges enjoyed yesterday is in the rearview mirror as we headed out to California’s Lake Isabella region for informal fuel economy observations, as well as more photography.
Some surprises were noted today on the trucks’ fuel economy. The truck with the largest-displacement engine in the test, the GMC Sierra 1500 Denali, equipped with a burly 6.2L 420-hp V-8 engine, also returned one of the best fuel economy averages, aside from the smaller trucks. On this leg of the journey, the leather-lined luxo-hauler returned an impressive indicated 20 mpg average. This actually slightly beat out its smaller-engined sibling, the Chevrolet Silverado High Country with the 5.3L V-8, which returned a still-excellent 19.8 mpg. The gas-powered Toyota Tacoma TRD showed an indicated 18.2 mpg average, while the Cummins-powered Nissan Titan XD returned 17.7 mpg. However, the mileage champ of the day was by far the GMC Canyon diesel, which returned an outstanding 29 mpg.
Every truck on this test was also equipped with a navigation system and touchscreen infotainment interface, giving judges a chance to compare and contrast. The Apple CarPlay and Android Auto system was on all the GM models in our test, and does a reasonably good job of mirroring many of the phone’s commonly-used functions on the dashboard. One gripe noted is the inability to scroll through CarPlay menus or contact lists using the knob controller. The Ram Rebel 1500’s Uconnect system is still excellent, and reinforces how far ahead of the game FCA was several years ago, as it’s still compares favorably with newer systems from competitors.
Stay tuned for the final day of PTOTY 2016, which consists primarily of off-road driving, where the trucks will be subjected to off-road trails to see how they deal with inhospitable terrain. Be sure to check out our day one, day two and day three coverage of PTOTY 2016!