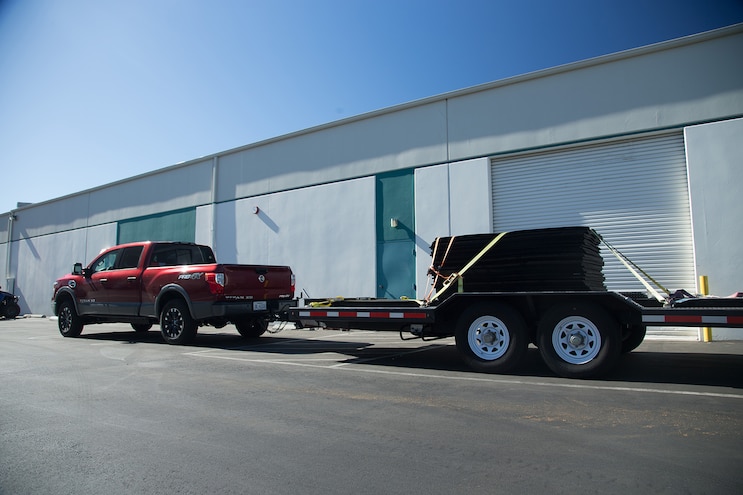 With the instrumented testing out of the way on day one, day two of our 2016 Pickup Truck of the Year competition focused on real-world towing performance. This year, an “urban” tow loop route was chosen, adding an additional challenge to drivers of navigating stop-and-go traffic and freeway merging. Each truck was laden with a trailer weight 75 percent of its maximum rating.
Judges were asked to evaluate each truck’s subjective feel under load, including engine performance, acceleration, ride and steering control under load, and general feel while towing. To nobody’s great surprise, the diesel models tended to seem happier and more within their element in this exercise. In contrast, many of the gas-powered models seemed to strain under the load of the trailers, and had a more hectic, higher-revving character.
Testing started with the model with the highest rated towing capacity (the Nissan Titan XD) and on down to the model with the lowest towing capacity (the Toyota Tacoma), with the weight modulated and customized for each truck’s towing capacity by adding or removing 100-pound rubber mats. An unexpected surprise was the realization that the brakes on our flatbed trailer were mysteriously inoperable, giving an extra opportunity to test the truck’s tow/haul mode and engine and exhaust braking capabilities. Even navigating through challenging traffic and aggressive or inept drivers, all staffers were able to handle the trucks without incident.
Be sure to check out our photo coverage of day one, and stay tuned to Truck Trend all week, and in the weeks ahead for the announcement of our PTOTY 2016 winner!