Style, Luxury, and a Whole Heap of Power 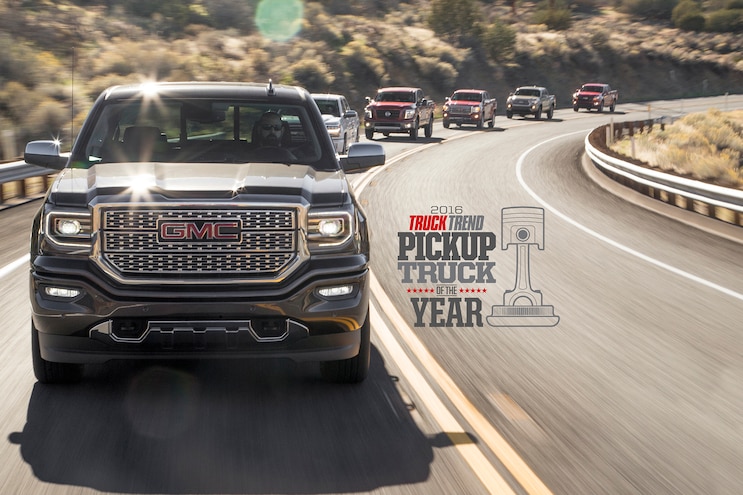 After a full week of testing, followed by another two weeks of scoring and calculations, the staff and editors of Truck Trend are excited to announce that the winner of the second annual Pickup Truck of the Year competition is the 2016 GMC Sierra 1500 Denali. With a significant exterior and interior update for the 2016 model year, the Sierra came into our test as an underdog against all-new competitors, but its winning combination of power and torque, pampering interior comfort, black-tie styling, and long list of features ended up taking top honors in the face of newer trucks like the heavy-half Nissan Titan XD and fun-ready Toyota Tacoma TRD Off-Road.
With an abundance of standard and optional features on our test truck, we found a lot to enjoy in the Denali. GMC’s Intellilink onboard infotainment system is still among the best in the business, and for 2016, the company offers Apple CarPlay as standard on the truck. CarPlay made syncing our iPhones easier than ever, allowing us to access destinations, stream music, and answer and make phone calls through our phones using Apple’s voice-recognition software, helping us keep hands on the wheel and eyes on the road.
However, the 6.2L V-8’s 420 hp and 460 lb-ft of torque were much better at preventing distracted driving than any of the truck’s onboard infotainment features. Turning the key and hearing the small-block V-8 rumble to life was a near-religious experience that caused every driver to sit up straighter and pay more attention, lest we miss one measure of that engine’s baritone exhaust note. The engine made the Sierra Denali one of the fastest vehicles Truck Trend has ever tested, with a blazing 15-second quarter-mile time at the truck’s top speed of 98 mph. Even with all that power, the Sierra got a respectable 19 mpg on its best tank.
That power would have been worthless, however, if it weren’t attached to a capable platform. But while towing, driving long highway miles, hauling payloads and passengers, and rolling over rough city streets, the Denali impressed us with its stability, capability, and driving ease. It dispatched our trailer test well, allowing drivers to accelerate and brake effortlessly to keep up with the flow of traffic, and it handled its burdens with aplomb, unlike some of its competitors that strained against their payloads or trailer weights.
Long highway inclines were no problem for the engine, which is attached to a smooth-shifting eight-speed automatic transmission. We were a little disappointed to see that GM didn’t seem to modify its shift logic much from the transmission’s introduction in 2015, as it tends to upshift early, requiring a surprising one- or two-gear kickdown when we matted the throttle, but since the engine made such great noises, we were willing to forgive the transmission a little.
The Sierra Denali even excelled off-road, where last year its Chevrolet Silverado twin disappointed with its low-hanging running boards. For 2016 the Sierra adds optional retracting side steps. Its Achilles heel is actually on its nose, in the form of a too-low air dam under the front bumper, but otherwise, clearance, traction, and torque were no problem, no matter what terrain we were fighting.
Overall, the Sierra impressed nearly every judge by being solidly competent in every test. Its smart, understated styling drew no complaints, and its comfort and capability were at or near the top of the test in every metric. When the dust settled and the votes were tallied, the Denali took top honors, proving that consistency is key.
2016 GMC Sierra 1500 Denali
Engine: 6.2L/420hp/450-lb-ft V-8
Transmission: 8-speed automatic
Axle Ratio: 3.23:1
Curb Weight: 5,753 pounds
GVWR: 7,200 lbs
Total Payload: 1,447 lbs
Tested Payload: 1,400 pounds
GCVWR: 15,000 pounds
Trailer Weight: 9,100 pounds
Tested Trailer Weight (75% Max Rating): 6,845 pounds
EPA City/Highway/Combined Fuel Economy: 15/2
GMC Sierra 1500 Denali Wins TRUCK TREND’S 2016 Pickup Truck of the Year Award
First-Class Amenities, 21st Century Technology, and Best-in-Class Power Lead GMC Sierra 1500 Denali to Best Field of Seven


LOS ANGELES December 22, 2015—TRUCK TREND, the nation’s premier light-truck authority, has selected the GMC Sierra 1500 Denali as the winner of its second annual Pickup Truck of the Year Award.

TRUCK TREND’s Pickup Truck of the Year award program is an invitation-only shootout that is only open to all-new or significantly revised pickup trucks for the upcoming model year. For 2016, the field of vehicles included seven entries from five companies and consisted of one variant from each company’s eligible product line. This year’s contenders included:

TRUCK TREND’s experts were immediately impressed with the Sierra Denali, which is focused on comfort, safety, and innovation. For 2016 the Sierra Denali received a styling update by way of an all-new front fascia featuring advanced LED lighting that includes GMC’s signature daytime running lamps, headlamps, and foglamps. Premium accents and features are found throughout. A new body-colored front bumper leads the way, while chrome-clad mirrors, door handles, and trim add a light touch of class. Unique 20-inch, ultra-bright, machined aluminum wheels round out the exterior décor and add to the upscale Denali’s presence.

First-rate features abound in the cabin, starting with perforated leather seating, soft-touch materials on the instrument and door panels, and real brushed-aluminum trim. Triple-sealed doors, hydraulic body mounts, and active noise-cancellation technology all work together to ensure that Sierra Denali has the quietest cabin in the class. Magnetic Ride Control suspension provided a smooth and comfortable ride in all road conditions.

Tucked under the skin was a 6.2L V-8 engine that churned out 420 hp and 460 lb-ft of torque, which was mated to an all-new, eight-speed automatic transmission. This combination propelled the Sierra Denali to the top of our leaderboard when it came to instrumented testing. With an unladen 0-60-mph time of just 6.60 seconds and an elapsed quarter-mile time of 15.03 seconds at an astonishing 97.83 mph, the Sierra Denali was one of the quickest production pickups our experts have ever tested. The Sierra Denali backed this up by besting our field on the track with a payload and trailer in tow as well. Even with so much power on tap, the Sierra Denali returned an impressive best tank of more than 19 mpg.

“GMC has set out to produce the definition of a luxury pickup, and its Sierra Denali has certainly hit that mark,” says TRUCK TREND Editor Jason Gonderman. “By combining a finely appointed interior with a world-class drivetrain and 21st-century technology, GMC has taken the fullsize truck to the next level. Our test is hard on both man and machine, and the fact that the Sierra Denali took on each grueling challenge with relative ease consistently impressed our panel of experts.”

The GMC Sierra 1500 Denali won TRUCK TREND’s 2016 Pickup Truck of the Year award only after completing a demanding weeklong test comprised of more than 1,100 miles of performance testing, hauling, towing, fuel economy calculation, and off-roading—all important disciplines in which truck owners expect their vehicle to be competent.

To thoroughly test each truck, the competition began with a day of instrumented testing at the Auto Club Speedway in Fontana, California. The field was subjected to 0-60-mph and quarter-mile acceleration testing as well as 60-0-mph braking while unladen. Each truck was then loaded up with its maximum payload and retested from 0-60 and for quarter-mile elapsed time. The final instrumented test involved each truck accelerating to 60 mph while towing 75 percent of its rated trailer capacity.

Using the same parameters as the instrumented testing, the trucks were again loaded up and driven on a 15-mile loop through Southern California. Throughout the day, experts, payloads, and trailers rotated through the group, allowing each judge to drive every vehicle with a payload and a trailer. This also allowed testers to experience how easy each truck was to load or hook a trailer to, effectiveness of tie-down positions and integrated trailer brake controllers, how well the trucks were designed with outward visibility in mind, and chassis performance, among other features important to truck buyers.

Finally, over the course of the 1,100-mile test the experts had ample time on the highway with each vehicle to form qualified opinions regarding important factors such as interior ergonomics, seat comfort, technology usability, build quality, and features and benefits of each truck, while also logging fuel usage to gauge real-world economy.

With testing completed, the staff at TRUCK TREND crunched the data and found that the Sierra 1500 Denali led in three out of seven scoring categories: Interior (10%), Functionality (15%) and Empirical (20%), while coming in Second Place in the Highway (15%) and Exterior (15%) portion of the test. The remaining two categories were Off-Road (15%) and Towing and Hauling (15%). In the end, it was the Sierra 1500 Denali that scored the highest number of points and earned the nod from TRUCK TREND’s jurors.

“TRUCK TREND’s Pickup Truck of the Year award is not a popularity contest,” says Sean P. Holman, content director for TEN: The Enthusiast Network’s Truck and Off-Road Group. “It is a data-driven test by truck enthusiasts who drive and evaluate trucks every day, bringing to the test expertise in different truck disciplines. TRUCK TREND prides itself as being the credible go-to authority for light-truck reviews and information for the industry.”

About TRUCK TREND
TRUCK TREND®, a media brand of TEN: The Enthusiast Network, was founded in 1998 as an offshoot of MOTOR TREND, an internationally recognized automotive brand. TRUCK TREND, the authority on light trucks, is an industry leader in the truck category and currently has a total audience of 2.1 million. The brand tests and reports on sport-utility vehicles and crossovers, with an emphasis on pickup trucks, providing vital information to new-model shoppers and avid truck enthusiasts alike. Please visit trucktrend.com.

About GMC
GMC has manufactured trucks since 1902, with innovation and engineering excellence built into all GMC vehicles. The brand is evolving to offer more fuel-efficient trucks and crossovers, including the Terrain small SUV and Acadia crossover. GMC’s highest-volume vehicle, the Sierra pickup, is the most powerful light-duty pickup on the market, and the first fullsize pickup to receive the highest-possible five-star Overall Vehicle Score for safety since the National Highway Traffic Safety Administration changed its New Car Assessment Program for the 2011 model year. Details on all GMC models are available at gmc.com.