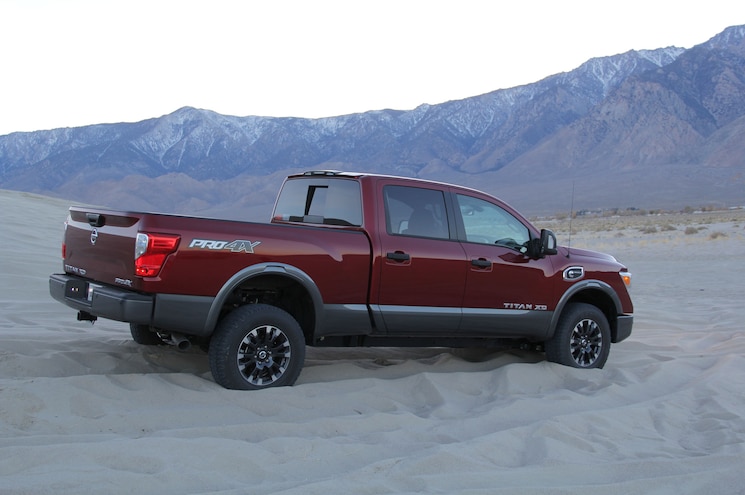 Ever since it was announced that the next-generation Nissan Titan would be offered with a Cummins turbodiesel engine, interest, and anticipation in the truck has been high. With sales languishing sometimes less than 1,000 units a month on the outgoing model, which was essentially unchanged since its introduction in 2004, many believed Nissan would be pulling the plug on its fullsize pickup effort altogether. However, the company said it remained committed to the segment, and the 2016 Nissan Titan XD is the culmination of those efforts.
Positioned as a slightly lower-cost alternative to traditional HD pickups, the Titan XD pushes the boundaries of the traditional 1/2-ton class with a 7,000-plus pound weight and a 5.0L V-8 turbodiesel producing 310 hp and 555 lb-ft of torque, the highest torque rating among non-HD trucks. Hardware such as a factory bung for a gooseneck trailer hitch, trailer light diagnostic check, AAM rear axle, Aisin heavy-duty six-speed transmission and beefy ventilated disc brakes at all four corners emphasize the XD’s workhorse mission. Unlike the outgoing Titan, with its hard, angular plastic interior, the Titan XD’s cabin is suitably plush and modern, with such amenities as heated and cooled seats in several trims, and a power tilt-and-telescope steering wheel and memory seats on the Pro4X and Platinum Reserve models.
Will the Titan XD find the buyers Nissan thinks it will in the “white space” in between traditional 1/2-tons and HDs? We won’t have to wait much longer to find out!