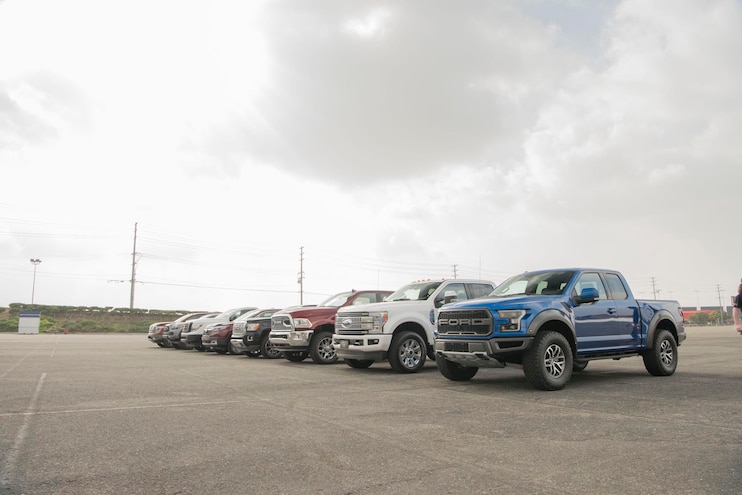 It’s that time of year again when we assemble the latest contenders for the title of our Pickup Truck of the Year. This year, we have eight contenders for the title, including three midsizers, two HDs, two 1/2-tons, and one in-betweener. In terms of powertrains, we have nearly every variation represented with the exception of a manual transmission. We even have variety in our cab and bed configurations, something that can’t be said of past tests when all trucks were crew cab short beds. Without further ado, here are the trucks of the Truck Trend’s 2017 Pickup Truck of the Year test. 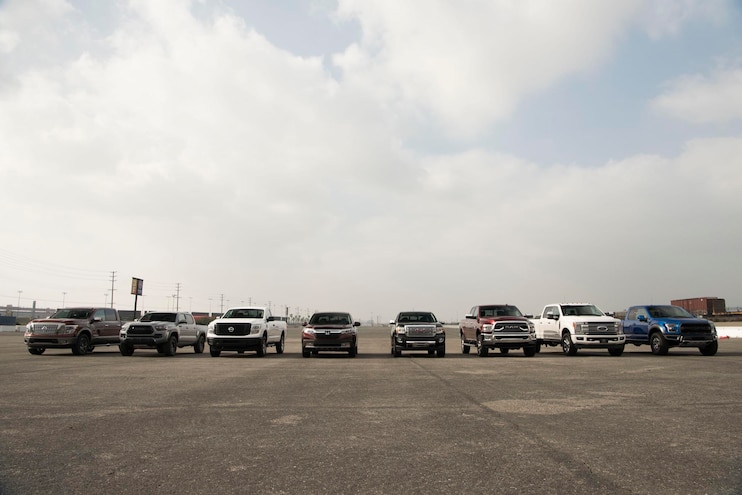 View Photo Gallery | 10 Photos
Photo 2/10   |   Truck Trend 2017 Pickup Truck Of The Year Lineup Front
2017 GMC Canyon Denali
GMC finally rounds out its Denali lineup with the addition of the Canyon for 2017. The top-of-the-line Canyon adds heated and cooled front seats, Denali badging, and 20-inch wheels. For 2017, all V-6 Canyon models get an updated 3.6L V-6 with cylinder deactivation making 308 hp and 275 lb-ft of torque, mated to an eight-speed automatic. An additional Denali-exclusive feature on the Canyon is a heated steering wheel, sure to be appreciated in colder areas but largely unused in Southern California’s famously mild climate. 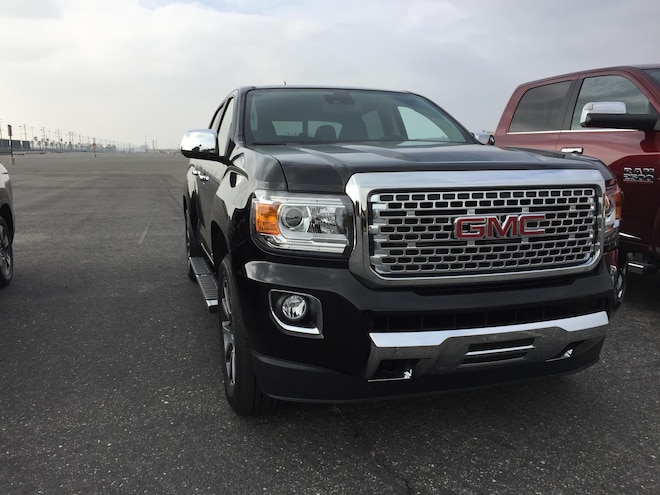 View Photo Gallery | 10 Photos
Photo 3/10   |   Truck Trend 2017 Pickup Truck Of The Year Gmc Canyon Denali
2017 Honda Ridgeline
The new Ridgeline is an outlier in this test in several respects. It is the only unibody-chassis vehicle in the test. It has the only transverse powertrain in this test, and it is the only vehicle here without low-range. However, to compensate for its crossover-based underpinnings, the Ridgeline’s system does offer multiple terrain settings. Favorite features of owners and the staff include the in-bed trunk and in-bed “exciter” speakers, facilitating the ultimate tailgate parties. Although the Ridgeline sacrifices some tough-guy capability for on-road comfort, it makes a lot of sense for buyers that spend most of their time on the road and commuting and only occasionally use or need the capability of a truck. 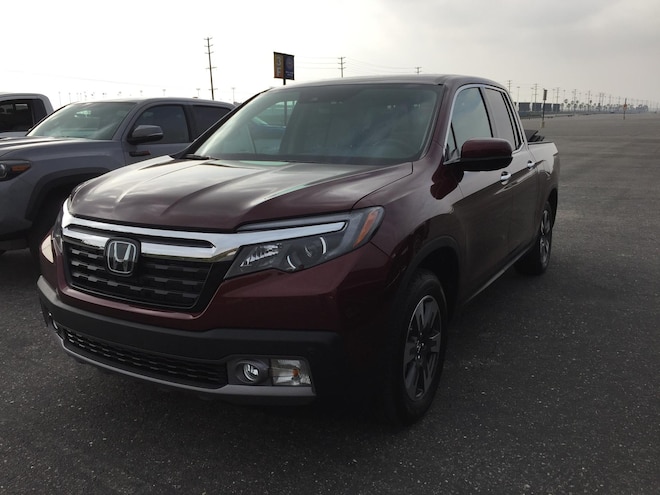 View Photo Gallery | 10 Photos
Photo 4/10   |   Truck Trend 2017 Pickup Truck Of The Year Honda Ridgeline
2017 Toyota Tacoma TRD Pro
After taking a one-year hiatus, the Tacoma TRD Pro is back for 2017, and like its predecessor, it is aimed squarely at off-road enthusiasts. One look at the hardware list makes this truck’s intentions clear, with 2.5-inch internal-bypass Fox Racing shocks, a TRD Pro aluminum front skidplate, Rigid Industries LED fog lights, and a TOYOTA block-letter grille. As with most other Tacoma models, the TRD Pro is powered by a 3.5L D-4S dual-injected (port and direct) V-6 engine. Although the TRD Pro is available with a six-speed manual transmission, ours was equipped with the six-speed automatic, as most models sold will likely be. We’ve been impressed in the past with TRD Pro models, and we look forward to putting the Taco through its paces this week. 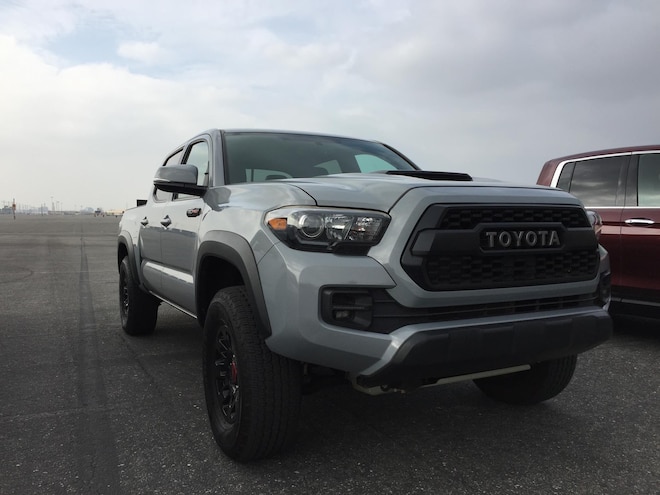 View Photo Gallery | 10 Photos
Photo 5/10   |   Truck Trend 2017 Pickup Truck Of The Year Toyota Tacoma Trd Pro
2017 Ford F-150 Raptor SuperCab
Perhaps the most eagerly anticipated contender in this year’s test, the 2017 F-150 Raptor, brings the most transmission ratios and highest horsepower to this year’s test, with 10 and 450, respectively. The Raptor’s legendary off-road capability is well-deserved, and the 2017 model raises the bar even higher with 3.5-inch Fox Racing remote-reservoir shocks with up to 13 inches of suspension travel. While there’s no disputing the Raptor’s off-road capability is formidable, so is its price tag at $61,840. However, that’s not the highest price tag in the test, which belongs to the other Ford. 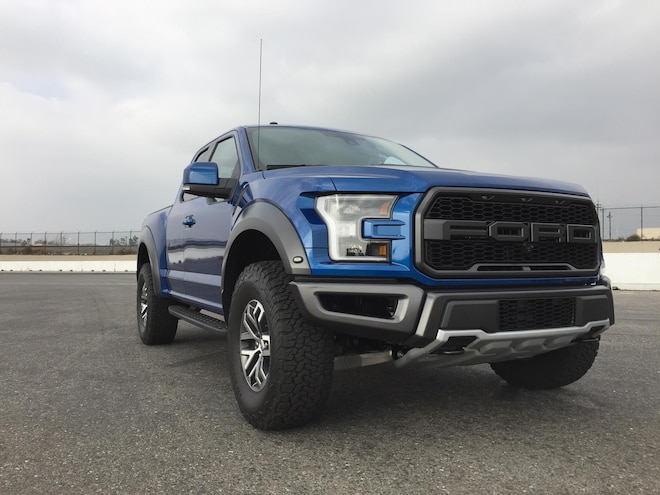 View Photo Gallery | 10 Photos
Photo 6/10   |   Truck Trend 2017 Pickup Truck Of The Year Ford F 150 Raptor
2017 Nissan Titan Platinum Reserve
In stark contrast to the bare-bones XD, Nissan provided us with the most luxurious example of the 1/2-ton Titan with a Platinum Reserve model. Although it shares its 5.6L V-8 and seven-speed automatic with the XD, its equipment level is in a whole other galaxy, with heated and cooled front seats, naviation, satellite radio, and driver-side memory seat and steering wheel, which is heated, by the way. To further emphasize is premium positioning, there’s also ample “Platinum Reserve” badging inside and out and open-pore wood trim. 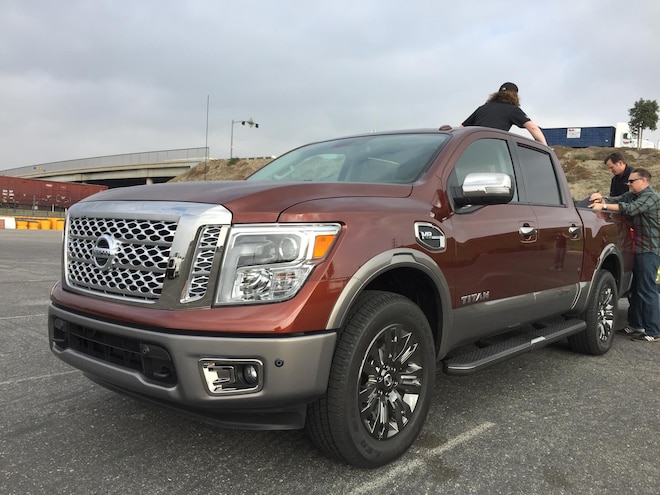 View Photo Gallery | 10 Photos
Photo 7/10   |   Truck Trend 2017 Pickup Truck Of The Year Nissan Titan Platinum Reserve
2017 Nissan Titan XD Standard Cab Gas
Remember when trucks were trucks? Nissan does, and it graciously provided an honest-to-goodness, no-frills example for us to test this year. We got a fleet-standard refrigerator white, long-bed, standard-cab Titan XD with the 5.6L Endurance V-8 engine. Compared to some of the other lavishly equipped specimens in this year’s test, the Titan XD’s cabin is decidedly Spartan, with cloth seats, vinyl floors, and no fancy whiz-bang 8-inch navigation screens. However, it does have Bluetooth hands-free calling, power windows and door locks, and a USB input. It will be interesting to see if our judges have been so spoiled and jaded by the newer trucks to penalize the XD for its simplicity or if it will earn brownie points for its earnestness. 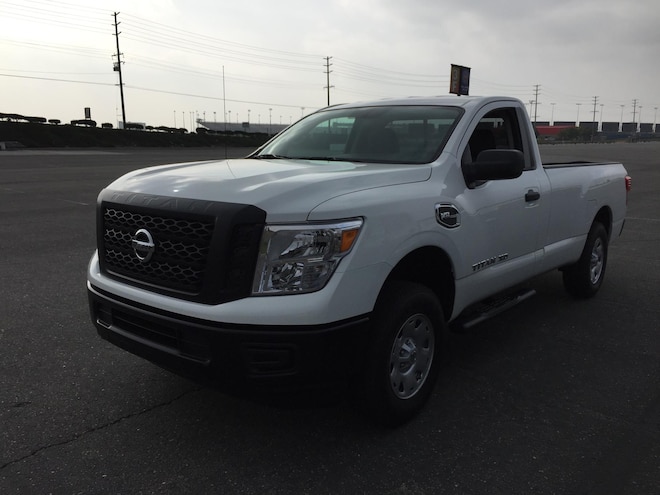 View Photo Gallery | 10 Photos
Photo 8/10   |   Truck Trend 2017 Pickup Truck Of The Year Nissan Titan Xd Regular Cab
2017 Ford F-250 Super Duty
In our first drive of the 2016 Super Duty, there was no doubt that Ford significantly raised the bar on the Super Duty’s refinement, capability, and technology. The Super Duty remains the HD class’ standard bearer in sales and capability. Our tester, in opulent Platinum trim, rang the register to the tune of an eye-watering $77,505, making it the most expensive truck of our test. For that sum, hardly any stone was left unturned in terms of equipment, with Ford’s excellent Sync 3 touchscreen system, heated and cooled front seats, power side steps, and of course, Ford’s ultra-refined and ultra-powerful 6.7L Power Stroke diesel with 440 hp and 925 lb-ft of torque. There’s no doubt the Super Duty is a capable tool, but its steep sticker startled several judges. 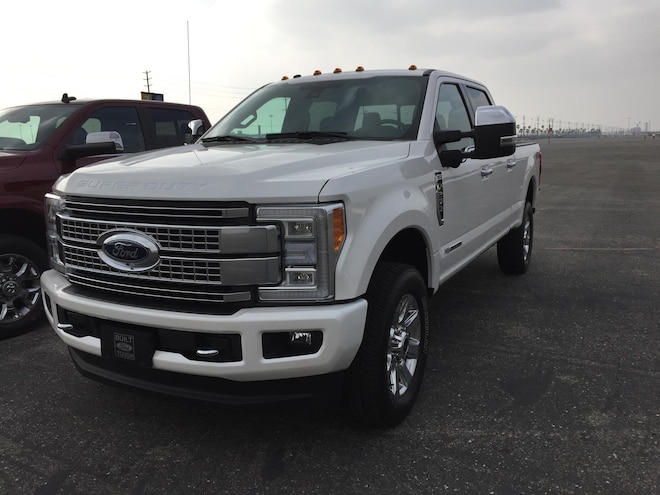 View Photo Gallery | 10 Photos
Photo 9/10   |   Truck Trend 2017 Pickup Truck Of The Year Ford F 250 Super Duty
2017 Ram 2500 Off-Road
How long have you heard us carry on about how much we’d like to see a Cummins-powered Power Wagon? Probably too long. It seems like Ram was listening as well, if the availability of the Ram 2500 Off-Road is any indication. Although not a full-fledged Power Wagon due to its lack of an integrated factory winch and sway-bar disconnects, the Off-Road package adds Bilstein shocks, a limited-slip differential, and underbody protection. The package is offered only on crew and Mega Cab configurations but can be added to all trim levels, from Tradesman all the way up to Laramie Longhorn and Limited. While we’re not expecting Power Wagon–level off-road prowess, we’re hoping the package lives up to its name with improved capability on the trail. 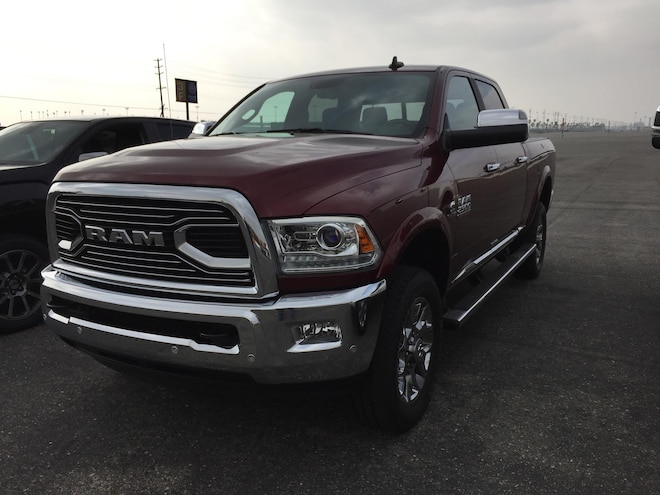