Doing the right things, and doing them right 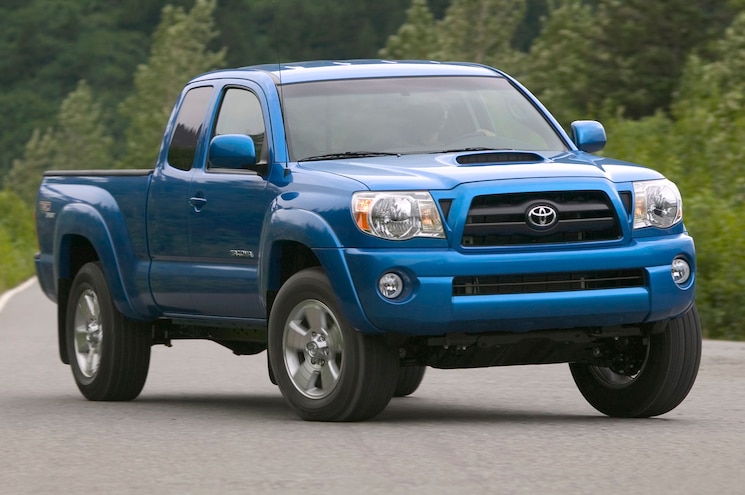 The resounding thud emanating from the pickup bed as we exited a sweeping lefthander got our attention: A 100-pound toolbox riding in the bed had come loose. To our amazement, the sides of the sheet-molded compound cargo box took the shunts from the toolbox with zero damage. It was a pleasant surprise, one of many we experienced in the new Tacoma, Motor Trend's Truck of the Year for 2005.

Like you, we appreciate a truck that can take abuse. All too often in the past, that meant some industrial-grade machine with not much more than a whiff of creature comforts and sophistication, but we're betting you don't want to be stuck driving something that dishes out its own abuse. And that may just be the essence of what Toyota has achieved with the new-from-the-ground-up Tacoma. 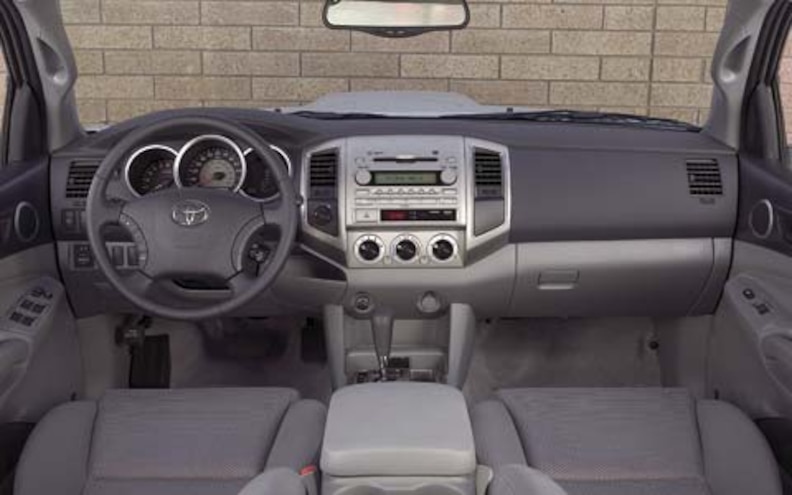 View Photo Gallery | 8 Photos
Photo 5/8   |   Wider truck allows for bigger glovebox, a wider center console with three cupholders (on Access Cab and Double Cab models), and deeper map pockets in doors, good to hold two beverage cans each. The seats are larger, and travel has been increased by two inches. Hip and shoulder room increase by three or four inches across the board. And front-seat headroom increases by more than an inch. Jewellike LED gauge illumination is always on, even when the lights are turned off.
It's tough in all the places you want a truck to be tough; there's a choice of two torque-rich engines, a stiff frame, and stout underpinnings. Yet it's a far sight less hard-edged in the cabin where you spend most of your time. All carmakers use hard plastic in the interiors of their small trucks, but Toyota has found a way to make the patterns, colors, and surface textures on the dash, console, and door panels look engaging, something you might see in a considerably more expensive near-luxury sedan. Fiddle around with the controls, and you won't feel penalized for not spending more money on a full-size truck. Switchgear has the touch of durable goods. Seats and steering wheels don't shout "lowest-cost supplier." One editor commented, "For its price class, the Tacoma has the best materials, fit, and finish." Another editor added, "The interior is sweet with good ergonomics, and the seats could be right out of a German sport sedan." 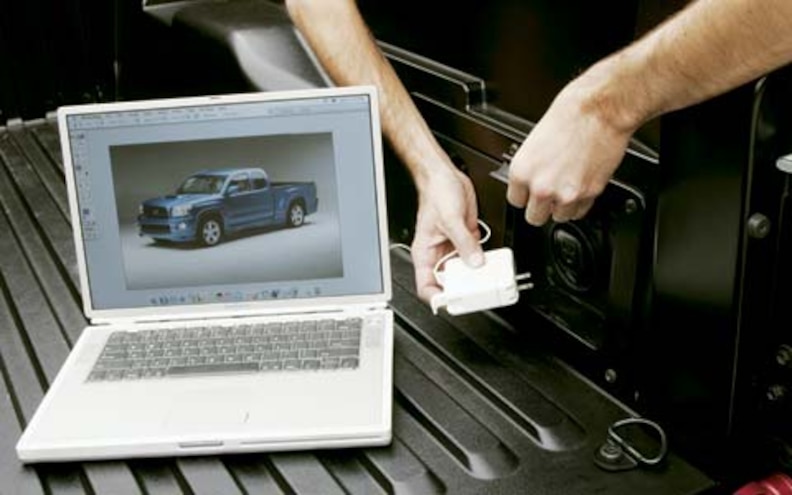 View Photo Gallery | 8 Photos
Photo 6/8   |   Beds are an inch shorter than last year's, but the long bed is now available on the Double Cab. All beds are 2.1 inches deeper than last year's, and the width between the wheelwells is up 0.6 inch. Optional with the TRD Sport Package is a 115 volt AC power outlet.
As Toyota puts it, "The Tacoma has moved beyond compact dimensions." It no longer looks like a small truck, thanks to a wider stance, large fender bulges surrounding upsized wheels and tires, sweeping headlamps, and a larger windshield. In terms of dimensions, the new Tacoma is in the hunt with other midsizers, such as the Dodge Dakota, Chevrolet Colorado/GMC Canyon twins, and the Nissan Frontier, while wider, heavier, and more substantial than the compact Ford Ranger and Mazda B Series. Compared with last year's Tacoma, the new truck is four to six inches wider, has a taller cabin, and is roughly 5.5 inches longer.
To cope with the 400 or so pounds of added weight the larger size brings, engines got upsized, too. New is the base 2.7-liter VVT-i four-cylinder with 164 horsepower and 183 pound-feet of torque, up 15 percent from last year's 2.4-liter base engine with 142 horses and 160 pound-feet of torque. This is an engine totally revamped from last year's 150-horse, 177-pound-foot, 2.7-liter four on PreRunner and 4x4 models. The optional 245-horse, 4.0-liter VVT-i V-6 comes courtesy of the 4Runner and pumps 29 percent more power than the previous 190-horse, 3.4-liter six-banger. It makes nearly as much normally aspirated power as the TRD-supercharged version of last year's 3.4-liter V-6. Variable intake-valve timing sweetens the tractability of both of the Tacoma's engines, the only downside being that the new V-6 requires pricier premium fuel.
Transmissions are upgraded on V-6-powered trucks, with a five-speed automatic shared with the Tundra and 4Runner replacing last year's four-speed and a six-speed manual from the V-6 Tundra taking over from the previous five-speed gearbox. Toyota has strengthened its hand in towing capacity, trumping GM's Colorado and Canyon twins. It remains at 3500 pounds for the four-cylinder via the step bumper, rises to 5000 pounds for V-6 models with a receiver, and the new truck adds a 6500-pound capacity with a special package consisting of engine and transmission coolers, upgraded alternator and battery, a seven-pin connector, and a receiver hitch. Unfortunately, payload ratings are down from last year anywhere from 100 to 300 pounds depending on the model.

The new truck comes with a full roster of electronic aids. Anti-lock brakes with electronic brake distribution and brake assist are standard. The 4x4 Tacoma can be optioned with Downhill Assist Control, which automatically pulses the brakes to maintain a steady five-mph speed while descending steep trails and tracks. All Tacomas with automatic transmissions can be equipped with Hillstart Assist Control, a system that applies the brakes to keep the truck from drifting back when starting out on a steep hill. Models with the off-road package have a differential lock, and those without the off-road package offer a system that uses the ABS to simulate a limited-slip differential (except the sport-tuned X-Runner). All Tacomas except the X-Runner are available with VSC stability control and traction control, systems available only on 4WDs last year.
There are no strippos: Even the base 2WD regular-cab truck features standard carpeting, a CD player, tilt/telescope steering wheel, tachometer, digital clock, an SMC composite bed with utility rail system, and a flush rear bumper. Automatic transmission Access Cab and Double Cab models get a gated shifter.

View Photo Gallery | 8 Photos
Photo 7/8   |   2.7L I-4
The Tacoma is full of surprise and delight features. We already mentioned the standard fiber-reinforced sheet-molded-compound inner box that took those toolbox shunts so well on the mountain road; it won't rust and it resists dents. Included with the SMC bed is a deck-rail utility system with four tie-down cleats that slide in channels and can be adjusted to various positions. Two more tie-down rings are bolted to the rear of the cargo box floor. There are four (nonlocking) storage boxes on the inboard sides of the cargo box. Available with either of the TRD option packages is a 115-volt, 400-watt three-prong outlet with hinged cover. A host of bed accessories include lockable overrail toolboxes, lockable crossbed box, or locks for the standard in-fender boxes. A bed divider, bed net, cargo crossbars, Yakima roof rack, and a bike rack also can be added. Other accessories include runningboards, a flip-out bed extender, SnugTop Super Sport hard shell, and a rubber bed mat.
When it comes to compact and midsize pickups, the Tacoma is the broadband of the industry. The new Toyota truck is available in 18 different configurations. There are three cab sizes, three wheelbases, and two bed lengths. An editor wrote, "Toyota comes out swinging from the get-go with a huge roster of truck variants." Arguably, there's a Tacoma for nearly every purse and purpose, ranging from $13,980 (including destination) for a base two-wheel-drive regular cab four-cylinder model to more than $30,000 for a loaded, TRD-equipped V-6 automatic Double Cab 4x4.

View Photo Gallery | 8 Photos
Photo 8/8   |   4.0L V-6
Toyota's created a lineup of trucks with far-ranging personalities, from the pool man's truck to a loaded 4x4. A newly configured extended-cab model, the Access Cab, replaces last year's XtraCab and offers dual rear access doors for the first time. These rear-hinged half-doors, available on most competitor's trucks for the better part of a decade, allow easier accessibility to the rear of the cabin. Finally, Toyota's smaller pickup has them.

The Double Cab, now with rear doors that are about three inches longer than last year's for easier ingress and egress, is available with a long bed as well as the short bed. The long-bed Double Cab covers more real estate than a Chevy Suburban and allows the driver the luxury of not having to choose between taking passengers or cargo--there's room for both.
Although the rear seatbacks on Access Cab models are straight and suitable only for children, the Double Cab's seats recline at a comfortable angle with room for five adults. Both cabs feature tumble-flat rear seats with underseat storage, the Double Cab adding more stash space in the rear bulkhead. Most passenger-side front buckets fold flat to form a tray table.
The Toyota Pickup was one of the first small trucks (next to the Datsun 1200 pickup) sold in the U.S. and helped popularize that segment in a country accustomed to full-size trucks. Now the new Tacoma keeps the brand's reputation for durability and long-lasting quality, while expanding the model matrix to a wider audience. The new truck proves there is no penalty for buying a reasonably sized, more fuel-efficient truck, especially significant in this time of rising fuel prices. We call that a superior combination and worthy of the mantle, Motor Trend Truck of the Year.

Sports-car aficionados may take issue, but a new breed of sport-compact truck is giving the blueblood brands a run for their money. Consider Toyota's new Tacoma X-Runner sport truck. It comes tunerized from the factory with lowered suspension (one inch front, 3/4 inch rear), the 4.0-liter V-6, six-speed manual gearbox, 18-inch wheels, 45-series Bridgestone Potenza RE050 tires, and a body kit with a hood scoop, fender flares, front and rear spoilers, and ground effects. It's sold only as an Access Cab, replacing last year's S-Runner in the lineup.

A specially braced frame is said to improve torsional rigidity, quicken steering feel, and transitional response. Front springs are 50 percent stiffer, and rear leafs are less progressive. A high-performance Big Brake system on the X-Runner has 13-inch internally vented front discs, four-pot calipers, large high-friction pads, and braided steel lines, good for linear pedal feel and reduced fade. The handling target was the Nissan 350Z with lateral acceleration numbers approaching 0.9 g. Our tests validate Toyota's claim with a recorded skidpad number of 0.89 g and a rollick through the slalom cones at an un-truck-like 65 mph.
If you can tolerate the truck's more abrupt ride quality, you can play with sports cars costing thousands of dollars more. One editor remarked, "The X-Runner is a testament to the remarkable bandwidth of the Tacoma platform. It makes a convincing argument as an appliance of sporting transport." Some editors felt the body cladding was a bit overdone and heavy-handed: "They should've consulted with BMW's M or Mercedes's AMG on how to sportify a production-based unit." But others felt the X-Runner had the potential to spark the sport-truck segment. The fact that the mods to make a Tacoma into an X-Runner are so comprehensive indicates Toyota wants to play in this game.

- OF
By Ron Sessions
53 Articles