Everybody's All-American: Winning Hearts and Minds with Something for Everyone, and All of It Good. 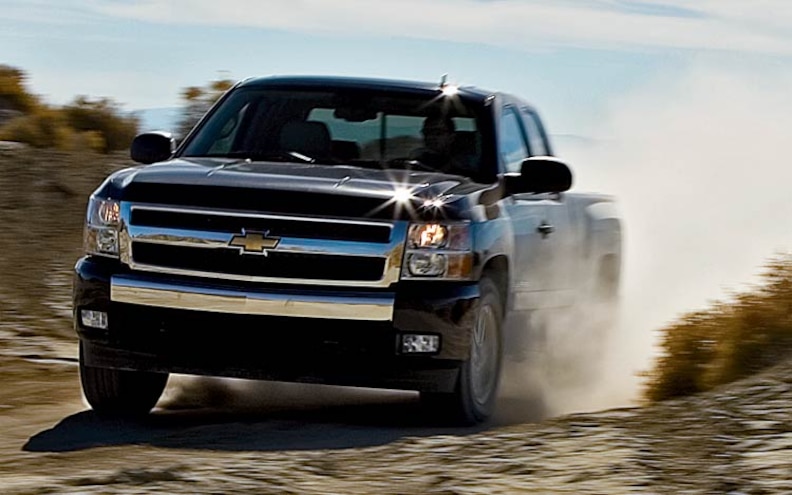 Did you ever notice that the model-life-span of most new vehicles is about the same as a presidential term of office? New car models get voted in about every four years, but pickups--being immensely popular in the United States of Home Improvement--generally hang around for two terms. And because full-size pickups are also immensely profitable, the major parties tend to spend those eight years paying their best and brightest product planners and engineers to research and develop the next blockbuster candidate. These folks aren't dummies, so when a new breadwinner arrives--and the rivals always stagger their intros to hog the lion's share of the limelight for a year--it's big news, and a strong contender for Truck of the Year glory. This year, it's the Grand Old Car Company's turn, with a new Chevy Silverado and GMC Sierra.
One of the three pillars of every "of the year" contest is significance, and on that score this contest was the GMT900's to lose. Sales of the two brands tally well over a million units year in and year out, owing to the multitude of combinations and permutations of cabs, beds, drivetrains, and suspensions offered. There truly is a truck for every purse and purpose from the entry-level construction worker's no-frills V-6 work truck, to the fully loaded limo version his boss will drive to the building's gala grand opening. But market significance doesn't energize the Truck of the Year voter base, so at the beginning of our hellish week of testing, the Silverado and Sierra had plenty to prove, and, as it turned out, each other to beat. 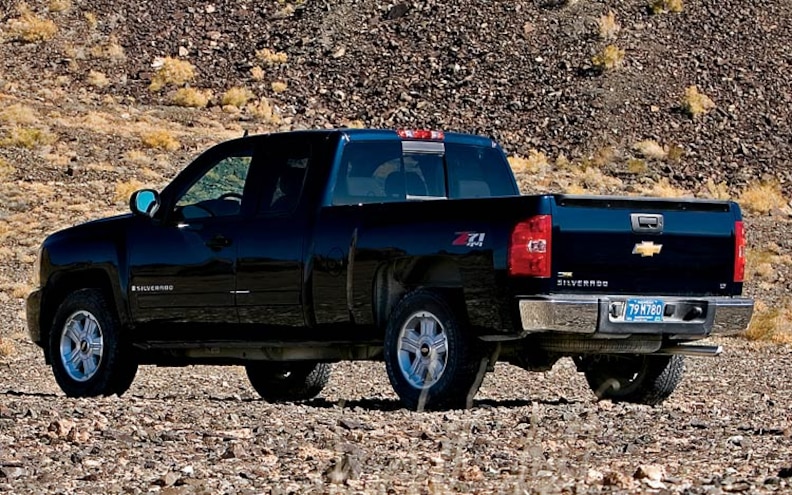 View Photo Gallery | 9 Photos
Photo 2/9   |   2007 Chevrolet Silverado rear View
Both trucks make an excellent first impression with fresh styling that differentiates the brands well. Our eyes gravitate slightly toward the Chevy's chrome-bisected grille and brawnier square-shouldered quarter panels. The interior design is even more impressive than the sheetmetal, with Chevy's fake wood earning higher marks than the Cadillac's timber. All the sheens, textures, and colors suggest that GM's benchmark may have been Audi sedans, rather than Ford, Dodge, Nissan, and Toyota pickups. Even the entry-level dash fitted to our Sierra looks classy. And our appreciation of this cabin only deepened while blasting down the highway or bouncing down the orchard trail. The seats (front and back) offer great support, and the interior's hush was never disturbed by a squeak or a rattle.
The new cargo bed earned high marks for utility, especially as equipped with a $175 cargo-management system (aluminum rails with adjustable tie-down anchors around the upper edge of the bed) and the $95 springloaded EZ-Lift tailgate. The judges also appreciated that the sides of the bed are low enough to reach over, unlike the cargo boxes on the Avalanche and Escalade EXT and the current Ford F-150. 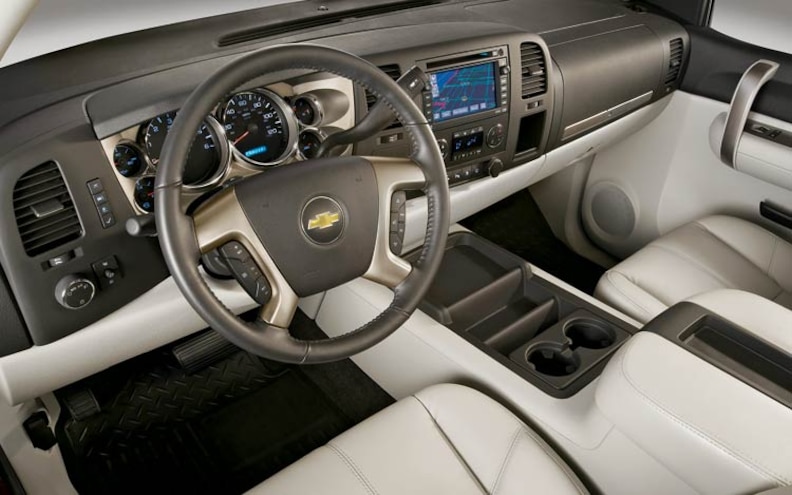 View Photo Gallery | 9 Photos
Photo 3/9   |   2007 Chevrolet Silverado interior View
Our Chevy's 5.3-liter V-8 featured fuel-saving Active Fuel Management (and a nifty dash readout to indicate when it's operating in V-4 or V-8 mode), boosting fuel economy to an EPA-rated 16 mpg city/20 highway. Among its peers, only the Dodge Ram Hemi offers a similar system, but its EPA numbers trail by one mpg each. Some voters expressed reservations about the overall smoothness of the engine and the four-speed automatic's shift quality, but this drivetrain motivated our 2.5-ton four-wheel-drive truck to 60 mph in a respectable 8.2 seconds--that's 0.3 second quicker than a rear-drive 5.4-liter Ford F-150 (our last full-size TOTY), and 0.4 second ahead of the Dodge Ram Hemi 4x4. What's more, that figure only stretched by 1.2 seconds when carrying a 1050-pound load (900 pounds slowed our 2004 Ford by the same amount, and 1050 added 1.3 seconds to the Dodge). In our boat-towing test, all five contestants saw their 1/8-mile acceleration times stretched by about a third (around three seconds each), with trap speeds dropping by a quarter. Fitting a bigger engine or shorter gearing will only widen the Silverado's (and Sierra's) lead in cargo toting and towing contests.
Numbers only tell half the story, though. Our judges were highly impressed with the Silverado's composure when the bed was loaded. The truck didn't ride down on its bumpstops, and while the front end felt a bit lighter, there was no loss of control. Engaging the transmission's Tow/Haul mode tailors the shift logic, improving acceleration and deceleration performance by delaying upshifts under acceleration and downshifting early when slowing or braking. Loaded or unloaded, the new rack-and-pinion steering drew high praise for its direct feel and isolation from undesirable road inputs. 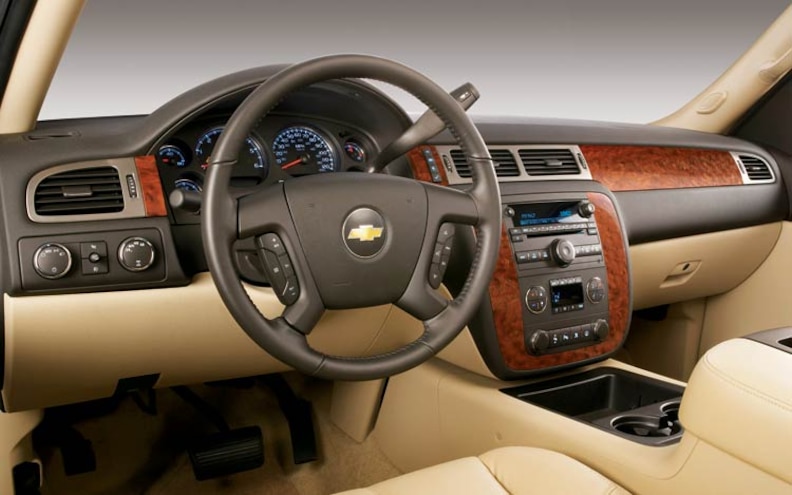 View Photo Gallery | 9 Photos
Photo 4/9   |   2007 Chevrolet Silverado dash View
Our lighter, lower-spec GMC's Z71 off-road package riding on 265/70R17 tires felt considerably more compliant--on-road and off--than did our Chevy's Z60 high-performance setup, with its low-profile 275/55R20s. The Silverado was described as "bouncy" and accused of inciting copious "gut-jiggle" over washboard surfaces (presumably among editors lacking washboard abs). Of course, in terms of suspension, Chevy and GMC both offer a wide range of options.
A long week of testing served to satisfy our judges that the new General Motors full-size pickups had earned top marks on the superiority front, and by restricting the price-increase to about $300 on most models, the Chevy and the GMC also scored well in the Value category. All that remained was to select a winner among these closely matched contenders. To do this, we first examined the breadth of each model line. The bottom rung at each brand is a no-frills work truck priced at $18,760. The Chevy range will eventually be topped by a Silverado SS performance model, while the GMC line will be capped by a Sierra Denali lux-truck. Each is likely to employ a detuned version of the Cadillac Escalade's 6.2-liter V-8, but the Chevy will price out a bit cheaper and be the big volume seller.
In the end, as so often happens in politics, a popularity contest was used to determine the result. With all precincts reporting, the better-known, higher-selling Chevy Silverado gets the nod as Motor Trend's Truck of the Year for 2007.