Built to the 9s: With two helpings of sport and a healthy dose of utility, the Mazda CX-9 outperforms this year's field

You've heard Mazda's marketing spiel before. From "Zoom-Zoom" to the "Soul of a Sports Car," the brand's ad gurus have pushed harder than starving telemarketers to convince shoppers that Mazda's cars and trucks are sportier and more fun to drive than the competitions'. 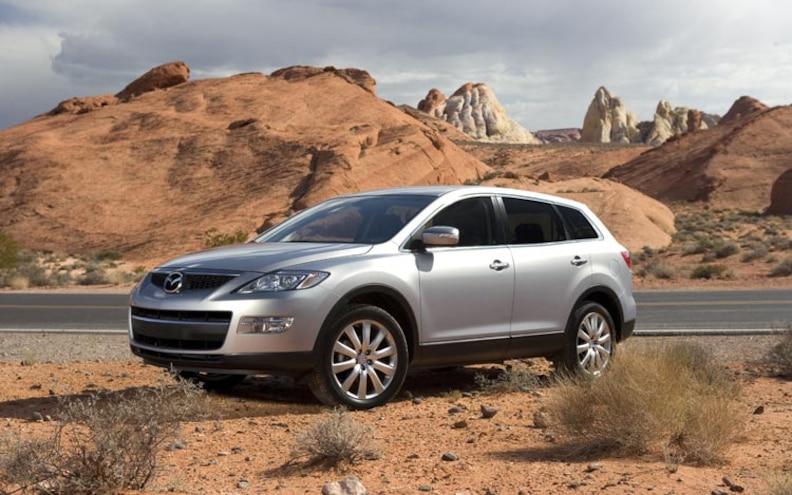 View Photo Gallery | 12 Photos
Photo 2/12   |   2008 Mazda Cx 9 front Three Quarter View
Generally, those slogans hold true, as Mazda's vehicles-from the rotary-powered RX-8 and the exuberant MX-5 to the minivan-esque Mazda5 and the rakish CX-7-indeed deliver quick, agile (okay, zoomy) sensations that are akin to, well, a sports car. As the only Japanese car company to ever win the 24 Hours of Le Mans endurance race, Mazda knows a thing or two about sports-car DNA and, more important, how to inject it into just about everything it slaps the winged badge on.
But could Mazda really inject that DNA into its first-ever three-row, largest-in-the-lineup crossover? Well, after three days of testing 11 vehicles at the dragstrip and skidpad, in and around greater Los Angeles, and on the twisty, high-elevation roads that squiggle through the mountain town of Lake Arrowhead, we're here to report that the CX-9 is not only Mazda's finest demonstration of infusing sports-car qualities into an SUV, but also Motor Trend's 2008 Sport/Utility of the Year.
As the saying goes, it's all in the details, and that's where the CX-9's sporty personality shines. Slide behind the leather-wrapped steering wheel and into the nicely bolstered bucket, and you're treated to one of the most comfortable, driver-focused seating positions available, not just in an SUV but in any vehicle. Whether you're five-two or six-two, finding that perfect spot is a snap: Simply fine-tune the driver's seat that power-adjusts in eight ways (standard on Touring and Grand Touring trims), tweak the steering column that modifies for reach and rake, and the result is nest nirvana: The pedals seem to welcome the balls of your feet; the RX-8-size steering wheel, with audio and cruise controls, appears to come right to your hands; and the stylish T-shaped dash, with its large, metal-rimmed gauges and simple but elegant center stack, delights aesthetically and ergonomically. The cabin, which, on our Grand Touring tester, is adorned with rich plastics, faux wood, and two-tone leather, not to mention calming indirect blue lighting and a pleasing mix of horizontal and vertical elements, manages to feel enveloping yet still plenty airy, an uncanny combination unmatched by this year's competitors.
The exterior details exude sport as well, and when looking at the CX-9, certainly with the GT's polished, 20-inch alloy wheels (18s are standard on Sport and Touring trims), it's hard not to feel racy. From the steeply angled windshield and sharp fender flares to the slanted headlamps and the distinct trapezoidal chrome exhaust tips, the CX-9 puts a spin on the traditional two-box sport 'ute and punts it into orbit. While arguably not as bold as the bigger and bulgier Enclave, the CX-9 nevertheless makes the class-competing Highlander, Tribeca, and Veracruz appear conventional and unexciting by comparison. A 12/10ths-scale CX-7 only done better, the CX-9 is sleek and elegant, sporty and sophisticated, an SUV seemingly well suited for going to the mountains, midtown, or the market. 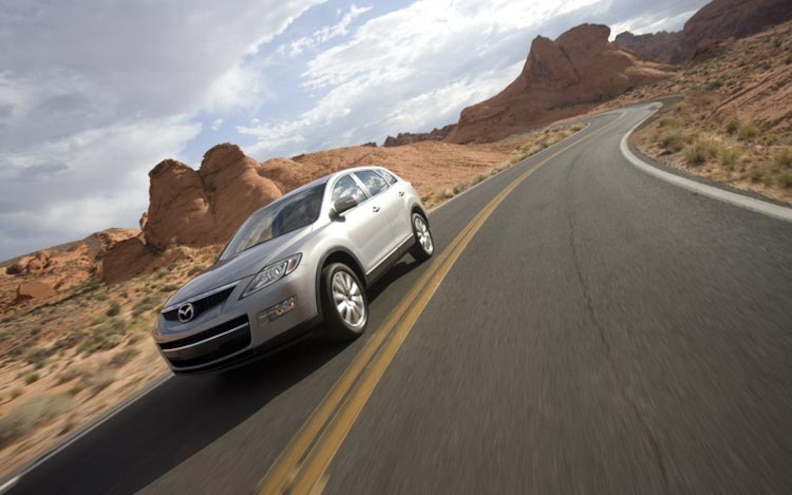 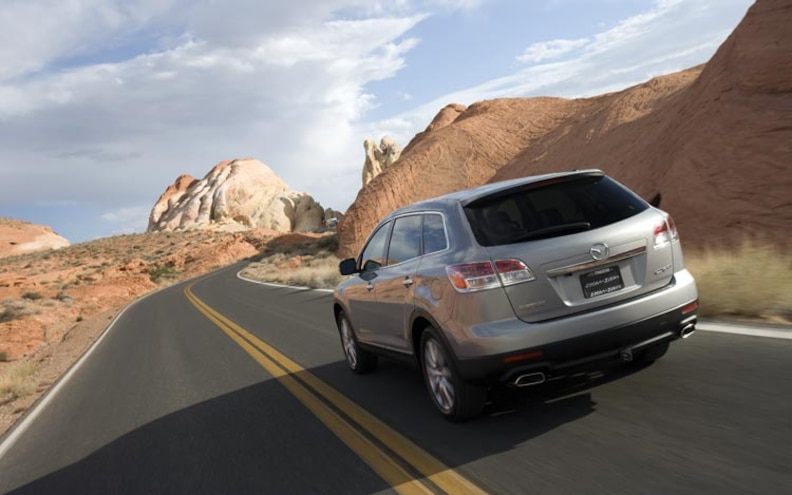 View Photo Gallery | 12 Photos
Photo 5/12   |   2008 Mazda Cx 9 rear Three Quarter View
Wherever you take the CX-9, rest assured there's plenty of room for the whole gang and their gear. Despite the sleek, flowing body that suggests tight quarters, the CX-9 boasts a spacious interior for seven, highlighted by more second-row legroom than in the Enclave, Highlander, Tribeca, or Veracruz, and more third-row legroom and cargo room behind that row than you'll find in the last three. Only the Buick, which dwarfs the other four in length, width, height, and wheelbase, offers more third-row legroom and cargo room aft than the Mazda.
Further, when a weekend run to IKEA is in order, the CX-9 presents 100.7 cubic feet of cargo space with the second- and third-rows folded flat, which equates to an extra ottoman compared with the Highlander (95.4) and an entire bedroom than the Tribeca (74.4). Of course, the CX-9 isn't perfect, delivering the least first- and third-row headroom (the latter a result of the sporty, slanted hatch) and the slightest first-row legroom of the five, but it does get points for providing a second row that slides roughly five inches fore and aft on both sides, leaving ample space for finding the third row (over two feet between the folded second row and the C-pillar). Six-foot adults won't mind the third row for short to medium trips, while kids will love it back there, especially if the CX-9 is equipped with the optional rear-seat entertainment system (not available with a moonroof) that features a nine-inch LCD and 5.1 surround sound with 11 speakers.

View Photo Gallery | 12 Photos
Photo 6/12   |   2008 Mazda Cx 9 profile
As amusing as a movie is on the go, though, avoid the second and third rows and opt for the driver's seat-the chair of choice. From here, the controls that count are at your beck and call, ready to react with the utmost responsiveness. Sink your spur into the well-calibrated electronic throttle, and the new-for-2008 3.7-liter V-6 shakes the reins on 273 horsepower, a 10-horse boost over the previous 3.5-liter. (If you're wondering why the CX-9 didn't play last year, the 2007 model went on sale after our cut-off date.) More important, torque has risen from 249 to 270 pound-feet, and, at 4250, is now realized 150 rpm earlier. While we still wouldn't mind a tad more low-end grunt, the 3.7 nonetheless behaves in a silky, refined manner, accentuated by a sporty growl from the dual exhaust. Mated to an Aisin six-speed automatic that's as seamless as a rubber glove, the Japan-built Ford-based V-6 scoots the CX-9 from 0 to 60 in 7.8 seconds and through the quarter mile in 16.0 flat at 87.8 mph, placing it ahead of every three-row midsize crossover in this year's field sans the sprightlier Highlander, which recorded 7.3 and 15.7 at 87.7.
Moreover, when full control of the powertrain is desired, the CX-9 offers a slick manumatic feature that, similar to BMW road cars and many race cars, downshifts with a push forward of the gearshift and upshifts with a pull back. Most automakers configure it the opposite way, but we feel Mazda (and BMW) get it right.

View Photo Gallery | 12 Photos
Photo 9/12   |   2008 Mazda Cx 9 front View
Around our 15-mile Lake Arrowhead handling loop, the CX-9 was arguably the most enjoyable sport 'ute to pilot, a reminder that SUVs ought to be exciting to drive. The steering, a Mazda hallmark, didn't disappoint, displaying a solid, on-center feel with zero play off-center and superb, linear response throughout the turning range. For clipping apexes and placing a vehicle within the inch, the CX-9, with its heavenly helm, is first-rate. Naturally, swallowing a set of esses is no fun without a composed chassis, and here, again, the Mazda excels. Based on modified Ford Edge architecture-the two share an engine box, some floor stampings, and basic front MacPherson strut and rear multilink suspension designs-the CX-9 provided a compliant, taut ride as well as best-in-field lateral acceleration (0.77 g) and figure-eight time (28.4 seconds at 0.58 g), testaments to its brilliant tuning. Much credit goes to the CX-9's transparent Active Torque Split all-wheel-drive system that can route up to 50 percent of available torque to the rear wheels depending on wheel speed, steering angle yaw rate, throttle opening, and lateral acceleration, but some due goes to the weight-saving measures, which include extensive use of high- and ultra-high-strength steel in such places as the front and rear frames, B-pillars, and sidesills. At 4633 pounds, the Mazda's no light weight, but compared with the two-row Edge (4511) and the cumbersome Enclave (5077), its dietary tactics are noticeable. Under braking, when fewer pounds equal fewer feet, the midweight Mazda, which slots between the 4268-pound Subaru and the Buick, posted a respectable 60-to-0 distance of 127 feet, a byproduct of four-wheel vented disc brakes and excellent pedal feel.
Firm believers in the best type of crash is the avoidable kind, we appreciate that the Mazda comes standard with an anti-lock brake system, electronic brake-force distribution, traction control, dynamic-stability control, and roll-stability control, which analyzes body-roll rate and wheel speed to determine if a momentary torque reduction and brake application are necessary to maintain the shiny side up. There's even a Blind Spot Monitoring system available for 2008. But should the sublime chassis and electronic aids not prevent the unavoidable, the CX-9 offers ample protection in the form of front, side, and side-curtain airbags as well as seatbelt pretensioners and load limiters. According to NHTSA, the safety net works, as the CX-9 received the highest scores (five stars) for front and side impacts, along with a four-star rollover rating.

View Photo Gallery | 12 Photos
Photo 10/12   |   2008 Mazda Cx 9 rear View
If you're taken aback by the thought of a $40,000 Mazda, don't be. Over 50 percent of CX-9 buyers have opted for a $33,950-$35,250 Grand Touring, which, when equipped as was our all-wheel-drive tester with satellite radio, navigation, moonroof, backup camera, power tailgate, Bose audio system, and a towing package, can often touch the $40-grand level. This territory, surprisingly, is not uncommon today among three-row crossovers, evidenced by this year's comparably equipped challengers, which range in price from $37,196 (Veracruz) to $44,245 (Enclave). The beauty of the CX-9 is that for just under 30 large, the core elements can be had in a front-drive $29,995 Sport version ($31,295 with AWD), which, among a few extraneous features, lacks only leather, 20-inch wheels, foglamps, Xenon headlamps, rain-sensing wipers, some chrome exterior bits, and a Smart Card key system compared with the GT. Roughly one-quarter of shoppers have snatched up a Sport-and for good reason. For a bit more luxury, the midlevel $32,210-$33,510 Touring has garnered the remaining quarter and perhaps offers the optimal compromise with standard leather, heated sideview mirrors, and Bluetooth. While all-wheel drive is a $1300 option across the range, front-drive versions still deliver the trademark dynamics, according to Mazda, thanks to special suspension tuning that provides that critical ride, handling, and steering combination.
Manufactured at the Ujina Plant No. 1 near Mazda's global headquarters in Hiroshima, the CX-9 was designed specifically for the North American market. It shows. Not only did Mazda do its research, creating an SUV with the ideal balance of sport, utility, and style, but it built the benchmark of the three-row crossover class. Move the needle like that, in the most important, competitive SUV segment, and you take home the calipers.