Get Smart: Fuel-Efficient, Capable, and Fun to Drive? Our Choice is a No-Brainer 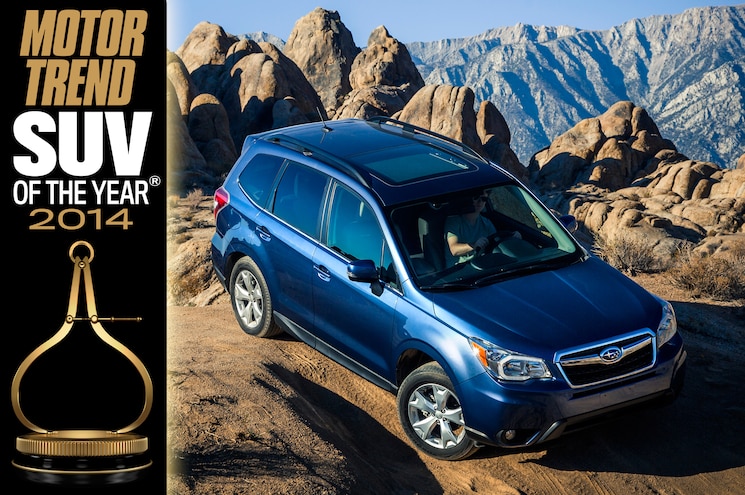 Subaru has a knack for making the right size vehicles for the marketplace, with just the right level of capability people want. As the SUV landscape has changed and traditional body-on-frame SUVs have been overtaken by unibody crossovers and sport/utes, Subaru has changed as well. It moved from selling smaller wagons to making unibody crossovers, and these vehicles resonate with buyers. The company's Forester and Outback have gotten larger over time, but not so large that they scare off loyal Subaru fans. Subarus aren't over the top or ostentatious; they're honest and smart.
The redesigned 2014 Subaru Forester has better efficiency, added power, and increased cargo volume, without a significant increase in overall size. The new Forester provides a comfortable ride with a roomy interior. Its off-road capability is plenty for the majority of sport/utility buyers. It offers a lot of value for the money. And it accomplishes all this while still being fun to drive.
For the 2014 Motor Trend SUV of the year competition, Subaru provided two models on opposite ends of the spectrum: the 2.5i Premium with a six-speed manual and the turbocharged 2.0XT with a continuously variable transmission. The base 2.5-liter four returns for 2014, now with a six-speed manual instead of a five, and its fuel economy has improved. The 2.0XT is powered by a new turbo flat-4 engine, with 26 more horsepower, 32 lb-ft more torque (available at a lower rpm), backed by a CVT instead of the four-speed automatic in the previous generation. Its fuel economy also improved for 2014. 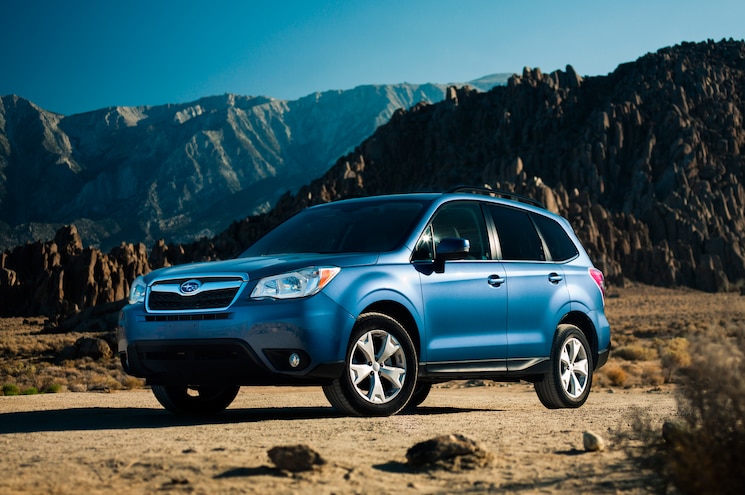 View Photo Gallery | 85 Photos
Photo 2/85   |   2014 Subaru Forester Front Three Quarter 02
When the drive loops began, one of the most pleasant surprises was revealed: This CVT is really good. Lieberman explained, "I was incredibly impressed with the CVT on the XT, especially when it's in Sport# and fakes up to 8 'gears.' Subaru went ahead and programmed it as aggressively as Porsche's PDK. When I was really flogging away on the XT, I'd look down at the gear indicator and observe that I was in '2.' Impressive." Not only is the CVT good, but editors had an absolute blast driving the Forester, describing it as being "quite tossable," and they enjoyed the XT's road feel and sportier suspension. It was quick at the track, too, where the XT reached 60 mph in 6.2 seconds. That's faster than the Acura MDX and the BMW X1 xDrive28i.
The Forester combines the practicality of a small, wisely engineered SUV with the fun enthusiasts will enjoy. Rave reviews came in as judges completed drive loops in both Subies. "I was whipping around Palmer Road in the XT, going about as fast and having just as much fun as I did in the SRT Jeep and the Audi SQ5 and thinking, '$28K.'" (Lieberman). "The XT really demonstrates the bandwidth of this chassis. For as athletic as the XT feels in S# mode, the ride quality in I mode is quite everyday livable." (Markus) "The whole vehicle has a very light, nimble feel to it, which makes it a lot of fun to hustle along twisting back roads. I had as much fun driving the Forester on-road as off-road." (Jurnecka) 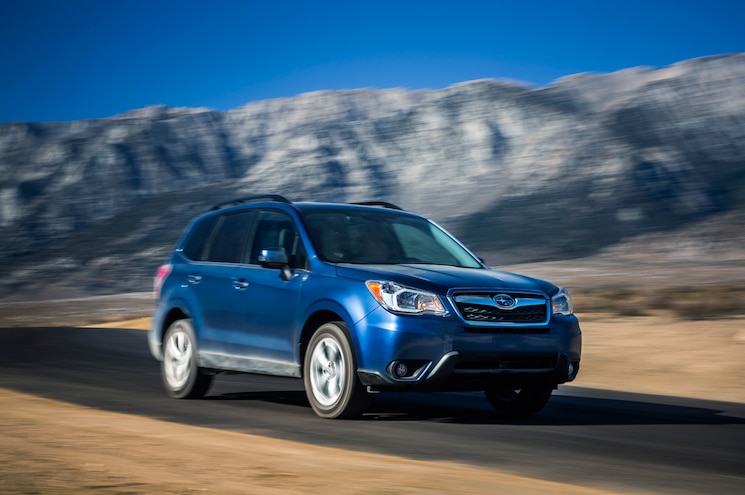 View Photo Gallery | 85 Photos
Photo 6/85   |   2014 Subaru Forester Front Three Quarters In Motion 07
All the judges agreed that the symmetrical all-wheel drive performed quite well on the off-road course. As more editors took the Foresters on the drive loop, they started to talk -- and the Subarus earned more praise with every passing loop. Lieberman added, "I was immediately hit by a sense of quality and refinement that was missing from most of the other SUVs present. It's as if real, honest-to-goodness chassis engineering had taken place." But as impressed as we were with the Forester on twisty roads, a vehicle has to do a lot more to win the calipers.

"Subaru is the manufacturer that has won this award the most times -- a hat trick."

If you consider Motor Trend's six criteria for Sport/Utility Vehicle of the Year -- advancement in design, efficiency, engineering excellence, performance of intended function, safety, and value -- the Forester nails nearly all of them. Consider value. Both Foresters we evaluated were well-equipped and came in with as-tested prices of $24,320 and $28,820. Lieberman noted, "The most refreshing part of the Forester is its honesty. Hey, look, cloth seats, and you get the idea that Subaru's not ashamed of them. Not every car needs to pretend to be a luxury item. There's something appealing about being a populist product." Loh was equally impressed with the Forester's value: "Jaw-dropping price on the base model: $24K with backup camera and cruise control." 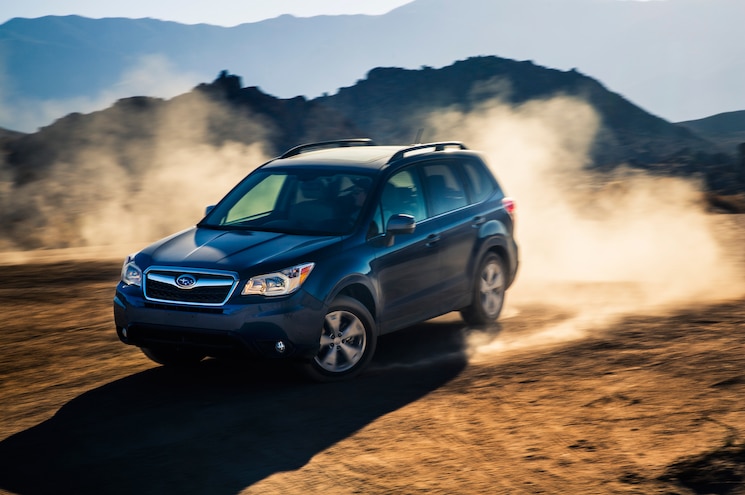 View Photo Gallery | 85 Photos
Photo 16/85   |   2014 Subaru Forester Front Three Quarters In Motion 04
Subaru makes SUVs that give buyers most everything they will need. Adding to the value inherent in this vehicle, the highly efficient 2.5 Touring got the best-of-test fuel economy at 21.9 mpg, and it was driven just as hard as the rest of the 2014 SUV of the Year contenders, if not harder, as the team wrung out this willing SUV on mountain roads. As for safety, the Forester has seven standard airbags, including a new driver-knee airbag for 2014, plus a brake override system, a fuel system cutoff when sensors indicate an impact is coming, and Subaru's ring-shaped frame reinforcement body structure to protect everyone on board. And the Forester is part of a fairly elite club: It is one of the few small SUVs to earn the IIHS' Top Safety Pick+ rating and was the first to excel at all the elements of the IIHS' small overlap front crash test.
There are many smart touches here. Visibility is excellent, and the cabin feels airy and spacious. Editors' notes revealed that they liked the interior upgrades, as well as overall vehicle packaging. Kiino said, "Great packaging. Exterior dimensions are relatively tidy, but back-seat room and cargo area are cavernous." Despite being on the smaller end of the SUV spectrum, interior packaging is fantastic, and there were little details that were done just right, things like the excellent driving position, actual knobs on the radio (which we encourage), and armrests in the second row. Judges noted that ingress and egress are quite easy. Also receiving positive notes were the materials in the cabin, which reflected Subaru's smart, practical nature. The manufacturer understands that these vehicles are going to be used by people who want to explore the great outdoors. These buyers hike and go kayaking and camping -- and bring their muddy dogs home. Subaru designers made sure the cabin's materials would hold up through it all. The interior prioritizes function over flash, and the result is an overall sense of refinement and quality. Plus, the Subaru achieves a surprising trio of SUV features: Step-in is low, yet seating position and ground clearance are high. At 8.7 inches, ground clearance is the same as the Grand Cherokee's is in Normal mode. 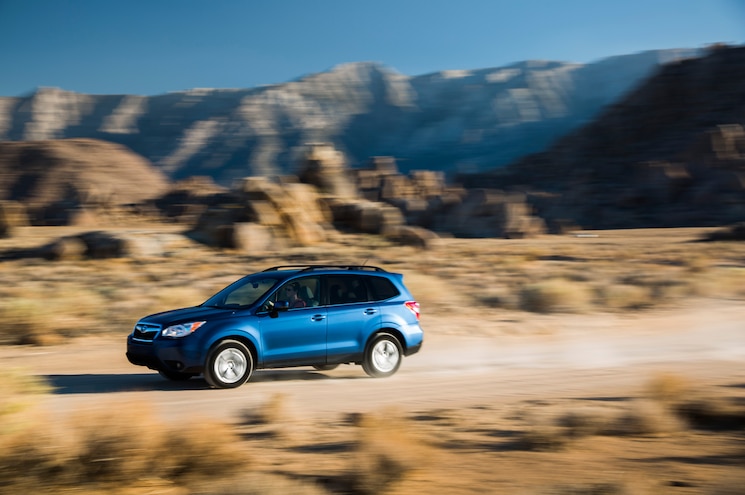 View Photo Gallery | 85 Photos
Photo 17/85   |   2014 Subaru Forester Side In Motion
The Forester did have weaknesses, though. The 2.5-liter engine is adequate, and the manual transmission shifter feels rubbery. There were a few complaints about wind noise. And those who expect an SUV to be able to tow a significant amount will be disappointed, as the Forester can only tow 1500 pounds. But Subaru knows plenty of small-SUV buyers won't need to tow much more than that.
The Forester hits five out of six criteria, but it can be argued that the Subaru is weakest in the Advancement of Design. The key to the Forester is that Subaru designed this vehicle with the right balance of practicality and fun, of on- and off-road capability, and did it at a price point right in the heart of the market. When it comes to Performance of Intended Function, the Forester hits the target. As Loh noted, "There's no excess. Yet the Forester has lots of sport and utility." 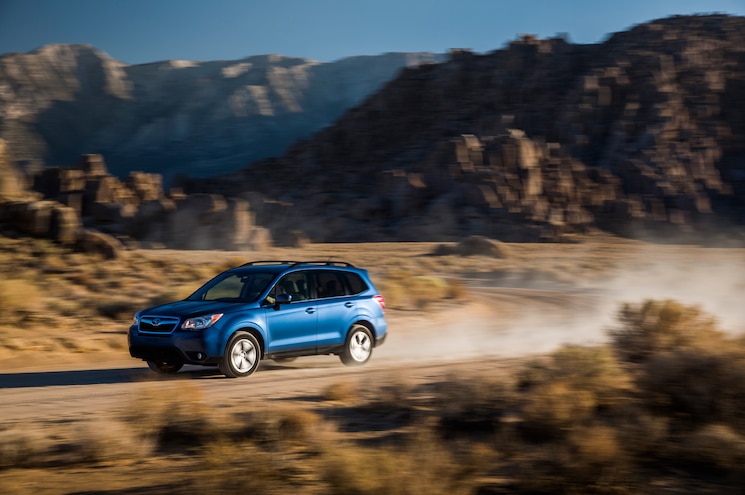 View Photo Gallery | 85 Photos
Photo 27/85   |   2014 Subaru Forester Front Three Quarter In Motion 03
For several years, Subaru has hit the sweet spot between those two key elements that define what an SUV is. That's why the Outback was selected as Sport/Utility Vehicle of the Year in 2010 and the previous-generation Forester earned the same award in 2009.
With the selection of the Forester as Sport/Utility of the Year for 2014, Subaru becomes the manufacturer to have won the award the most times, the only one that scored a hat trick.
But it makes perfect sense. The Forester has the right combination of attributes for many SUV buyers, and seems to do the impossible: It has more power than before, with better fuel economy, is fun to drive, offers generous ground clearance, and achieves all this at reasonable prices. The Forester isn't a wagon anymore. When a vehicle does this much and does it this well, it truly earns the title of Motor Trend's 2014 Sport/Utility Vehicle of the Year.