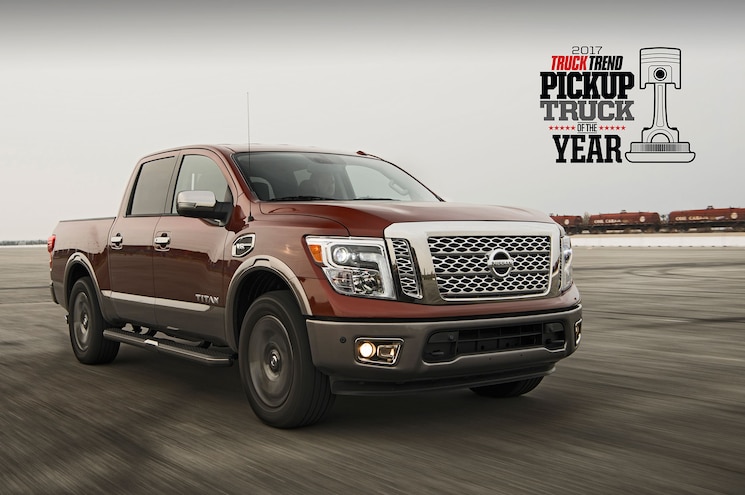 For more on the 2017 Truck Trend Pickup Truck of the Year, watch this space over the next few weeks, and be sure to pick up a copy of the May/June 2017 issue of Truck Trend for the full story!
The totals have been tallied, the votes counted, and ultimately, there can be only one. For 2017, it’s the 2017 Nissan Titan. As last year’s competition in which the GMC Sierra 1500 Denali nabbed the trophy, the Titan was expected to be a solid contender, but ended up being somewhat of a dark horse candidate. The most highly anticipated model of the competition was undoubtedly the all-new Ford F-150 Raptor. There’s no doubt the Raptor was a blast to drive on and off-road, and was packed with technology and drool-worthy hardware. However, at the end of the day, the Titan emerged as a more well-rounded truck that made more sense as a daily driver and as a pickup truck. 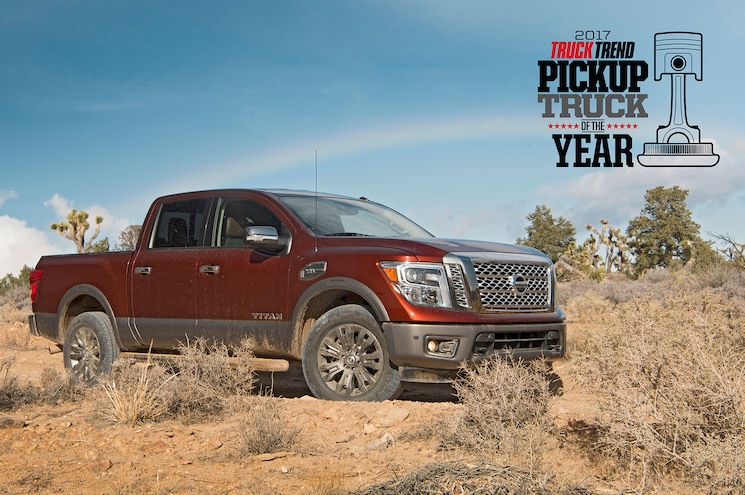 View Photo Gallery | 3 Photos
Photo 2/3   |   2017 Nissan Titan Pickup Truck Of The Year
The strong power and throaty sound of the 390-hp 5.6L Endurance V-8 won unanimous praise from the judges, giving the Titan ample power delivered through a seven-speed automatic transmission. The V-8 engine note was there when you wanted it, and quiet when you were cruising, never intruding on the comfortable, well-equipped cabin. And well-equipped is not an understatement. The top-line Platinum Reserve model had essentially every option you could get, minus a sunroof and the rear seat entertainment package. Among the highlights were Nissan’s Around View Monitor 360 virtual overhead camera display, heated and cooled front seats featuring Nissan’s exclusive “zero gravity” design, heated rear seats, a heated steering wheel, a memory function for the steering wheel, driver’s seat and outside mirrors, 7-inch touchscreen navigation and entertainment display, LED low-beam headlights, Titan Box in-bed storage compartments, and integrated trailer brake controller. All of this equipment for $56,595 including destination, well less than many comparably equipped peers, not to mention a class-leading 5-year, 100,000-mile bumper-to-bumper warranty.
The Titan was neither the fastest of the test, nor the most capable, ceding that territory to its stablemate Titan XD model in terms of payload, and the dedicated HD models for towing. What propelled Nissan’s new fullsize to the top was its combination of capability, comfort, value, and all-around practicality as a daily driver. In our eyes it represented the best overall truck experience for the money. For those reasons, we’re proud to name the Nissan Titan as Truck Trend’s 2017 Pickup Truck of the Year. 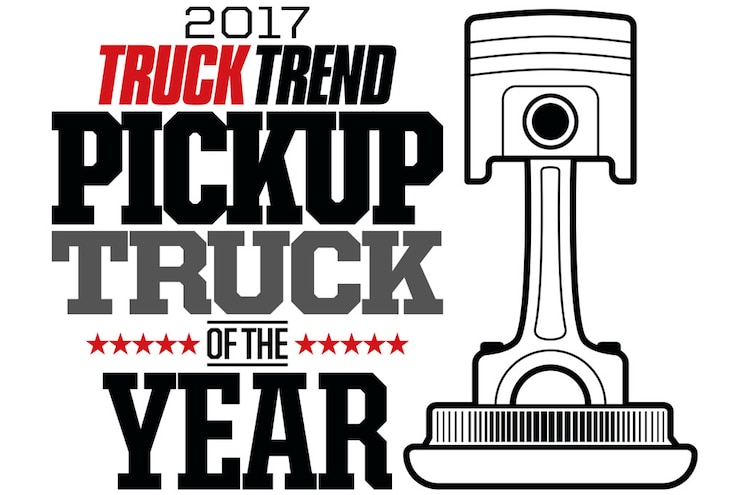 Sean P. Holman Rob Quigley Content Director PR & Social Media Manager, Marketing Truck Trend Network TEN: The Enthusiast Network (310) 531-9063 (323) 999-1411 SHolman@enthusiastnetwork.com RQuigley@enthusiastnetwork.com
About TRUCK TREND
TRUCK TREND®, a media brand of TEN: The Enthusiast Network, was founded in 1998 as an offshoot of MOTOR TREND, an internationally recognized automotive brand. TRUCK TREND, the authority on light trucks, is an industry leader in the truck category and, as the anchor brand of the TRUCK TREND NETWORK, has a total audience of more than 7 million. The brand tests and reports on sport-utility vehicles and crossovers, with an emphasis on pickup trucks, providing vital information to new-model shoppers and avid truck enthusiasts alike. Please visit trucktrend.com.
About Nissan North America
In North America, Nissan's operations include automotive styling, engineering, consumer and corporate financing, sales and marketing, distribution, and manufacturing. Nissan is dedicated to improving the environment under the Nissan Green Program and has been recognized annually by the U.S Environmental Protection Agency as an ENERGY STAR® Partner of the Year since 2010. More information on Nissan in North America and the complete line of Nissan and Infiniti vehicles can be found online at NissanUSA.com and InfinitiUSA.com, or visit the U.S. media sites NissanNews.com and InfinitiNews.com.
About Nissan Motor Co.
Nissan Motor Co., Ltd., Japan's second-largest automotive company, is headquartered in Yokohama, Japan, and is part of the Renault-Nissan Alliance. Operating with more than 247,500 employees globally, Nissan sold 5.32 million vehicles and generated revenue of 11.38 trillion yen (USD 103.6 billion) in fiscal year 2014. Nissan delivers a comprehensive range of more than 60 models under the Nissan, Infiniti, and Datsun brands. Nissan leads the world in zero-emission mobility, dominated by sales of the LEAF, the first mass-market, pure-electric vehicle. It is the best-selling EV in history with almost a 50 percent share of the zero-emission vehicle segment. For more information on our products, services, and commitment to sustainable mobility, visit our website at nissan-global.com/EN/.
About TEN: The Enthusiast Network
TEN: The Enthusiast Network is the world’s premier transmedia network of enthusiast brands, such as MOTOR TREND, AUTOMOBILE, HOT ROD, SURFER, TRANSWORLD SKATEBOARDING, and GRINDTV. With more than 60 websites, 50 publications, 50 annual events, the Motor Trend OnDemand subscription video-on-demand service, as well as the world’s largest automotive and action/adventure sports media platforms, TEN inspires enthusiasts to pursue their passions. For more information, visit enthusiastnetwork.com.
###