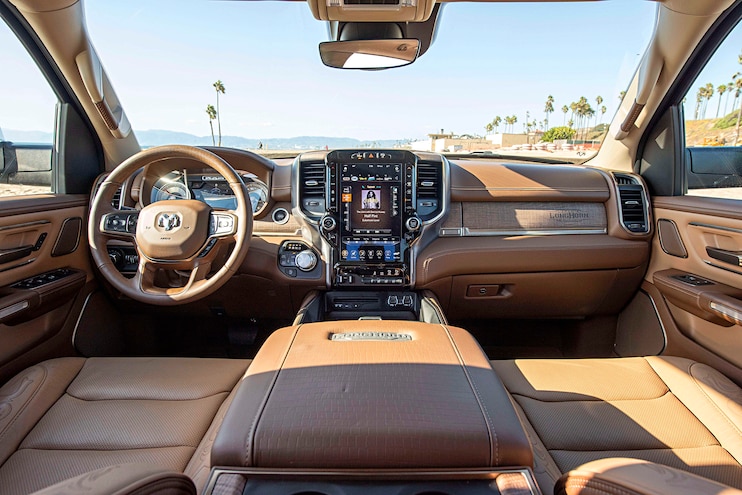 Our Pickup Truck of the Year scoring method uses seven weighted categories as the means to declaring a winner. The rundown is as follows: 15 percent Highway Performance (vehicle handling, ride quality, steering feel, NVH, and so on), 15 percent Towing and Hauling (how the vehicle reacts with a class-specific weighted trailer—7,500 pounds for ½-tons—and maximum payload), 15 percent Off-Road Performance (evaluating each vehicle’s performance and off-road–centric features such as traction aids, tires, and four-wheel-drive system operation in a specific off-highway environment), 10 percent Interior (instrumentation, ingress and egress, seat comfort, storage, appearance, driving position, material choice), 10 percent Exterior (styling, appearance, and features), 15 percent Functionality (passing power, parking prowess, ease of use of technology), and 20 percent Empirical Data (loaded and unloaded acceleration, braking, and quarter-mile; weight, pricing, fuel economy, and so on). These individual categories each contain a series of subsections on which each judge assigns a numerical value to (excluding Empirical). All of the judges’ votes are then tabulated, and total scoring is averaged and normalized.

Pickup Truck of the Year doesn’t happen in a vacuum, it requires the involvement of dozens of people and agencies spread all across the country, and we’d be remiss if we didn’t at least give them a shout out. First and foremost, we must say thank you to the men and women who make up the marketing and communications teams at each of the OEMs. Without their help and support, this test wouldn’t happen. Special thanks are due to Auto Club Speedway in Fontana, California, for allowing us use of its facility. For our spectacular photo shoot locations, thanks go to the Inland Empire Film Commission, California Film Commission, the U.S. Forest Service Mountain Top Ranger District, and California State Parks Oceano Dunes District. And a good location would be nothing without killer photographers; this year, we had two of the best along for the ride. Thank you both for putting up with us. And, lastly, a big thank you to Nissan, which graciously provided an ’18 Armada for use as a support vehicle during the week.