Pickup Truck of the Year Contender 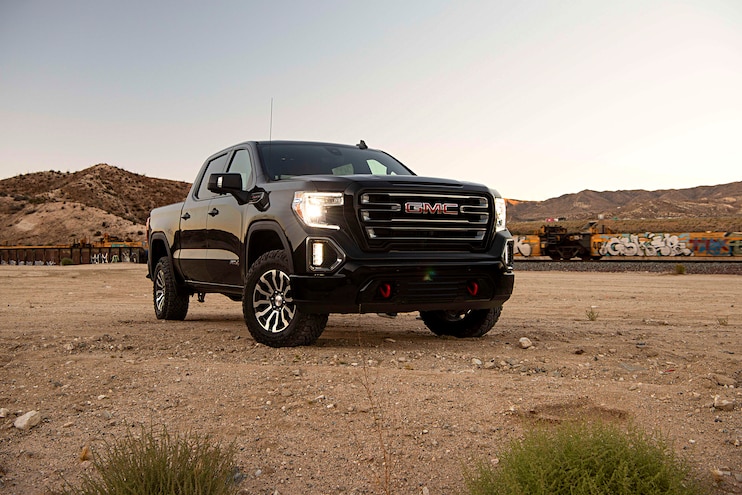 A New Era of High Class

It’s no secret that we’re fans of GMC. For evidence, look no further than our previous Pickup Truck of the Year tests, in which the Sierra 1500 Denali won for 2016 and the Sierra 2500HD Denali for 2018’s trophy. For this reason alone, we had high hopes for the all-new ’19 Sierra 1500. At our request, GMC delivered a pair of Sierras, one in Denali trim and the other AT4, both equipped with the company’s 6.2L V-8 engine and 10-speed automatic transmission.
While its Silverado cousin stunned the pickup-enthusiast collective, for better and worse, GMC’s debut of its all-new Sierra was met largely with a sigh of relief as it sported exterior panels more closely aligned with the outgoing generation. Folks were quick to brush off the pair of GM pickups in the past as mere clones of one another, but with this new generation, the Silverado and Sierra part ways fully (design-wise), sharing only glass, the rear doors, and roofskins.
For the ’19 Sierra, beauty is not just skin deep. While our judges share the same overall disheartened feeling over what could have been, GMC has improved upon its version of the new GM interior with copious use of leather and soft touch surfaces. Also sprucing things up is GMC’s use of real open-pore ash wood and genuine brushed-aluminum trim.
Where Chevy could have picked up a few points by sending a High Country instead of an LTZ, GMC capitalized with Denali and AT4. While we continue to lament the lack of adaptive cruise control, both GMCs showed off an impressive suite of technology that included the company’s class-exclusive head-up display and rearview camera mirror. Admittedly, our judging crew was split almost down the middle on the usefulness of these, with half loving them and the other half confused at their function.
Both GMCs were equipped with new HD Surround Vision camera systems, which interfaced amazingly well with their ProGrade Trailering app. Most impressive to the crew, however, had to be the new MultiPro tailgate, which comes standard on SLT, AT4, and Denali. With its ability to open to any of six different modes, these gates became the go-to workstation for filling out scorebooks and were definitely the subject interest during the week, with someone fiddling with one at every stop. We especially took a liking to the accessory Kicker audio system that was equipped on the AT4’s tailgate. One judge noted, “The MultiPro tailgate is an engineering masterpiece. How can anyone top this thing? Now if only it could dispense beer somehow.”
We still adore the 6.2L V-8 engine and its 420 hp. While we had issues in the past with the eight-speed transmission, this engine mated to GM’s new 10-speed automatic is a near-perfect combination. The pair towed and hauled with ease and managed to achieve very respectable fuel economy to boot. Our AT4 was equipped with the optional performance exhaust system, which adds 13 hp and 8 lb-ft of torque, along with a very aggressive tone. While not the quickest in the test, the AT4 trapped the highest quarter-mile speed with a three-run average of 99.2 mph and a single pass at 100.2. We were all impressed that a pickup with a lift and knobby tires was the first Pickup Truck of the Year entrant—ever—to break the century mark.
Speaking of lift and knobby tires, the Sierra AT4 is GMC’s answer to Chevy’s Trail Boss. It sports the same 2-inch lift with Rancho monotube shocks and the same Goodyear Duratrac tires. The AT4 also has an automatic locking rear differential and a complement of skidplates. Where the two trucks differ, however, is while Trail Boss comes in low- to mid-grade Custom and LT trims, AT4 is more similar to Denali. Our judges appreciated the upscale interior and available suite of technology applied to an off-road–oriented pickup. AT4 won a lot of fans when it came to exterior styling as well, scoring higher than all others in the test in that regard. “It’s amazing what a small lift and aggressive wheels and tires can do for an otherwise sedate truck,” noted one staffer.
While the AT4 sure looks the part, when it comes to actual off-road performance, there’s a bit left on the table. The Rancho shocks are good, but when compared back-to-back with the Bilstein units on Ram’s Rebel, their shortcomings become apparent. And while we appreciate the simplicity of the tried-and-true automatic locking rear differential, we’d like to see a selectable unit available on dedicated off-road models such as this—if nothing else, for our own peace of mind that it’s engaged. Interestingly, we also noticed after our test that both Sierras lost grille shutters during water fording. How and when this happened is still a mystery, and one we’re not real fond of.
On the highway, AT4 rode quite well. Denali, however, crushed it. Thanks to its exclusive Adaptive Ride Control, the Sierra Denali was one of the smoothest on the highway. Similar in application but differing in function, the new Adaptive Ride Control system works much like MagneRide of old, quickly sensing road conditions and adjusting dampening accordingly. The system really shined when loaded with payload or a trailer. Our judges had a really difficult time determining which had the better ride, the Sierra Denali or Ram Laramie Longhorn.
In the end, the duo of Sierras gave up just enough points in each category to keep GMC out of the top spot. Sierra’s exterior styling is clean and classy, and it’s loaded with enough technology to stay relevant in this changing world. A different shock package for AT4 and a couple tweaks to the interior, and we’re certain GMC will be on the top in the future.
WE LIKE: Powerful and efficient 6.2L EcoTec3 V-8 engine and 10-speed transmission, real wood and aluminum interior trim, throaty rumble from the optional performance exhaust, classy exterior styling, amazing MultiPro tailgate
WE DON’T LIKE: Interior still looks dated despite added trim, broken grille shutters, Bose stereo is best in years but still leaves something to be desired