All The Spice, Half The Price 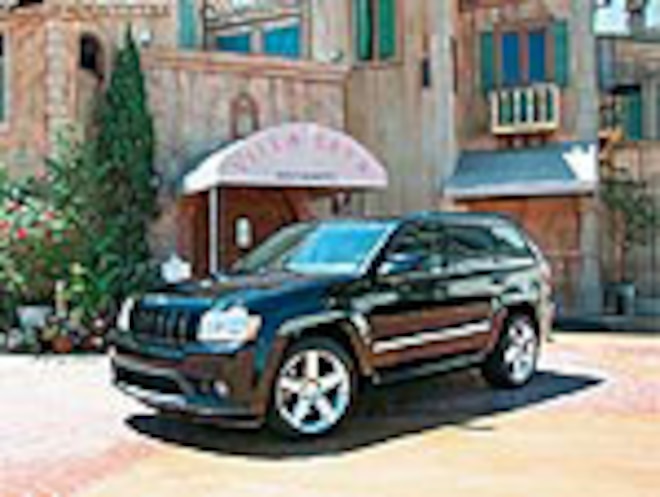 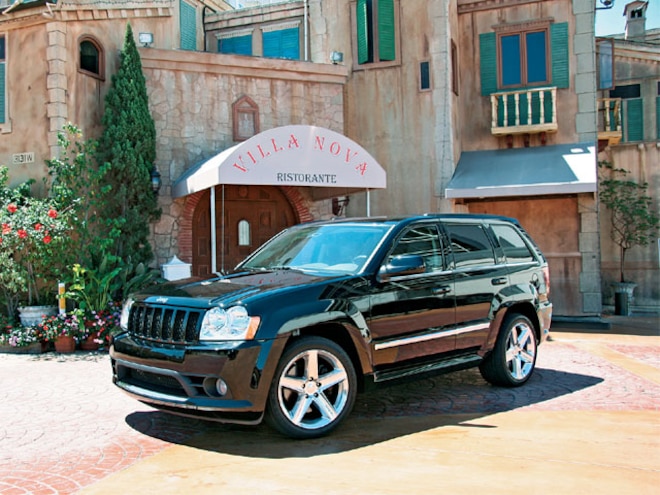 View Photo Gallery | 10 Photos
Photo 2/10   |   Special thanks go to Andy Crean at Villa Nova restaurant, in Newport Beach, California, for use of his facilities.
There's no question that the Porsche Cayenne Turbo is one badass SUV. With performance that rivals many dedicated sports cars, plus plenty of room for five adults and their luggage, it's one all-around formidable package. But, at more than $90,000, it's also unfortunately out of reach for the majority of us Average Joes out there. But, you're not completely SOL if you want an SUV with all the spice of the Cayenne turbo, for a price that doesn't give you heartburn. Introducing the latest thing in performance SUVs, the Grand Cherokee SRT8. Starting around $40,000, you can have an SUV packing a 6.1L high-output Hemi sportin' 420 eager ponies, all-wheel drive, and enough raw power to blow almost any SUV and most other cars into the weeds.
Ironically, the Jeep is less capable off-road than the Porsche. The SRT posse decided that rather than trying to create a do-everything vehicle and saddling the Grand with unnecessary weight and other compromises, they were going to make a purpose-built street-going SUV. As much as this riles the Jeep purists, it's hard to argue with the results. All told, the Grand still tips the scales to the tune of 4,788 pounds, but it's several hundred pounds lighter than the Porsche. 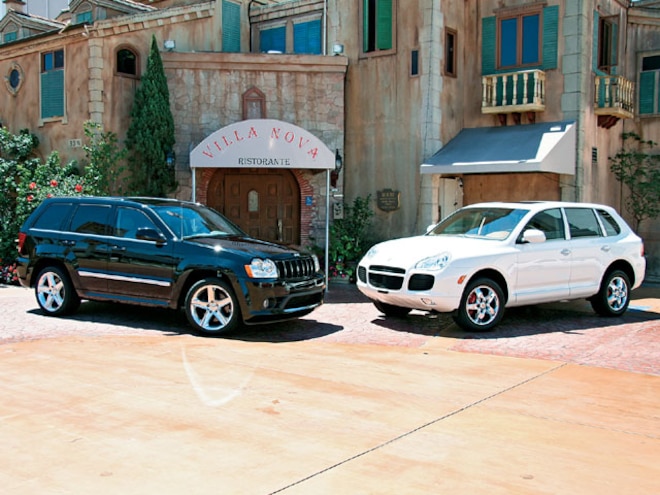 View Photo Gallery | 10 Photos
Photo 3/10   |   jeep Grand Cherokee Srt8 porsche Cayenne
Despite its weight, the SRT has a nimble feel that belies its packaging. Of course, 420 horsepower has a tendency to do that. The Grand also rides on a specially tuned street-oriented suspension on 20-inch wheels. Bringing the nearly 2-1/2 tons to a halt are substantial, ventilated Brembo four-pot discs at each corner. The combination of all these tweaks adds up to one hunkered-down, no-nonsense street SUV.
If the lowered stance, shiny dubs, low-profile rubber, and dual polished exhaust tips sticking out where the trailer hitch would usually be aren't enough to remind you the SRT's lair is the asphalt jungle, one hasty move down a steep driveway or over a parking curb will remind you, with a painful-sounding scrape of the air dam, which clears average parking barriers by fractions of an inch. But, once you're cruising, the commanding seating position, menacing burble of the high-output Hemi, and the instantaneous power make you feel nearly invincible. Want to get around a slowpoke? See a hole in traffic? Unlike other cars or trucks, where a certain amount of calculation and anticipation is required to take advantage of gaps in traffic, the Grand is truly a point-'n'-shoot tool. Signal and floor it...you're there. It's a good thing for those beefy Brembos, though. 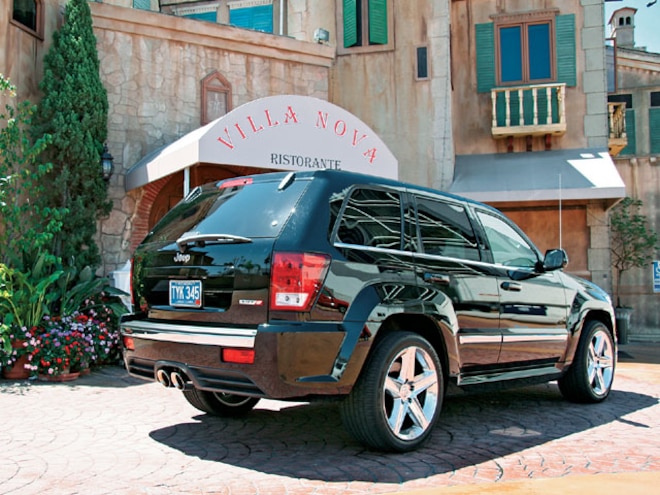 View Photo Gallery | 10 Photos
Photo 4/10   |   jeep Grand Cherokee Srt8 rear Passenger Side View
Although it can rival a Cayenne Turbo in the acceleration and handling departments, it's a bit of a stretch to say that the Grand SRT is a legitimate head-to-head competitor. The plasticky, stark interior can't come close to the Cayenne's elegant leather-lined cockpit. However, it's not that it's necessarily cheap-looking; it's just not in the same league as the Porsche. But, in terms of creature comforts, the Jeep can be fitted with plenty of bells and whistles. Our tester had a navigation system, Sirius satellite radio, driver-side memory seat, rear-seat DVD player, and a sunroof. So, if you're not a sucker for caressing a leather-trimmed dashboard, you may find the Jeep offers more than enough coddling. That said, the SRT's aggressively bolstered front buckets grip more than they coddle. The butt pocket and lower backrest are strategically upholstered with grip cloth, probably a wise move considering the vehicle's formidable performance potential.
The 6.1 Hemi may be powerful, but fuel-efficient it's not. Our combined average over a week of admittedly aggressive driving was 11.8 mpg, which is almost as good as the EPA-rated 12 mpg, but this is roughly in line with what we usually get with test vehicles. Rarely are we even able to replicate the EPA city numbers, much less the highway figure. The only problem is the Grand Cherokee's small fuel tank. Unlike a Suburban, which can cruise for a seeming eternity on its 40-gallon tank, the Grand has but a 20-1/2-gallon tank, barely bigger than even a four-cylinder Nissan Altima's. It seems no sooner had we filled up the tank with Premium and given the throttle a few enthusiastic jabs that we were back at the gas station, feeding our addiction to Hemi-powered speed.
The Final Word
A few issues ago, we reviewed the Chevy Trailblazer SS. It seems comparisons between the 'Blazer and the Jeep are inevitable. Although they're both midsize, musclecar-powered SUVs, the two have distinctly different flavors and missions. Whereas the SS has the highest towing capacity of the TrailBlazer line at 6,800 pounds, the SRT is the wimpiest Grand Cherokee when it comes to towing. It's built to handle a relatively feeble 3,500 pounds. Truth be told, the Chevy is probably a more practical all-around package. But, if you're simply looking for the fastest, kick-butt performance SUV out there for under $50,000, and you couldn't care less about its utilitarian benefits, the Grand Cherokee SRT8 is unequivocally it.
The 411
Year/make/model:
'06 Jeep Grand Cherokee SRT8
Base Price/as tested:
$39,300/$45,630
EPA Fuel Economy:
12 city/15 highway
Observed Fuel Economy:
11.8 mpg
Engine:
6.1L Hemi V-8
Horsepower:
420 horsepower at 6,000 rpm
Torque:
420 lb-ft torque at 4,800 r