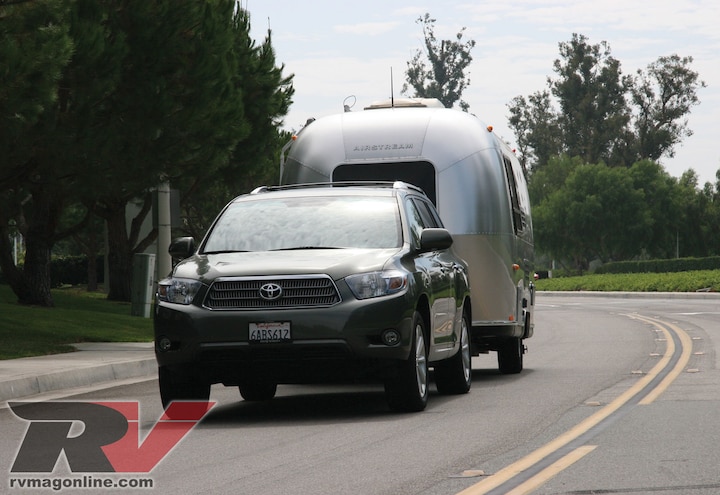 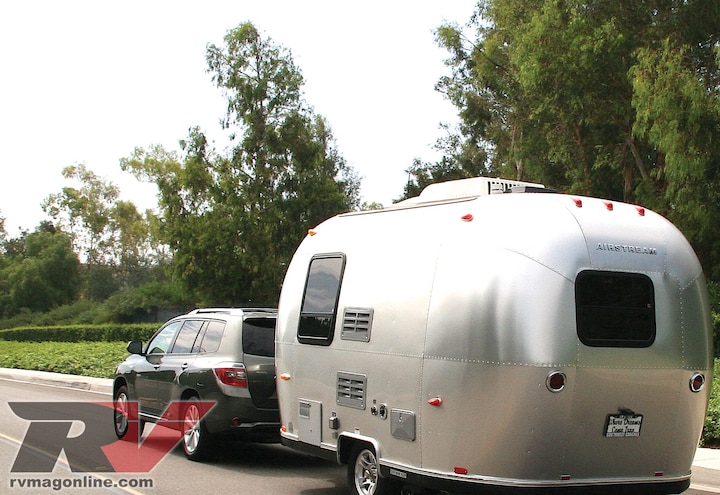 View Photo Gallery | 4 Photos
Photo 2/4   |   The Airstream trailer only weighed 2,800 pounds dry, but it looked menacing next to the Highlander.
Going green doesn't mean you have to swap your sneakers for Birkenstocks or give up that juicy steak for a salad. The facts are you can be green and enjoy the RV life because some hybrids are more than capable of becoming your double-duty tow vehicle.
What we like about today's crop of hybrid SUVs is that their cargo-carrying capacity seemed unchanged from the conventional platform. Hybrid batteries and electric motors appeared to be concealed enough to allow for ample room for the family and loads of gear. Small-, mid-, and full-size hybrid SUVs actually make excellent, comfortable runabouts for basic camping in the backcountry. The right hybrid can also tow that small trailer or popup whenever you want, or it can be your daily driver.
So whether you tow a hybrid SUV behind a Class A or use it to do the towing, today's hybrid is a technology worth exploring.
Things to Know
To understand a hybrid, it's best to educate yourself with the basics. For starters, there are two types of hybrids: full and mild. To distinguish one from another, you simply have to know whether the electronics complement just the starting and braking, or the drivetrain itself.

View Photo Gallery | 4 Photos
Photo 3/4   |   The overall feel was no better or worse than it would have been in any equivalent-size SUV, even though the trailer rose 2 feet above the Highlander's roof line.
Mild hybrids are in many ways standard vehicles with oversized starter motors. The electronics allow the engine to be turned off whenever the car is coasting, braking, or stopped. Mild hybrids restart quickly, and their accessories can function on electrical power while the engine is essentially off.
A full hybrid encompasses all the mild hybrid technology with the ability to drive the vehicle on battery power alone. Full hybrids are said to offer better fuel economy than mild hybrids; however, you'll have to deal with a cost/weight penalty.
We learned that the smaller Ford Escape, Mariner, and Saturn VUE can be flat-towed, but the Highlander Hybrid can't, due to the positioning of its electronic motors. That includes its front-drive sibling. It might be possible to dolly a front-drive Highlander, but it's best to check with the manufacturer before doing so.
While that's not all good news, the thing to remember is that most mild or full hybrid SUVs get the same or better mileage than conventional platforms, and they reduce the emissions we produce in sensitive wilderness areas thanks to their battery's ability to run on electric power alone or to assist the engine for short distances.
First Drive
From Toyota, the new midsize Highlander Hybrid Limited makes its case by offering a 3,400-pound tow capacity. For a midsize crossover, that's good news. With a cumulative 270 hp on tap from its 3.3L VVT-I V-6 in sync with the three separate electric motors, the second-generation Highlander Hybrid mates perfectly to today's smaller popups and family trailers. 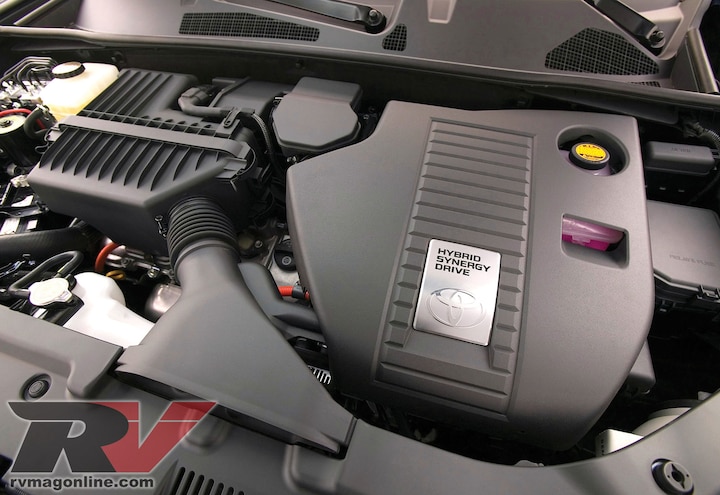 View Photo Gallery | 4 Photos
Photo 4/4   |   With a cumulative 270 hp on tap from its 3.3L VVT-I V-6 in sync with the three separate electric motors, the second-generation Highlander Hybrid mates perfectly to today's smaller popups and family trailers.
There's no denying that Highlander is a family SUV with ample legroom and enough seating to handle seven passengers with the third-row seating. The interior comforts were many, and ergonomically speaking we can't argue with Toyota's instrument design except to say that the knobs controlling the stereo system were bulbous.
Toyota Highlander's hybrid technology works something like this: Two electric motors expand their energy on propulsion and work as generators during braking. The other electric motor starts the gas engine and recharges the nickel metal hydride battery pack.
The entire process is nearly seamless, but we did hear some strange noises occasionally, primarily while moving slowly, and it took a while to get used to it. Sitting in my driveway the first time, I had trouble telling whether the engine was on or off. It's extremely quiet on startup because essentially the only thing running is a single electric motor until you accelerate.
Can It Tow?
After hitching up to one of Airstream's single-axle trailers, we didn't know what to expect. We knew it could easily take a popup anywhere we wanted to travel. But what about something larger, taller, more ominous?
The Airstream trailer only weighed 2,800 pounds dry, but it looked menacing next to the Highlander, and we had to ask the guy from Southwest Coaches twice if we were doing the right thing. He nodded and said we still had capacity remaining before reaching the Highlander's threshold. Double-checking the owner's manual reassured us that we hadn't reached its limit, and so we shoved off for a quick spin.
Now it's not the way we typically do things, but we needed to see if Highlander squirmed with something larger than a tent in tow. In a seat-of-the-pants drive, the Highlander didn't flinch at the size or scope of the situation. The overall feel was no better or worse than it would have been in any equivalent-size SUV, even though the trailer rose 2 feet above the Highlander's roof line.
Unfortunately, time didn't allow for us to travel fully loaded, but it's safe to surmise that if we loaded the Airstream properly, the Highlander Hybrid would have performed on par with others in the midsize class. While we can give the Highlander Hybrid passing grades on our first drive with and without a trailer in tow, the $48,602 sticker (as tested) was a bit alarming.
The real attraction to the Highlander is its ability to get as EPA estimated 27 mpg city and 25 mpg highway under normal conditions while assisted by the electric motors. In times of ridiculous fuel costs, even if we only got close to the declared EPA mileage, we'd be moving forward and not two steps back.
SPECIFICATIONS
Year: 2008
Model: Highlander Hybrid Limited
Hybrid Net Horsepower: 270
(201 kw)
Engine Type: V-6 aluminum block and heads DOHC 24-valve
Displacement: 3.3L
Transmission Type: Electronically
controlled, continuously variable with planetary gear unit for gear reduction and power splitting. Electronic all-wheel-drive control system.
Recommended Fuel: 87 octane
Wheelbase (in): 109.8
Ground Clearance (in): 7.3
Seating: 7
Tow Capacity (lb): 3,500
Suspension: Front MacPherson strut,
coil springs; Rear dual-link MacPherson strut, coil springs
Brakes: Electronically controlled with ABS. Front vented disc/12.9 in. Rear solid disc/12.2 in.
GVWR (lb): 6,000
EPA Cargo Volume (cu. ft.): 94.1