Baby Titan Notches Another Year On Its Belt 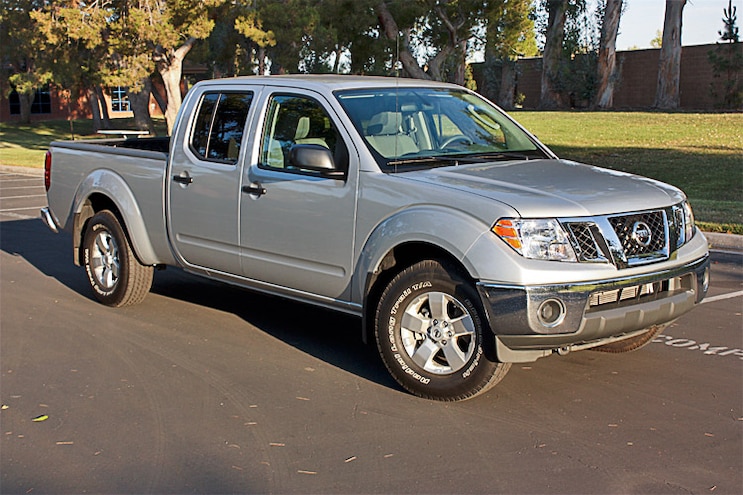 The lease on your bachelor pad is coming to an end. Naturally, the collection of hand-me-down and Scandinavian retail chain furniture occupying your personal quarters needs a way to get across town, because the found-on-Craigslist project car you've been driving is a mediocre moving option at best.
View Photo Gallery | 9 Photos
Photo 2/9   |   2010 Nissan Frontier Crew Cab Rear Three Quarters
Who you gonna call? Odds are it won't be that motley, jumpsuit-clad crew with a penchant for the paranormal. You want someone with a six-foot-long bed that isn't meant for sleeping. Someone with a vehicle designed to swallow a myriad of weighty objects. You want someone with a pickup truck, and hopefully the particular family member/friend/casual acquaintance you've cajoled into being your accomplice for the weekend will have the keys to something like the 2010 Nissan Frontier.
The midsize Frontier continues to stay true to the prototypical truck mold. It's underpinned by a fully boxed, steel ladder frame -- architecture shared with its younger, full-size Titan relation. Its live rear axle is supported by a leaf spring suspension, and the independent front puts two double A-arms to work. Our crew cab Frontier tester also came equipped with Nissan's shift-on-the-fly four-wheel drive system. Translation: A two-speed transfer case. Add to that 31-inch-tall, trail-ready BFGoodrich tires and a generous ground clearance, and you can be assured the weekend move won't be hampered by big rocks and loose terrain. Or a steep, slippery driveway.
View Photo Gallery | 9 Photos
Photo 3/9   |   2010 Nissan Frontier Crew Cab Front Three Quarters
You may find the ride quality to be a bit hard and loud on the way to your new place of residence, attributes surely magnified as you sit weary in your cloth-covered seat. The road noise can be sourced to the tires' blocky tread patterns, but the jarring ride is worth it for the 1250 pounds in payload capacity. There's plenty of bed space -- 33.5 cubic feet, to be exact -- and the box is treated to factory-applied spray-on bedliner and Nissan's Utili-Track channel system with four sliding tie-down cleats, both standard fare for crew cabs. If you were wondering how that comprehensive home gym you ordered to fulfill a New Year's resolution was going to make the trip, speculate no more.
A barebones interior devoid of frivolities is historically a pickup truck hallmark, and the Frontier doesn't stray. The cab's layout and overall scheme are simple and neutrally colored. There's no navigation option, but the air conditioning and two 12-volt DC power outlets are factory stock. A quick examination of the installed $1000 SE Value Truck Package reveals the bundled basics: power windows, power door locks, power mirrors, cruise control, and a vehicle security system. A sliding bed divider, tow hitch receiver (actual hitch sold separately), cabin microfilter, and floor mats are also included in the cost.
View Photo Gallery | 9 Photos
Photo 7/9   |   2010 Nissan Frontier Crew Cab Hp
With cargo loaded and the Frontier en route, the 4.0-liter V-6 has a chance to shine. The segment-leading six-cylinder puts out 261 horsepower and 281 pound-feet of torque, delivering reliable performance with little bravado. The five-speed automatic transmission, however, proves disappointing. It's too eager to run through the gears, whether the truck is laden or not. When you're facing an incline and vigilantly monitoring the status of your possessions in the open bed, you don't want to be greeted with a drop out of the engine's powerband. The overdrive button will see bountiful use and hill start assist and hill descent control helps with dead-stop scenarios.
View Photo Gallery | 9 Photos
Photo 8/9   |   2010 Nissan Frontier Crew Cab Engine
You've reached your final destination, unloaded, and it's time to pay the gas bill. The Environmental Protection Agency rates this particular Frontier at 14 city and 19 highway mpg, but you'll likely experience in the vicinity of the 15.4 mpg we recorded over 580 miles. The act of changing domiciles is rarely an enjoyable occurrence, but one thing's for sure: With a generous payload and 6100-pound towing capacity, plus a worry-free attitude, the Frontier can handle a lot of moving.
View Photo Gallery | 9 Photos
Photo 9/9   |   2010 Nissan Frontier Crew Cab Rear Seats