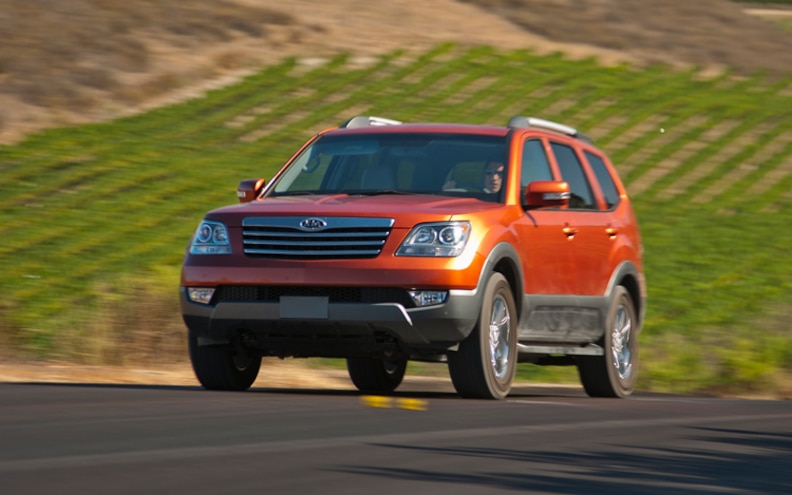 When Kia initially developed the body-on-frame Borrego, it would have made perfect sense to see it in a comparison with the Ford Explorer, Jeep Commander, and Dodge Durango, as they all were three-row, truck-based sport/utilities. But by the time the Borrego entered production in 2008 as a 2009 model, crossovers were starting to take over the SUV market, and the Borrego was too late to the party. In fact, the Explorer and Durango are now crossovers, and the Commander and Borrego have been discontinued as the market shifts away from body-on-frame SUVs.
View Photo Gallery | 12 Photos
Photo 2/12   |   2009 Kia Borrego EX Front Three Quarter 2
We were impressed that Kia was dabbling in the truck-based vehicle arena, and spent more than a year testing every aspect of what the Borrego was built to do: provide transportation on-road for seven people; carry gear in a flexible, reconfigurable cabin; drive off-road; and tow.
Part of the reason crossovers have become so popular is their refinement, often in the form of a cushy ride, sporty handling, comfortable interior, and slick car engines. One of the Borrego's disadvantages in the changing automotive market is that it had all the capability, but lacked polish and refinement. On a trip to San Diego, one editor noted that the Borrego's chassis feels trucklike and that its 337-horse, 4.6-liter V-8 engine is coarse. Ride quality also feels rough and trucky, and the Kia developed an odd groan in front and a squeak in back. The overall driving experience isn't all that memorable, either. As assistant Web producer Scott Evans explained, "The Borrego is a perfectly capable but utterly unremarkable vehicle. It went 1000 miles with nary a hiccup and was a pleasant long-haul cruiser. The engine has good power and the SUV handles surprisingly well for its size. Every time I walked away from it, though, I completely forgot about the drive because it was entirely uninteresting."
View Photo Gallery | 12 Photos
Photo 3/12   |   2009 Kia Borrego EX Rear Three Quarters 2
Making things worse, the Borrego was not as nice as the truck-based Explorer and Tahoe, let alone the crossovers. But it did have positive attributes. The navigation system and multimedia interface got very high marks from the staff, not only for ease of use, but because the nav allows the front passenger to enter addresses while the vehicle is in motion. The Borrego's tight turning radius and great acceleration also earned praise, but its V-8 power came at a price: so-so fuel economy with a test average of 16.9 mpg.
View Photo Gallery | 12 Photos
Photo 4/12   |   2009 Kia Borrego EX Side
How fast was it? At the track, it reached 60 mph in 7.2 seconds, not too shabby for a 4876-pound four-wheel-drive sport/utility. Passing power also impressed; acceleration from 45 to 65 took only 3.4 seconds. It got through the quarter mile in 15.5 seconds at 91.0 mph. It stopped from 60 mph in 125 feet.
View Photo Gallery | 12 Photos
Photo 8/12   |   2009 Kia Borrego EX Cockpit
The Kia went to the dealership four times for regular service. At 9169 miles, it got its belated 7500-mile service: an oil change, inspection, and tire rotation ($168.22). Running slightly less late for its 15,000-mile service, which cost $451.61, it received the same service as it did before, plus the rear differential fluid was replaced. The 22,500-mile service repeated the 7500-mile service ($56.94) as did its 30,000-mile service, but that last trip also included differential and transmission fluids, in addition to replacing the cabin and engine air filters ($664.21).
The Borrego was a reliable workhorse, serving as transport for a backpacking trip and a weekend of rock-climbing. It was frequently used by photographers Brian Vance and Julia LaPalme for shoots, especially those that involved off-roading. It was an excellent vehicle for prerunning trails, manuevering easily in dirt and over rocks while carrying a cargo area full of gear.
View Photo Gallery | 12 Photos
Photo 9/12   |   2009 Kia Borrego EX Engine
During the year-plus with the Borrego, we watched as crossovers began their domination of the SUV market, and what started as a hiatus for the Kia truck became permanent. It's probable that sales would have been better for this SUV had it come to market sooner, but the Borrego will be a great used-car value for people who want this level of capability.
At the end of our time with the Borrego, associate Web editor Kirill Ougarov summed up: "I'm impressed with how well the Borrego has held up. It has led a fairly hard life in the past year, and despite the high mileage on the clock, everything still works as intended. The design of the interior, however, has not aged well at all. The Borrego's behind-the-times design has really begun to stand out. It deserves an update."
View Photo Gallery | 12 Photos
Photo 10/12   |   2009 Kia Borrego EX Front End In Motion
We know how much Kia improves its vehicles over generations. It's sad to think that the Borrego will never benefit from changes that could have made all the difference.
From the logbook
View Photo Gallery | 12 Photos
Photo 11/12   |   2009 Kia Borrego EX Side 2
"The Borrego's size came in handy: It comfortably seats four adults and plenty of luggage without any rear-visibility issues. Still, though, with that bumpy ride, I don't think I could recommend the Borrego unless you need to use the V-8 to tow up to 7500 pounds."
Zach Gale
"Maybe I spend too much time in cars, but the ride is rather uncomfortable. No bump, pothole, undulation, or texture goes untransmitted through the steering wheel, seats, and cabin. Twice, bumps on the 101 actually made the steering jump."
Carlos Lago
"High marks for the Borrego's turning radius. Every time I had to make a tight turn in a parking lot, the Kia impressed me. It's much more maneuverable than you would expect of a vehicle its size."
Scott Evans
View Photo Gallery | 12 Photos
Photo 12/12   |   2009 Kia Borrego EX Front End
"Have others noticed that the Borrego's V-8 is getting stronger as it gets more miles on it? The engine feels more powerful to me than it did when we first got it."
Brian Vance