They Mean Business: Nissan Takes on E-Series and Express 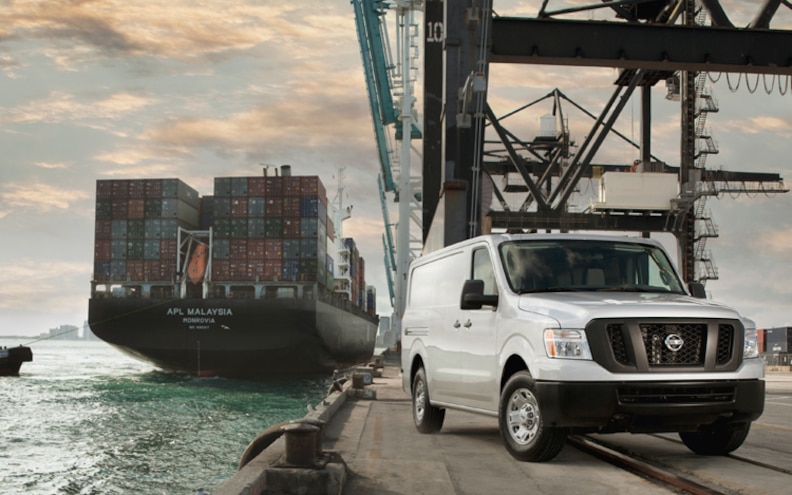 What would you do with 323 cubic feet of space on wheels? (I'd swear my first apartment was smaller than that.) Nissan hopes there are plenty of small-fleet owners -- companies with less than 15 vehicles -- and individual buyers who are interested in this huge amount of space, available in the new NV line of vans. The company has done extensive research on the van market, and learned that owners in this segment are the least satisfied with their vehicles. Nissan saw this as a huge opportunity. After all, there's the rugged Titan platform; put a van body on there, and -- presto, change-o -- you have a van, right?
View Photo Gallery | 19 Photos
Photo 2/19   |   2012 Nissan NV2500 HD Front Three Quarters View With Side Door Opened
Not quite. By the time the engineers were done, the only things the NV line of vans shared with the Titan were an engine, transmission, and a similar-looking snout. The vans will be sold as the NV1500 (standard roof only), NV2500 HD, and NV3500 HD. The biggest difference between the 2500 HD and 3500 HD is that the tires are different, and the 3500 gets heavier-duty springs. All three will be available in S or topline SV trims, and the 2500 and 3500 HDs are offered with a standard roof or high roof. Power comes from either a 4.0-liter, 261-horsepower V-6 or the Titan's 317-horse, 5.6-liter V-8, both backed by a five-speed automatic. The V-6 is standard with the 1500, and the standard and high-roof 2500. It is a surprise that the Titan isn't available with a diesel at launch, but it's an option the company is considering for the future.
View Photo Gallery | 19 Photos
Photo 3/19   |   2012 Nissan NV2500 HD Front Three Quarters View
We briefly drove a pre-production 2500 HD high-roof with the V-8. This combination is expected to be the volume seller. There will be side and rear glass packages and a 12-passenger version coming in about a year, but our pre-production tester had no glass behind the B-pillar. Despite limited visibility due to the lack of glass, maneuvering though traffic is fairly painless. The side mirrors are very helpful, and come with a fisheye-type lower third. There are also optional towing mirrors, for those who want a wider view. While the V-8 feels almost like overkill in the Titan, in this van, the power is just about perfect.
View Photo Gallery | 19 Photos
Photo 4/19   |   2012 Nissan NV2500 HD Rear View
Acceleration is excellent, even when carrying a payload. Linear and responsive braking provides confidence. The body-on-frame van's ride is firm, but smooths out when there's a load in back -- as it should be in any vehicle designed to do hard work. And this body-on-frame van falls in that category: Aside from the aforementioned maximum cargo volume, the NV's maximum payload capacity is 3925 pounds, and it can tow up to 9500 pounds. It's longer than the comparable Sprinter, but the standard roof height is similar to that of the E-Series.
There's a lot of room up front, thanks to the pickup-like nose. That pushes the engine forward, out of the passenger area. The downside? Not everyone is going to like the styling. There are some cool features in the cabin, such as the passenger seat that can fold flat and serve as a work area. There are also a lot of storage cubbies throughout, including several above the sun visors, like you would see in an RV. There are impressive creature comforts available, including nav, satellite radio, aux jack, and rear camera, plus the NV has VCD and traction control standard, and it starts at $25,570, the lowest price in its class. With that, you get either graphics or a base shelf and rack unit for no extra charge. The NV lineup goes on sale in March at about 300 Nissan dealerships. Those dealerships have been retooled with larger bays and new "Nissan Commercial Vehicles" signs.