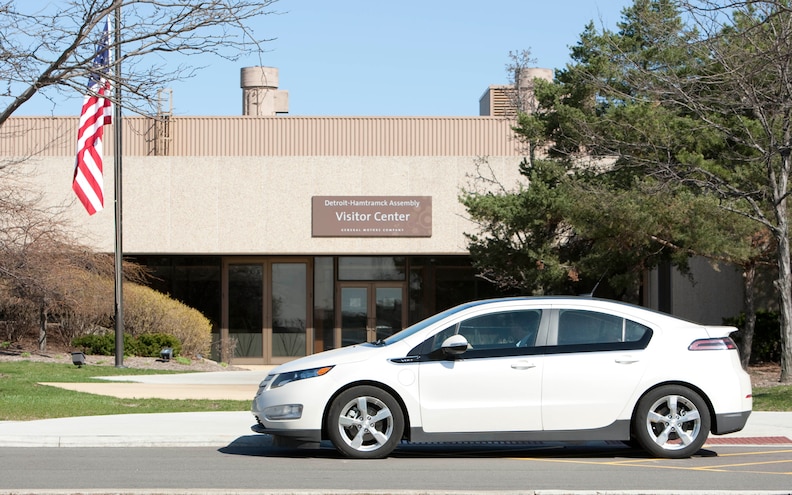 After being tied up in paperwork for several weeks, our long-term 2011 Chevrolet Volt has finally returned from the repair shop following a rear-end collision that resulted in a scuffed bumper and broken back-up light. That's the good news. The bad is that we managed to lightly burn the wall plug on the portable Level 1 (120-volt) emergency/opportunity charger that usually resides in a coil in the trunk.
View Photo Gallery | 11 Photos
Photo 2/11   |   2011 Chevrolet Volt Front Three Quarter In Motion
Burned the plug? Burned the plug! I can see the legal eagles at GM and the NHTSA abuzz right now, but relax everybody. The damage was very slight and, most importantly, entirely our fault. Nearly every day it's at our office, the Volt is electrically replenished by our Level 2 (208-volt) Aerovironment charger in a quick 3.5 hours. However, we sometimes charge it at our homes at night, too (yes, this is a flip from most owners work/home-charging ritual, but it works out the same). That means 120-volt wall plugs, and our trouble came from trying to quantify these home chargings because they are, of course, energy put into the Volt, just like gas.
There are a variety of home electrical energy meters on the market and -- without naming names -- we've now overheated and burned the receptacles of two of them. Two? My fault. The damage crept up on us over time. I almost didn't believe it the first time after mistakenly not inspecting the plugs until the damage was done. In fairness, an electrical device that continuously draws 8 to 12 amps for 10 straight hours is unusual punishment for a gizmo intended for TVs and toasters. But if you're a maker of a durable 120-volt energy meter, I'd like to hear from you.
View Photo Gallery | 11 Photos
Photo 3/11   |   2011 Chevrolet Volt Front Trhee Quarters
Quite frankly, if the Volt were my own car, I'd probably just clean the plug's prongs. But it's not. And as the Volt's a member of the MT test fleet we're honor-bound to keep it in tip-top condition -- including its little plugs. Unfortunately, the price of that good intention was an eye-popping $475 for a replacement unit (since we caused the damage, it wasn't under warranty).
View Photo Gallery | 11 Photos
Photo 4/11   |   2011 Chevrolet Volt Front End
And what are the results from all these plug-singing home rechargings? Soon after the Volt was placed in our hands we began to keep meticulous records of its behavior: every time the car has been charged including duration of charge, kW-hrs used, predicted range, actual range, and on and on. The results? I'm going to coyly make this a cliff-hanger until next month (there are still lots of numbers to crunch!) but here are a few conclusions that don't need careful analysis. One is that, with over 16,000 miles on the clock, the Volt's EV range is still regularly over 35 miles (I recently saw 45) and shows no sign of dropping. Another is that in range-extended mode (battery is kaput), its gas mileage is good (in the high 30s) but underwhelming compared to the class-topping (and notably cheaper) Prius. Got you worked-up with anticipation? Ah, you'll have to check-in next time for all the gory details.
View Photo Gallery | 11 Photos
Photo 5/11   |   2011 Chevrolet Volt Across America Side 3