Power Trip: Two type-a archrivals crank it up in a megawatt battle to rule the new musclecar generation

Ezra Scattergood knew a thing or two about high voltage. Known as Los Angeles's "father of power," Scattergood led L.A.'s Department of Water and Power for 31 years, growing it from a one-employee institute into the largest municipal utility of its kind. Under Scattergood's reign, the City of Angels exploded into one of the most influential and vital metropolitan areas in the world. As Cosmopolitan magazine wrote in 1947, "Probably nobody has contributed more to the creation of this phenomenal Western metropolis than Ezra Frederick Scattergood." Knowledge may be power, but knowledge of power can be just as, um, powerful.
Seeing we possess an endless knowledge of power--horsepower, that is--we thought it only fitting to bring the burly, all-new Dodge Charger SRT8 and its archrival, the Pontiac GTO, together for a rendezvous of force at nearby Scattergood Generating Station in Playa Del Rey. For four decades, these two nemeses have not only been giving the automotive world lessons in power, they've also been duking it out, toe to toe, with many a face-off going down right in Scattergood's backyard of SoCal. Consider our little soiree an homage to good ol' Ezra.
The rules were simple and the stakes high: Bring your most potent ponycar to the party, leave all excuses at the door, and fight for the right to be crowned king musclecar. The General versus the Goat in the ring at Scattergood's house. Let the power trip begin... 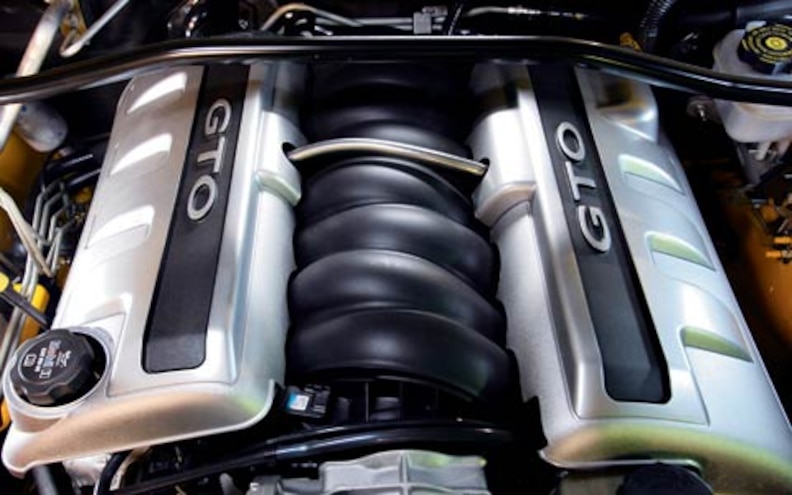 View Photo Gallery | 13 Photos
Photo 2/13   |   Pontiac GTO V-8
Although the Charger SRT8 is the fresh face in this fight, we've seen its formula before. Under its four-door "coupe" styling, replete with flying-buttress C-pillars echoing its 1960s ancestors, the new Charger is for all intents and purposes a Chrysler 300 SRT8, sharing its platform, powertrain, chassis, and numerous dimensions. But while the two appear nearly identical in size, the Charger's bodywork has been pumped to add 3.3 inches of length, 0.4 inch more width, and 0.3 inch extra height. 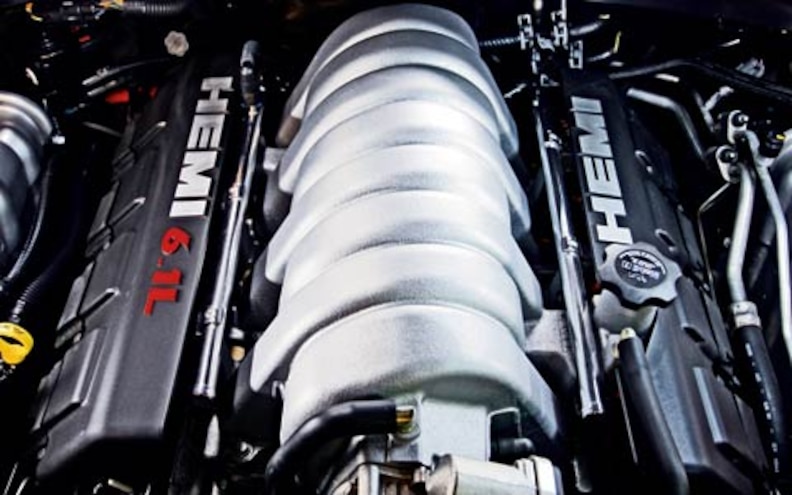 View Photo Gallery | 13 Photos
Photo 3/13   |   Dodge Charger SRT8 V-8
That the musclecar maniacs in DaimlerChrysler's Street and Racing Technology (SRT) group subjected the Charger to essentially the same rigorous workout as the 300C SRT8 means the testosterone-infused Dodge leaves the gym emphatically ripped compared with its softer, 5.7-liter sibling. Accordingly, it packs a 6.1-liter, 425-horsepower Hemi V-8; a heavy-duty five-speed AutoStick teamed with upgraded axles and differential; SRT-tuned dampers, springs, bushings, and anti-roll bars; a half-inch-lower ride height; and four-piston Brembo brakes peeking through 20-inch forged wheels wrapped in Goodyear summer tires. Appropriately, the Charger gets a more menacing face that features an integrated hood scoop, a body-color cross-hair grille, and a deeper air dam with brake ducts the size of cantaloupes. See a Charger SRT8 loom large in your rearview mirror, and it looks like you're about to be run down by an angry, hungry lion.
Speaking of animals, how about the Charger's bait in this shootout, the Goat? Now in its third year, the GTO enters 2006 with just one significant change--available 18-inch wheels. Unfortunately, the timing of our test dictated that Pontiac could only lend us a 2005 for evaluation. Nonetheless, we forged ahead with the not-as-fresh Goat, especially since it still boasted the necessary attributes to meet the Charger head on: a 6.0-liter, 400-horsepower LS2 V-8 pulled from the C6 Corvette; an optional Tremec six-speed manual transmission; four-wheel independent suspension; a limited-slip differential; and variable-ratio power steering. This Goat can go, but is it quick enough to beat the Charger?
Objectively, yes. The GTO outgunned the SRT8 from 0 to 60 (4.7 seconds versus 5.0), 0 to 100 (11.7 versus 11.9), and in the quarter mile (13.3 seconds at 105.9 mph versus 13.5 at 106.3). Chalk it up to a better weight-to-power ratio (9.4 pounds/horsepower versus 10.0) and, at least for the 0-to-60 blast, the advantage of launching with a manual transmission. Subjectively, however, the advantage didn't register on the seat-of-the-pants meter, a sensation backed up by the closeness of the numbers. If anything, driving the two back to back leaves the impression that the Charger is the friskier beast, its Mercedes-sourced five-speed automatic unleashing the Hemi's 425 ponies so fluidly that stomping the throttle delivers a seamless rush of acceleration that could easily double as mental therapy. Moreover, the Charger emits an intoxicating, raspy rumble befitting its size and strength, while the GTO sounds friendlier, as if comparing a Rottweiler's growl to a bloodhound's. Perhaps it's the GTO's way of signaling that it has a tighter rein on its 400 horses, due in large part to the balky, long-throw Tremec shifter that makes harnessing all that horsepower a chore. Like an omelet pan, the six-speed needs to get intimate with Teflon.

View Photo Gallery | 13 Photos
Photo 4/13   |   Pontiac GTO
Hustled through a long stretch of twisty roads, the GTO is arguably more fun, but it's the Charger that's more impressive. The GTO, at 189.8 inches and 3777 pounds, feels small, agile, and tossable compared with the 200.1-inch, 4266-pound SRT8. The GTO initially understeers mildly before gradually switching to mid-turn oversteer, at which point the driving experience becomes an entertaining throttle-and-steer shuffle, the Goat dancing and sliding through sweepers in concert with inputs from your right foot and hands. It's less precise than the Charger, rolling more, feeling less integrated and a bit sloppier, a sensation not helped by the mud-and-snow tires that left it trailing the big Dodge in 60-to-0 braking (138 feet versus 124), on the skidpad (0.83 g versus 0.87), and through the figure eight (26.8 seconds versus 26.3). The Charger exhibits more understeer than the tail-happy GTO, but its mammoth Goodyears provide enough grip to allow the chassis to promptly convert the understeer into neutral behavior that can safely be stimulated with the throttle. The steering is light and precise, the brakes tenacious and fade-free, and the chassis well-

View Photo Gallery | 13 Photos
Photo 5/13   |   Dodge Charger SRT8
conceived, like the front and rear ends reside on the same page. If there's a nit to pick with the SRT8, it's the unyielding ride that can bounce your booty over bumpy roads, as if you were trudging along on horseback. Conversely, the Goat coddles its occupants with a much more compliant ride--one of the few benefits to hoofing it with 17-inch wheels.
Before we can give you the bottom line, let's first examine the bottom line. The Charger SRT8, at $38,095 to start, is considerably pricier than the $33,690 GTO, but the premium isn't unwarranted, considering it comes with stability control, side airbags, Brembo brakes, and forged wheels with summer tires, not to mention a roomier cabin for five. And keep in mind that the Charger is slapped with a $2100 gas-guzzler tax, which the GTO is burdened with only when equipped with the standard automatic, although for the Pontiac, the tax is a less-invasive $1300. Furthermore, the Dodge's tasteful interior, which can be outfitted with features unavailable in the GTO--e.g., a navigation system, adjustable pedals, curtain airbags, a sunroof, and a rear-seat video system--feels fittingly modern, stuffed with the kind of accoutrements that buyers want. The Goat, evidenced by its obvious lack of options, not to mention standard features, comes across as somewhat dated in the Charger's company.
In the end, "out of place" is how we viewed the GTO in context with the Charger. While quicker than the Dodge, the Pontiac felt less refined, less civilized, and less inviting than the Charger. Given the option to drive one, whether on a short stint or a long haul, the Charger is the obvious choice--the best musclecar for the job. Not only does it look the part--no other V-8-powered American sedan appears as ominous--but it plays the part with an involving driving experience, be it sensationally, aesthetically, or acoustically. That's a powerful argument--one we're sure Ezra Scattergood would appreciate.

View Photo Gallery | 13 Photos
Photo 13/13   |   Dodge Charger SRT8 Overhead Passenger Side View
The Musclecar Is Back!
And it's here to stay
By Angus Mackenzie

Don't believe for a moment the rekindling of America's love affair with powerful rear-drive V-8 sedans and coupes is a flash in the pan. This stuff is visceral, deeply ingrained in the psyche of the American driver: The explosion in pickup-truck sales during the 1980s and 1990s was probably driven less by the need to haul stuff than a desire to recapture the fundamental spirit of the American automobile, lost when Detroit switched wholesale to producing ho-hum, appliance-like front-drive cars powered by asthmatic V-6s. Trucks are rear-drive, mostly have V-8s, and don't look like jellybeans. Or Camrys.

Curiously, it's the Australians and the Germans who've kept alive the spirit of the American musclecar. Both countries have shown musclecars can survive high gas prices (they pay $4 to $6 a gallon) and steep insurance costs. In Australia, where GM, Ford, and Chrysler all made bijou versions of American musclecars in the late 1960s and early 1970s, GM's Holden subsidiary has built V-8-performance versions of its best-selling Commodore for 25 years.
Mercedes-Benz (with a little help from Porsche) shoehorned a 5.0-liter V-8 under the hood of a W124 E-Class in the early 1990s to create the 500E, a musclecar so subtle that only the slightly pumped front fenders, lower ride height, and16-inch alloy wheels gave you a clue that this somewhat staid-looking sedan could nail 60 mph in under six seconds. Now Mercedes is Europe's musclecar king, offering AMG-tuned versions of almost every model it makes, some with more than 600 horsepower.
Now both Australia and Germany are helping Detroit build musclecars again. Okay, the current GTO (a Holden with Pontiac makeup) hasn't sold in the numbers GM expected, but that's largely because the Aussie car's restrained styling didn't match U.S. consumers' expectations of what a 21st-century Goat should look like. That problem should be solved with the 2008 GTO, which will share its underpinnings and powertrain with the next-generation Commodore, but clothed in much more aggressive, uniquely styled sheetmetal for America.
Chrysler's rear-drive LX platform was developed using a lot of hardware and know-how from the W210 E-Class, and the SRT versions of the Chrysler 300C, Dodge Magnum, and Dodge Charger are eerily similar in concept and execution to the AMG-badged Benzes. Chrysler will present a concept coupe built on a shortened LX platform at the next Detroit show. The car will carry an iconic name, Dodge Challenger, and our sources say the production version will be the first Chrysler to come off the new LY platform as a 2010 model. And, yes, it'll be rear drive. With a V-8.

|   2nd Place: Pontiac GTOThe Goat's still got strong legs, but it's beginning to show its age.