How to survive a comparative odyssey? Pure grit

Our 2006 Kia Sedona arrived at MT's door having big, H-logoed shoes to fill. With the recently departed and well-regarded 2005 Honda Odyssey still fresh in the minds of our staffers, new-guy Sedona suffered early on from numerous comparisons: "It walks like an Odyssey, it talks like an Odyssey, but it doesn't exactly taste like an Odyssey." "Offers all the function to those who don't want any driving fun. And the 'fun' I'm talking about is the type that can be had in an Odyssey." "The tranny isn't as refined, the engine isn't as smooth, powerful, or quiet. The Sedona has more body creak than the Honda, and I've noticed the creaking is becoming more pronounced as the miles pour on." 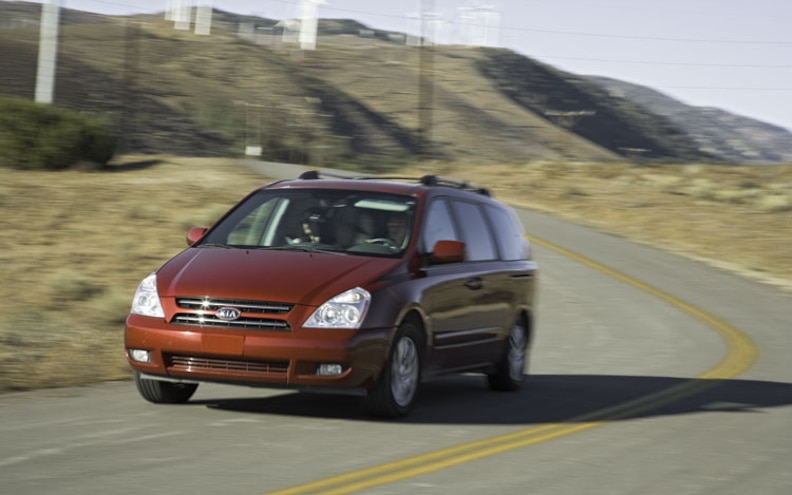 View Photo Gallery | 5 Photos
Photo 2/5   |   2006 Kia Sedona front View
So if the Honda was clearly more charismatic, how then did the Sedona manage to clock 32,135 total miles (over 6000 more than the Odyssey) and eventually win over the staff? Chalk it up to pure grit.
Like the Odyssey, the Sedona rarely spent a night in our garage. During the week, it was called to action as a photo-support vehicle, often filled to capacity with coolers, reflectors, and bags of camera gear and rigging. And each trip was a proverbial "hell and back" excursion: "The Sedona works perfectly as a photo vehicle," writes photographer Brian Vance. "It allows me to lie flat on the floor and shoot car-to-car out the side doors. Though the lack of an available nav system and a dash auxiliary audio input put a cramp on long trips to unknown places."
Our other shooter and frequent Sedona pilot, Julia LaPalme, singles out the performance as the key to overcoming soccer-mom syndrome: "The acceleration proved to be enough to give it a fighting chance in cutthroat Los Angeles traffic, making it a sleeper of sorts. Passing nimbler sedans or meaner-looking SUVs made driving a minivan easier on the ego."
On weekends, it was the family-hauling road-tripper of choice. Logbook comments laud the Sedona for its "right-size" flexibility and convenience. Nods of approval also went to its steady and reliable powertrain, which pulled eagerly whether the car was empty or loaded for five long days of Car of the Year testing.
With such heavy use, issues surfaced triggering further comparison: "Kia seems to use chintzier plastics and lower-grade leather in the interior than the Honda, and, as time goes on, those plastics and leather have become glossier and more worn than the Odyssey's interior over a similar period." 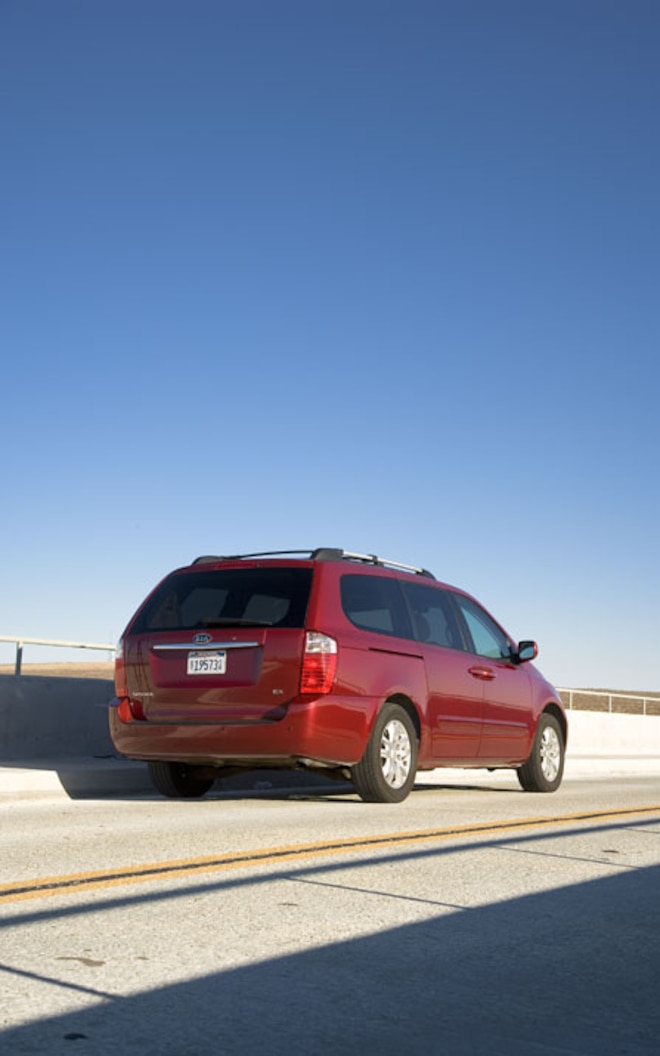 View Photo Gallery | 5 Photos
Photo 3/5   |   2006 Kia Sedona rear View
More frustrating was the finicky folding second-row seats. "It can certainly tote a whole mess of gear," says LaPalme. "But those middleseats are less than user-friendly during removal and installation. Each seat needs to slide to just the right point on its rails before it'll flip forward, at which point the cumbersome unit could be removed. Reinstallation is no easier."
Over time, the seats became such a problem it seemed no combination of foul oaths or brute strength could remove them, though it should be noted that, even with the second-row seats immobile and folded forward, the Sedona swallowed an impressive amount of goods, as this editor learned when moving to a new house.
And the Sedona did score some points of its own. Unlike with the Odyssey, we had no serious issue with our power sliding doors sticking open, though slight grades would overcome the door motors, sometimes causing them to reverse course quickly and a bit dangerously. Our heavy-lifting photographers usually switched the entire system to manual, commenting that the doors and rear gate were light and easy to open and close.
Overall, the Sedona's cost of upkeep was reasonable in view of the mileage accrued. Average fuel economy was 17.9 mph for the life of the car and frequently noted as impressive on long road trips, considering the demanding speed, terrain, and quantity of passengers and gear. Our Odyssey recorded 18.3 mpg during its 25,905-mile tenure. Regular maintenance costs offset each other, ranging from downright cheap at $19.50 for the 7500-mile oil-and-filter change to an eyebrow-raising $223.27 for the 15,000-mile job that included a battery and fluid check, tire rotation, brake adjustment, and wiper replacement. The $504.71 hit our wallet took at 30,000 miles furrowed our brow even further before we realized that few if any of our long-termers log so many miles.
By the end of its 15 months with us, the Sedona was one of the family-the Honda just an old friend we fondly remembered but spoke of less often. Sure, the Sedona didn't have all the bells and whistles of old what's-his-name, though we were able to accept that given its much lower initial cost and the many miles of reliable service it returned.

View Photo Gallery | 5 Photos
Photo 4/5   |   2006 Kia Sedona interior
FROM THE LOGBOOK
"Put 1000 miles on the Kia with a trip to San Francisco to bring college student back to campus. Flexibility of third row and flip-and-fold tech was invaluable. Impressed with 21.5 mpg over the trip -- up and down mountains and hills in Santa Cruz and then buzzing the steep slopes of Nob Hill."
- Mark Williams
Over the holiday season, I logged 1479 miles in the Sedona and found it wonderful. From sea level to 9200 feet, from dry to rain, from sun to snow, lots of cruising at 80 mph with five people, luggage, and foul weather. Yet the Kia kicked back over 20 mpg. On the trip back, there were severe winds with gusts above 70 mph, but the Sedona proved quiet and stable most all the time.
- John Kiewicz

View Photo Gallery | 5 Photos
Photo 5/5   |   2006 Kia Sedona profile
"On a seven-percent-downward slope, power sliding door won't completely open, but closes after the attempt, which could possibly hurt a small child."
-Julia LaPalme
"Drove the Sedona up to the Nevada City/Grass Valley area over the Labor Day weekend. This thing was a small miracle. Perfect size -- bigger than its predecessor, a bit smaller than the Sienna/Odyssey. In-laws have an Odyssey and after driving it, I felt the Sedona is smoother-riding and quieter. Agree about the sliding doors -- they can get out of hand on grades." - Kim Reynolds