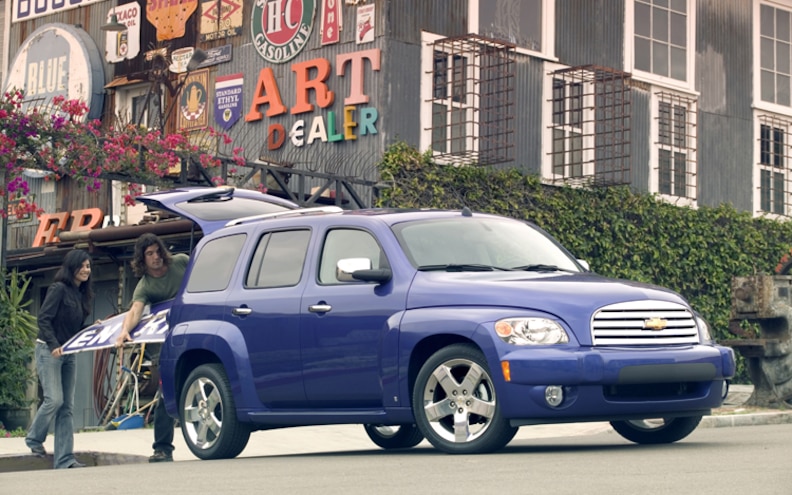 View Photo Gallery | 8 Photos
Photo 2/8   |   2009 Chevy HHR front Three Quarters View
Whether you like its retro-themed style or not, the Chevrolet HHR is arguably better looking than the PT Cruiser -- the car to which it's been so closely compared. And according to GM's sales figures, the HHR is selling very well, while the PT is headed off to the scrap heap shortly. The Bow Tie folks are reporting an eight percent sales increase in the first half of 2008 compared to the same time last year, a trend likely aided by the newly-released HHR SS and higher gas prices.
For the 2009 model year, Chevrolet is adding a "blank canvas" Panel SS version to the HHR lineup aimed at giving performance minded customers or business owners the best option in expressing their "automotive creativity." Also revised for the upcoming model year is the base 2.2-liter Ecotec engine that is now outfitted with variable valve timing. The resulting unit is modestly bumped by six horsepower to 155. Flex-fuel capability in its 2.2-liter and 2.4-liter four-cylinder engines is also now available on all LS and LT models, further aiding in fuel economy.
Inside the 2009 HHR's cabin, passengers will find a slightly revised interior. Window switches have been moved to each of the doors, while new cup holders keep drinks better in place while in transit according to Chevy. Refreshed interior lighting is in place, as is standard XM Radio and OnStar. Like previous models, a 60/40 rear seat and fully-folding front passenger chair are standard on all models. Available Bluetooth connectivity and a rear back up camera are new for 2009 as well. All HHR models receive roof rail side airbags on top of StabiliTrak traction control and anti-lock brakes for added safety. 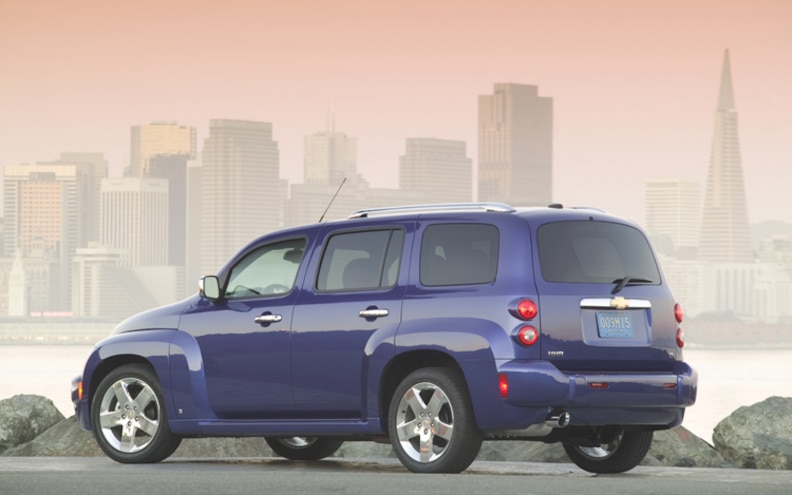 View Photo Gallery | 8 Photos
Photo 3/8   |   2009 Chevy HHR rear Three Quarters View
Three fresh color choices -- Silver Ice Metallic, Gold Mist Metallic and Aqua Blue Metallic -- have been added the HHR's color pallet. Owners will be given the choice of smoke or silver strip packaging should they really want to go retro.
GM's Performance Division had some fun for 2009 and mixed the newly introduced flat panel HHR model with its sportier and racier HHR SS, resulting in the HHR Panel SS. If you're not already in the know, HHRs equipped with panels have no rear windows and doors, but instead metal paneling - a trait akin to the 1949 Chevrolet Suburban. Rear seating has been removed, giving the Panel a large, flat cargo floor complete with ties downs and hidden storage compartments.
Like the HHR SS, the Panel SS uses an Ecotec 2.0-liter direct-injection turbo four-cylinder taken from the Pontiac Solstice and Saturn Sky Red Line. The boosted engine makes a hearty 260 horsepower and 260 lb-ft of torque that is sent to the front wheels via an F35 five-speed manual. An automatic gearbox is available, but those opting for it will lose 10 ponies. According to Chevrolet, both Nurburgring tested SS models can hit 60 in 6.3 seconds and reach a top speed of over 150 mph. Cornering ability is improved thanks in part to a standard limited-slip differential and a sport tuned suspension. Down the drag strip, the SS-badged HHR takes roughly 14.8 seconds at 98.5 mph to cover a quarter mile. 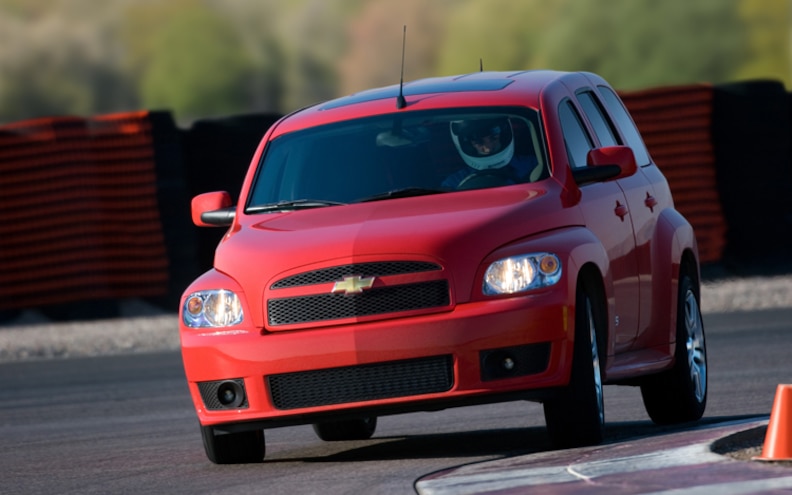 View Photo Gallery | 8 Photos
Photo 4/8   |   2009 Chevy HHR SS front View
While much the same exterior and chassis setup can be found on the previous HHR LS and LT models, distinguishing the SS versions are new 18-inch forged aluminum wheels set ahead of four-piston Brembo brakes up front. Unique mesh grilles and body colored accents adorn the outside, as does the mandatory "SS" badging.
Inside the SS models is a sportier cabin space clad with extra bolstered sport seats marked with SS logos, a smaller diameter sport steering wheel and short throw shifter positioned higher for an easier reach. For 2009, a reconfigurable performance display much like the unit found in the Pontiac G8 GT has been placed in the A-pillar and records zero to sixty and lateral acceleration numbers.
With more consumers heading down market to smaller, more fuel efficient crossovers, the 2009 Chevrolet HHR looks likely to maintain its sales traction into the 2009 model year against some strong class competitors. 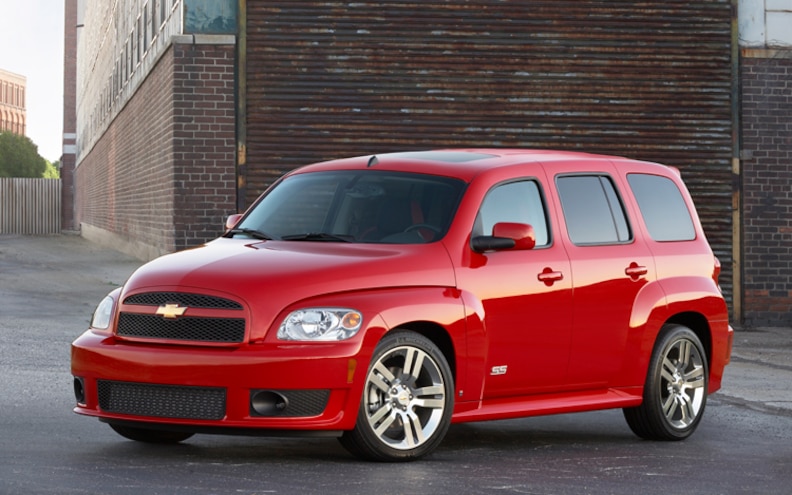 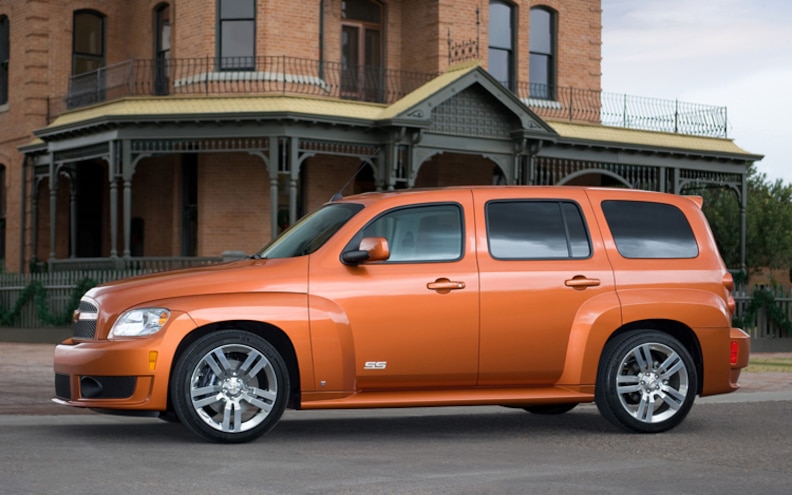 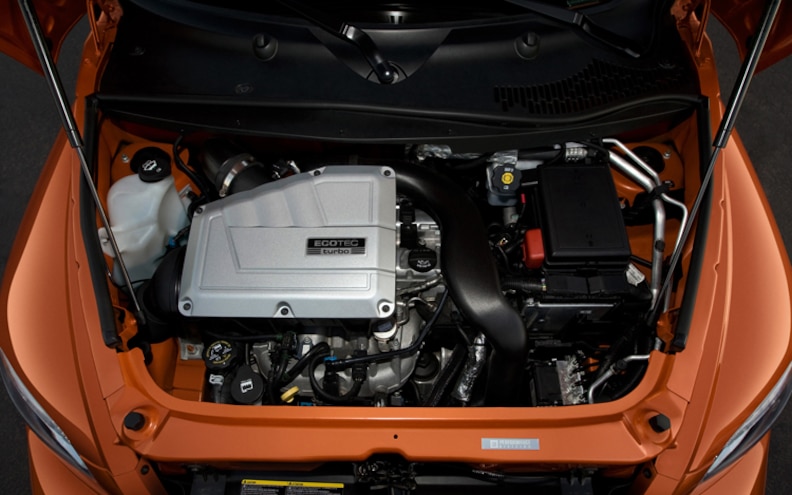 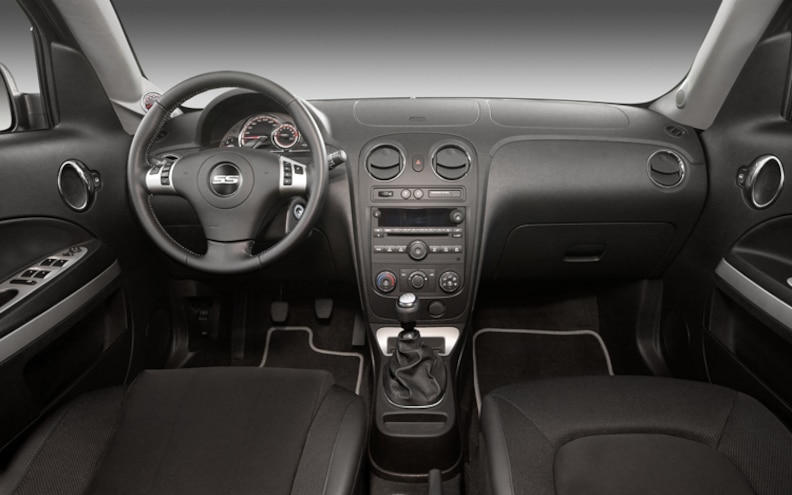