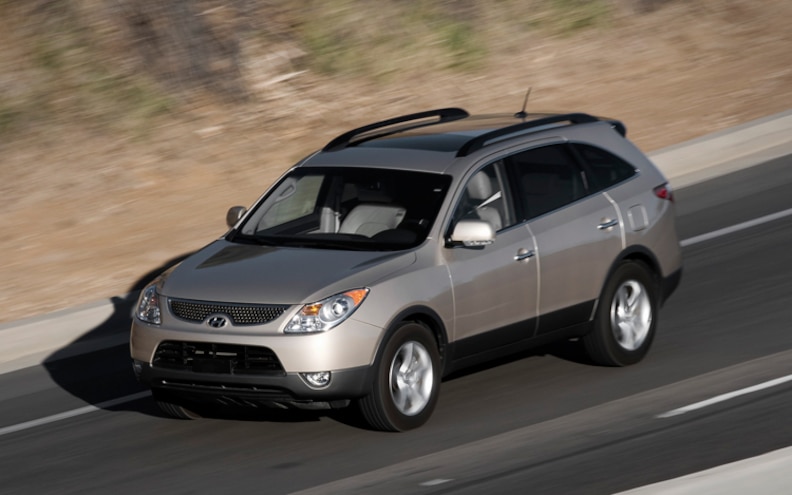 View Photo Gallery | 11 Photos
Photo 2/11   |   2008 Hyundai Veracruz front Three Quarters View
Maybe they should've called it the Genesis Crossover. The Hyundai Veracruz was one of the first salvos in the Korean automaker's recent new-product assault on the U.S. market, which has been followed by the intros of the much-hyped Genesis Sedan and Coupe.
The Veracruz has been generally well received since its launch in March 2007 and scored an impressive comparison test victory against the 2008 Lexus RX 350 in July of that year. But despite the positive vibes, only 11,004 Veracruz sport/utes moved off Hyundai dealership lots in 2008 (in case you're wondering, Toyota sold more than 84,000 RXs over the same period). Yes, we know, 2008 was a bad year to be selling SUVs, but...Is it too late to change the name? 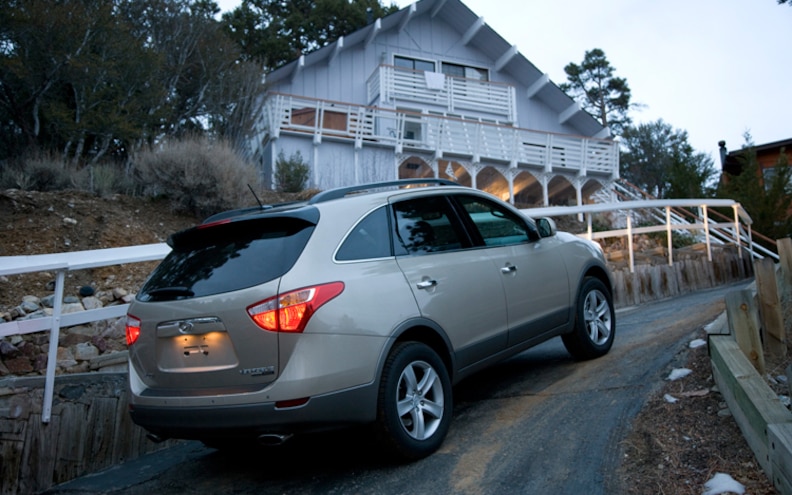 View Photo Gallery | 11 Photos
Photo 3/11   |   2008 Hyundai Veracruz rear Three Quarters View
So while it hasn't exactly been shooting up the sales charts like a bullet, the Veracruz, as was the Genesis models that followed it, is also about showing critics that Hyundai can make a $38,320 crossover that's not only worth the money, but is also competitive with the best the world has to offer.
After a year behind the Veracruz's power-adjustable, leather-trimmed steering wheel, consider our perceptions changed. 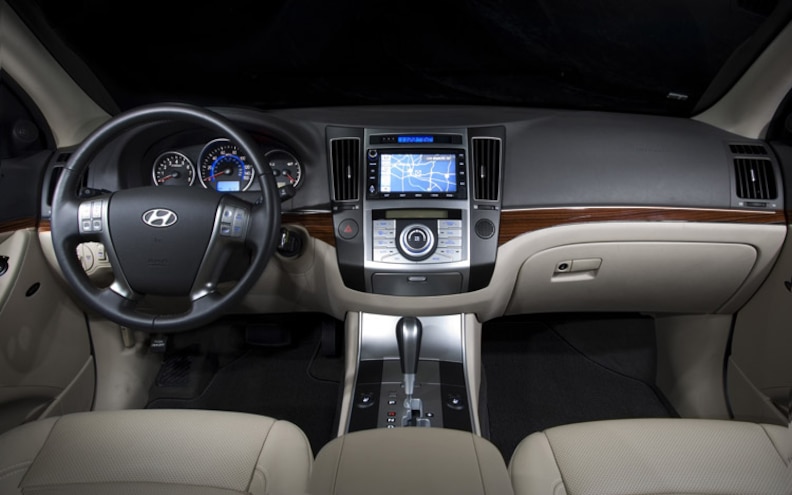 View Photo Gallery | 11 Photos
Photo 4/11   |   2008 Hyundai Veracruz interior
"I almost hate to admit how much I like this Veracruz -- so much for my Pennzoil-fed enthusiast's heart," opined editor at large Arthur St. Antoine. "It goes down the road expensively. It shifts expensively. It rides expensively."
Senior editor Edward Loh offered many the same observations about the Veracruz's overall ride, calling it "smooth, quiet, refined, and willing to get up and boogie when needed."

View Photo Gallery | 11 Photos
Photo 5/11   |   2008 Hyundai Veracruz front
Powering the Veracruz is Hyundai's 3.8-liter, DOHC V-6, which is roughly the same engine you'll find in the V-6 Genesis Sedan and the Genesis Coupe 3.8, although in the Veracruz it puts out 260 horsepower and 257 pound-feet. Mated to a smooth-shifting six-speed automatic with Hyundai's Shiftronic manual setup, it pushed our tester to 60 mph in 8.0 seconds flat and onto a quarter mile of 16.3 at 86.5 mph.
We found the power more than adequate to propel the 4620-pound AWD crossover through just about any situation during our 22,684 miles occupying the well-executed and attractive leather-trimmed cockpit.

View Photo Gallery | 11 Photos
Photo 6/11   |   2008 Hyundai Veracruz open Tailgate
Take, for instance, photographer Brian Vance's long-distance jaunt, during which the Hyundai was more loaded than a crew of spring breakers after sucking down a tray of Jell-O shots.
"Perhaps what's most impressive about the biggest Hyundai sport/ute ever offered in the U.S. is the smooth and polished transmission," Vance logged. "This six-speed might be the best automatic in the class, and even at wide-open throttle it transitions up or down to the next gear with almost no noticeable upset to the chassis. Paired with the 3.8L V-6, the Veracruz hauled our full load up the steep, long grade north of Bishop, California, at a steady 85 mph, with plenty of power to spare."

View Photo Gallery | 11 Photos
Photo 7/11   |   2008 Hyundai Veracruz engine
With 86.3 cubic feet of cargo room when the second and third rows are folded down and 40.0 with just the third row down, the Veracruz offers a solid amount of cargo space, as Vance found out (the RX, in comparison, offers 80.3 and 40.0, respectively). And that third row can actually fit adult humans.
The Veracruz also proved trouble-free from a maintenance standpoint, requiring nothing more than two service visits during its stay -- a $110.99 oil change, inspection, and tire rotation at 7500 miles and a $190.11 replica service that also included replacement of the cabin air filter, at 15,000 miles. And for normal-wear costs, the Hyundai accrued a balance of only $40.33 for new wiper blades. 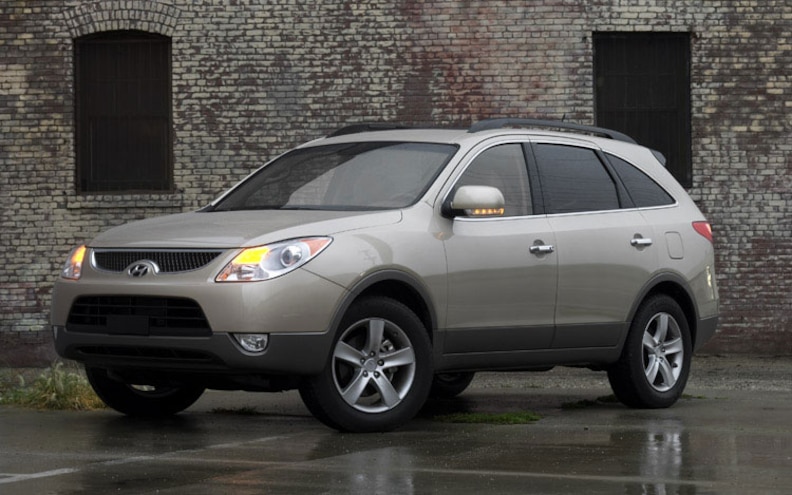 View Photo Gallery | 11 Photos
Photo 8/11   |   2008 Hyundai Veracruz Limited AWD front Three Quarters View
There was some picking of nits, most notably with the optional $1750 navigation system -- Hyundai's first -- which could take too long to boot up and be hard to see during the day and too bright at night. The power tailgate was cited as too slow, and the 2008 model didn't come with a backup camera option -- a must-have in the segment.
And while the overall exterior look is clean and nonthreatening, the Veracruz almost blends in too much and falls short of making a design statement.

View Photo Gallery | 11 Photos
Photo 9/11   |   2008 Hyundai Veracruz cockpit
Gas mileage was nothing to shout about either, with an overall combined fuel economy of 16.1 mpg, south of the EPA estimated 18 mpg combined. For context, our similarly sized long-term Mazda CX-9 returned 17 mpg. It's always important to note, however, that we tend to be leadfoots in our test vehicles to better evaluate them under acceleration.
In the end, though, we found much to like and not so much to carp about during our year-long ride in the Veracruz. And despite it not exactly hitting its sales stride thus far, Hyundai has created an SUV we deemed more than worthy of consideration in the three-row-crossover segment. Now, about that name...How about Genesis X?

View Photo Gallery | 11 Photos
Photo 11/11   |   2008 Hyundai Veracruz tailgate Badge
"It took all of 10 minutes to get to Chronic Tacos-and to convince my brother that, Hyundai or no, this Veracruz is a pretty sweet ride. It's not hard to do, with a quality-looking interior, rockin' stereo, ultra-smooth transmission, and enough power to feel impressive. His chief complaint was the styling, insisting the Veracruz looks like "something an old lady would drive." Can't win 'em all, I guess."
- Rory Jurnecka

- OF
By Mike Floyd
72 Articles