Physics Pulls Off Another Win -- Barely 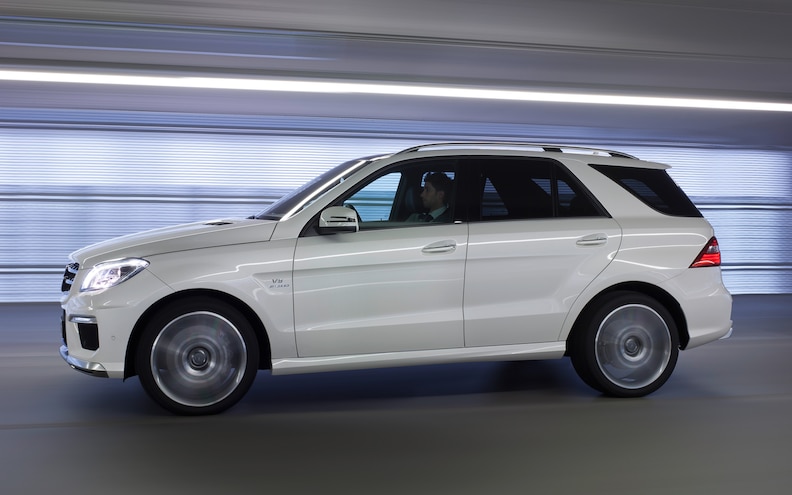 "Who buys these things?" This question keeps rattling around the press launch of the 2013 Mercedes-Benz ML63, AMG's new rocket-powered soccer-mom sled. No rational person can make an argument for buying a 525-hp SUV. The fact that AMG offers a performance package that bumps the power up to 557 hp makes me believe there aren't a lot of rational people responsible for building them, either. Have we mentioned we love AMG?
The ML was refreshed for 2012 and put in an extremely strong showing at Motor Trend's SUV of the Year event. Judges loved the smooth ride and quiet, composed cruising of both the diesel and gas versions of the midsize SUV. The AMG-tuned version has many of the same qualities, with the performance muscle of a sports sedan. Ola Kallenius, chairman of the Management Board of AMG, listed the qualities that make up an AMG product: performance, classiness, efficiency. "AMG products provide the highest performance while never being annoying in fulfilling the utility you expect of any Mercedes product," he says.
View Photo Gallery | 21 Photos
Photo 2/21   |   2013 Mercedes Benz ML 63 AMG Front View
At cruising speeds, the mellow burble of the 5.5-liter V-8 is the only thing that hints at this SUV's performance potential. Despite the two sound-killing turbos, AMG has managed to create a modern musclecar soundtrack that turns heads and molds grins on the faces of the most hardened L.A. commuters. The AMG Speedshift 7G-Tronic transmission has tall gearing and is always chasing the highest gear possible. It helps the new model achieve 28% greater efficiency over the past ML AMG, but it seems tragic that such a great engine will live most of its life below 2500 rpm. Cruising down PCH in Malibu, the high-tech lump trundles along at 1500 rpm without complaint. Prodding the throttle to shoot through openings in traffic results in a whistling warble from the turbo and a wave of torque as boost builds to 516 lb-ft. Performance Package-equipped cars twist out 561 lb-ft as low as 2000 rpm, making the 5200-pound SUV feel like point-and-shoot artillery.
View Photo Gallery | 21 Photos
Photo 3/21   |   2013 Mercedes Benz ML 63 AMG Rear View
The winding canyon roads above Malibu give insight directly into the soul of the beast. Console-mounted buttons summon more sporting personalities from the suspension and transmission. While Comfort mode is preferable around town, Sport and Sport+ modes tighten things up and allow for faster reactions. To accomplish this complete manipulation of the ML63's dynamics, AMG uses active damping control, active anti-roll bars, and airbags instead of coil springs. Sport mode is the best compromise for anything but the smoothest of roads. Directional changes happen fast and predictably on undulating switchbacks. The SUV never achieves the light, tossable feeling of a sports car, but rather beats physics into submission with big contact patches and intelligent suspension. In tight quarters, physics battles back, throwing hairpins and big braking areas at the heavyweight powerhouse. Even the best engineers haven't mastered anti-mass technology, and all those pounds want to obey Newton's First Law of Motion.
When things start to get a little too hot, the vehicle understeers and bleeds off speed with squealing front tires grinding outside of the intended line. Suddenly all 2-and-half tons of high-riding SUV strong-arm the electronics and bring things back to reality. Even with a 40/60 front/rear power split, the stability control won't allow you to drive the car with the throttle. Once things start to get out of shape, the electronics call a timeout and reel things back in. It is amazing just how hard you have to push to find those limits, and the idea of any rational person finding them is unlikely.
View Photo Gallery | 21 Photos
Photo 10/21   |   2013 Mercedes Benz ML 63 AMG Front Profile In Motion
Steering feel is surprisingly good through the contoured and sueded wheel. The seats are more than up to the task of holding passengers in place, and the bolsters don't get in the way of ingress and egress. Although the seats have the height adjustment of a barber's chair, even in their lowest position the height of the vehicle still gives a parade-float view of the road. Interior quality took a major leap forward in the redesigned ML, and the AMG version takes it another step farther. Material quality is luxurious and attention to detail abounds in spots only contortionists would be able to see. Even the doorjambs look as though they spent time in the design department to match the clean, uncluttered aesthetic. For those seeking something even more exclusive, Mercedes Designo can create custom interiors with contrasting leathers, rare trim materials, and even exclusive paints.
View Photo Gallery | 21 Photos
Photo 11/21   |   2013 Mercedes Benz ML 63 AMG Rear Three Quarters In Motion
Herr Kallenius boasts that the new ML 63 AMG is the most powerful SUV for sale today. In the same train of thought, he also says the AMG biturbo V-8 is among the cleanest engines for the power output. "AMG is a test lab for new technology that will trickle down into lower segments at Mercedes." So while a 557-hp SUV may seem like overkill, let's all remember it is paving the way to cleaner, more efficient versions of lower-spec Mercedes. That might be all the rationalization needed to buy one of these.
View Photo Gallery | 21 Photos
Photo 12/21   |   2013 Mercedes Benz ML 63 AMG Rear Hatch

- OF
By Michael Febbo
110 Articles