Impreza Becomes an SUV Once More 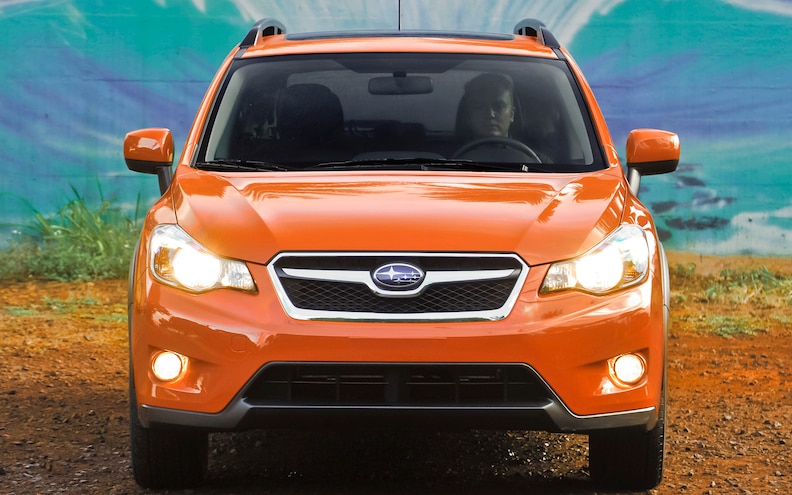 Subaru was one of the first manufacturers to jump into what would become the crossover SUV market with the introduction of the Impreza-based Forster in the mid-1990s. With the 2008 launch of the third-generation model, the Forester left its Impreza roots behind, but the absence of an Impreza-based SUV would not last long. The new 2013 Subaru XV Crosstrek not only brings the Impreza back into the SUV game, but its more of an Impreza than the Foresters that preceded it.
View Photo Gallery | 16 Photos
Photo 2/16   |   2013 Subaru XV Crosstrek Front Three Quarter In Motion
The interior of the Crosstrek is nearly identical to that of Impreza, save a few minor differences: the instrument cluster, a plastic cargo tray, and privacy glass. This similarity is hardly surprising -- it's both easy and cost effective to use as much as you can from what you have on hand. You sit in, not on, the firm yet comfortable seats, which have just enough bolstering keep you in place. For such a relatively small vehicle, the Crosstrek has a surprising amount of room inside. I could easily sit behind myself with plenty of headroom. Being 6'2", that's not something I can say about every vehicle.
On the outside, Subaru has given the Crosstrek its own distinctive character and a much more dramatic look than the Impreza. It has unique black side and wheel arch cladding with cutaway ends that provide a cleaner look, and though the roof rails might look like any other, the Crosstrek's have one significant difference: At the end of each is a little "spoiler," a minor change that improves fuel economy by a full mpg. (Models fitted with a CVT get 25 mpg city/33 mpg highway/28 mpg combined, and those equipped with the manual get slightly less.)
View Photo Gallery | 16 Photos
Photo 3/16   |   2013 Subaru XV Crosstrek Rear Three Quarter
Only one engine is available for the U.S.-market Crosstrek: a 2.0-liter flat-four that puts out a mere 148 hp and 145 lb-ft of torque. Transmission choices total two: a five-speed manual and a CVT. The manual is standard on the base Premium trim, while the Limited comes standard with the CVT. Those wishing to row their own gears should note that the manual cannot be had with the optional navigation system.
We got to sample both transmissions our drive, which consisted of both on- and off-road driving, and found that the five-speed made the Crosstrek much more enjoyable to drive. Being able to row your own makes a big difference in how lively it feels. Since it is neither a hardcore SUV nor a completely on-road vehicle, Subaru had to balance on-road feel with off-road capabilities, a job it accomplished very well. On the highway, the Crosstrek had a smooth feel, and when we hit broken road, the suspension absorbed the bumps nicely -- not too firm, not too soft. We couldn't get a feel for more spirited driving feel, specifically how the Crosstrek felt going through a corner hard, partly because the two-lane roads of Oahu often are clogged with slow-moving vehicles. We're guessing it will be similar to the behavior of other Subarus, exhibiting a little bit of body roll with the AWD system pulling you nicely through the corner.
Boasting 8.7 inches of ground clearance, about 3 more than an Impreza, the Crosstrek had no problem playing on the off-road section of our drive loop. We encountered rocks, sand, gravel, mud, and the occasional shallow creek crossing. It wasn't the Rubicon, but it did give us plenty of chances to see how the Crosstrek handled itself. Three inches might not sound like much, but it will come in quite handy when Subaru's adventurous buyers decide to hit a snowy trail.
View Photo Gallery | 16 Photos
Photo 10/16   |   2013 Subaru XV Crosstrek Front End
According to Subaru, its customers are active individuals who are four times more likely to hike and 3.5 times more likely to bike compared to your average customer. The target buyer is what Subaru calls a "youthful explorer," someone who seeks particular attributes in their vehicle. They want something that can handle all-around adventure, has flexible capabilities, is equipped for fun, and, of course, is safe. Subaru feels it has hit the nail on the head with the XV Crosstrek, and we agree. It's not a sports car by any means, but it is a sporty, capable, and fun CUV that will definitely fill a void in Subaru's lineup.