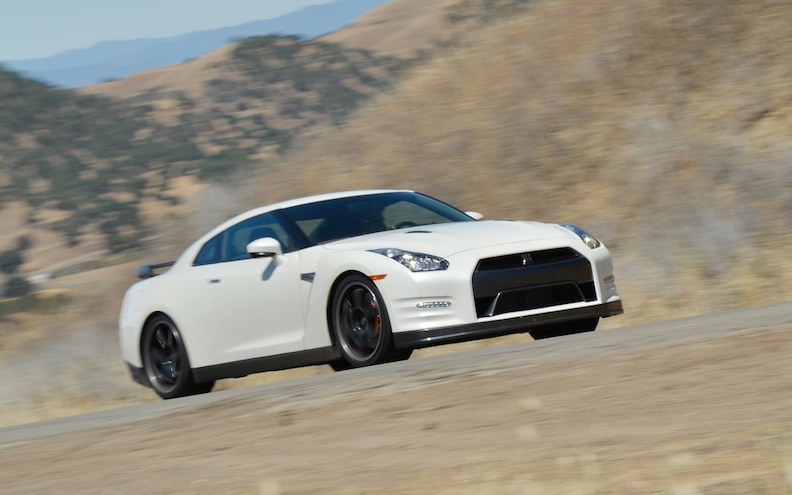 I have a confession to make: For the last few thousand miles, Godzilla has been driving around with a hideous blemish on her beautiful nose. It happened several months ago, but I’m only now able to talk about it. A frazzled staffer (who shall anonymously carry the shame of his atrocity), in great haste to retrieve a forgotten passport, jumped into our Range Rover Evoque and roared out of our garage, headed for home. Passport in hand, but lost in thought upon his return, this staffer didn’t realize the scraping sound coming from the right-hand side of the Evoque wasn’t the latest poptastic incantation from Kesha Minaj, but the sheetmetal of an expensive British SUV being lightly dragged across the corner of an even more expensive Japanese sports car.
View Photo Gallery | 13 Photos
Photo 2/13   |   2013 Nissan GT R Black Edition Front Three Quarters In Motion
As bad as it sounds (and sounded), damage to both was surprisingly light. The photo shows the results are mostly scuff marks from where the paint transferred from red Evoque to white GT-R—or rubbed away completely.
Outside of this incident, our GT-R has been running fine, with no mechanical troubles, except for an odd incident with the infotainment system. On two separate occasions, the entire infotainment system has restarted itself several times in a row before settling down to normal operation. It was only a minor annoyance lasting 5-10 minutes, so we forgot to mention it at the last service. We did email our friends at Nissan who confirmed that there is an issue with “that generation of IT systems, not restricted to the GT-R.” Apparently a solution is in the works and a service bulletin will be issued. We’ll keep you informed.
View Photo Gallery | 13 Photos
Photo 3/13   |   2013 Nissan GT R Bumper Scrape

"For much of the last 12 months, this has been what I see leaving work each day. Almost time to turn her in...sigh."

We’re nearly through our second set of Dunlop SP Sport tires, which we put on at BDC. Though they transmit an irritating amount of road noise and shock on anything less than glass-smooth pavement, they return amazing grip on any surface. In this regard, they are truly magical tires, worth every penny of their $2200 price (TireRack.com). We’ll likely swap onto new rubber at our next service, which will be a doozy, since it requires a full oil change, including differentials. Our brakes are starting to squeak and pedal engagement is feeling long, so those issues will be addressed as well. Then it will be sayonara. Gulp.
View Photo Gallery | 13 Photos
Photo 4/13   |   2013 Nissan GT R Black Edition Rear Three Quarters