A Unibody SUV That Stands Out From the Crossover Crowd 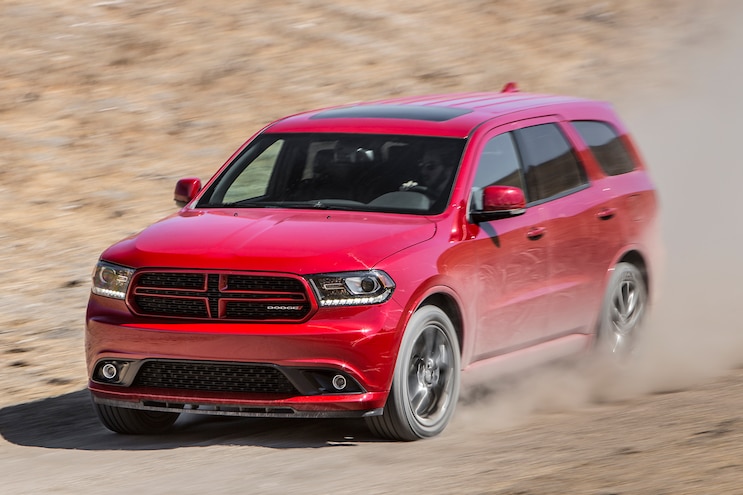 The last time we tried out the Durango, we were highly impressed with how Dodge had made the successful transition from body-on-frame to unibody, with less compromise than with other vehicles that had made the same jump. With that model, which was new for 2011, styling was better than it had been in years, power was great, the interior packaging was impressive, and the still-rear-drive SUV could tow.
Compared with others that also made the unibody switch, the Durango provides the least amount of compromise for people who still need a vehicle that can do work. And when it participated in the 2012 Sport/Utility of the Year event, it truly impressed everyone who drove it. However, two key elements were missing: an eight-speed transmission and a modern interior. For 2014, the Durango has both, and retains all the attributes we so liked from two years ago. 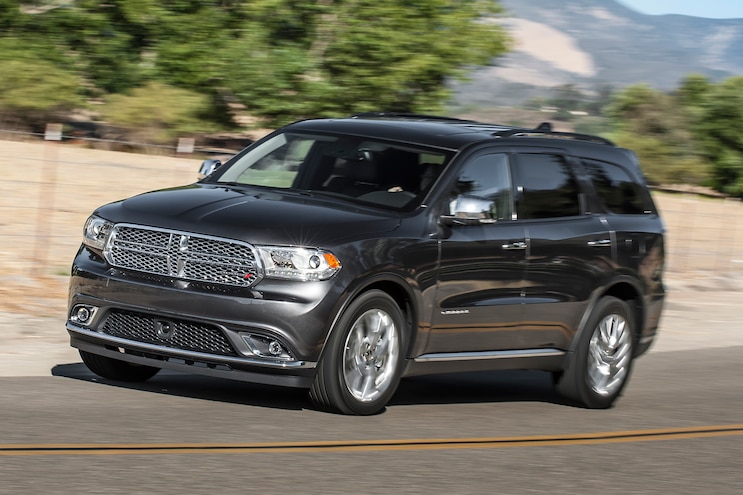 View Photo Gallery | 26 Photos
Photo 2/26   |   2014 Dodge Durango Citrdel AWD Three Quarters
We evaluated a Citadel powered by the 3.6-liter Pentastar V-6 and an R/T with the 5.7-liter Hemi V-8. Unlike the 2012 models, which had a five-speed automatic behind the V-6 and a six-speed auto behind the V-8, both engines now come standard with a ZF eight-speed automatic. And the differences, in addition to the rotary shifter, were apparent right from the start.
When powered by the 3.6-liter, the Durango is certainly capable, but not fast enough to make your heart race. Yet acceleration is smoother, and while it isn't quick -- it's 290 hp powering a 5125-pound vehicle -- it does a fine job of keeping up with traffic. Despite the Citadel weighing 120 poundsmore than the 2012 V-6 Crew we tested, the 2014 with the V-6 went from 0 to 60 in 8.0 seconds and completed the quarter mile in 16.1 seconds at 86.9 mph. That's a huge improvement from just two years ago, when the V-6 needed 9.0 seconds to reach 60 and 16.7 seconds to finish the quarter mile, at 85.9 mph. But making a vehicle a full second faster to 60 mph with no change in hp or torque? That's impressive.
The R/T was the fire-breather of the two. Its engine puts out a wonderful growl, which gets downright raunchy at wide-open throttle. Like the V-6, the Hemi didn't receive any added horsepower or torque for 2014, but the ZF trans made a big difference here, too. The 2014 R/T only weighed 4 pounds more than the 2012 R/T we sampled, so this is about as close to an apples-to-apples comparison as you can find. The 2014 R/T hit 60 in 6.6 seconds and finished the quarter mile in 15.0 seconds at 93.2 mph, as opposed to the 2012 R/T, which went 0-60 in 7.3 seconds and ran the quarter mile in 15.6 seconds at 87.9 mph. Did we mention that in addition to being faster, it now also gets better fuel economy?
We already were impressed with the Durango's ride and handling, both of which were better than expected for a three-row SUV. While both 2014 Durangos have a comfortable ride and feel well planted, the R/T's firmer suspension tuning made it feel more confident on twisty roads than the Citadel, and both Durangos handle so well that it's easy to forget that even the lighter Durango we tested weighs more than 5100 pounds. The steering response was impressive with both as well.
If there is one area that was a bit of a letdown, it was the interior. There were attractive updates, inside and out. The most noticeable difference on the body is the new taillights, which resemble those on current Dodge cars. The cabin has been updated with a new steering wheel, lighter and brighter accents, and a better overall appearance. The new technologies inside the cabin, including Uconnect and a new nav system, are easy to use, and the nav is a huge improvement. But the cabin does let in some noise, and for a $44,000-plus as-tested price, it would be nice if the interior materials were more upscale. But all three rows are comfortable and roomy, and it may be that the cabin materials are built to last.
The Durango was already a good vehicle that came to market missing just a few key elements. Yet thanks to some careful work by the engineers at Dodge, the Durango proved a pleasant surprise. Now if only there were an SRT version…