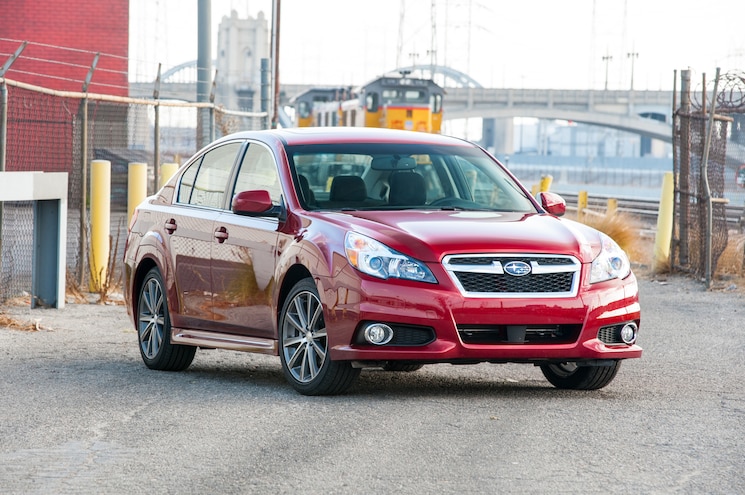 We know the redesigned 2015 Subaru Legacy will bear a resemblance to the handsome Legacy concept that debuted last year, but until the automaker's latest and greatest midsize sedan bows at the 2014 Chicago auto show, the best four-cylinder family-hauler we can ask for from the "Confidence in Motion" crew is the car you see here, a 2014 Subaru Legacy 2.5i Sport.
Introduced for the 2014 model year, the 2.5i Sport raises the ante (ever so slightly over the 2.5i Premium) with fog lamps, a power moonroof, and -- here come the sporty bits -- faux carbon-fiber accent trim and 7.5 x 18-inch alloy wheels shod with V-rated 225/45 Bridgestone Turanza EL400-02 all-season tires. Skeptical? We were, too. So we brought one in for a full round of testing. 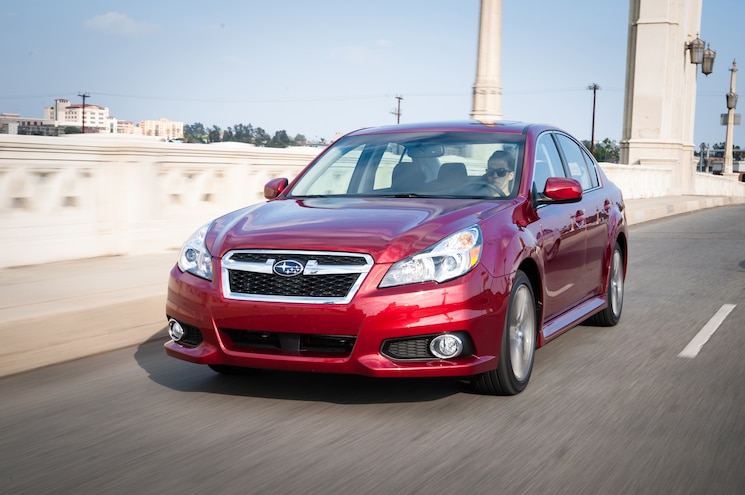 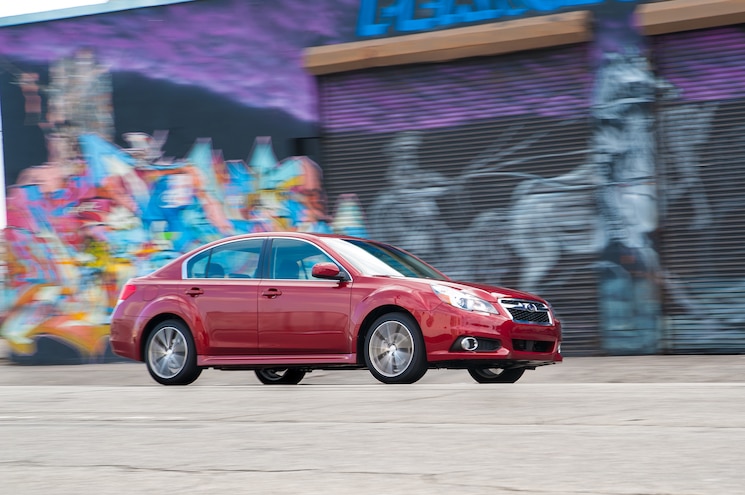 View Photo Gallery | 30 Photos
Photo 6/30   |   2014 Subaru Legacy Sport Side In Motion
As the chaperone of our long-term Honda Accord Sport, I seemed a good fit to evaluate Subaru’s direct competitor. Each of these made-in-the-USA sedans features 18-inch alloys, the all-important “Sport” badge, and a DOHC four-cylinder mated to a continuously variable automatic (CVT) with paddle shifters. The main difference being the Honda actually lives up to its sport designation. With 189 horsepower and 182 pound-feet of torque, the 3328-pound front-drive Accord zips from 0 to 60 mph in 7.5 seconds and through the quarter mile in 15.8 seconds at 90.8 mph. Both times are quick for the class. Even better, the Honda’s 235/45 Michelins hang on for 0.88 g of maximum lateral grip – not too far off the lateral prowess of the Legacy’s rear-drive sibling, the BRZ (0.90 g).
On the other hand, the 3410-pound, all-wheel-drive Legacy, which boasts 173 horsepower and 174 pound-feet, requires 8.8 seconds to hit 60 and 16.8 ticks at 83.6 mph to knock off the quarter mile. To find a comparable Honda, you’d have to step a class down to the 2014 Civic EX-L, which registered the same times. Just as disappointing, though, were the Legacy’s handling numbers. With no suspension mods and just the wheel upgrade, maximum lateral acceleration came in at 0.80 g (a Forester XT crossover will do 0.79 g) and its figure-eight time of 28.0 seconds was 1.3 behind the Accord’s. At least the Subaru’s four-wheel discs outshined the Accord’s in 60-0 braking (125 feet vs. 129). 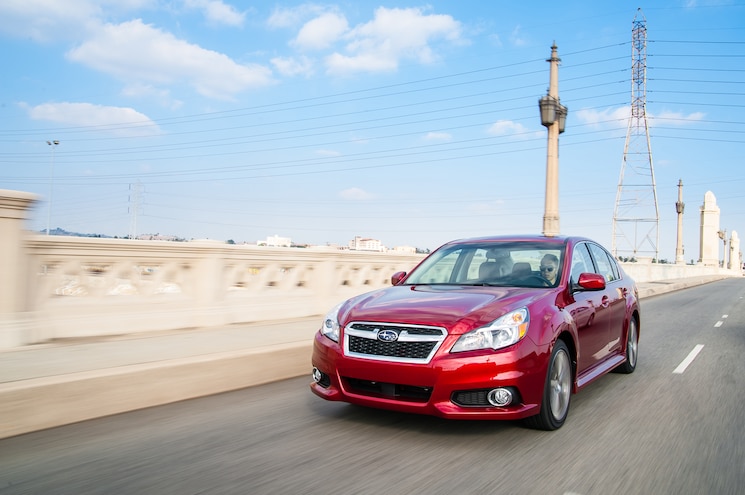 View Photo Gallery | 30 Photos
Photo 7/30   |   2014 Subaru Legacy Sport Front Three Quarter In Motion 03
The Legacy Sport’s lack of sportiness wouldn’t seem so glaring if it outperformed the Accord in other important facets. It doesn’t. EPA rated at 24/32 mpg city/highway, the 2.5-liter Subaru trails the 2.4-liter Honda (26/34) by a significant two in both the city and on the highway. The Accord also offers more interior volume, rear-seat legroom, and cargo space, making it the more accommodating family transporter. That said, on my 1232-mile mostly highway stint in the Legacy, I did see 29.5 mpg – impressive for an AWD midsize sedan – and experienced no space issues hauling around my two kids and all their gear. Further, the Subaru’s standard AWD does have its advantages in the snow and wet.
Price? The Legacy Sport (PZEV) starts at $26,340, and comes well equipped with satellite radio, Bluetooth phone/audio, 10-way power driver’s seat, keyless entry, and leather-wrapped steering wheel and shifter. Our tester also had the optional $1300 navigation system, bringing the total to $27,640. An Accord Sport CVT, on the other hand, opens (and closes) at $25,305 – there are no nav or satellite radio options – so its value advantage comes with caveats. 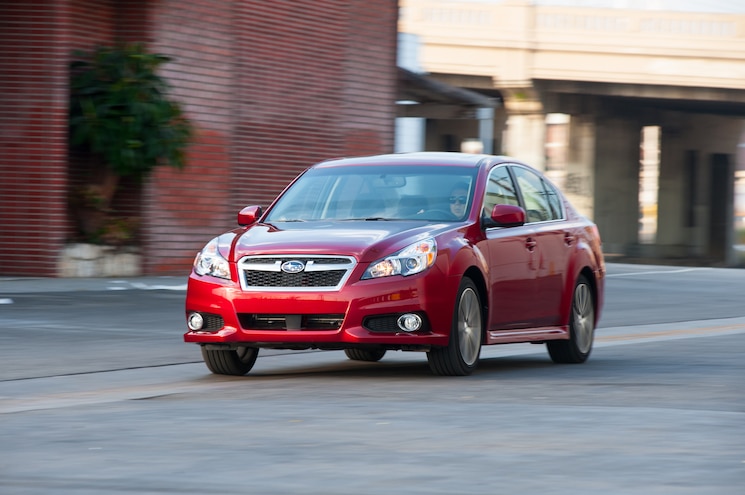 View Photo Gallery | 30 Photos
Photo 17/30   |   2014 Subaru Legacy Sport Front Three Quarters In Motion
In terms of safety, the Legacy received tops scores from both NHTSA (five-star overall rating) and IIHS (Top Safety Pick+). Ditto for the Accord. That said, the Honda achieved a Good rating in IIHS’s new small-overlap test, edging the Legacy’s Acceptable score.
While this Legacy doesn’t quite live up to its badge, the upcoming all-new generation means there’s hope of a legitimate Sport in the future. After all, can you imagine a 2015 model with 19-inch wheels, 235/40 summer tires, the Forester XT’s 2.0-liter 250-hp turbo four and sport-tuned CVT, and 90 percent of the concept’s good looks? We can. 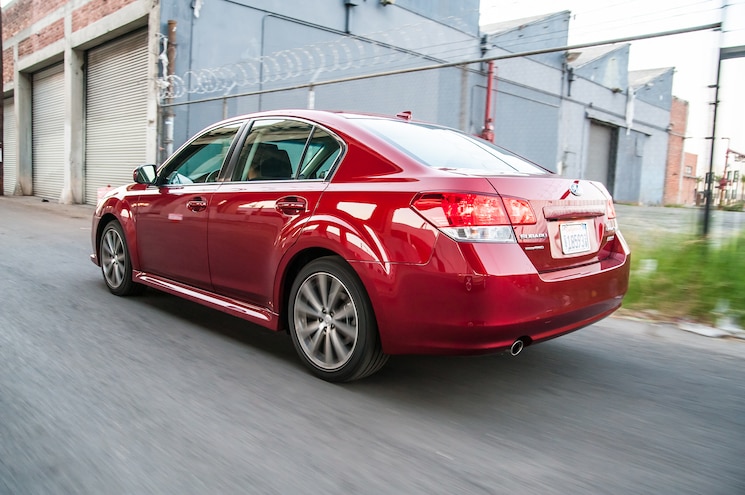