Pushing the Limits in Porsche's Quickest-Ever 911 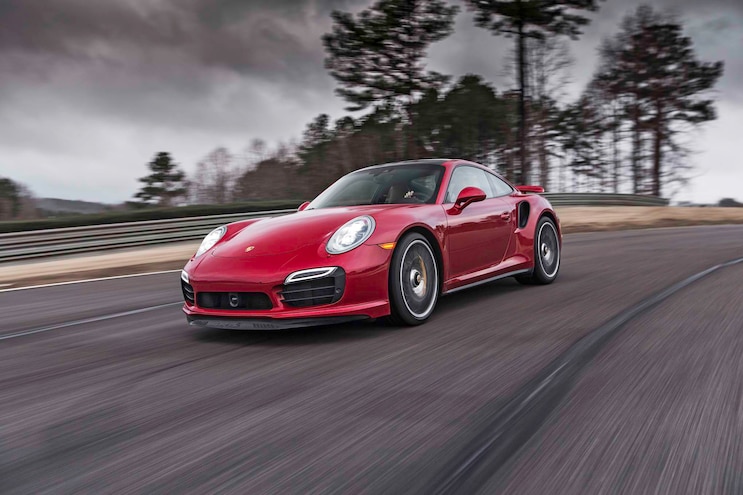 Most people would be happy with a Porsche 911 Turbo. After all, we're talking about a $150,000 all-wheel-drive sports car -- with 520 horsepower -- that can hit 60 mph in about 3 seconds flat. Maybe less. I say again, "most people." I was recently in this particular 2014 911 Turbo S at John Hennessey's shop just outside of Houston. He's got a dragstrip out back and we spent a lovely afternoon launching the Turbo S and one of his juiced-up Cadillac CTS-V HPE750 Coupes. As you might guess, the 750 stands for 750 hp. The Turbo S "only" has 560 hp -- a 40-hp bump over the garden-variety 911 Turbo -- yet it was able to clip John's car in the quarter-mile, 11.2 seconds versus 11.4 for the rear-drive Caddy. Both John and I weigh more than 200 pounds, and we were both in the cars as we ran them down the strip. Not only that, but the Turbo S' all-wheel-drive system absolutely hated the VHT-treated surface and paused each launch after an initial leap forward to establish traction. After one particularly brutal-feeling run in the Porsche, I asked John why he'd even bother tuning a car like this. His answer: "Two friends both have the same Porsche. One guy wants to beat his buddy." Some things are that simple. 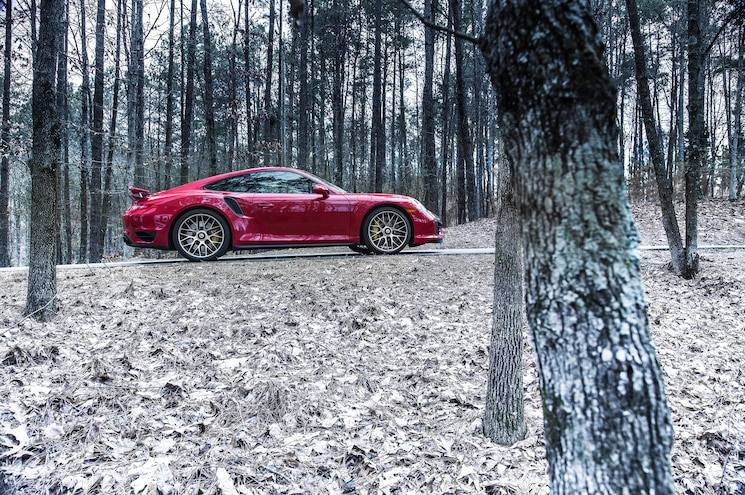 View Photo Gallery | 21 Photos
Photo 2/21   |   2014 Porsche 911 Turbo S Side Profile
I believe the above fully illustrates why the Turbo S exists. Any old periodontist can buy a Turbo, but it takes an especially power-mad tooth doc to pony up the extra $32,800 for the Turbo S. Aside from the horsepower, that extra cash nets you more torque. The 911 Turbo produces 487 lb-ft of torque from between 1950-5000 rpm. However, there's an overboost feature that tweaks the shape of the variable-geometry turbochargers between 2100-4250 rpm and allows the twin-turbo 3.8-liter flat-six to crank out a stout 524 lb-ft of torque for short bursts of time. You only get the overboost feature on the Turbo should you opt for Porsche's Sport Chrono package, a $4090 option. That feature is standard on the Turbo S, and as you may imagine, power is up. The 2014 Turbo S generates 516 lb-ft of twisting force from between 2100-4250 rpm and a bewildering 553 lb-ft of torque in overboost mode, which occurs between 2200-4000 rpm. A couple of points: One is that the Turbo S' torque-curve resembles the Turbo's in overboost mode. The other is that Volkswagen Group's old 5.0-liter, twin-turbo diesel V-10 made 553 lb-ft of torque. Damn skippy. 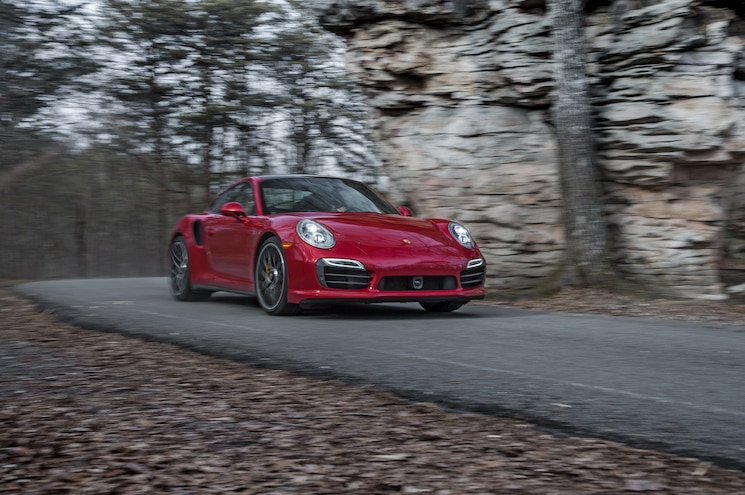 View Photo Gallery | 21 Photos
Photo 6/21   |   2014 Porsche 911 Turbo S Front Three Quarter In Motion
The Turbo S also gets brakes -- big vented and drilled carbon-ceramic Brembo brakes that are a pricey option on the Turbo at $9210. They're 16.1 inches in diameter up front, 15.4 inches in back, and work quite well, stopping the 3610-pound rear-engined beastie in just 100 feet. You might be noticing a pattern here: If something is a performance option on the downmarket Turbo, it comes standard on the Turbo S. Right you are. For the sake of piling it on, the Porsche Dynamic Chassis Control ($3160, thank you very much) that helps the dampers deal with bad, uneven surfaces is standard on the Turbo S. We typically perform our figure-eight test in a parking lot -- not the world's greatest surface -- and there's a perfectly placed bump right in the middle of one of the two braking zones. PDCC and the Turbo S' chassis as a whole deal with it quite well, as the car was able to lay down a time of 23 seconds flat. That makes it one of the best-handling cars we've ever tested, the fleetest being the Chevrolet Corvette Z06, which only required 22.8 seconds. 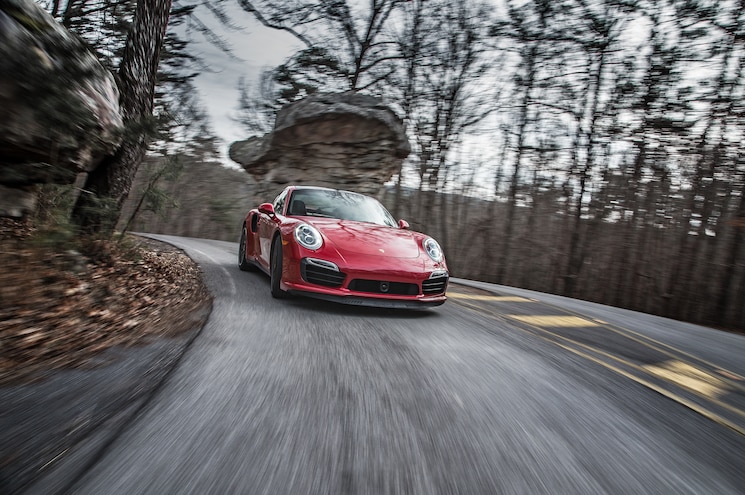 View Photo Gallery | 21 Photos
Photo 7/21   |   2014 Porsche 911 Turbo S Front End In Motion
Of course, the real story of any 911 Turbo S is how quick is it in a straight line. Answer: freakishly quick. But perhaps not as quick as you might think. The good news is that the current-generation, 911 Turbo S (991) can get to 60 miles per hour in a shockingly abrupt 2.6 seconds, making it the second-quickest production car we've ever tested to 60 mph. Number one? The 1001-hp Bugatti Veyron, meaning that we might be running into some sort of physical limit in terms of what's possible to 60 mph on street tires. Our former second-place chap is the 2014 Nissan GT-R Track Edition, a car that needed 2.7 seconds. So, Aventador, McLaren 12C, any Ferrari, you name it -- other than Bugatti -- to 60 mph the Turbo S is more rapid. The quarter-mile is a different story, as the 991 Turbo S runs exactly the same as the car it replaces: 10.9 seconds. That's even with all that extra power and torque and only a modest 49-pound weight increase. The trap speeds are even more telling, with the 997 version trapping at 127.4 mph compared to only 123.7 mph for the new car. What gives? Honestly, we don't know. You might think tires (Bridgestone Potenza RE050As for the old car and Pirelli P Zeros for the new one), but the 991 beats the 997 by a tenth of a second to 60 mph, so it's probably not traction. The power peak of the 991 is even higher (6500 versus 6250 for the 997) so we really can't say. Either way, the 911 Turbo S is the fourth-quickest production car we've ever tested (behind the Veyron, Aventador, and McLaren MP4-12C).
Where does all this leave us? For $199,065, the 2014 Porsche 911 Turbo S is one hell of a (modestly optioned) car. It's swathed in enough leather to make it a legitimate grand tourer, yet comes packing enough gumption that it remains one of the best-performing supercars money can buy. It's brutal, yet great to drive, as well as luxurious and sexy in that Germanic way. You get all the goodness found in the 911 Carrera S, now complete with one of the mightiest engines found anywhere on earth. If there's a fault, it's that the new Turbo S isn't that huge of a leap forward performance-wise compared to the last Turbo S. However, in terms of looks, comfort, and everyday drivability/livability, it's a whole new animal.