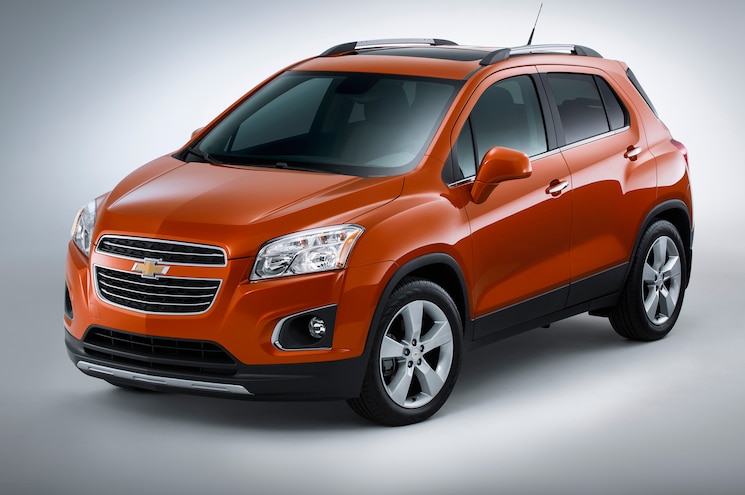 Although there are only a few subcompact crossovers currently on sale in America, the segment is expected to grow significantly over the next few years. GM hopes the 2015 Chevrolet Trax will give the automaker an early boost in the segment. We got a chance to take a Canadian-market Trax for a quick drive around the winding roads outside of Monticello, New York, just ahead of its official reveal during the 2014 New York International Auto Show.
Based on GM's Gamma II global small-car platform (Buick Encore and Chevrolet Sonic and Spark), the 2015 Chevrolet Trax is powered by the same 1.4-liter turbocharged I-4 and six-speed automatic as the Chevrolet Sonic (and Buick Encore and Chevrolet Cruze). Front-drive is standard, while all-wheel drive is available. With just 138 hp and 148 lb-ft of torque, the Trax LTZ AWD isn't fast, but the power did feel adequate for its manufacturer-estimated 3208-pound curb weight. (Front-drive Trax models weigh 2805 pounds.) 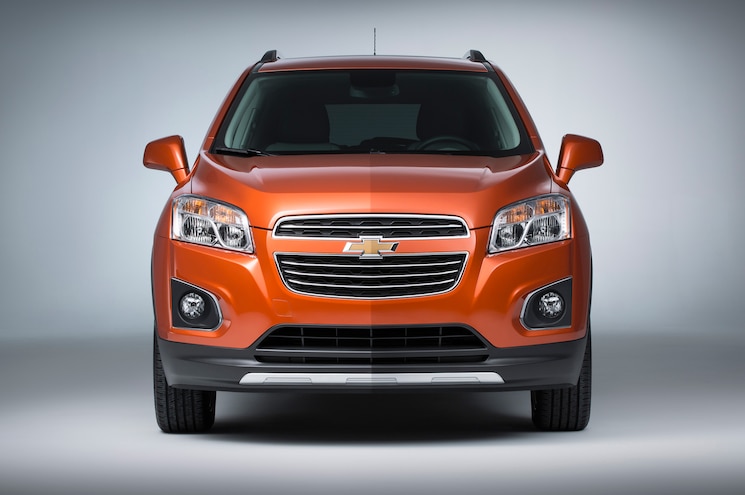 View Photo Gallery | 30 Photos
Photo 2/30   |   2015 Chevrolet Trax Front View
Our drive route wound up, down, and around the narrow tree-lined roads through the hills outside of Monticello. Although the Trax tackled everything we threw at it, the 1.4-liter turbo sounded a bit strained at higher engine revs on some of the steeper sections of the route. While the transmission can be shifted manually, a sport mode or hill mode would be a welcome addition to the gearbox. With all-wheel drive, the Trax LTZ handled the twistier parts of the drive at above reasonable speeds without complaint – even during a downpour.

Read about the mechanically related Buick Encore in the Motor Trend First Drive HERE.
While we didn't get a chance to test the Trax, the last Sonic LTZ with 1.4-liter and six-speed manual we tested reached 60 mph in 8.1 seconds. That model weighed 2794 pounds. We expect the heavier front-drive Trax with automatic to be slightly slower, and the all-wheel-drive model slower still. In comparison, the 188-hp and 177 lb-ft Nissan Juke AWD with CVT and the Kia Soul reached 60 mph in 7.3 seconds and 8.4 seconds, respectively, while the 148-hp and 145 lb-ft Mitsubishi Outlander Sport took 9.7 seconds to reach 60 mph. Chevrolet cites those models as the Trax's key competitors. 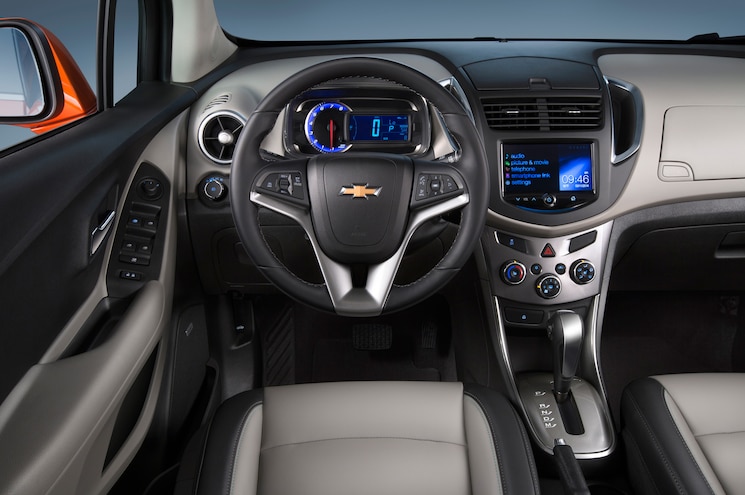 View Photo Gallery | 30 Photos
Photo 6/30   |   2015 Chevrolet Trax Interior
With a more efficient interior packaging, the Trax is much more practical than the funky-looking Juke, which places style over function.
Inside, the Trax cribs many styling cues from the Sonic, including the motorcycle-inspired gauge cluster with large analog tachometer and large digital speedometer, and dashboard design and center stack with 7-inch touch screen and climate controls. Even the Trax steering wheel even comes from the Sonic, though the two small cubby holes that frame the infotainment screen and center climate vents aren't as deep as those on the Sonic.
Although the subcompact crossover segment is just gaining traction, Chevrolet has entered the segment with a solid contender. Stay tuned for when we get a chance to put the Trax through Motor Trend's standard battery of tests.