Here's Hoping It's the Little Things 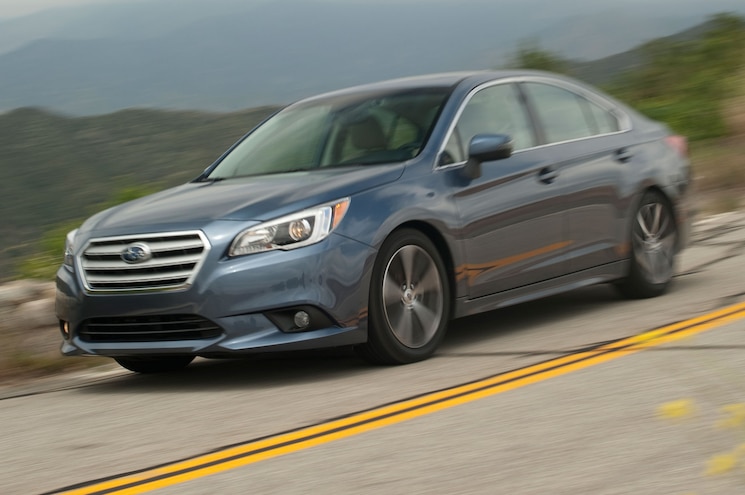 Squishier armrests. In the grand scheme of things, the single most important selling point of the new, sixth-generation Subaru Legacy could just be its noticeably more comfortable armrests. Great padding abounds, both on the doors and the center armrest. You might be shaking your head and/or laughing at this point, but hear me out. If you're going to take on King Camry or its heir apparent, Prince Accord, you need to stand out. Remember that Toyota sold nearly as many Camrys last year (408K) as Subaru sold Subarus (424K). For its part, Honda moved nearly 367K Accords. Subaru? Just more than 42,000 Legacys. Hence, the Legacy sports the best armrests this side of a Rolls-Royce Phantom because it had to do something. Any little chink in the Camry's armor will do. As for the rest of the car…
The first way the new Legacy separates itself from the cars it competes against – Camry, Accord, Fusion, Malibu, Sonata, Optima, Passat, Altima, Mazda6, Chrysler 200 – is its standard AWD. From the moment you roll on the throttle mid-corner, the lack of torque steer reminds you the Legacy is no front-driver. Combine that with the much better-than-average steering, and my initial reaction was, "Hey, this is like a big WRX!" Fast -forward a few days and I expressed that opinion to our race car-driving buddy Randy Pobst as he used the Legacy 2.5i to dust off the Streets off the Willow before some sportier cars got on track. "There's some WRX dirt in there somewhere," Randy said. "But this is much more luxurious. More like a WRX Town Car." What, you don't take your Camry to the track? The Ford Fusion and Chrysler 200 are also available with AWD, but it's optional, and only available with the more expensive powertrains. We know that people in the northeast love AWD when it comes to RWD sedans. Just ask Jaguar, whose XF and XJ have doubled sales since AWD became an option. Sad to say for Subaru, buyers of FWD midsize sedans don't seem to care. 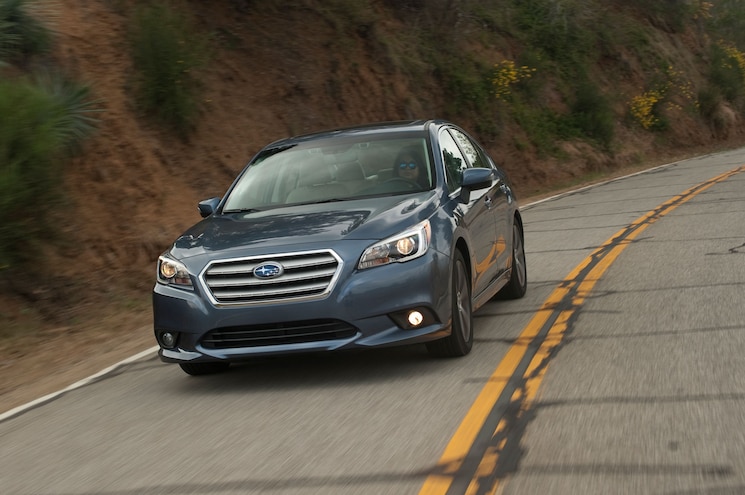 View Photo Gallery | 165 Photos
Photo 2/165   |   2015 Subaru Legacy 25i Limited Front View Around Corner
Randy and I both feel that the Legacy's CVT is pretty dang good. Considering that a continuously variable faux-cog swapper is now the only transmission available on either the 2.5-liter boxer-four or the 3.6-liter boxer-six, it had better be. To be totally forthcoming, the Legacy launches with two CVTs -- the regular one you'll find in the Impreza and XV Crosstrek for the 2.5i, and something called an HCVT (high torque CVT) for the 3.6. Both are quiet, refined and (most important) almost able to convince you that they're not CVTs. But there are two giveaways. One is that because there's no torque converter, there's no way to smoothly pull away from a dead stop. Even a light throttle application tosses you -- and more likely your passengers -- back in their seats. The second is something Randy noticed: Since gears aren't being swapped and instead are being varied, the gears sound like they're sliding. Like a trombone. Not bad, necessarily, but weird if you know to listen for it. And now you know.
Straight-line speed isn't the métier of the family schlepper, but we tested the Legacy 2.5i anyhow. With a relatively beefy naturally aspirated four-cylinder pumping out 175 horsepower and 173 lb-ft of torque, 0-60 happens in 8.8 seconds, while 16.7 seconds are needed for the quarter-mile at 84.9 mph. Those numbers are solidly in the "meh" zone, but whaddaya expect from a non-turbo four-banger? The Legacy also ran our figure-eight test in 27.6 seconds at 0.60 average g, and hit 0.83 lateral g average, and no doubt helped by the Legacy's AWD traction. We were only able to test the four-cylinder Legacy, but I can tell you that on the street the 256-hp, 247 lb-ft 3.6 doesn't feel a whole lot faster. When we test it, we'll find out and let you know, but driving both cars on the same roads back to back left me scratching my head as to why anyone would bother with the heavier, thirstier, and costlier six-cylinder. Now if the Legacy 3.6 were in fact a sportier car (like the Forester XT is when compared with the regular-flavor Forester), with Sport and Sport# modes, different suspension, sportier transmission, and different steering – I could recommend it. But since it's just a little bit more powerful, I'm going to advise you save your pennies and go for the 2.5i. The only numbers you'll really notice are the miles per gallon: 26/36/30 mpg for the four-banger and 20/29/23 for the big six. 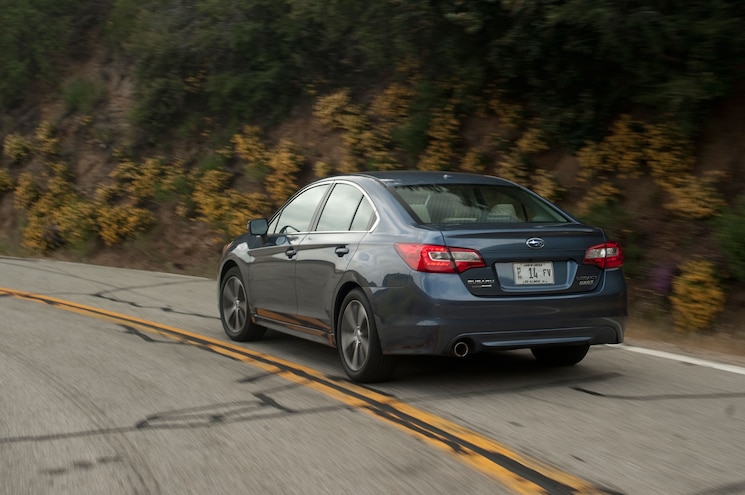 View Photo Gallery | 165 Photos
Photo 9/165   |   2015 Subaru Legacy 25i Limited Rear Side View In Motion
Safety is a big concern for buyers in this segment, and the new Legacy is doing its utmost to keep drivers out of accidents. Subaru's unique (at this price point) EyeSight is improved and available on lower-trim models. EyeSight uses stereo cameras for adaptive cruise control, lane-keeping assist, and collision warning/prevention. This new version uses smaller cameras (they still look weird) that have a 40 percent greater range, and it now features Lead Vehicle Alert, which warns you when the car you're following activates its brake lights. Separate from EyeSight are two radar sensors located on the sides of the trunk. that allow for blind-spot monitoring, lane-change assist and rear cross-traffic alert. None of those last three are unique (Fusion has them all, for instance), but combined with EyeSight, the Legacy makes a pretty compelling safety argument. Even if the lane-keeping assist is seven kinds of annoying on California's Highway 1 between Big Sur and Santa Cruz. Yes, you can shut it off. But still. Also, the optional radar sensors are not tied to EyeSight, so you can have one without the other. Most important, Subaru's claiming/hoping the Legacy will be a Top Safety Pick Plus, even though it hasn't been crash-tested yet. Stay tuned.
Aside from the squishy armrests, there are two other things you should know about the new Legacy's cabin. One is that the fake wood is second to none. It's gorgeous. As Subaru boasted, "We have the best fake tree forests in the industry." The second is that there suddenly exists a Subaru featuring a navigation and infotainment system that isn't automatically the worst in the segment/industry. I'd go so far as to call it pretty good. Our test car had the larger, 7-inch touch screen. A smaller, less feature-rich 6.2-inch screen comes standard. The larger screen is legible, intuitive, and functional. Perfect? Hardly. My big gripe is that sometimes the map refuses to zoom in or out, but I can chalk that up to preproduction jitters. For now.
Subaru has modest, yet substantial goals for the Legacy. Currently and together, Camry and Accord control nearly 30 percent of the midsize sedan segment. The Legacy is sitting at just more than 1 percent. Subaru would like to double that number. It's going to have to take a bite out of the big dogs to move about 80,000 units. The good news is that the new Legacy is strong enough to accomplish that. The bad news is so is the Mazda6, and it also commands about 1 percent of the market. Worse, the new, improved Camry is due out soon, and its armrests may very well be stuffed with duck fat. Good luck, guys.