Born in Japan, With an American Accent

Starting with the 2014 model year, Infiniti instituted a top-down name change of nearly all its models, with the previous Letters of "M," "G," or whatever else being replaced by "Q" or "QX" depending on if it was a car or SUV, and the numerology formerly referring to engine displacement changing to the model's relative hierarchy within the brand. Hence, the JX35 became the QX60, the FX37 became the QX70, and the jumbo QX56 became the QX80. So if this 2014 Infiniti QX80 looks familiar, it's because it's essentially the same model we've seen since the 2011 model year, when the Nissan Armada-based model was replaced with a smoother, rounder, more-sophisticated, and more-refined model based on the global fullsize Nissan Patrol.
The 2011 model was a major improvement over the plasticky, uninspired, not-particularly-premium feeling Armada-based model, giving Infiniti a legitimately premium-feeling large SUV. Although from a distance, the new model looks trimmer and smaller than its more angular predecessor, it is in fact wider and longer, although fractionally lower. On paper, the QX80's specs make it competitive with other vehicles in its class like the Mercedes-Benz GL, Lexus LX570, and its domestic rivals, the Cadillac Escalade and Lincoln Navigator. 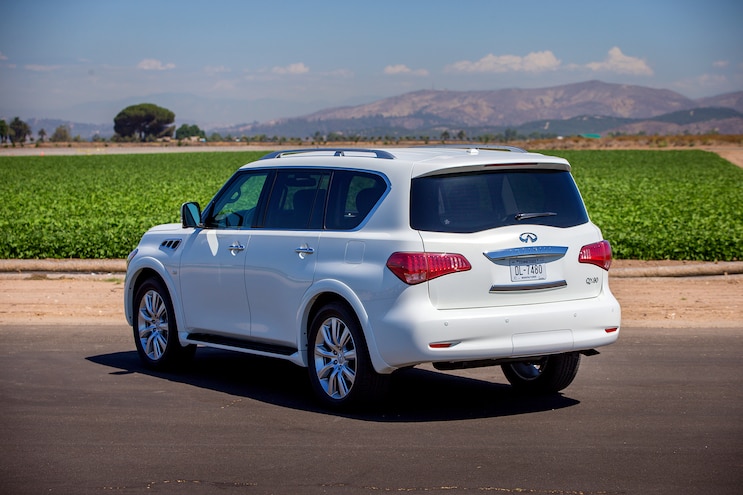 View Photo Gallery | 8 Photos
Photo 2/8   |   2014 Infiniti QX80 Rear Driver Side
American Heart
Although built in Nissan's Yukuhashi, Japan plant alongside the global Patrol, its engine is bolted together in Decherd, Tennessee, so this sumo-sized SUV beats with an American heart, and the engine is a large part of the QX80's personality. The VK56VD 5.6L direct-injected 32-valve DOHC V-8 is a more powerful evolution of the Armada and Titan's VK56DE. Producing 400 hp and 413 lb-ft of torque, the engine, working in conjunction with a seven-speed automatic, moves the Infiniti QX80 with authority, if not lightning-quick alacrity. Throttle response is deliberately gradual just off the line, requiring a deeper dip of the right foot to get things moving. But if you lay into it more, the engine's ample torque wafts the QX80 down the road with confidence, accompanied by an appropriately muted V-8 burble. Our 0-60 time of 6.3 Seconds was slightly slower than the 6.1-second performance we recorded on the 2011 Infiniti QX56, as was its quarter-mile time of 14.9 at 93.6 mph. That said, you could hardly call the QX80 underpowered.
The QX80's standard 22-inch wheels and tires look just as gargantuan as you'd expect, but the big SUV's ride is surprisingly more compliant than you might expect. However, the flipside to the comfortable ride is plenty of body roll in the corners. It will hang on through the twisties if pushed but makes clear it prefers relaxed cruising and straight-ahead driving. As you would expect of a fullsize luxury SUV, the QX80 is most at home on the open highway, with its broad, comfortable front buckets and center captain's chairs offering ample room and comfort. 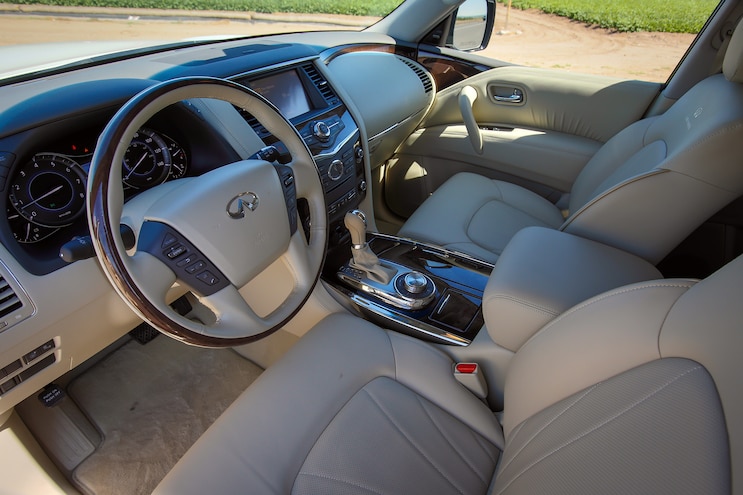 View Photo Gallery | 8 Photos
Photo 6/8   |   2014 Infiniti QX80 Dash
Third-row accommodations, with its limited knee and foot room, are not quite as lavish and are probably best left to pre-teens. Although the QX80 has most of the usual expected niceties of heated and cooled front seats, navigation, memory seats and mirrors, and of course, available rear-passenger DVD screens, there were a few curious omissions from our tester. It didn't appear to have HD Radio, although we've been in some other vehicles where it's enabled or disabled by a setting in the configurations menu. But this minor oversight doesn't detract from the QX80's overall relaxed, premium, and comfortable style and generous equipment level.
Alternative to Mainstream
We don't see the QX80 as a direct competitor to the Range Rover, Mercedes-Benz GL, or even the Lexus LX. In size, purpose and personality, it's most similar to the Navigator and Escalade. Its smooth, ample V-8 power, chrome-laden styling, and stretch-out accommodations give it a personality most similar to the domestics. For those that want that class of vehicle, but find the Escalade or Navigator too common as either livery fleet vehicles or just don't want to see themselves at every other intersection, the QX80 offers much of the same experience with a helping of upscale Japanese style.
With the new 2015 Cadillac Escalade stickering at more than $90,000 for a well-equipped example, and the Navigator now well into the $70,000+ range, our tester's $79,095 sticker doesn't seem as outrageous as it once might have, especially in the context of the pricing of the Lexus LX and fully optioned Range Rovers and Mercedes GL models going for well over six figures. Average household incomes for this class of vehicles is well above the national average, and for many, $20-30,000 one way or another isn't a deciding factor. But if both the Navigator and Escalade are on your shopping list, consider adding the Infiniti QX80 on there as well. You may find it comfortably familiar, yet just different enough. 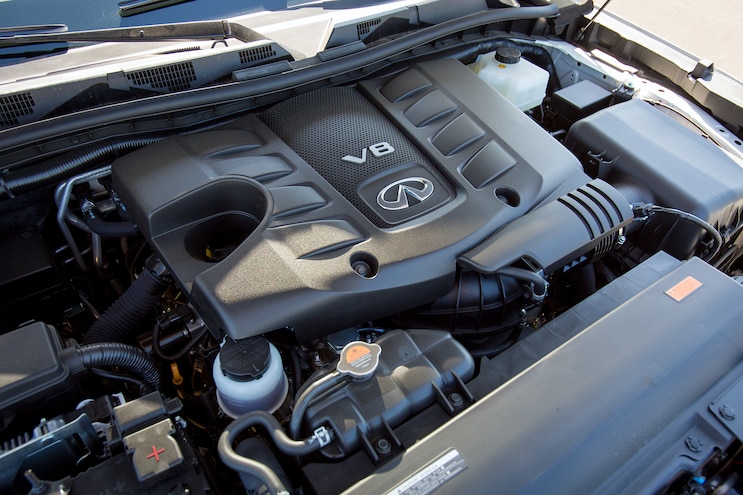 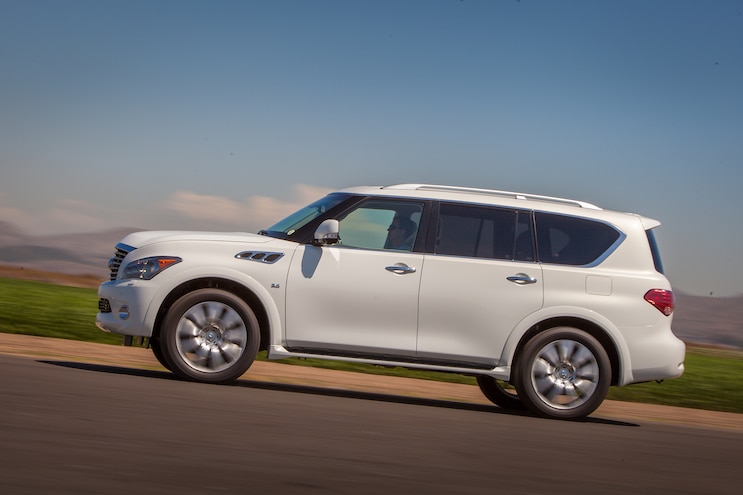