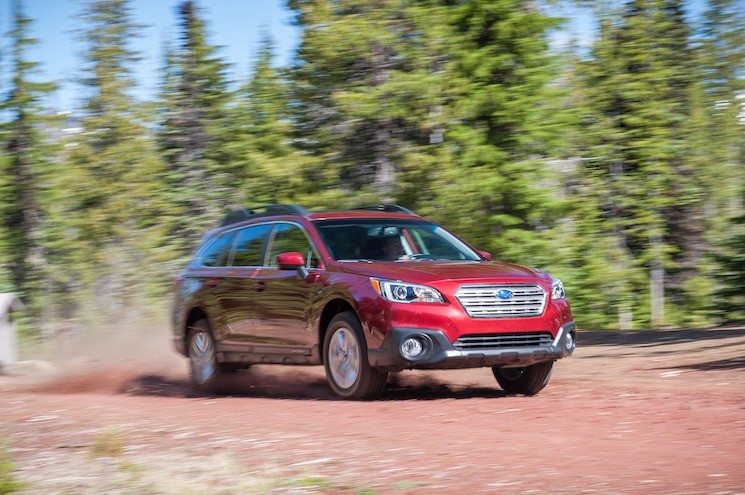 Haven't we been here before? Like its SUV of the Year-winning predecessor, the 2015 Subaru Outback lacks the flash of its competitors, but just works well. The two-row midsize crossover is bigger and more efficient than before, offering smart features you can't find on some of its competitors. While far from perfect, the 2015 Subaru Outback is an intriguing mix of function and technology that's going to make Subaru customers a whole lot happier.
The improved package starts with better styling. As with the mechanically related Legacy midsize sedan, the 2015 Subaru Outback has been blessed with a smoother front design that's far less awkward than the outgoing crossover. And for better or for worse, the black cladding that's defined the Outback for generations has been minimized on this new model. You can't help but notice the crossover's wagon roots, but some might find the Outback's slightly different proportions appealing, as conventional midsize SUV designs try to out-flash one another. You still step up a little to get into the Outback, though its competitors might offer a more commanding view of the road. 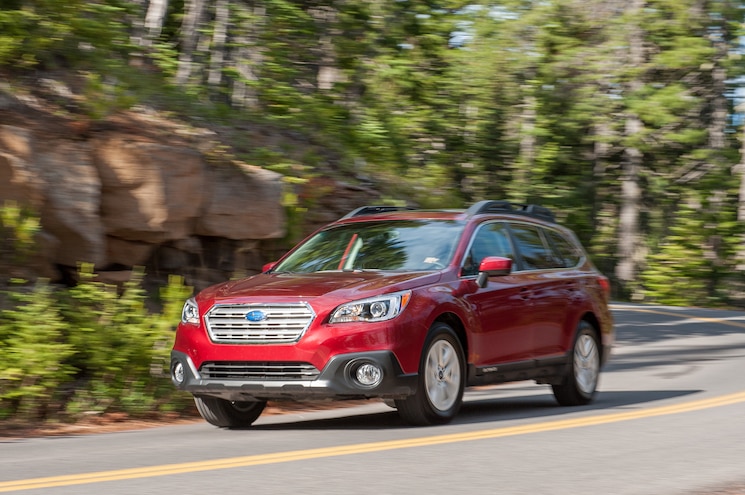 View Photo Gallery | 164 Photos
Photo 2/164   |   2015 Subaru Outback 25i Front Three Quarter In Motion
Those few midsize crossover customers who will actually venture off-road should place the 2015 Subaru Outback on their shopping lists. Every Outback from the $25,745 base four-cylinder model (add $300 if you're in a state with F-4 PZEV models) to the fully loaded $36,835 3.6R Limited has standard all-wheel drive with X-Mode and Hill Descent Control -- a fancy way of saying the crossover will do its best to make you look like a hero when getting to your outdoorsy activity spot requires traversing an off-road trail. Outback owners are more likely than many other SUV owners to actually go off-road, Subaru claims, and the new X-Mode -- a simple button on the center console -- should really help those adventure-seeking buyers.
Even active-lifestyle types will spend most of their time on pavement -- in cities, on winding roads, and on highways -- but the Outback is solid here too. More than 80 percent of all Outbacks are expected to be sold with the 2.5i model's flat-four under the hood. Producing 175 hp at 5800 rpm and 174 lb-ft of torque at 4000 rpm, the 2.5-liter flat-four is mated exclusively to a CVT with paddle shifters. Get aggressive with the throttle and the CVT does its best impression of a traditional automatic transmission, simulating gear shifts in a way you'll hear and feel. Not surprisingly, the four-cylinder isn't much to listen to, but engine noise is, for the most part, kept out of the cabin. The 2015 Outback 2.5i feels sluggish from behind the wheel, though the manufacturer-estimated 0-60 mph time of 9.3 seconds is a bit quicker than our 2010 Outback 2.5i long-termer, which finished the sprint in a Motor Trend-tested 9.7 seconds. 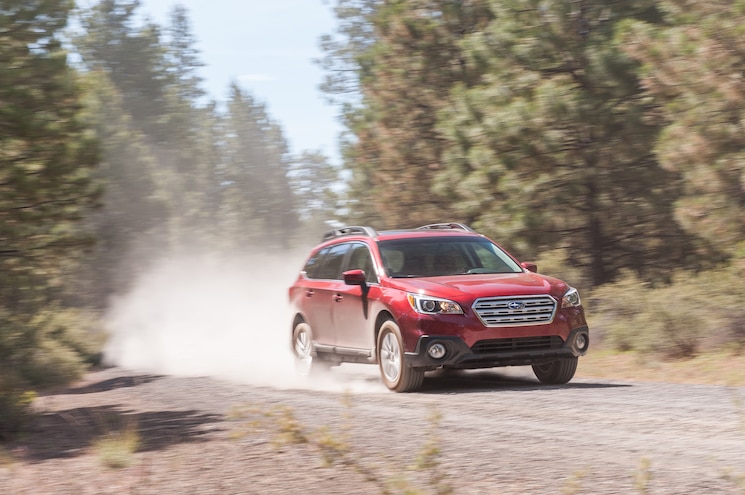 View Photo Gallery | 164 Photos
Photo 6/164   |   2015 Subaru Outback 25i Front Three Quarter In Motion 06
That last-gen Outback didn't get the mileage of the 2015 model, at an EPA-rated 25/33 mpg city/highway, and the outgoing six-cylinder model doesn't come close to the 2015 Outback 3.6R's 20/27 mpg, either. The flat-six engine is good for 256 hp at 6000 rpm and 247 lb-ft at 4400 rpm. Both models deliver a decent ride on pavement, leaning a little in turns. Claimed to be 2 seconds quicker to 60 mph than the 2.5i model, the six sounds stronger, but we wouldn't mind a bit more power for this upgrade engine. Though the throttle of the 2.5i and 3.6R is a bit touchy, a gradual change of driving style could eliminate that minor issue. With just 13 percent of all Outbacks set to have six cylinders under the hood, Subaru has limited the model to a $3000 upgrade above the top-of-the-line 2.5i Limited trim. Going for the 3.6R is also the only way you can get HID headlights on an Outback. 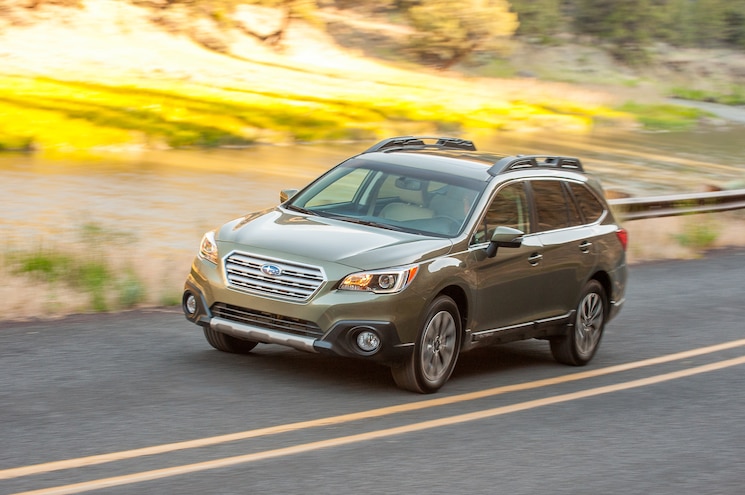 View Photo Gallery | 164 Photos
Photo 16/164   |   2015 Subaru Outback 36R Front Three Quarter In Motion 07
What's not being restricted to top-trim levels anymore is Subaru's EyeSight system of active safety features. Subaru has developed a reputation of scoring high in NHTSA and IIHS safety tests, and EyeSight could help inattentive drivers keep their Outbacks damage-free. Using two stereo cameras at the top of the windshield that are 15 percent smaller than those in the last version of EyeSight, the vehicle can audibly and visually warn you of obstacles ahead and, if absolutely necessary, bring you to a complete stop with more braking force than you'd expect. EyeSight, which is expected to be part of about 30 percent of Outbacks in 2015, also includes lane departure warning and adaptive cruise control systems, while steering-responsive foglights (pre-aimed, not pivoting) are included, as well. The power rear liftgate can be programmed to open to different heights, and a pin code access system can allow Outback owners to leave keys in the crossover while they run/kayak/bike/etc. 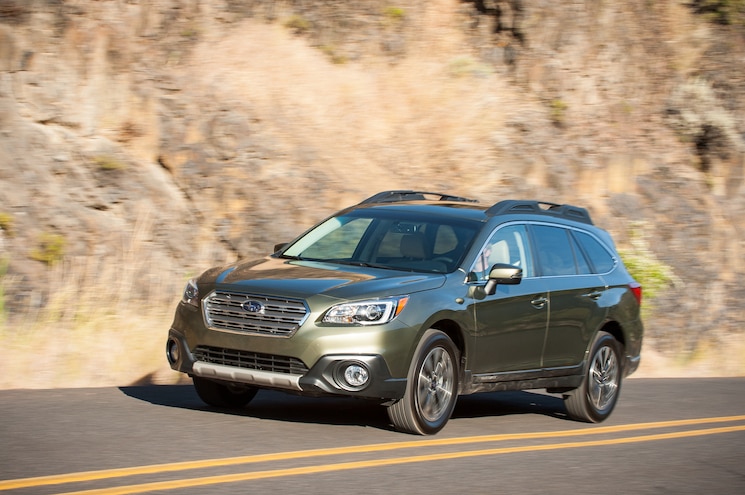 View Photo Gallery | 164 Photos
Photo 23/164   |   2015 Subaru Outback 36R Front Three Quarter In Motion 05
Where the 2015 Subaru Outback makes some of its biggest strides forward is inside. The available faux wood trim looks great, as does the dark, textured trim on the center console. An instrument cluster display screen shows plenty of helpful info (including navigation directions), while a cellphone holder just ahead of the central cupholders is a great idea. Oh, and maybe you've heard: The Outback and Legacy have some of the squishiest armrests around. Infotainment options include 6.2-inch and 7.0-inch touchscreen systems that work well, but could be mounted a bit higher in the center stack. Interior space is very comfortable for four, with plenty of headroom and legroom for all, plus rear seats that recline and fold easily. On the outside, you'll find retractable crossbars and tie-downs integrated in the roof rails -- a practical idea you won't find on just any CUV.
The Outback is a well-rounded crossover, and although you won't find a panoramic moonroof, ventilated seats, or power-folding sideview mirrors on the options list, this fifth-generation model borrows from a formula that worked so well, it was our 2010 SUV of the year. Will the 2015 Outback follow in its predecessor's tire tracks? We're looking forward to finding out.