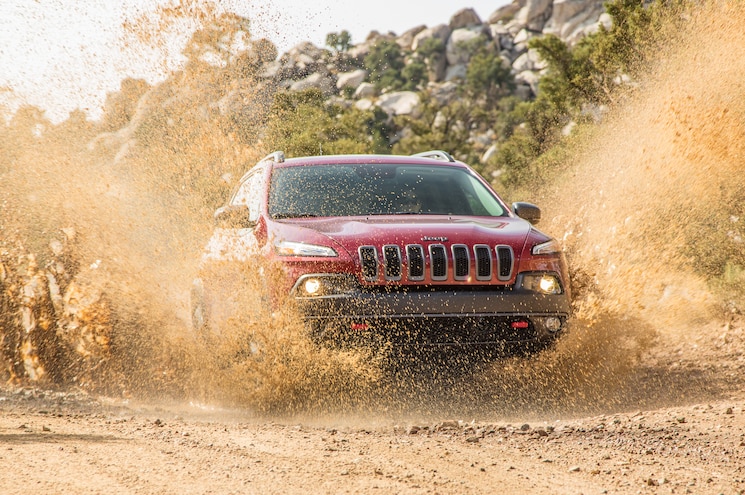 If we were to nominate a single automotive brand for “most interesting brand in the world,” Jeep would be one of the finalists. Certainly, it doesn’t have the exclusive mystique of such marques as Lamborghini, Ferrari, or even Land Rover, but few other brands are as simultaneously bound to tradition yet constantly pushing the envelope of design and innovation. The 2014 Jeep Cherokee, especially in Trailhawk guise, embodies this paradox better than just about any other model in the brand’s lineup.
When the first spyshots hit the web with the LED eyebrows, rounded nose, and unusually placed headlights, Jeep traditionalists were instantly up in arms about the heresy and bastardization Jeep’s new Italian overlords were imposing upon it. While we weren’t quite ready to grab our torches and pitchforks, we must admit we had mixed feelings about the styling direction of the new Cherokee. Add to that the fact that the Cherokee was yet another Jeep with a transverse drivetrain, a dubious distinction shared with the less-than-stellar Compass and Patriot, not exactly the brightest stars of the Jeep lineup. 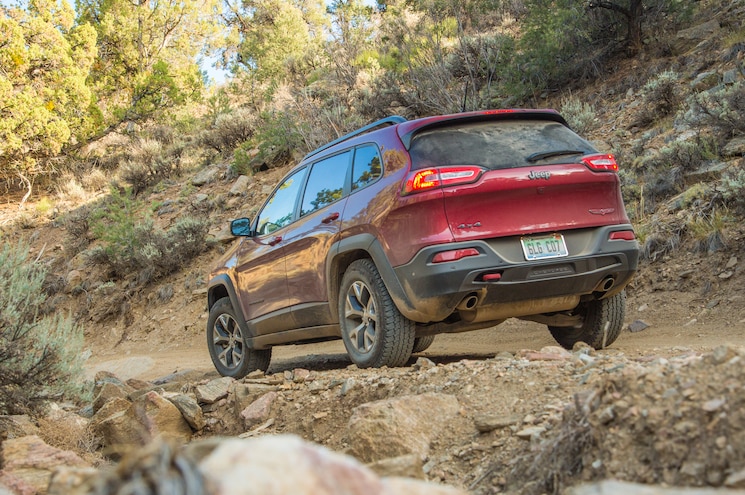 View Photo Gallery | 20 Photos
Photo 2/20   |   2014 Jeep Cherokee Trailhawk Rear View
But let’s be realistic. Not every model Jeep sells can be a Wrangler, although the original SUV remains one of its strongest sellers. All but the most hard-core Jeepers would consider the Grand Cherokee a legitimate Jeep, notwithstanding its unibody construction and four-wheel independent suspension. What the Cherokee accomplishes is giving Jeep a legitimate, competitive entry into the white-hot center of the crossover segment, offering the practicality, features, and efficiency expected in that class, while retaining the off-road capability expected from the brand.
Low Range: Check
When details started to emerge about the Liberty’s successor (before we even knew it would be named “Cherokee”) being based on the Alfa Romeo Giulietta, the first item we feared would be on the chopping block was low-range four-wheel drive. After all, we couldn’t think of any other transverse-powertrain crossovers that offered a low range. To our surprise and delight, Jeep managed to engineer an innovative low-range system that manages to package the brand’s legendary billy goat off-road capability under a car-based chassis. We’ve been off-road in a Trailhawk on inclines, descents, and surfaces that were legitimately pucker-worthy, at least for those not born and raised in a CJ or Wrangler. The Trailhawk does a good job of making rookies feel like heroes—and preventing off-roading veterans from getting terminally bored.
But few of the Cherokee’s target customers will take advantage of all its off-road capabilities. To succeed against such mainstream rivals as the Ford Escape, Honda CR-V, and Toyota RAV4, it needs the refinement, features, and fuel economy those buyers are seeking. In those areas, the Cherokee is surprisingly competent. Engine, road, and wind noise are all appropriately muted, but not completely strangled. Even with the tires’ visually aggressive tread pattern, road noise is not at all objectionable, and the ride quality, though firm, is controlled and comfortable. The 271-hp 3.2L Pentastar V-6 delivers ample power to motivate the Cherokee’s chunky 2-ton-plus weight, returning a respectable but not scorching 7.6-second 0-60 run. 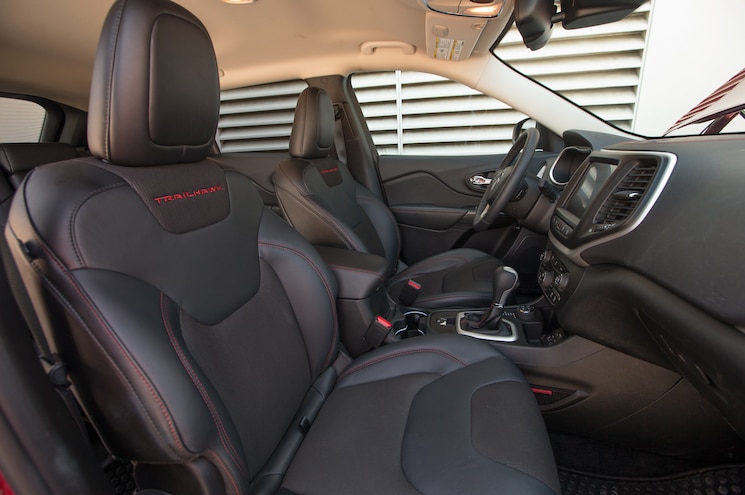 View Photo Gallery | 20 Photos
Photo 6/20   |   2014 Jeep Cherokee Trailhawk Front Seats
Transmission: Work in Progress
Much has been written and reported about the Cherokee’s nine-speed automatic transmission and the issues Chrysler has had in calibrating it to its satisfaction. While we’d love to report that its performance is flawless, as has been our experience with Chrysler’s outstanding TorqueFlite 8 eight-speed automatic in its rear-drive models, we feel the 948TE could still use a little more time in the oven. In most situations, the transmission goes about its function unobtrusively and doesn’t draw undue attention to itself. But during transitional situations such as accelerating moderately out of a corner, the transmission is sometimes caught flat-footed, feeling bogged down, and requiring a swift stab of the go pedal. Then the tach swings to 5,000 rpm, delivering the power you expected in the first place. We thought selecting Sport mode would remedy this sluggishness and indifference, but it went too far in the other direction by holding gears up to 3,000 to 4,000 rpm before shifting. Dialing in a little better responsiveness to downshift at part throttle would help the overall quality of the driving experience.
Customers in the crossover class have come to expect contemporary tech integration and, like many other newer Chrysler products, the Cherokee brings its A-game with the Uconnect interface with a large 8-inch screen, easy-to-understand icons and functions, and no-fuss pairing with cell phones. In keeping with the practicality expected in mainstream crossovers, the Cherokee has a surprisingly roomy storage compartment hidden under the front passenger seat. Cargo space is acceptable but trails the segment leaders CR-V and RAV4 in overall volume. 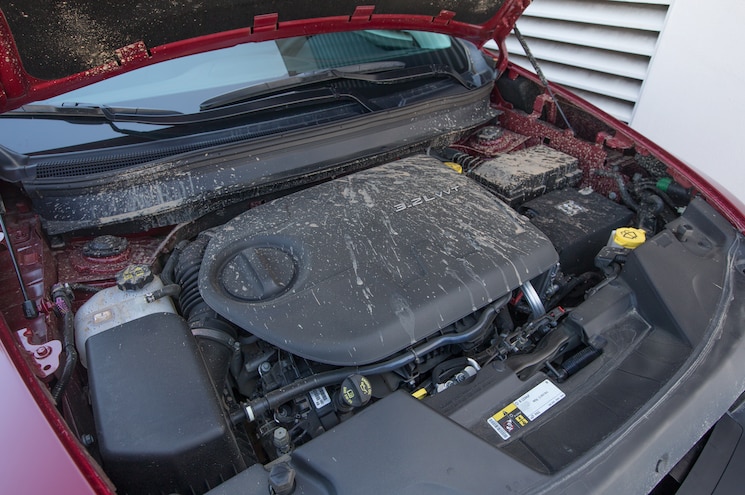 View Photo Gallery | 20 Photos
Photo 13/20   |   2014 Jeep Cherokee Trailhawk Engine
Crossing Over without Blending In
From a purely objective standpoint, the Cherokee doesn’t stand out as a class leader in any single area. There are more fuel-efficient, roomy, and lower-priced models available. And if you evaluate your purchase of a new vehicle strictly by virtue of a spec chart, projected resale value, and initial quality surveys, the Cherokee lands mid-pack. But if you have a little more of an individualistic streak, the Cherokee has much to offer. Its styling—love it or hate it—is certainly anything but mainstream. And it’s safe to say in terms of off-road capability in the compact/midsize crossover class, the Cherokee Trailhawk is without peer. The Trailhawk’s styling details also manage to make it look rugged enough to not be emasculating, with most compact crossovers having arguably wrested the “mommy-mobile” crown from minivans a few years ago.
If life or family circumstances necessitate a small crossover but you can’t quite stomach the thought of an Escape, RAV4, or CR-V, the Cherokee is a unique alternative that provides most of the practicality expected for the class, but with a generous dash of style, attitude, and capability. 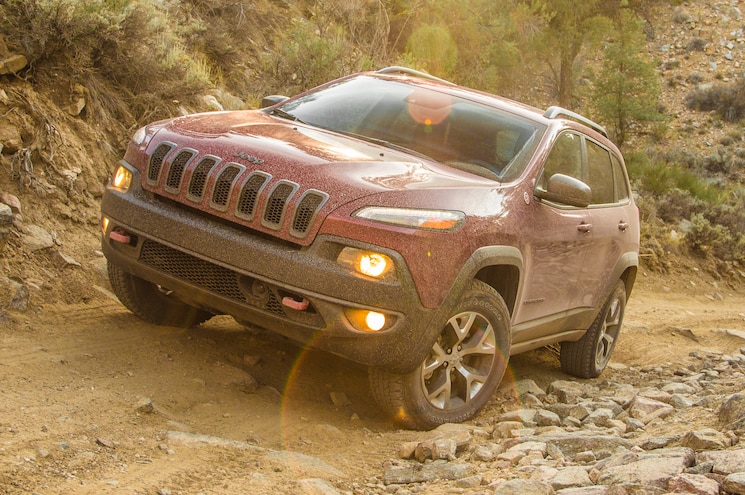