Back Out on the Track With Subaru's Wagonoid CUV 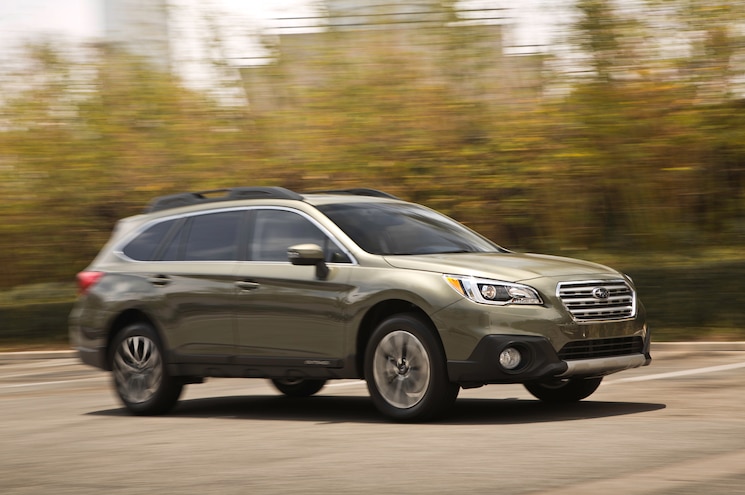 2015 Subaru Outback 2.5i owners pay attention to track-tested performance data as much as BRZ sports car owners worry about rear-seat headroom -- it just doesn't happen. Owners of the new 2015 Outback will appreciate what they think the new wagon-like crossover, with its nifty retractable crossbars and integrated tie-downs, says about them. While the Outback boasts a reputation for actually being used for outdoorsy pursuits, nearly every off-road adventure ends on pavement, so we headed to the track to explore how the 2015 model compares to our long-gone 2010 Outback long-termer. Does the new Outback 2.5i reward drivers with sports-car acceleration? Not even close, but it is markedly improved over its predecessor, a versatile crossover that won our hearts to become the 2010 SUV of the Year.
Matched against its predecessor, the all-wheel-drive 2015 Outback 2.5i is quicker, bigger, a better handler, and heavier, all at the same time. Let's start with the new Subaru's quickness: 0-60 mph in 9.2 seconds doesn't sound swift, but it's actually half a second better than our 2010 Outback long-termer. That 9.2-second time also puts the new Outback ahead of the 2014 Kia Sorento I-4 AWD (9.8 seconds) and just behind the mechanically related all-wheel-drive 2015 Subaru Legacy 2.5i sedan (8.8 seconds). With 87 percent of all Outbacks powered by the four-cylinder instead of the flat-six, the Subaru's slow-ish acceleration is just fine for those who aren't interested in the six-cylinder Outback 3.6R's $33,845 base price. EPA-rated fuel economy is a bright spot, with the 2015 model's 25/33 mpg city/highway boosted above the 2014 2.5i model's 24/30 mpg. After a Real MPG instrumented fuel economy test of our own, the 2015 Outback 2.5i came in at 21.5/30.8 mpg. That's below EPA estimates, but still higher than the all-wheel-drive 2014 Nissan Rogue, which has a similar 25/32 mpg EPA rating and 20.1/28.2 Real MPG. 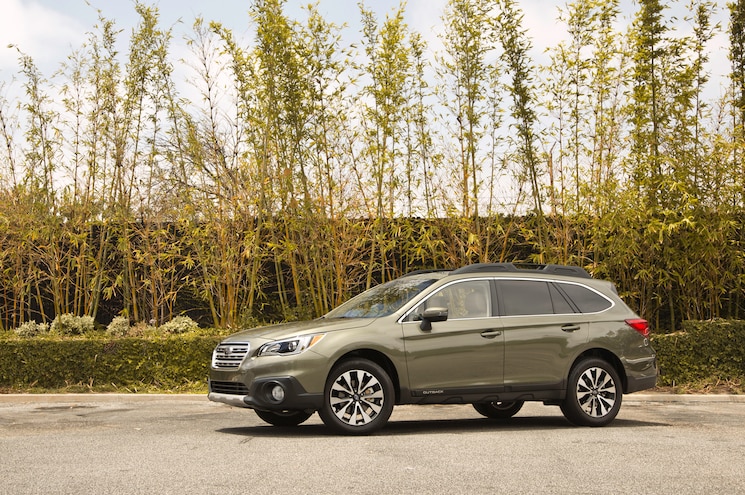 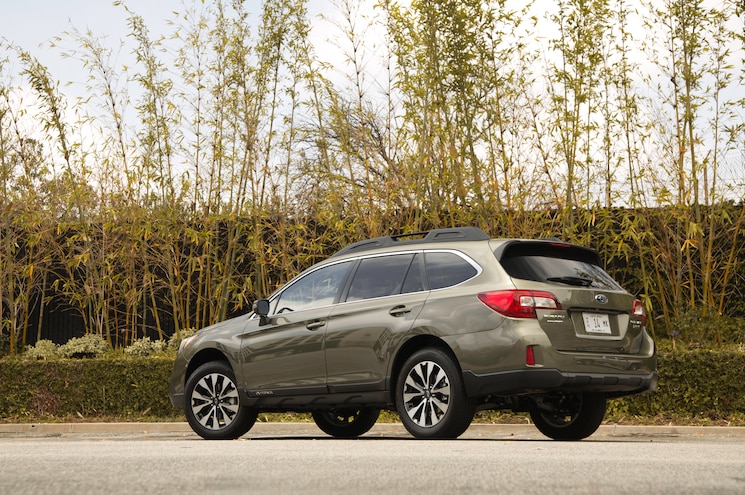 View Photo Gallery | 189 Photos
Photo 6/189   |   2015 Subaru Outback 25 Limited Rear Three Quarters
Paired with a standard CVT, the 2015 Outback 2.5i doesn't feel as slow as the 2010 model. Yes, you'll hear a bit of engine noise, but it's not that bad on the highway. Most of the time, the transmission provides a smooth driving experience, though at wide-open throttle the crossover mimics a traditional six-speed automatic transmission. Lead-footed drivers might have difficulties adjusting to the touchy throttle tip-in, a minor issue we've also noted in the 2015 Legacy 2.5i and 2014 Forester 2.5i. Around the figure-eight course, the 2015 Outback 2.5i put in a time of 26.3 seconds at 0.63 g (average), a noticeable improvement over the 2010 Outback's 29.1 seconds at 0.56 g (average). That doesn't mean the Outback 2.5i is an optimal winding-road partner, but with its well-tuned steering, it will hold its own as well as any 3702-pound crossover can. Braking from 60-0 mph takes 120 feet -- 12 feet longer than the lighter 2015 Legacy 2.5i and 9 feet shorter than the 2010 Outback 2.5i long-termer. 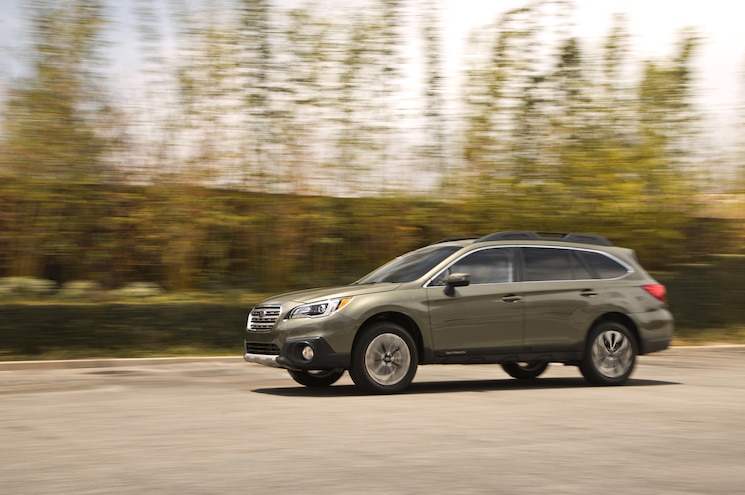 View Photo Gallery | 189 Photos
Photo 7/189   |   2015 Subaru Outback 25 Limited Side In Motion
Some buyers will insist on going for the six-cylinder 3.6R model, but it won't be for the extra towing capacity. The 2.5i model is rated at 2700 pounds (with a 200-pound trailer tongue weight), while the 3.6R adds another 300 pounds of capacity. On the road, the six-cylinder Outback definitely feels stronger than the 2.5i model, but it takes a few beats to get going. The 2.5-liter flat-four produces 175 hp at 5800 rpm and 174 lb-ft of torque at 4000 rpm, with the 3.6-liter flat-six good for 256 hp at 6000 rpm and 247 lb-ft at 4400 rpm. Expect a 0-60 mph time of just over 7 seconds for the 3.6R model, and unless you really want the 3.6R-exclusive HID headlights, we'd stick with the more efficient 2.5i.
As does the 2015 Legacy, the 2015 Outback has a much-improved interior. Our loaded 2.5i Limited model included high-quality faux wood trim, the latest version of the EyeSight active safety system, a navigation system with pinch-and-pull zoom functionality, and rear seats that recline and fold easily. Buyers who can afford more but still want a Subaru won't find a self-parking feature, panoramic moonroof, or multi-camera parking system, but the basics are all there. Once again, the Subaru Outback checks off enough boxes that it belongs on the shopping list of anyone who doesn't mind the wagon-like styling inextricably tied to the crossover's legacy. 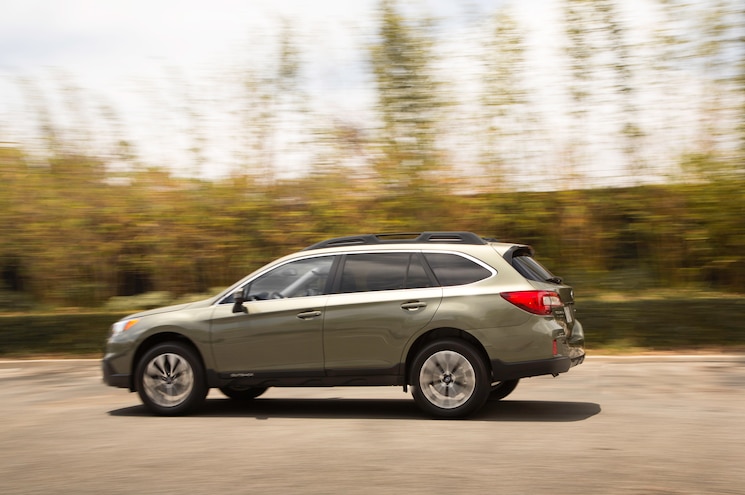