Still Competent After All These Years 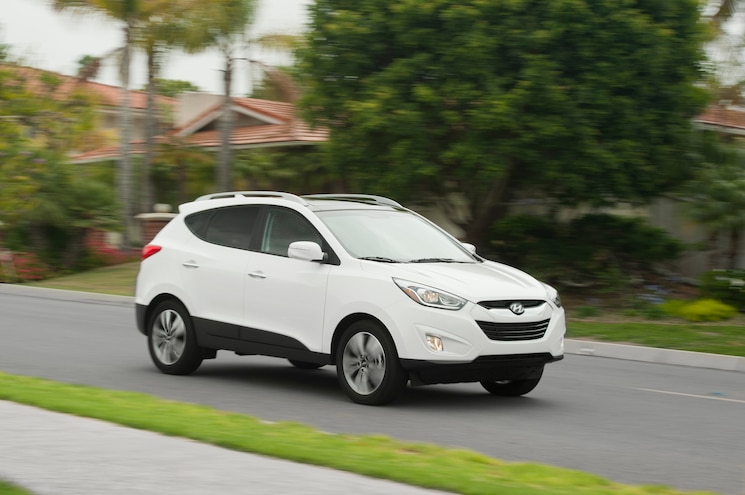 With only minor changes every year since its last redesign in 2010, the Hyundai Tucson gained more subtle updates for 2014 as well as a pair of new direct-injected engines. All-wheel drive also became available with the base 2.0-liter engine. Those new engines are said to be more powerful than the engines they replace. We hadn't been behind the wheel of the current generation Tucson since we gave our 2010 long-termer back to Hyundai -- until now.
The base engine in the 2014 Hyundai Tucson is the new 2.0-liter Nu GDI (gasoline direct injection) I-4 engine. With direct injection, the new engine makes 164 hp at 6200 rpm and 151 lb-ft of torque at 4000 rpm. Although peak horsepower is down slightly compared to the previous MPI (multi-point injected) 2.0-liter (165 hp at 6200 rpm), low-end torque has improved (146 lb-ft at 4600 rpm). The manual transmission has been dropped and all variants feature a six-speed automatic. Fuel economy has also improved slightly from 22/29 mpg city/highway to 23/29 mpg. With the now-available all-wheel drive, the 2.0-liter engine is rated 21/25 mpg.
Our 2014 Hyundai Tucson Limited FWD tester was equipped with the larger 2.4-liter Theta II GDI I-4. The new engine makes 182 hp at 6000 rpm and 177 lb-ft at 4000 rpm compared to the previous engine's 176 hp and 168 lb-ft at the same revs. Front-drive versions are rated 21/28 mpg, while all-wheel-drive models are rated 20/25 mpg. Those highway numbers are down compared to the old engine, which was rated 30 mpg and 27 mpg, respectively. 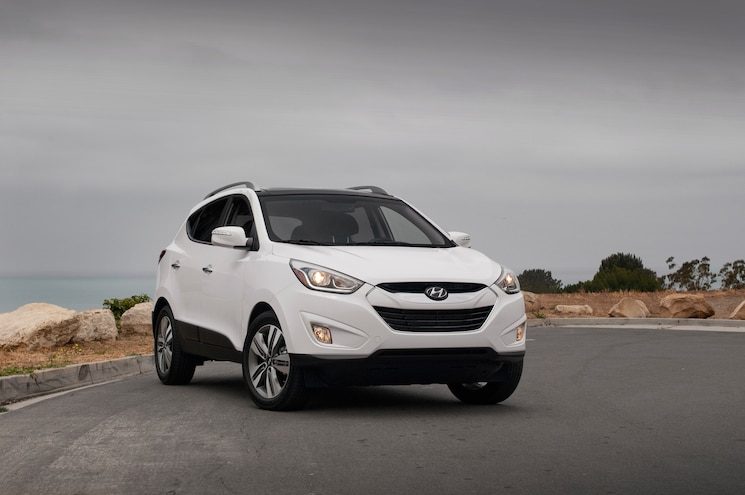 View Photo Gallery | 28 Photos
Photo 2/28   |   2014 Hyundai Tucson Limited FWD Front Three Quarters
Although our 2014 Hyundai Tucson Limited tester posted quicker acceleration times at the drag strip than our 2010 all-wheel-drive long-termer, the new model was front-drive only, so the times aren't directly comparable. The front-drive 2014 Tucson with the 182-hp 2.4-liter reached 60 mph in 8.2 seconds and finished the quarter-mile in 16.4 seconds at 84.3 mph. In comparison, the all-wheel-drive 2010 Tucson with the 176-hp 2.4-liter took 9.0 seconds to reach 60 mph and did the quarter-mile in 16.9 seconds at 81.4 mph. Both SUVs were equipped with a six-speed automatic.
Standard for 2014 is Hyundai's new Sachs ASD (Amplitude Selective Damping) suspension system. According to the automaker, the new suspension system improves ride, increases driving comfort without compromising handling, and optimizes surface contact. Despite the new suspension dampers, the front-drive 2014 Tucson pulled a lower lateral g around the skidpad (0.75 g vs. 0.79 g) compared to the all-wheel-drive 2010 model. The story was the same around the figure eight (28.8 seconds at 0.60 g vs. 28.5 seconds at 0.58 g). At 116 feet, the 2014 Tucson stopped 6 feet shorter than the 2010 model. 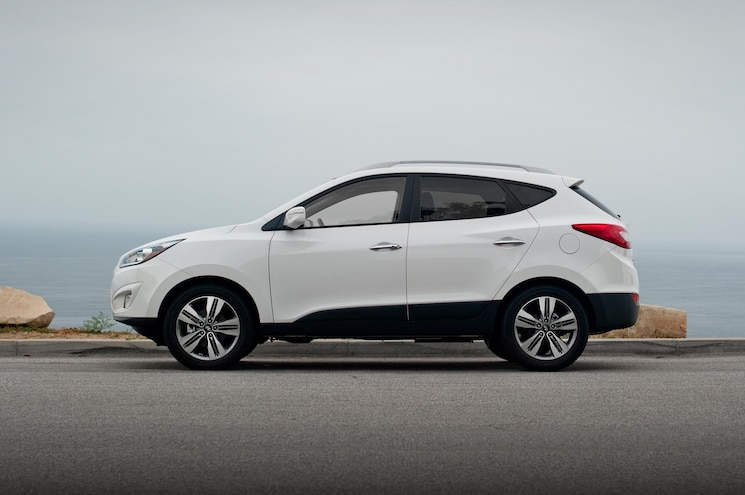 View Photo Gallery | 28 Photos
Photo 6/28   |   2014 Hyundai Tucson Limited FWD Side Profile
The Tucson's acceleration times are similar to those of the front-drive 2014 Mazda CX-5 Grand Touring (0-60 mph: 8.1 mph; quarter-mile: 16.3 seconds at 84.5 mph). Although not mind-bending (few models in this segment are), the acceleration felt strong enough to pull out into traffic or merge at the top of an on-ramp. Handling was also similar to the Mazda CX-5 (skidpad: 0.75 g; figure eight: 28.3 seconds at 0.56 g). While the Tucson posted slightly better handling figures than the Mazda, the CX-5 feels more confident in extreme driving conditions such as highway interchanges or dodging other traffic. In normal driving, the Tucson felt solid and rode comfortably.
Being a Limited trim level, our Winter White Tucson ($27,075 including $875 destination) came nicely equipped with a two-tone Black Saddle leather interior and the Technology Package ($2650) and carpeted floor mats ($125). Tucson Limited standard features include four-wheel discs with ABS, downhill brake control with hill-start assist control, 18-inch alloy wheels, chrome grille and door handles, automatic headlights and foglights, and power heated side mirrors with integrated turn signals. Interior features include proximity key with push-button start, heated front seats, leather-wrapped steering wheel and shift knob, dual climate control with air ionizer, and a tilt and telescoping steering wheel with audio controls. 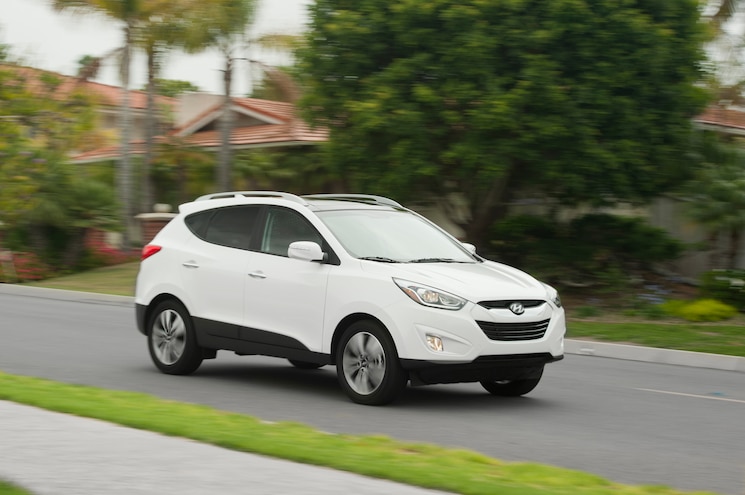 View Photo Gallery | 28 Photos
Photo 7/28   |   2014 Hyundai Tucson Limited FWD Front Three Quarter In Motion
The standard infotainment system features HD radio and Sirius satellite radio, iPad, USB and auxiliary inputs, Bluetooth phone, and Hyundai's Blue Link telematics system. The Technology Package adds navigation with a 7-inch touch screen (up from 4.3 inches), 360-watt audio system with subwoofer and amplifier, XM NavTraffic, LED taillights, and a panoramic moonroof. In total, the 2014 Hyundai Tucson Limited FWD with Technology Package (and carpeted floormats) came to $29,850.
The infotainment and technology bits are familiar Hyundai units and are user-friendly. Like other top-trim Hyundai models, the Tucson Limited features the technology that consumers want in a stylish vehicle. The interior is well laid out and comfortable with plenty of room for a pair of 6-foot occupants to sit in tandem. The black interior with saddle (brown) seats and door inserts give the Tucson a premium look and feel. The 2014 Hyundai Tucson Limited FWD with Technology Package is comparably equipped and priced for the segment and did everything we wanted it to during our week behind the wheel.
While the numbers match or beat the sportiest model (CX-5) in the segment, those seeking the most communicative feel might want to look at the Mazda dealer. For everyone else, the Tucson is a competitive choice. With its last overhaul in 2010, we expect the next-generation Hyundai Tucson to be just around the corner. Until then, the current model offers all the modern features demanded of customers in a stylish -- if dated -- wrapper. Look for the next Tucson to flaunt the automaker's latest Fluidic Design 2.0 as seen on the 2015 Genesis and Sonata sedans.