Glade Springs, West Virginia: The 2015 Ford Expedition isn't profoundly different. However, its enhancements endow it with many differences that are notable. Getting behind the wheel of the newest model on the tight, twisty, and undulating country roads of West Virginia was the perfect locale to evaluate the bigger power that comes from Expedition's smaller engine, as well as the handling improvements that make this truck-framed SUV that weighs in at up to three tons handle like a less bulky, more nimble crossover.
Following on the heels of the redesigned Lincoln Navigator—its upscale stablemate built on the same platform—the Expedition gets a refreshed exterior, an updated and quieter interior, a collection of new technologies, electronic power steering, a new engine with boosted power, and better fuel economy. The fullsize SUV has three rows of seating for eight and comes in two wheelbases, two-wheel-drive and four-wheel-drive versions, and four trims: XLT, Limited, King Ranch, and an all-new, top-of-the-line Platinum edition. The Expedition's top competitors, the Chevy Tahoe and Suburban, have been modernized recently, as well. 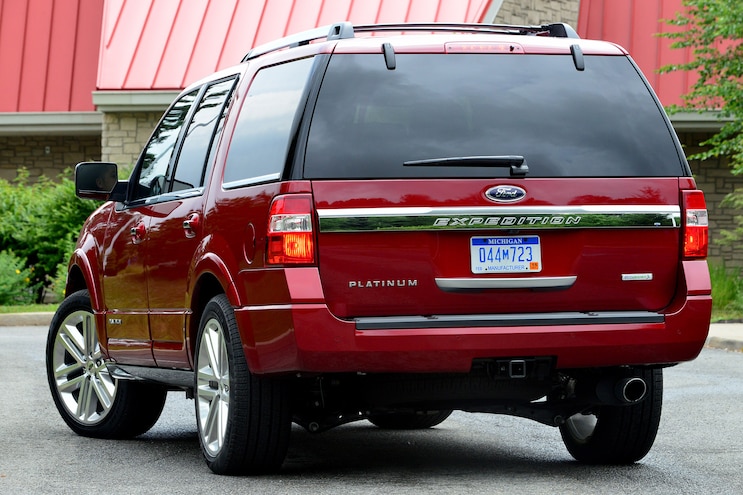 View Photo Gallery | 24 Photos
Photo 2/24   |   2015 Ford Expedition Rear End
"Customers still have a need for a traditional fullsize utility vehicle, and the new 2015 Expedition delivers what those customers are looking for," said Keith Wilson, Expedition marketing manager. "These are Ford's more affluent customers who won't compromise—They want space, performance, comfort and capability all in one impressive package."
Introduced in 1996 for the 1997 model year as a replacement for the Ford Bronco, the Expedition slotted between the Explorer and the Excursion, which was discontinued in 2005. The Expedition is one of a small number of full-sized, truck-based SUVs in today's market and is built on the chassis that underpins the F-150. While this segment of the overall vehicle market is a scant two percent, it still commands an important number of sales along with competition between the players, as these models not only ferry people but also tow up to 9,200 pounds, which is best-in-class. Of note, this is Ford's measurement and has not yet conformed to the SAE J2807 towing standard.
Observing the outside, the Expedition largely resembles the previous version, although changes front and rear modernize the utility vehicle and freshen its appearance. Available halogen projector headlights and LED fog/running lamps brighten the front. Changes to the back include a revised rear hatch and subtle-but-stately chrome exhaust tips. A new set of wheels is available, including a 22-inch polished-aluminum wheel package for Limited, King Ranch, and Platinum. The Expedition's two wheelbases are a 119-inch model that can stow 108.3 cubic feet of gear and competes directly with the Chevy Tahoe, and a 131-inch model that parallels the Suburban, offering what Ford says is best-in-class cargo space of 130.8 cubic feet. 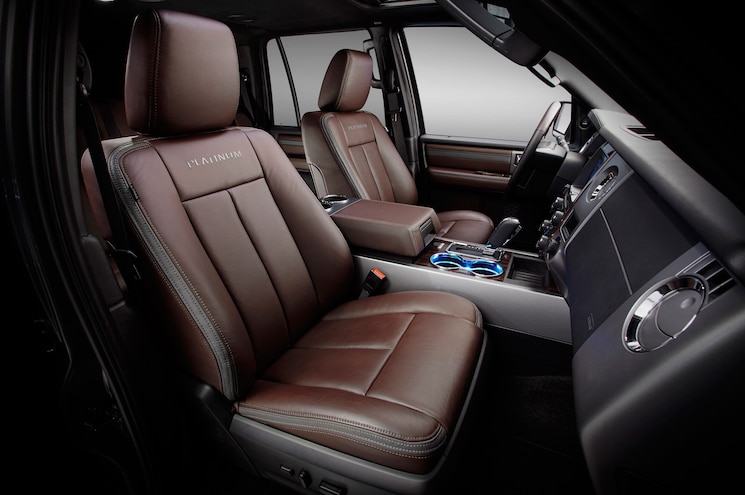 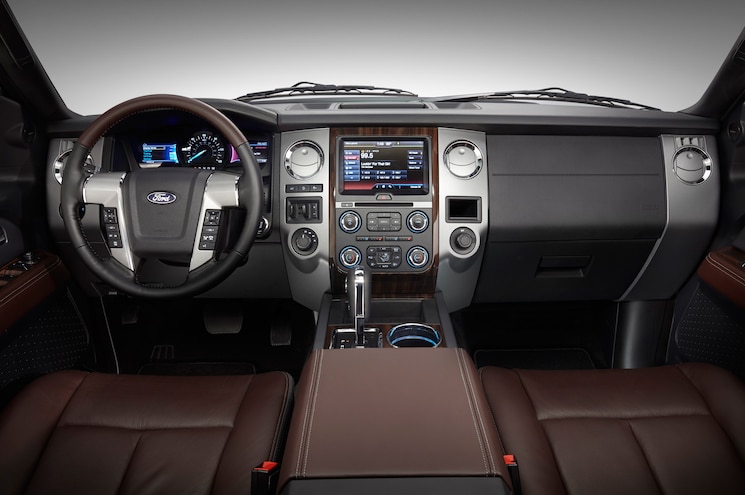 View Photo Gallery | 24 Photos
Photo 10/24   |   2015 Ford Expedition Dash
Designers incorporated different themes for each trim to reflect distinct customer lifestyles. The Limited has been penned as confident and elegant with refined and traditional accents and finishes, while the rugged King Ranch is still swathed in signature leather and tasteful King Ranch detailing. Platinum trims are treated with sophisticated styling cues and can be ordered with Brunello leather seats in a red wine color with tuxedo stripe accents and French stitching or tailored, plush Ebony leather with Agate Gray accents.
Additional features include Ford's blind spot monitoring system and rear cross-traffic alert, front and rear parking sensors, seven-color ambient interior LED lighting, and a Ford truck apps to help make trailer towing and off-road driving easier when equipped for towing with a trailer brake controller.
Under the hood of the newest Expedition is a single engine: The 3.5L EcoBoost V6 with direct injection and twin turbochargers that has been a hit in the F-150 pickup. It generates 365 hp and 420 lb-ft of torque and provides more power, performance, and fuel efficiency than the 5.4L V8 used in the current generation model (it has 55 more horses and 55 lb-ft of torque). The engine is matched to a six-speed SelectShift automatic transmission, with a manual mode that allows you to use a shift-mounted rocker switch to select a desired gear. 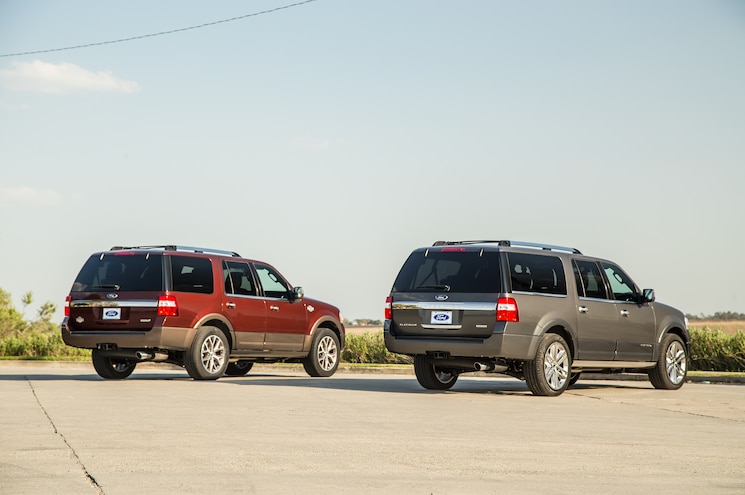 View Photo Gallery | 24 Photos
Photo 14/24   |   2015 Ford Expedition Rear Three Quarter
We drove the 2015 Expedition over a course of some 150 miles comprised largely of winding roads along with a small portion of highway driving. The first thing we noticed was its quietness and well-appointed, tasteful interior, with great entry, exit, and driving ergonomics, plus good visibility. We were impressed by the new powertrain that delivers instant power on tap and the well-matched six-speed automatic transmission that allows you to hold gears, if needed. Most notable is the fully independent suspension that gives improved ride and handling—especially important on the roadways we traveled with no shoulder. This suspension also permits a more convenient fold-flat third-row bench seat and low load-floor height. Top of the list of likes is the continuously controlled damping suspension with three drive modes: comfort, normal, and sport. This is engineered with a suite of 46 unique body sensors that detect body, steering, and braking inputs and can automatically adjust damping in milliseconds. Ford explains that this technology analyzes the weight of the vehicle, steering feedback, and road undulations and reacts accordingly to help control wheel and body motions so passengers experience an orderly, comfortable ride. This suspension is a $2,180 option that brings 22-inch wheels, and we'd say it's worth the additional price.
The Expedition also uses Ford's electric power-assisted steering, which reduces steering effort, gives you better maneuverability at slow speeds, and improves feel at higher speeds. It also aids fuel economy as it operates more efficiently than traditional pump-driven systems.
Expedition's standard safety and security features include a six-airbag SRS system with 10-way occupant protection system. Other safety features include side-intrusion door beams, security approach lamps, SecuriLock with smart key and engine immobilizer, BeltMinder, three-point safety belts for all rows, post-crash fuel pump shut-off, tire-pressure monitoring system (TPMS), AdvanceTrac electronic stability control (ESC) with roll stability control (RSC), traction control system (TCS), and four-wheel, four-sensor, four-channel anti-lock braking system (ABS) with electronic brakeforce distribution (EBD) and emergency brake assist (EBA). 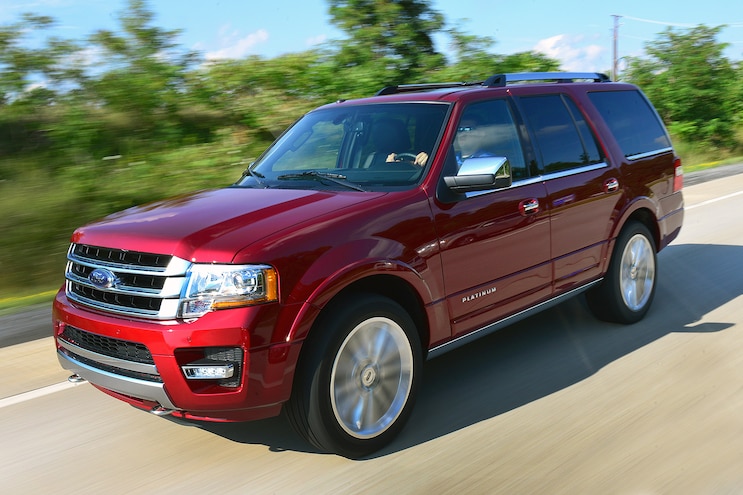