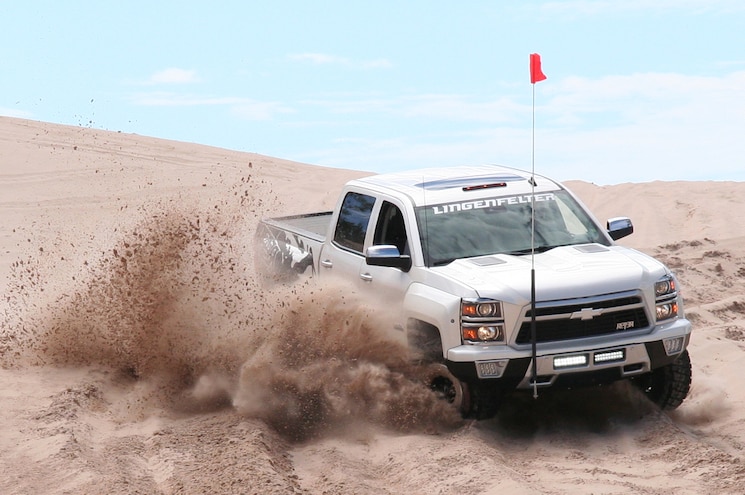 Four-wheel drive has been part of the fullsize-truck culture nearly since the inception of the segment more than six decades ago. However, for most of that time, the purpose has been mostly utilitarian, helping the trucks get out of mud and muck, up steep trails, and adding traction in slippery terrain. It took OEs decades more until they fielded truck models that legitimately catered to the off-road enthusiast market. The Dodge Ram Power Wagon blazed the trail with the revival of the historic name in 2005 and continues to be the gold standard for the traditional off-road fullsize truck. When the Ford F-150 SVT Raptor came onto the scene in 2010, it re-defined expectations for a factory off-road truck, with a custom front and rear suspension, Fox Racing bypass shocks at all four corners, and unique styling. The Raptor has been without a direct domestic competitor since its introduction. Thanks to the collaborative efforts of Lingenfelter Performance Engineering (LPE) and Southern Comfort Automotive, Chevy fans now have a credible rival to the Raptor with the Reaper off-road package, available through selected Chevrolet dealers.
Not Factory, But Turn-Key
Depending on your definition of “factory,” some might not consider the Reaper a direct apples-to-apples competitor to the Raptor, since it doesn’t technically roll off the line in Fort Wayne, Indiana, as-is. However, you can buy it through a Chevy dealer, including a supplemental warranty covering its custom parts. 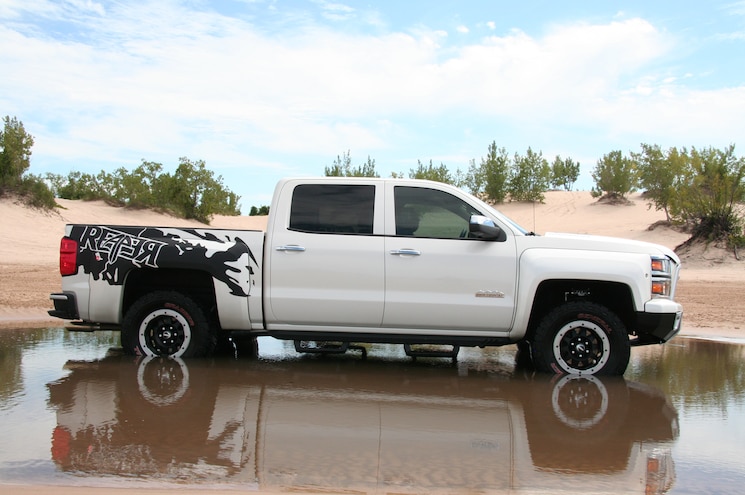 View Photo Gallery | 27 Photos
Photo 2/27   |   2014 Chevrolet Silverado Reaper Side Profile
Since we first saw photos of the Reaper earlier this year, our interest was piqued. LPE is a well-known and respected name in the General Motors performance world, and for good reason. The company has decades of experience making Camaros, Firebirds, and Corvettes ludicrously fast, as well as having a reputation for rock-solid reliability. With fullsize truck sales near all-time highs, the company has lately diversified into the truck and SUV performance market, a natural extension, since the trucks’ V-8s share much of their hardware with the Gen IV and V Corvette engines.
At first glance, it would be easy to dismiss the Reaper as just a bolt-on restyling package for the Silverado. While it’s true that many of the items included in the Reaper package are cosmetic, the transformation goes far further than just skin deep. LPE Vice President of Operations Mike Copeland said an extensive amount of time was spent on tuning the custom remote-reservoir Fox Racing shocks on the Reaper, not coincidentally, the same supplier that builds the shocks for the Raptor. Ride Tech, a company with extensive experience building military-spec suspension components, supplies the front lower A-arms.
LPE claims 9.2 inches of front, and 11.2 inches of rear suspension travel on the Reaper. On-paper, this is less than the Raptor’s claimed 11.2 inch front and 12.1 inch rear of travel. That said, Copeland said LPE was unable to duplicate Ford’s claims in benchmark testing of the Raptor while the Reaper was under development. Although the Reaper’s suspension travel claims may seem conservative at first glance, Copeland stands behind the claims with confidence, saying the truck will deliver what’s promised. 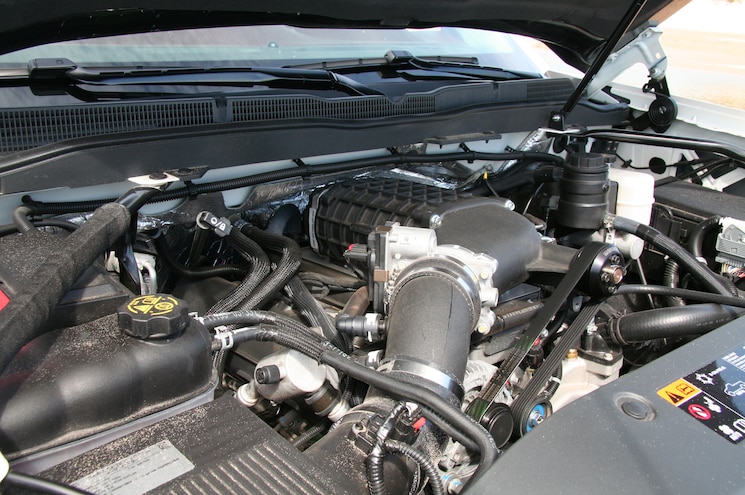 View Photo Gallery | 27 Photos
Photo 6/27   |   2014 Chevrolet Silverado Reaper Engine View
Ready to Rumble
The time invested in suspension research and development shows when driving the Reaper off-road in sand. The truck handled the whoops of the West Michigan dunes with poise and confidence, only rarely maxing out its wheel travel while driving at speed. And speed is definitely not a problem with either of the Reaper’s two supercharged engines, available in 5.3L or 6.2L displacements. Even in “base” 5.3L form, the Reaper has a 64-horse edge over the factory Raptor and a decisive 139hp advantage with the 6.2L. Our truck was equipped with the 6.2L engine and one of the louder exhausts we’ve heard in recent memory. Our particular tester had a combination of optional headers and exhaust tuned for a truck equipped with stock manifolds, making it especially boisterous.
While fun on the dunes and off-road, it required judicious restraint of the right foot to prevent attention from bystanders, both wanted and unwanted. The particular exhaust tuning combination on our tester might have been a little too loud for many buyers. Accelerating at what most would consider a “normal” pace elicits a machine-gun staccato from the dual exhausts and attracted the glance of law enforcement during our drive, but we thankfully avoided a citation. Copeland assured us several exhaust tuning options will be offered, from a subtle rumble to the heavy-metal crackle of our tester.
The combination of the improved suspension and abundant power made for lots of fun driving at the Silver Lake, Michigan, sand dunes, and climbing the hill in the dunes recreational area was no sweat, with the supercharged L86’s plentiful power and torque powering it uphill with ease. On-road, the supercharged V-8 propelled the Reaper up to triple-digit velocities with unnerving ease. If driven reasonably, Copeland said he’s seen up to 17 mpg highway in the Reaper, impressive considering the amount of power, and the added drag from its higher stance and more aggressive styling. 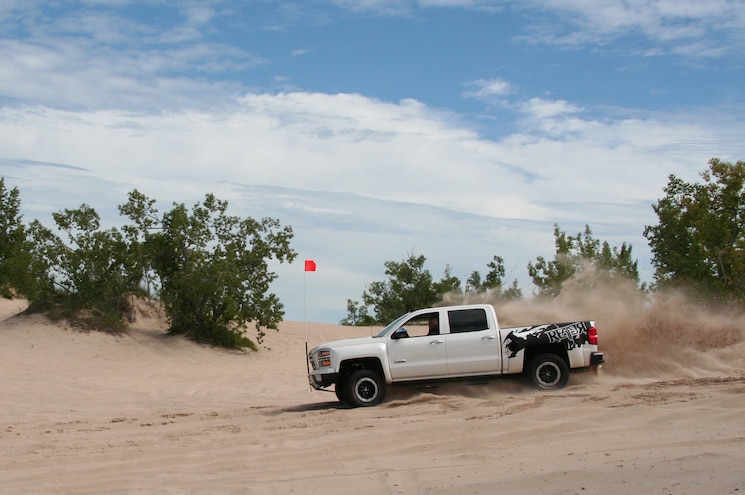 View Photo Gallery | 27 Photos
Photo 10/27   |   2014 Chevrolet Silverado Reaper Side View
Left mostly unchanged in the Reaper transformation is the interior, which in our case was the High Country model, meaning comfortable tan leather seats and plenty of bells and whistles. Custom-stitched headrest covers are available as an option. The only visible changes, other than a custom red-backlit gauge cluster, are the addition of a couple of auxiliary switches for the Reaper’s bumper-mounted LED off-road lights. The custom bumper makes a huge difference in the truck’s off-road capability and ease, ditching the stock Silverado’s ultra-low bumper and air dam. The bumper complements the Reaper’s eagle-like hood and grille treatment. Front and rear boxed fender flares complete the look, along with rear fender graphics and Reaper tailgate badging.
Love It or Hate It, You Can’t Ignore It
The Reaper’s styling transformation is polarizing, to say the least. But it definitely gets stares wherever it goes. For those that like the Reaper’s performance enhancements, but are a little more ambivalent about the styling, Copeland hinted a Reaper-style package might be offered soon for the GMC Sierra, which we think might lend itself better to a more aggressive styling treatment.
The other advantage of the Reaper package is that it can be installed on any variation of Silverado 1500, from the regular cab short-bed to the double and Crew Cabs. Starting with the high-buck High Country trim, our particular truck would probably roll out of the showroom upward of $70,000. That may seem like a staggering sum for a pickup, but when a well-equipped Tahoe or HD diesel goes for that much or more, it puts the value equation in perspective.
If you’re a die-hard Chevy fan and want a truck that can legitimately hang and perform with your buddy’s Raptor, the Reaper is a solid effort that won’t disappoint. It doesn’t come cheap, but exclusivity has its price. LPE says it will build as many Reapers as there’s demand for, but it will be a long time, if ever, before Reapers become as common as Raptors, which have been out for four years now. If you’re interested in getting a Reaper of your own, visit reaperperformanceusa.com for more information and to find an authorized dealer near you. 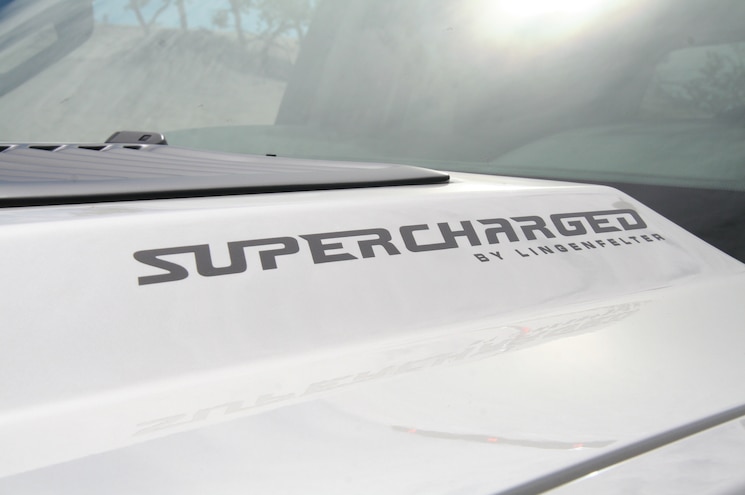 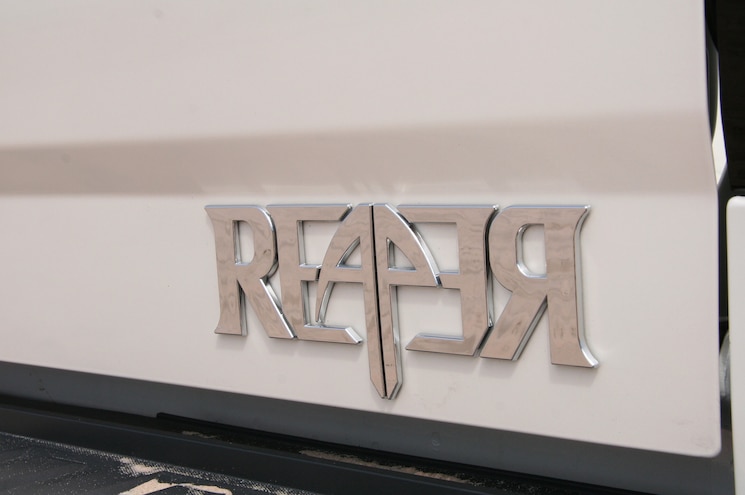