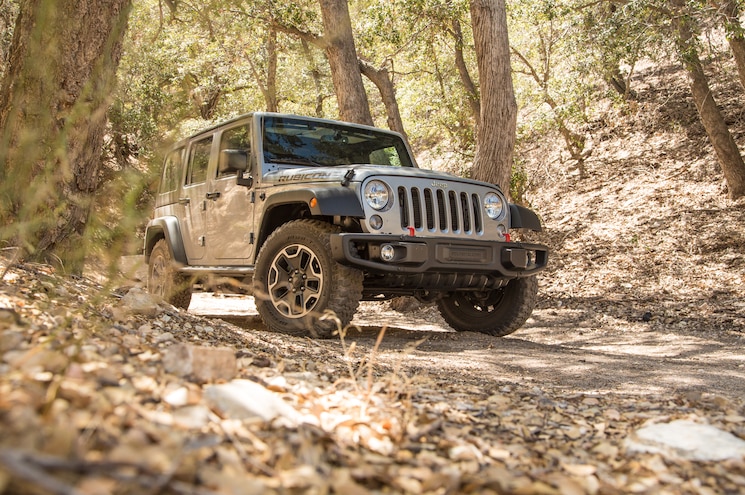 In popularity contests between the 2014 Jeep Wrangler and the new Cherokee, the iconic Wrangler still wins. At least that's how it recently panned out on our Instagram account where a photo of the Wrangler snagged 2927 likes versus 2760 likes for our long-term Cherokee Trailhawk (and the Cherokee was muddier!).
The Wrangler earned that love from decades of proving its mettle on the dirt. It's capable of tackling rough terrain and it can do so right out of the box, especially when it's decked out in Rubicon trim. The Wrangler Rubicon gets its name after the Rubicon Trail that borders Lake Tahoe, one of the most challenging off-road courses in the country, where Jeep engineers do much of their testing. It's fitted with the basic and essential modifications that most off-road enthusiasts would make, which is perfect for beginners or casual off-roaders who'd rather skip the Wrangler's extensive aftermarket world and go straight to the trails. 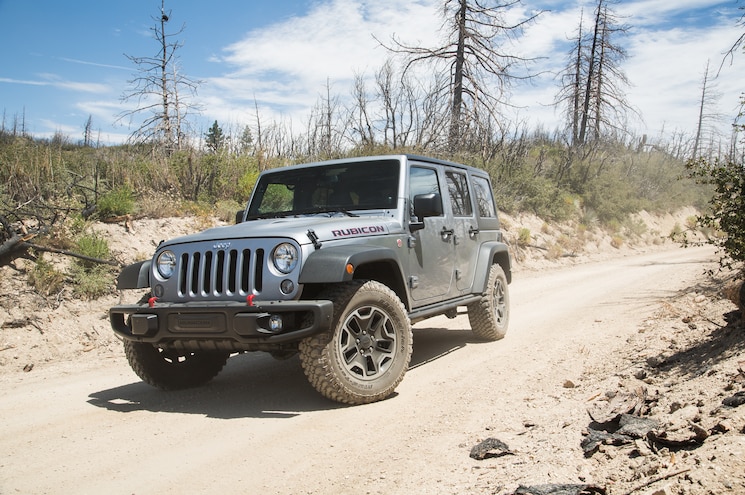 View Photo Gallery | 44 Photos
Photo 2/44   |   2014 Jeep Wrangler Unlimited Rubicon X Front Three Quarters
For starters, the Wrangler Rubicon rides on robust Dana 44 front and rear axles, while all other Wranglers get a Dana 30 axle up front. The Rubicon is also fitted with front and rear locking differentials, a low gear (4:1) transfer case, an electronically disconnecting front sway bar, and rock rails to protect the rocker panels.
Our tester 2014 Jeep Wrangler Unlimited Rubicon X had all that and more thanks to that "X" at the end. The Rubicon X package is somewhat pricey at $4100 and essentially a carbon copy of the features list found in the 2013 Wrangler Rubicon 10th Anniversary Edition (commemorating the Rubicon trim's milestone), sans the anniversary badges. You can spot X-package Rubicons thanks to a number of red exterior accents such as the front and rear tow hooks and the Rubicon hood decals. Also included are steel bumpers, a power dome hood reminiscent of the SRT Grand Cherokee, and a long list of interior upgrades.
Before letting it loose on the dirt, we took Wrangler to the track for a quick round of testing. The 2014 Wrangler is still powered by the stout 3.6-liter Pentastar V-6 that makes 285 hp and 260 lb-ft of torque. Our tester's engine was mated to the optional five-speed automatic ($1295), but a six-speed manual is also offered. The powertrain pulled the 4717-pound off-roader from 0-60 mph in 8.6 seconds and reached the quarter mile in 16.6 seconds. The Jeep's 30.8-second time around the figure-eight course isn't surprising given its high ride height and BFGoodrich mud tires. The Wrangler's on-road characteristics don't surprise either. While stable at speed, its slow steering response will make you second-guess any aggressive lane changes. It'll dive under hard braking, and the roar from those big knobby tires will make it near impossible to have conversations using your library voice. However, these are relatively minor trade-offs for off-roaders. 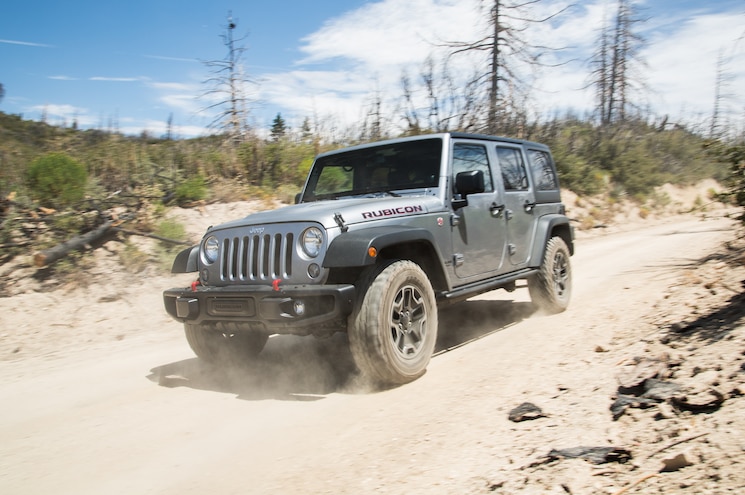 View Photo Gallery | 44 Photos
Photo 6/44   |   2014 Jeep Wrangler Unlimited Rubicon X Front Three Quarter In Motion 02
Next, it was time to put the Wrangler in its natural habitat so we headed to the Hungry Valley State Vehicle Recreation Area about an hour north of Los Angeles. Trails here are nicely marked by difficulty and it didn't take long to realize that the easy and intermediate trails were a walk in the park for the Rubicon. That said, the Jeep was pretty much unstoppable on the difficult trails, too. One of the first trails we encountered was tight and curvy, but the relatively narrow Wrangler snaked its way through unscathed -- that likely wouldn't have been the case for bigger rigs such as the Ford Raptor.
Another section littered with deep ruts and crevices also proved to be no match for the Wrangler. Here, simply pushing a red button to the left of the steering wheel disconnected the front sway bar in seconds and provided more suspension articulation up front. The front wheels rarely lost traction and, better yet, disconnecting the sway bar softened up the ride through bumpy and neck-snapping parts of the trail.
At the end of the day, we left the trails with big smiles and no drama to report. Our particular Wrangler was outfitted with luxuries like leather seats, automatic climate control, and a touchscreen infotainment system, but this Jeep is far from a softie. Because underneath those niceties and removable doors is a honest and pure SUV that will continue to win over off-road fanatics' hearts for a long time.

- OF
By Erick Ayapana
254 Articles