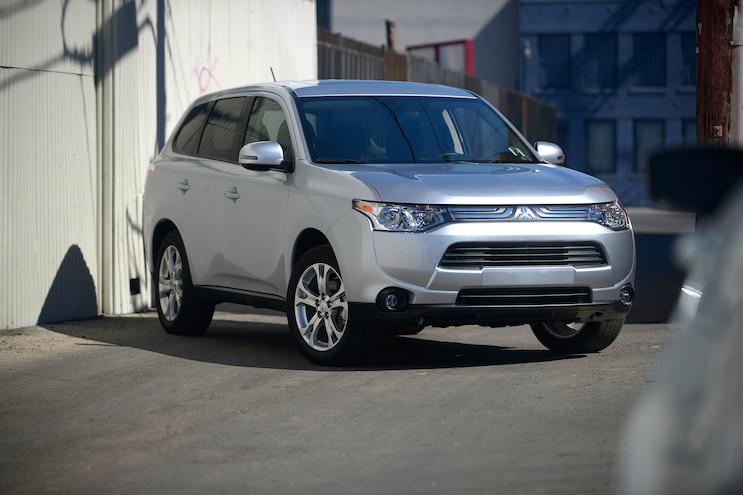 This Mitsubishi was not nearly as polarizing as our former long-term 2011 Outlander Sport, but the 2014 Outlander had to deal with much of the sentiment left over from the junior's lackluster time in the MT garage. While the 2014 model didn't wow most of the staff, it did make some headway repairing the Outlander's reputation through its dependability, redesign, and value.
Our $32,720 Outlander came with a base MSRP of $26,620 but we added the $6100 SE Touring package with navigation, power sunroof, heated leather seats, a premium sound system, and additional safety features including lane departure warning, adaptive cruise control, and a forward collision mitigation system.
I could have done without the lane departure warning. I was never once glad to have it and I always turned it off after the first beep. Forward collision mitigation gave me a feeling of security during my numerous hypnotic stop-and-go commutes to work, and more than once its alerts popped me out of my driving daze. I thankfully never triggered the automatic braking. 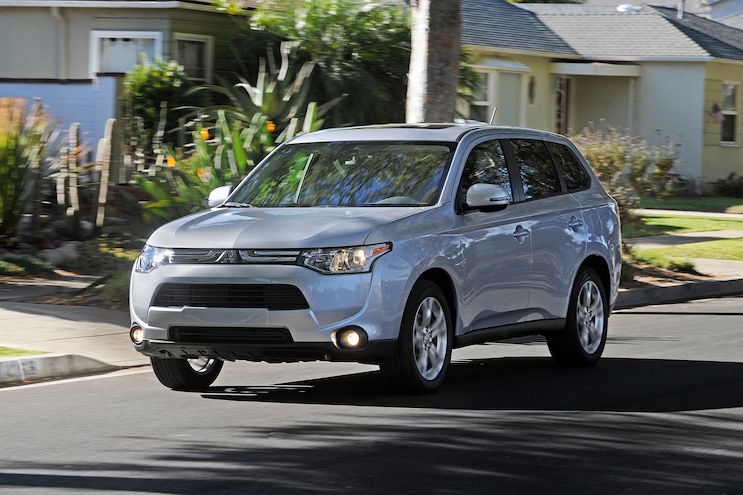 View Photo Gallery | 20 Photos
Photo 2/20   |   2014 Mitsubishi Outlander Front Three Quarters In Motion
I asked our Motor Trend archivist, Thomas Voehringer, to hit the road in the Outlander for a family vacay and he appreciated the adaptive cruise control. "You could set the cruising speed and following distance, then electronically latch onto the driver in front of you," Voehringer said. But he warned, "Choose wisely because their ability to drive consistently is immediately reflected in your ride. If they slow, you slow. If they speed up, you will speed up (until the max speed is reached)." He added: "Over thousands of miles the ACC was a better way of accelerating than using the throttle. It was smoother, and more efficient."
So two out of three for added safety isn't bad. You can't disable the lane departure warning system permanently -- you have to do it every time you restart the vehicle. A small annoyance that compounds over time.
The exterior redesign was a positive change. Kudos to the all-new front. Replacing the previous large, snub-nosed rectangular grille with a less severe horizontal intake and adding handsome swooshes to the traditional diamond logo on the front gave it an air of futurism. While the Outlander didn't turn many heads, it also didn't elicit negative reactions. If the goal was to reach a kind of 72-degrees-and-sunny design sweet spot, this might be it—not radical and not boring, a classic, rounded design that vaguely resembles some Land Rover styling. For sure, a step in the right direction.
Driving solo I never had any problems with speed and acceleration. The four-cylinder Outlander won't blast off the line to win any drag races (opt for the V-6 GT if that's your thing), but unlike some vehicles it can get up to highway speed and maintain it without much whining. Voehringer, who had five passengers with him, agreed, and suspects any complaints stem from the transmission. "Reports of it being less than sporting may be unfair. It seems to be more a result of the CVT than the engine. Once at cruising speed the Mitsu shuttled us at 75-80 mph without sounding or feeling overworked, and even allowed for effortless passing when needed," Voehringer said. 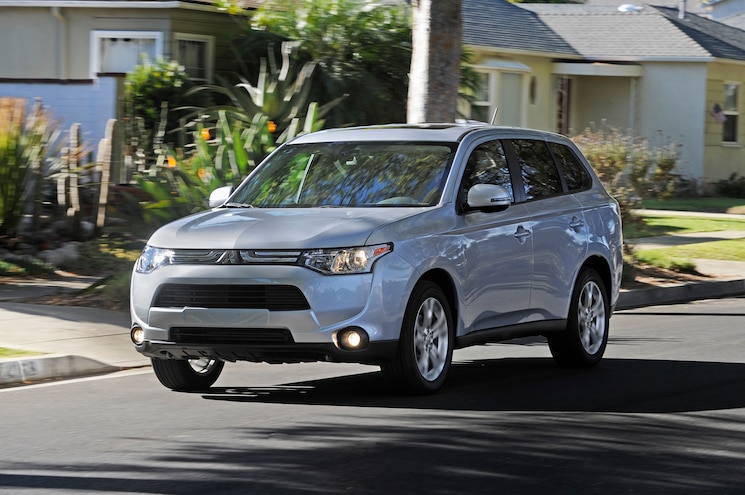 View Photo Gallery | 20 Photos
Photo 6/20   |   2014 Mitsubishi Outlander Front Three Quarter
Average fuel economy was 24.0 mpg, yielding 320-350 miles per tank. That meant I was filling up every seven to 10 days -- an acceptable frequency for a commute of 50 miles per day.
The interior is comfortable and easy to settle into. The driver's seat had enough bounce, cushion, and legroom to keep me comfortable after long hours in the cockpit. Most everything I needed was easily accessible and well-laid-out. After some time, I completely relied upon the steering wheel controls to adjust the volume, radio tuning, and track selection. On the entertainment display the buttons for changing the volume on the previous Outlander were replaced with a trusty volume knob. Hallelujah.
For passengers other than the co-pilot, the backseat can easily handle three across, provided you're not transporting a football team. For regular and slightly larger than regular-size humans it's a comfortable ride. The third row, however, is probably best used for kids or your contortionist friends. It can seat two adults, but they need to sit at an angle. Not recommended for trips longer than 20 minutes. 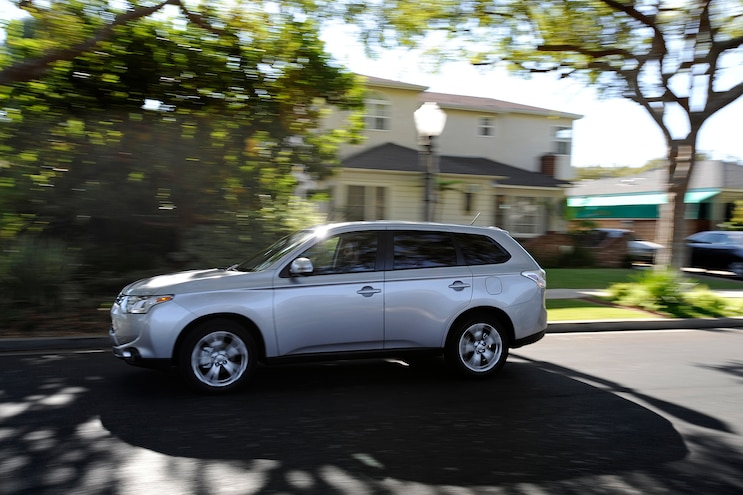 View Photo Gallery | 20 Photos
Photo 7/20   |   2014 Mitsubishi Outlander Drivers Side In Motion
Some of the technology let me down quite a bit. Using an iPod via USB cable just did not work; the on-screen display for Bluetooth streaming generally froze after a song or two—the music played, but the interface was frozen. Occasionally the guidelines for the backup camera did not appear. Minor problems, sure, but as a consumer I want the little things to operate correctly. Aside from the glitchy tech, nothing broke and nothing wore out.
About midway through the loan we swapped the OE Toyo A24 tires for a set of Nexen N'PRIZ RH7 to see if the larger Outlander was missing out on anything. Our assessment: The two tires are evenly matched, delivering comparable levels of ride comfort and surefooted handling. That said, per TireRack.com, the Nexen ($124) is not only a bargain compared with the Toyo ($247), but also boasts a higher treadwear rating (440 versus 300).
I took the Outlander into the shop for three routine service checkups, which cost a total of $371.15.
So after a year and more than 24,000 miles, I'm ready for a new vehicle -- and that's easily the best judge of whether a vehicle wowed me or not. The small technology annoyances would have really made my blood boil if I purchased this Outlander new, and, while its power was enough for me, I'd be leery of suggesting a friend drop $32,720 on the Mitsubishi. Still, this Outlander did a lot to clean up its name, and for that it was a productive loan.
More on our long-term 2014 Mitsubishi Outlander SE S-AWC: 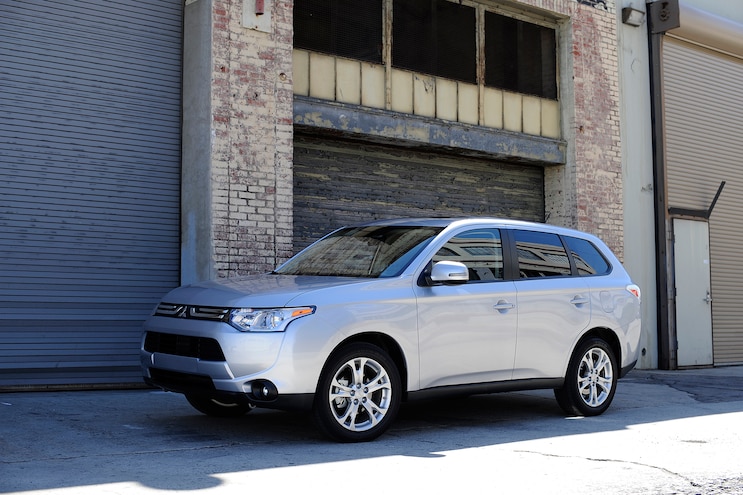 - OF
By Mike Royer
21 Articles